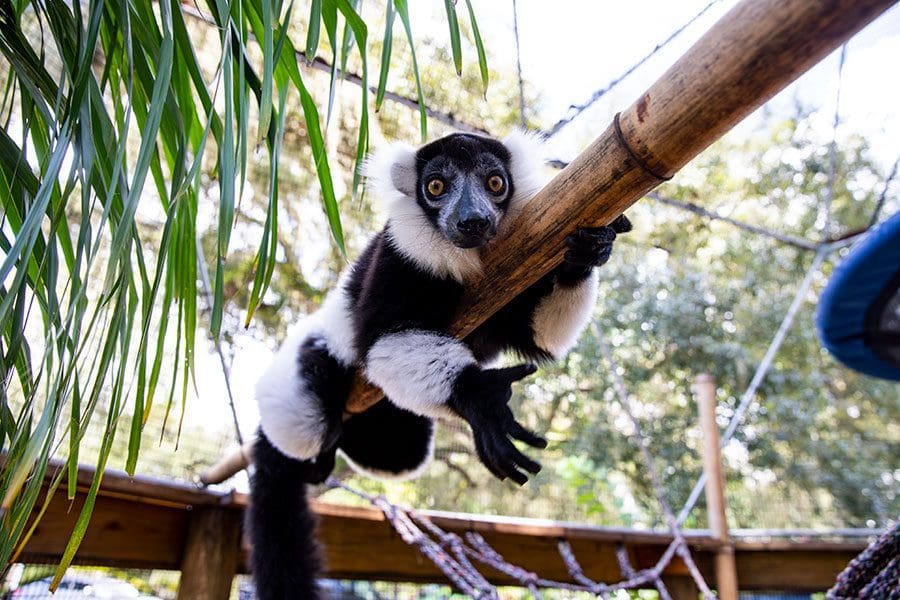 For 11 years in the breeding facility, year after year, Zeus and Athena had their babies taken from them.

Unfortunately, that’s the life many endangered primates are forced to live, as laws regarding the breeding and selling of exotic pets are fairly lax in Central Florida. Lemurs are a legal pet to own with a Class III permit. “Florida residents 16 years of age and older may apply for permit to possess, exhibit or sell Class III wildlife. A permit is not needed to possess certain Class III wildlife as a personal pet,” according to myfwc.com.

Today, Zeus and Athena have a happy family life at Chase Animal Rescue Sanctuary in Webster, where the black-and-white ruffed lemurs live with adopted baby Toko.

Primates like lemurs and marmoset monkeys, otherwise known as “finger monkeys,” are often bred in the pet trade industry for people to purchase, which is legal in Florida. When Chase Animal Rescue acquires a new lemur, the goal is to make sure the animal’s social dynamics are fulfilled, as they would be in their natural habitat of Madagascar.

“We neuter the males. We also take in surrendered pets, (from) the people that spend $4, 5, 6 grand on a baby (lemur),” says Nina Plail, who runs the sanctuary with the help of her partner Donna Vassallo, and many volunteers. 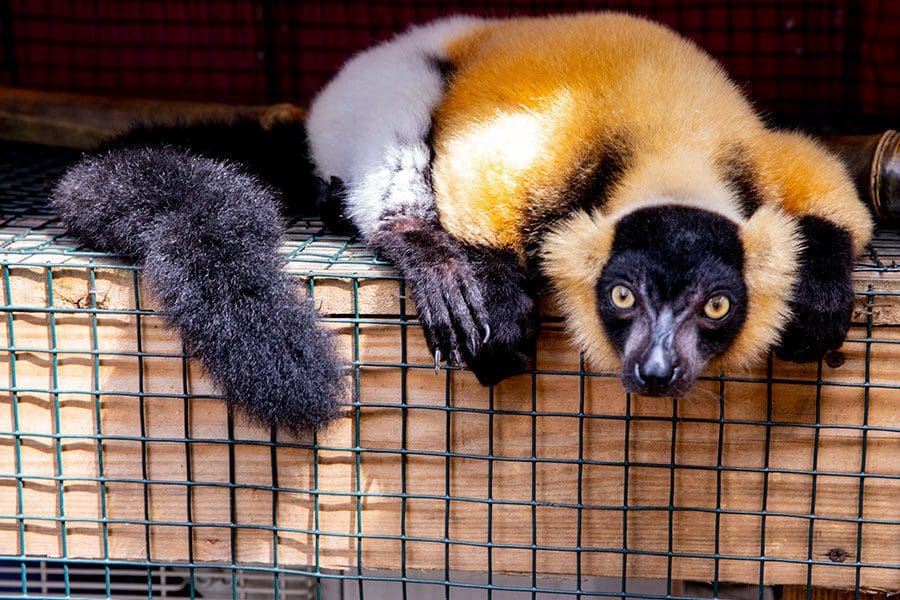 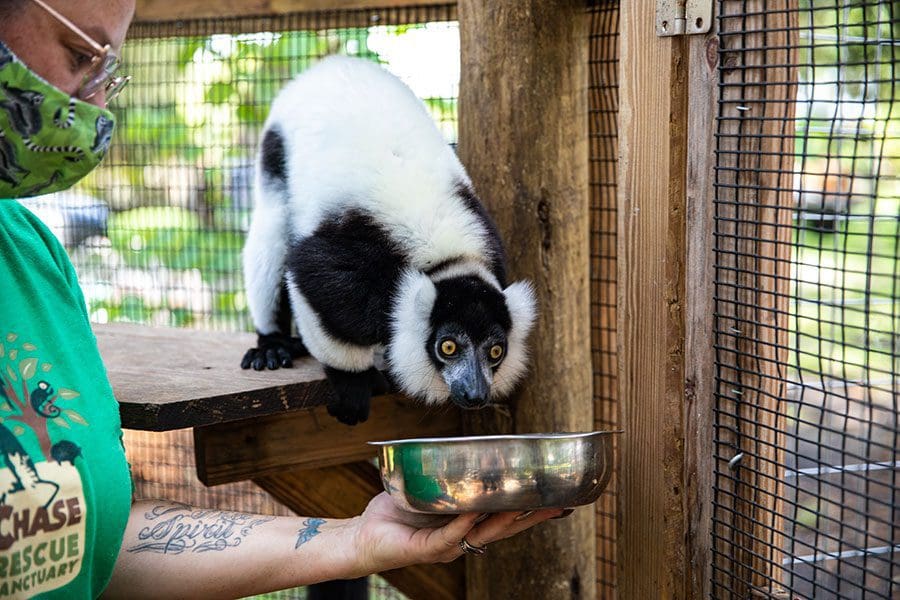 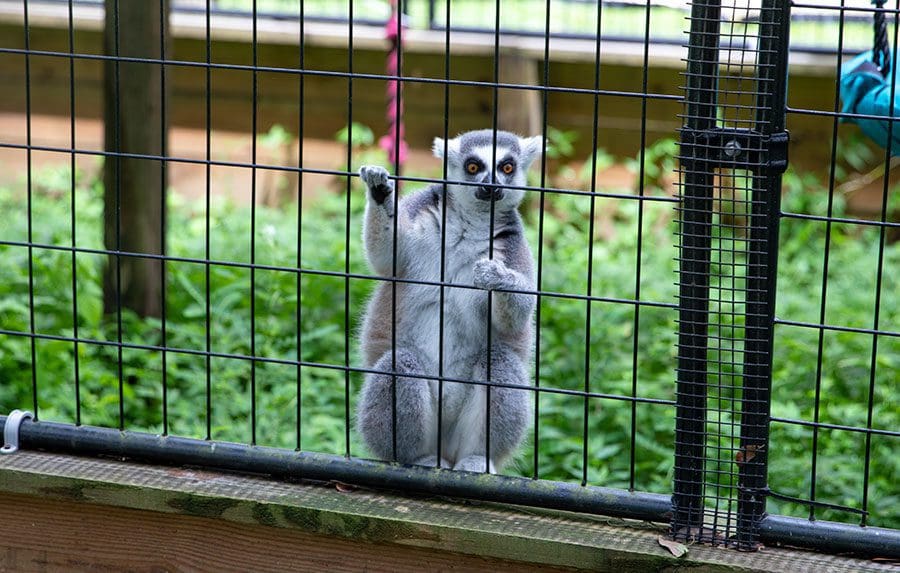 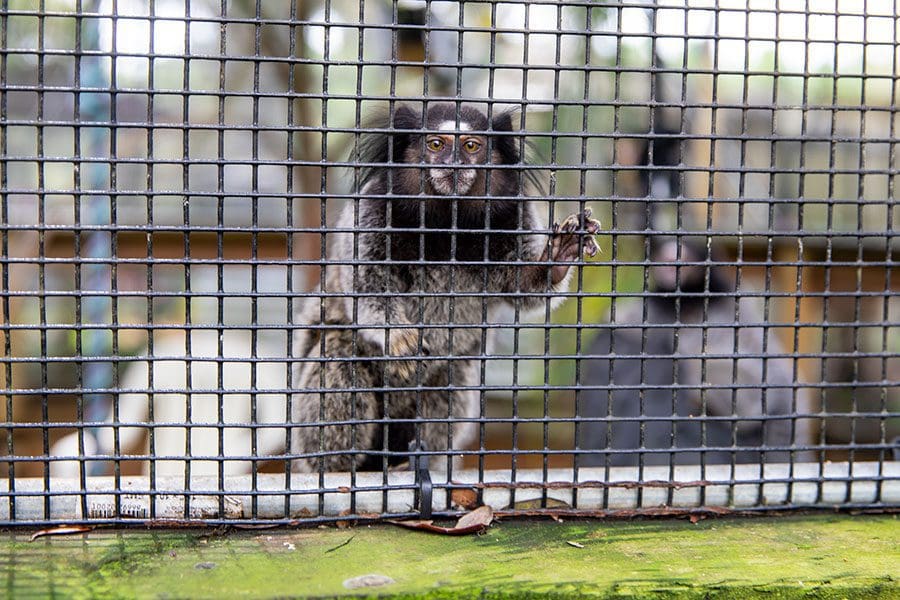 33 of the over 100 species of lemurs are critically endangered. In fact, only about 2,000-2,400 ringtail lemurs remain, according to conservation.org.

“What happens after people spend a ton of money to get them as pets is around age two when the hormones kick in, they get very aggressive. So, we have a whole ward of them that have put people in the hospital,” Nina says.

The rescue started about 12 years ago with dogs and cats, but the arrival of Tracy, a lemur, changed everything. “When Tracy came in, she just kinda changed the tide for us,” Nina says. “We kinda fell in love with her, we learned how to take care of her, and then people learned that we do lemurs, they sent a couple to us, and from there it’s grown.”

Tracy, believed to be the oldest lemur on earth at 38 years old, still resides at the sanctuary. The typical lifespan of a lemur is 25 years. “She’s super cool, she’s everybody’s favorite. When the volunteers make food in the morning, they open the window and she goes in and helps herself to whatever she wants,” Nina adds.

When Nina and Donna first got Tracy, they learned about lemurs and their fate, and that they’re critically endangered and about to go extinct. Trees cut down for logging in their habitat of Madagascar have wiped out their home, and the animals are also still hunted for bushmeat. Nina and Donna learned about the robust pet trade and slowly grew into becoming a home for rescued exotic pets. 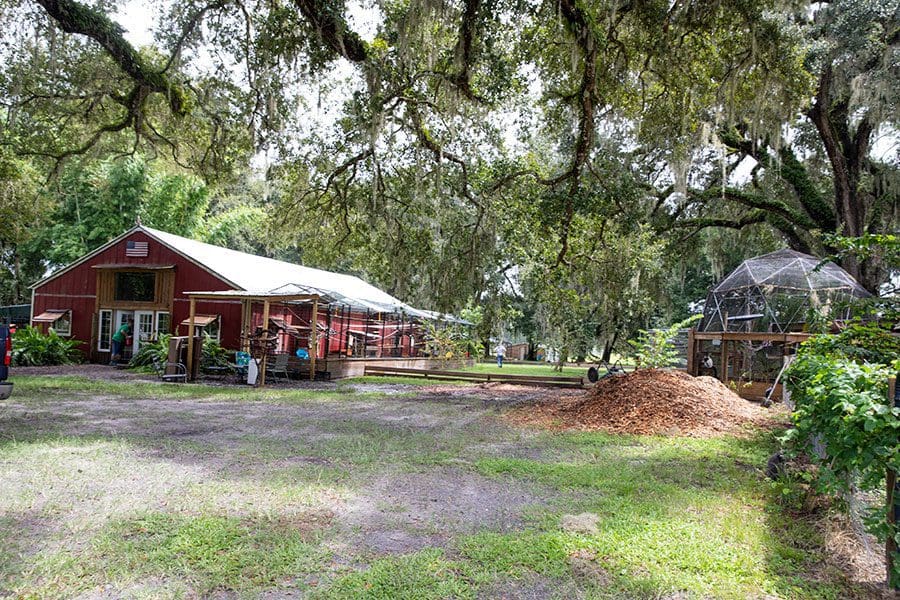 “About two years ago we really started becoming known as the place where if you have a wayward lemur, we’ll take it,” Nina says. There are currently 28 lemurs living at Chase Rescue Sanctuary. “People reach out, sometimes FWC (Florida Fish and Wildlife Conservation) reaches out if they have one that bites and someone gets hurt, they’re either gonna put it down or send it somewhere like this, so that’s where all these guys came from,” she adds.

There is also a feral cat colony that the rescue takes care of. “Cats just show up here or get dumped here. We spay or neuter them and then we let them live here,” Nina says. There are also a few antelope that were meant to go to a game farm where people will go to “hunt” so they can put the head on their wall and pretend they went to India. And, they have a three-legged deer that will live out the rest of his life with them. He’s 9 years old and came from another sanctuary that closed. “We also have some raccoons that we rehabbed and then we released them, but they don’t always wanna leave,” Nina says, as she introduces me to raccoons named Thelma and Louise.

Chase Animal Rescue Sanctuary is also home to 32-year-old Rufus and seven additional African Sulcata tortoises. Rufus was raised in a loving home from a baby, about the size of your hand, and now tips the scales at nearly 100 pounds. Rufus came to the sanctuary when his owner got cancer. “These guys are really personable, and his owner’s biggest concern was what’s gonna happen to Rufus. So, she sent him here. He’s been here about eight months, he’s doing really well,” Nina says. 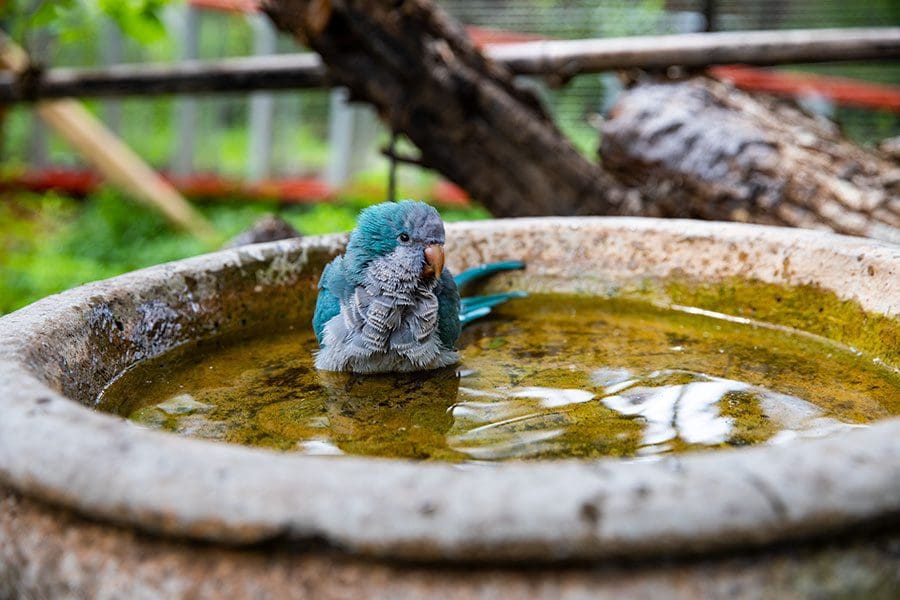 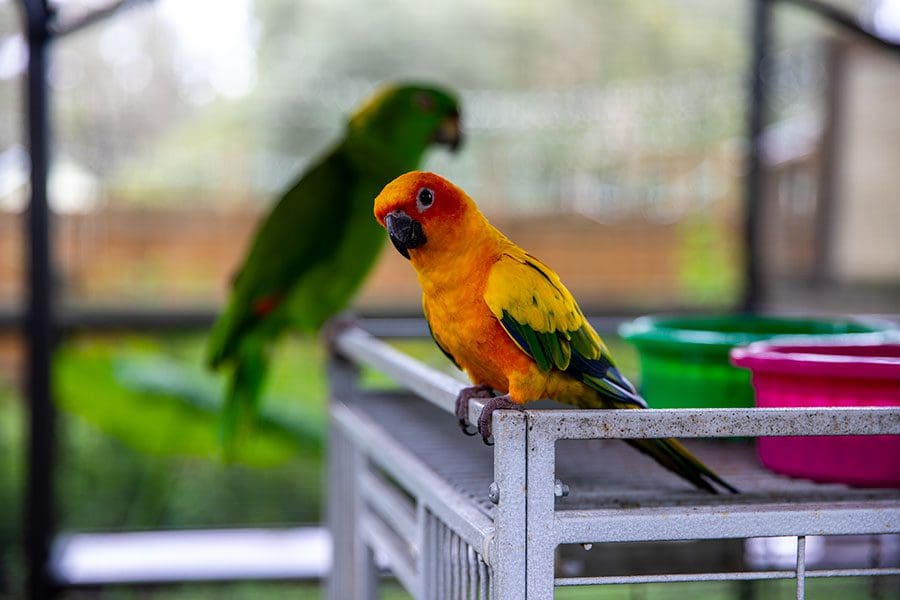 There are also four big birds – including cockatoos, amazons, and macaws, which are beautifully colored – and mini pigs. “That’s the other thing people do cause it’s cute. They get little piglets that “oh it’s so cute,” and then they end up being a couple of hundred pounds, they’re huge. We have three of them in the back that were people’s mini pig pets and they’re probably 600 pounds or something,” Nina says.

Many of the animals at the sanctuary, including the bigger birds and tortoises, came from owners who became terminally ill. They will usually send the animals before they pass, and many still come to visit while they can. One owner continues to visit his bird often.

“Humans are a little shortsighted. You see an adorable little baby primate, and they will cling to you and coo, and drink the bottle. I mean, it’s the cutest thing on earth, anyone would want one. And if you could end up having an extra $5,000 then you can get one,” Nina says. 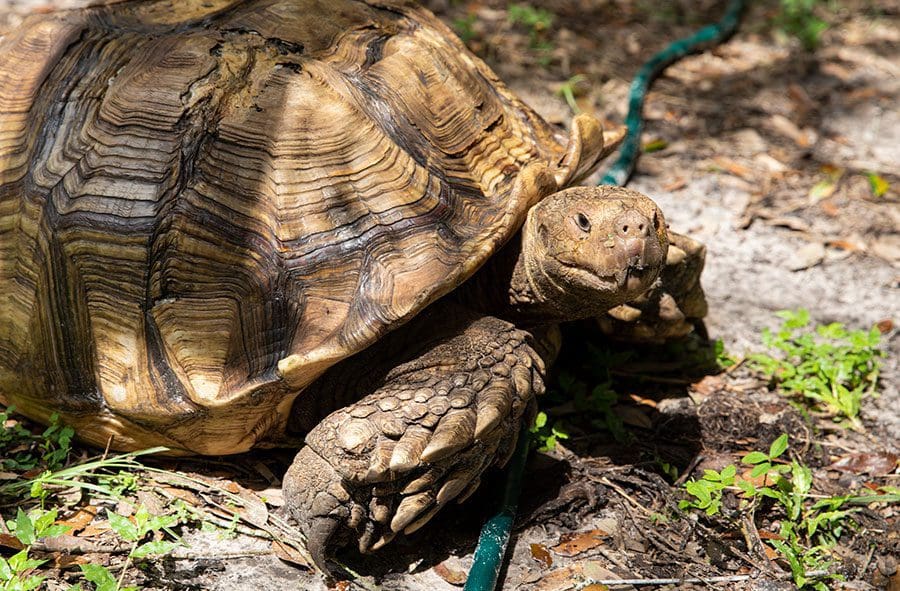 She blames the breeders as well, because of the way the animals are advertised. “They say, ‘They’re socialized, they love people, look how cute they are,’ and that combined with not doing your research is the issue. I’m buying this today, what’s this gonna look like in five years? So, they buy the adorable little thing, and then they get aggressive,” Nina says. This is why so many pets are “surrendered” to animal sanctuaries.

Chase Rescue is surrounded by the Withlacoochee State Forest. “So, the hunters that have hounds, a lot of times if they don’t hunt, they just abandon them. So, for the first probably four or five years, at the end of every hunting season, we’d get five or six hounds that we’d find around the forest, totally emaciated, skin and bones. So, we’d take them in and train them, spay and neuter them, and then we worked with Tampa Bay Beagle Rescue to go to their events and get them homes. We won’t turn our back on something that a volunteer finds or we find,” Nina says.

Chase Rescue has a volunteer staff that Nina raves about. Many are retirees and residents of The Villages, and their volunteering adds to the animals’ lives as well as their own. The rescue had a rejected baby lemur last year and some volunteers who live in The Villages helped raise her.

You can help the rescue by donating or getting the word out via social media. Something Nina also says is so important is that people need to get educated and learn that primates do not make good pets.

“So, humans are really lying to themselves or only seeing what they want to see, so obviously if you’re gonna cook a nice juicy steak you’re not really thinking about what that cow went through,” she says. “And that’s a human flaw. I think people, if you’re out to buy a baby primate you need to think about that primate being stolen and ripped away from its mother. But that kind of education that, ‘No, it’s not a good pet,’ would be really helpful.”

Group tours (ages 8+) take place Saturdays and Sundays at 11am. 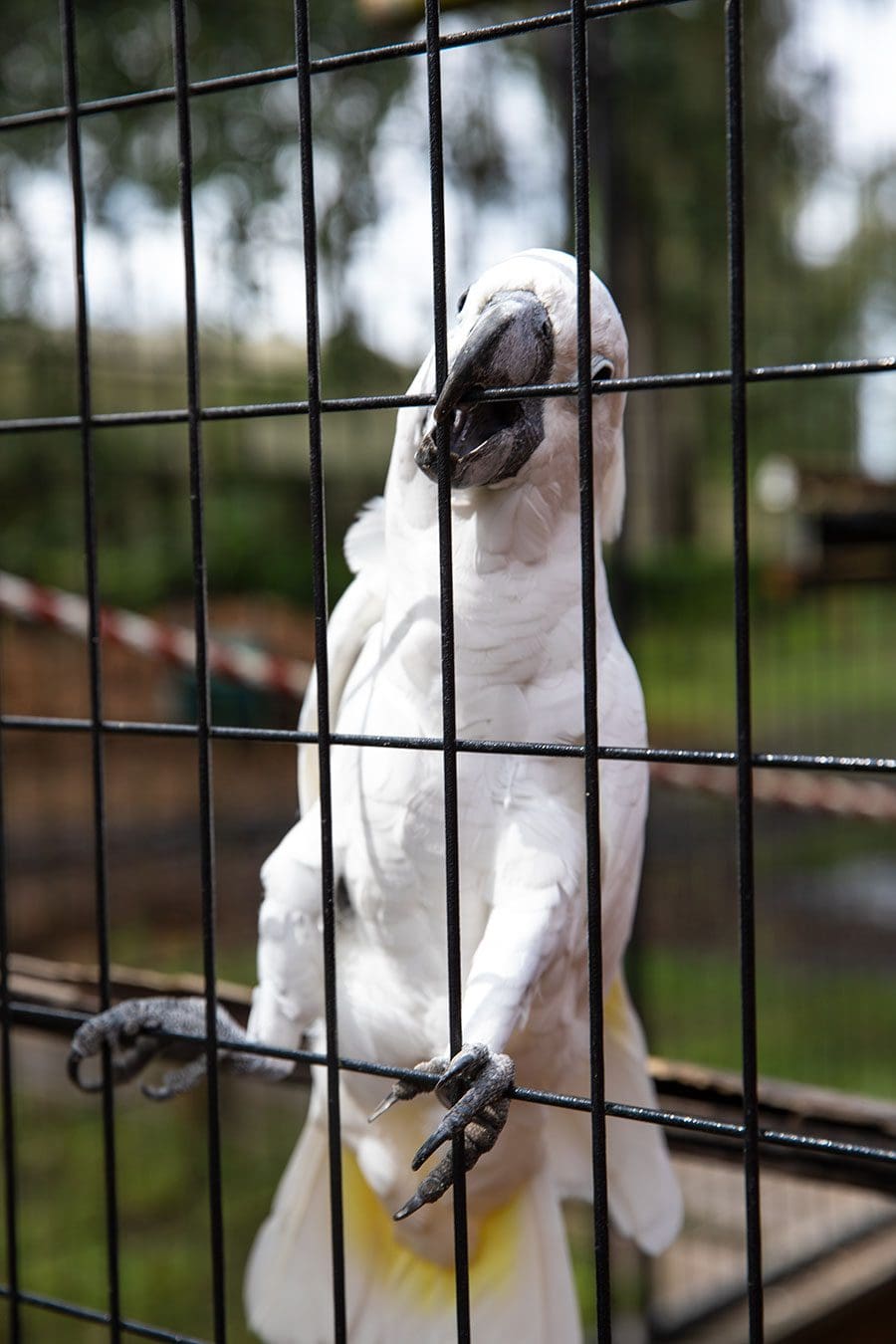