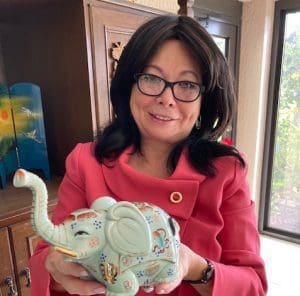 Yvonne’s recently published autobiography, “Metisse,” meaning “half-breed” in French reflects on her life as the daughter of a Vietnamese mother, a French father, and her memories growing up in war-torn Vietnam while surviving the effects of war, discrimination, abuse, rape, family chaos, fire and flood.

The former attorney is donating 300-plus copies of her book while collecting funds for the Wounded Warriors Outdoor Association. Yvonne says veterans are dear to her heart. Her late husband, Charlie, was a POW in World War II, and captured three days after the attack on Pearl Harbor.

“I love veterans,” says Yvonne. “Veterans Day is a day not only to remember those who died in service to our country but also to recognize those who continue to serve today. We are proud of our military servicemen and servicewomen and their loved ones for the contributions they have made for our country.”

She was proud to become an American citizen in 1975.

Fenney Grill says in a news release it will serve grilled hotdogs during the book signing event.