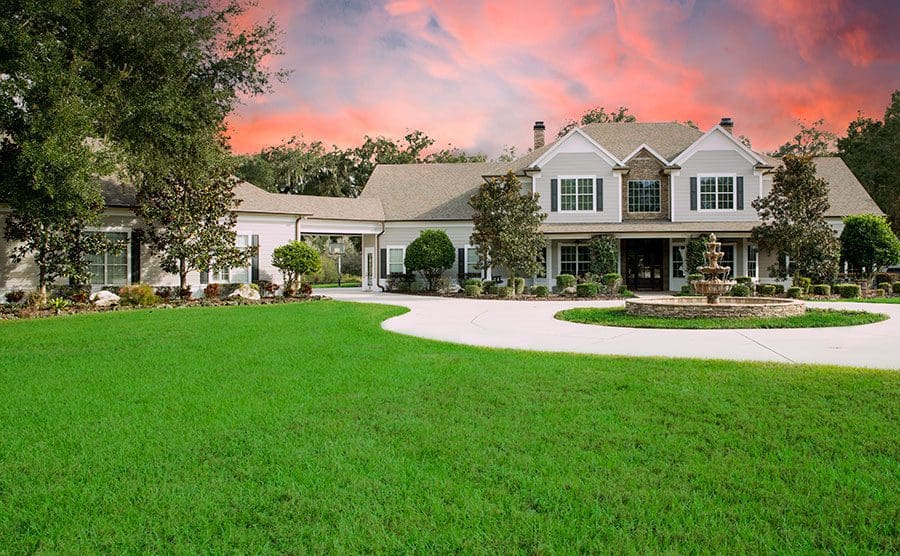 Marble, wrought iron and limestone fuse 21st and 12th century design in this Oxford home made for entertaining.

Sabrina and Joe Ciceri loved their home in Yalaha, but when they adopted more children, they realized they would need a bigger space, so they began house shopping. From the moment they stepped foot in a unique Oxford home, they saw the potential to make it exactly what they wanted.

Sabrina described the theme of the house as “country,” which isn’t really the Ciceris’ style, but they knew they could make the necessary changes to create the now castle-esque home they’ve resided in for almost four years.

“Last year we took a castle tour in Scotland. We just like castles so we wanted to try to go as much as we could that way, like black and white, but I think it has a Mediterranean feel, too,” Sabrina says.

Not only did they change most of the interior decor, they also made significant additions, such as adding a full home gym and expanding the pond on their eight-plus acres of land. 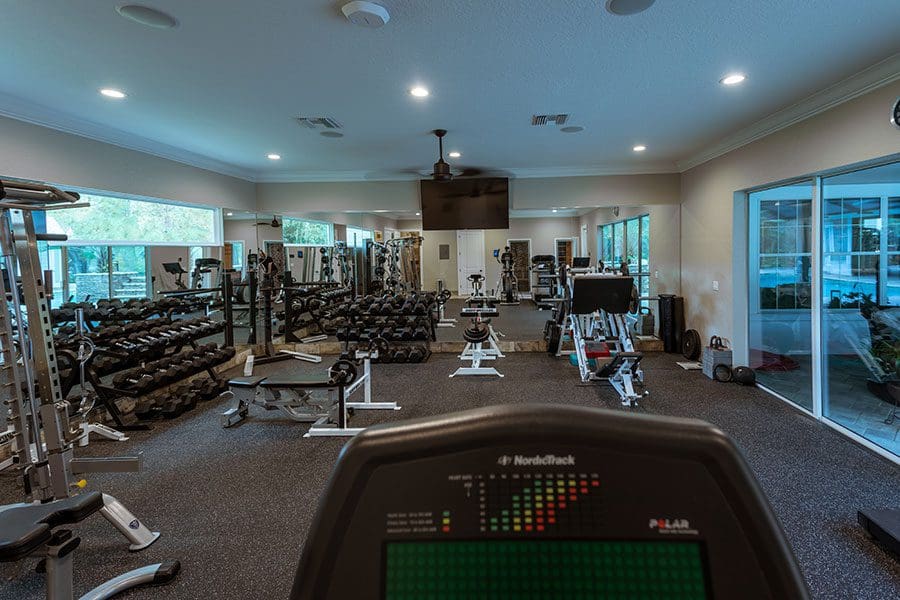 The home gym, which sits on what was originally a plot of grass behind the house, includes a sauna, steam room and massage room. This is Joe’s favorite part of the house, besides the pond and back patio of course. Sabrina appreciates not having to leave home to work out or get a massage, because it can be hard to wrangle all of the kids out of the house. 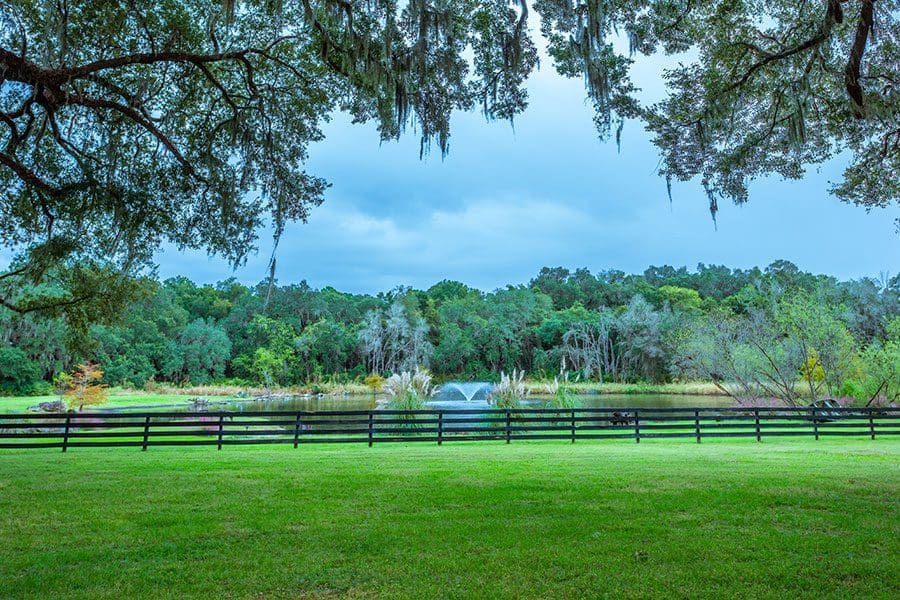 The pond was small, so they purchased an additional eight acres of land that neighbored their lot and expanded the pond, adding a fountain and plenty of bass. The pond and outdoor area is one of Joe’s favorite parts of the “house” and he spends a lot of time on the water fishing, kayaking and enjoying the Florida weather.

Sabrina enjoys having enough space to host weddings (she’s hosted three), fundraisers, and other events at her home.

“I like the events, like we’ve had a couple of fundraisers for the Boys and Girls Club, which I’m happy to have done,” she says. They also hosted a fundraiser for Anthony Sabatini of the Florida House of Representatives. “I like being able to give my home to organizations or events, to share what we’ve done with the house and plus to help out other people,” she adds.

Sabrina also loves hosting parties for their large Greek and Italian families. “We have a lot of get-togethers. Porch night, we call it, is when everybody comes over and we’re always on the porch drinking beer, hanging out,” she says. The family often grills out for these parties, but Sabrina loves to cook as well. 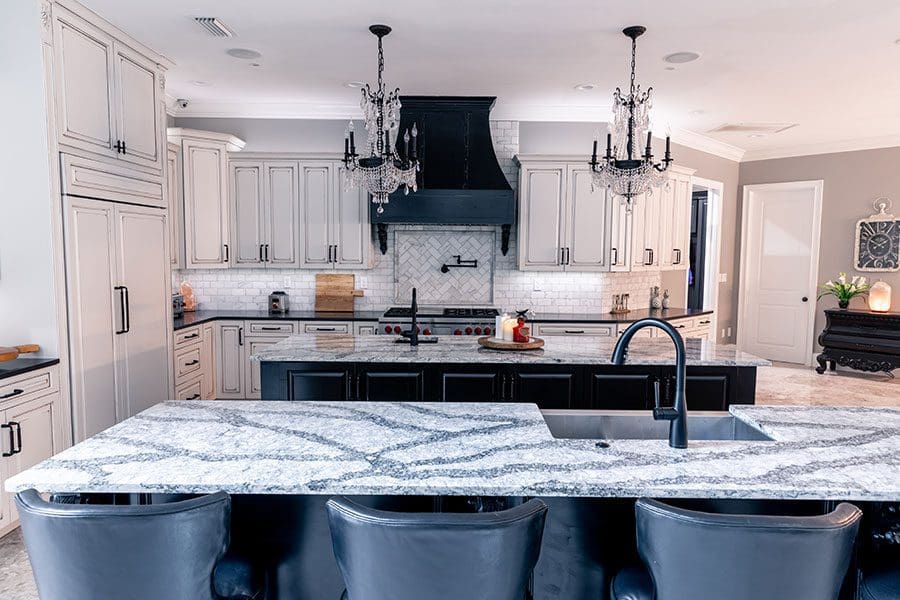 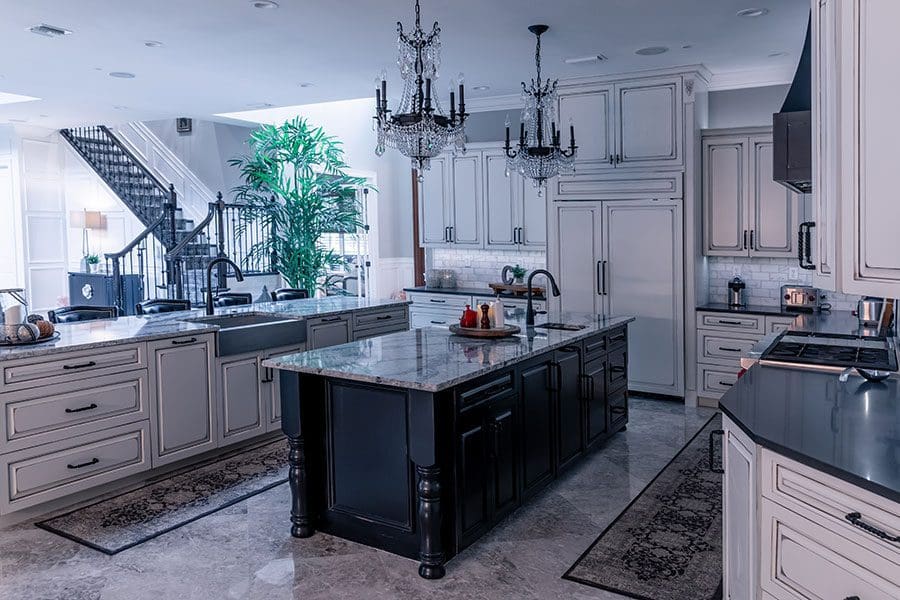 Given the number of gatherings the Ciceris host, the large kitchen is a huge plus. “I cook a lot and that’s where I stay, that’s where everybody congregates. Being with a large family, someone’s always at the bar or the table or on the back porch,” she says. The Ciceris changed the kitchen by replacing live oak cabinets and lowering counters to match their taste.

“Anybody that comes to my house knows they don’t have to bring anything; we’re fully stocked all the time. We’ll overdose you with food, alcohol, whatever,” Sabrina says. “Everybody knows if you come over here it’s for a good time, you’ll never go hungry.” She loves making charcuterie boards with meat and cheese, appetizers, lasagna and other Italian dishes, and grilling seafood. 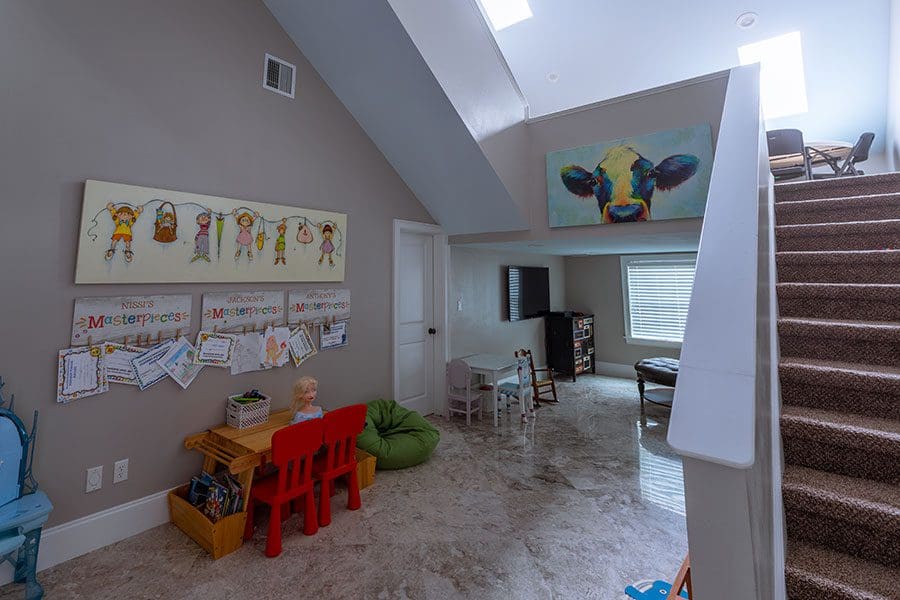 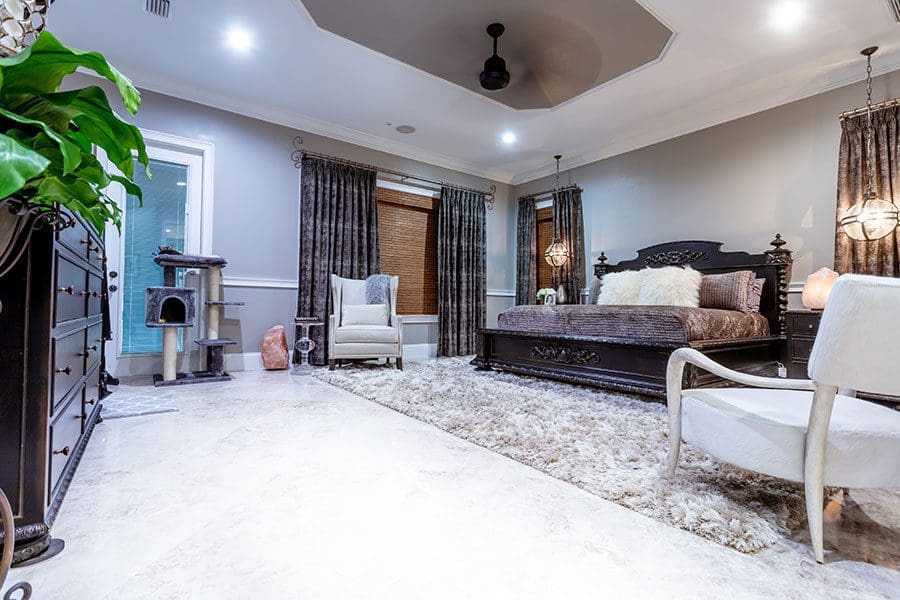 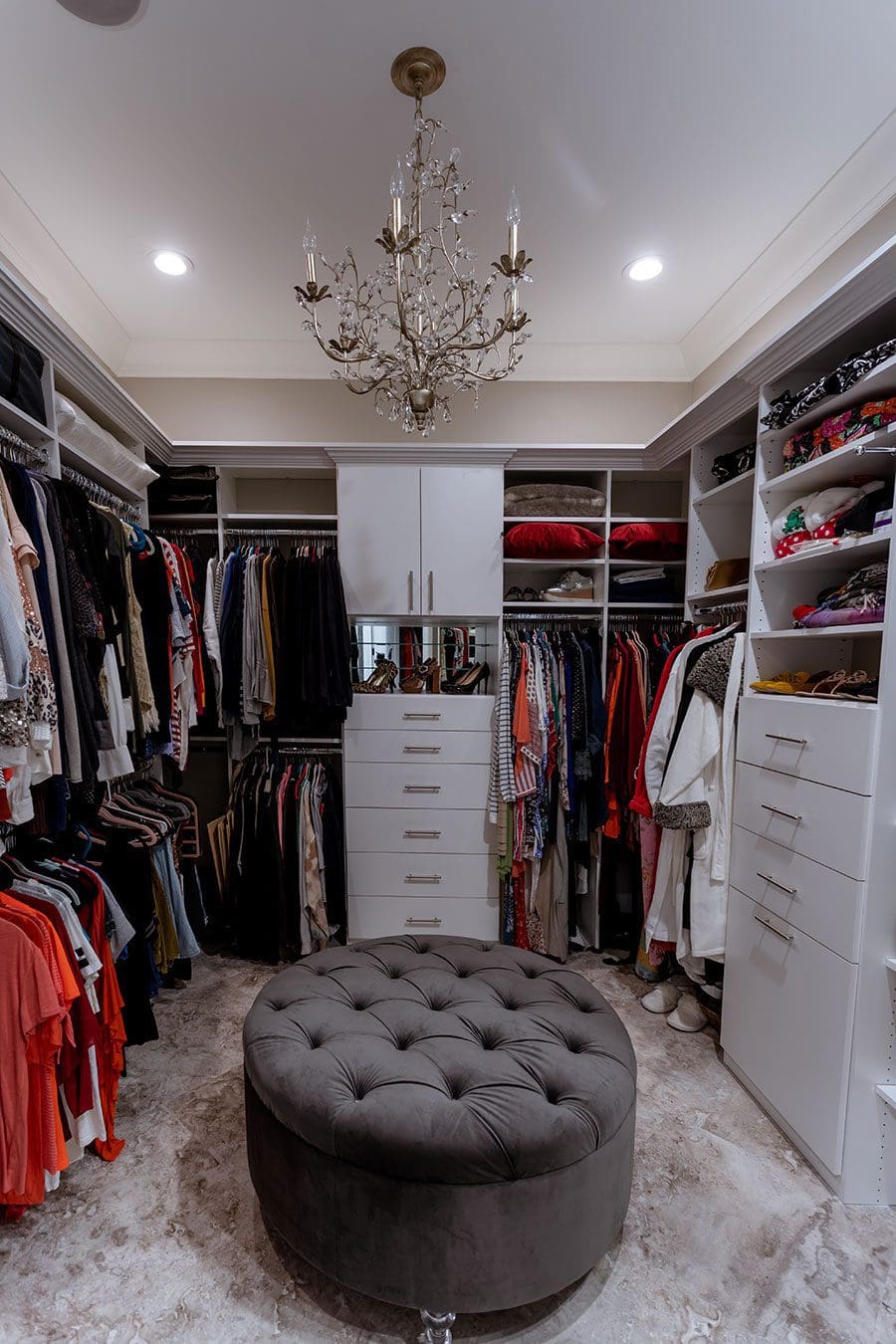 The house has plenty of room for four of six kids still living at home – five bedrooms, eight bathrooms, a theatre room, rec room, and a three-floor playroom. Every bedroom has an adjoining bathroom, and the kids’ rooms even have “secret” crawl space playrooms.

In the master suite, a noticeable detail is marble flooring, which was recently added throughout the house as well to replace medium-light hardwood that matched the original “farmhouse” look but it didn’t really “go” with the castle look Sabrina wanted. The master also has very large walk-in closets for both Joe and Sabrina. 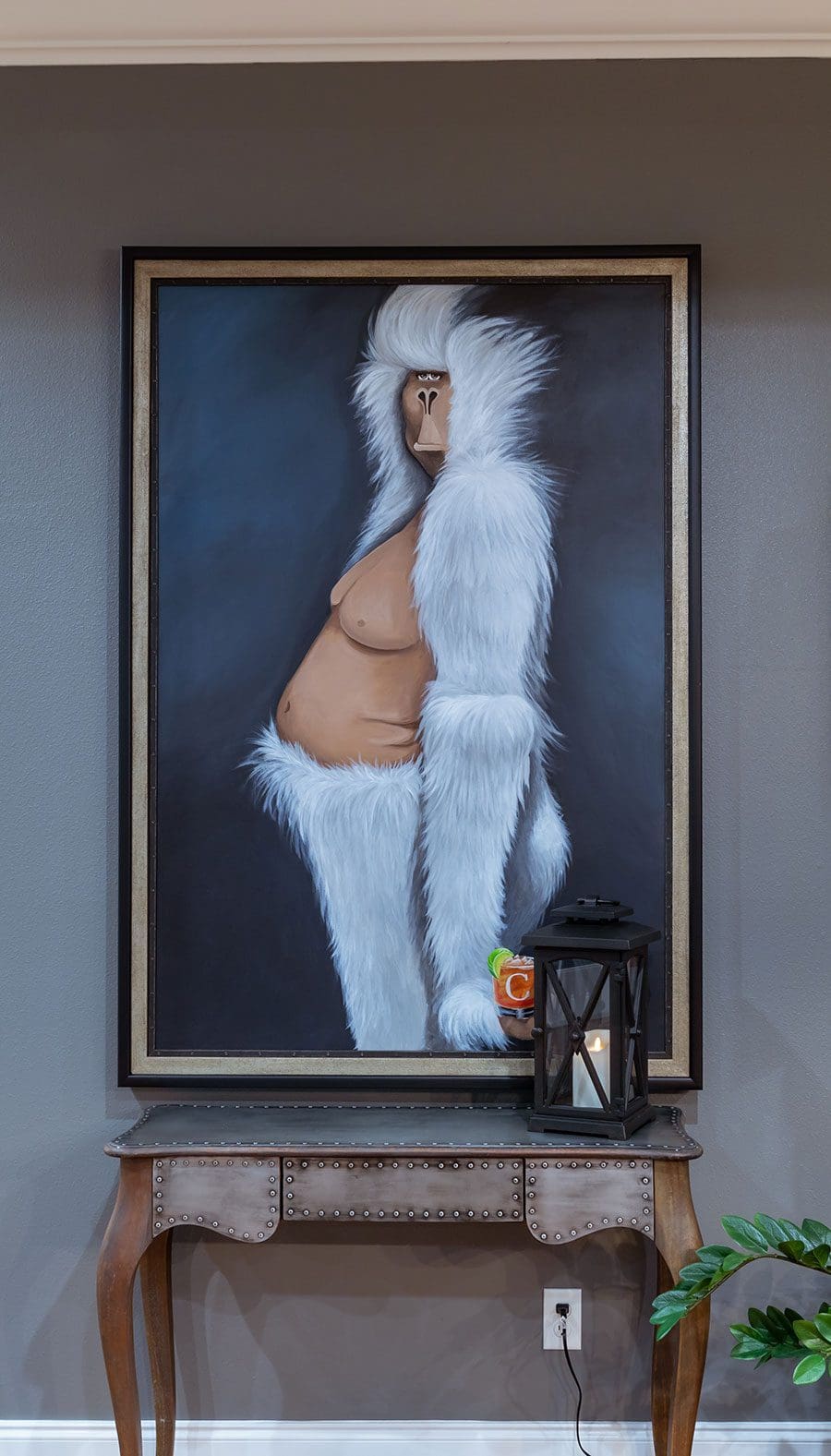 One of the most eye-catching details in the Ciceri home is a painting. After designers noticed fur decor throughout the house – blankets, details on furniture, etc., they had “Alonso” painted to satisfy her love of fur. “They had it painted kinda as a joke,” Sabrina says, but she ended up loving Alonzo. “He’s got the crown and the drink. He’s kinda grumpy but he’s cool, and that’s kinda how he is,” she says as she points to her husband. 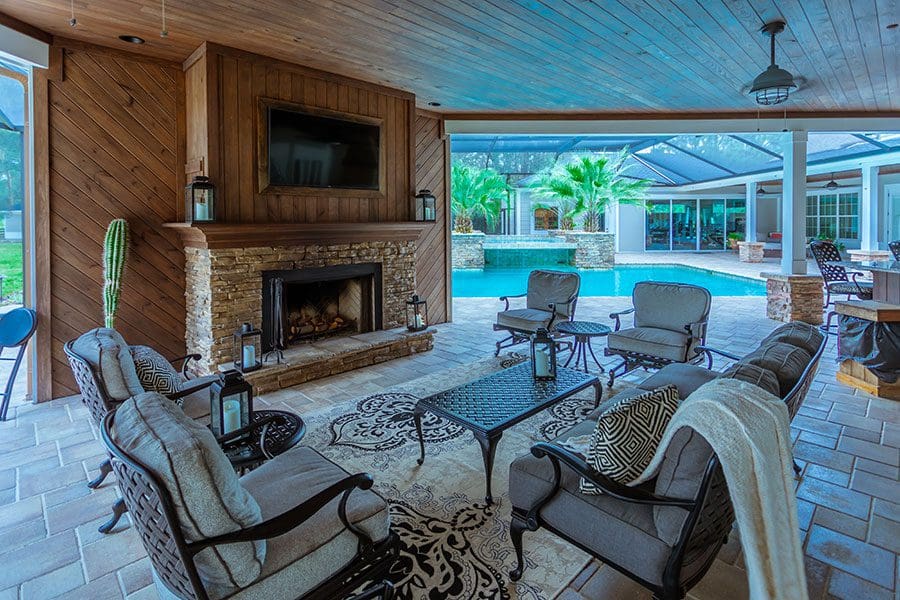 The Ciceris essentially did a whole makeover on the inside of the house.

Another big project was tearing out the wooden railing and stairs to the second floor and replacing the railings with wrought iron. Sabrina expresses her gratitude towards Denise and Suzanne of Inspired Decor, who worked with her for years and know her style well. “Whatever I was trying to find, they would find it. I wanted everything that’s dark and they helped me add color,” she says, pointing to the orange beading in the living room chandelier.

They found the chandelier at a market and had it made for the specific dimensions of the house. Sabrina adds that she loves specialized lighting and uses it to “cozy up” her home. “Under cabinet lighting, overhead lighting, dim lighting in the shelves, lighting really sets the mood,” she says. At night, the candles in the living room turn on automatically and “give the room a cozy feel.” Her favorite lighting feature is the chandelier in the foyer.

With the price of the house and the changes made, Sabrina says the house is now worth roughly $2 million.

And they’re not done yet, Sabrina still has changes she’d like to get done to make the house perfect. The theatre room has yet to be touched, and she wants to use limestone to replace the shelving surrounding the fireplace (all the way up), with two statement chairs on each side.

“It’s a pain ‘cause every time we finally do something and say, ‘That’s it for a while,’ then we get caught up in doing something else.”