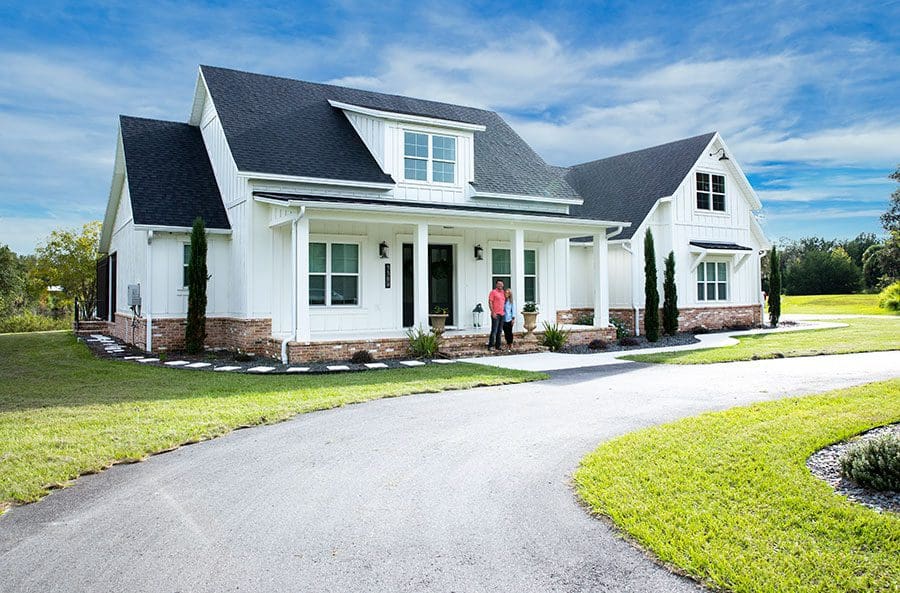 Doug Childers credits his wife Heather’s creative eye for the many projects and unique details within their “forever home.”

The couple knew they wanted a farmhouse-style home, and Heather made great use of Pinterest for inspiration. Creating her home also helped Heather realize her passion for design.

“I spent hours on Pinterest, so I found a house that I liked. Then on the inside I just kept pinning things that I liked, like my fireplace, and the tile in the half baths, so I would say I made all of those decisions for the inside,” Heather says. She also followed some home designers who have a similar style as herself and used ideas from Pottery Barn and Ballard Designs. She describes the house as “Joanna Gaines-inspired modern farmhouse.”

The family shares 60 acres of land with Doug’s brother and parents. Their home on 10 of those acres has three bedrooms, two full baths, one outdoor half bath and one indoor half bath. They officially moved in in May of 2019. 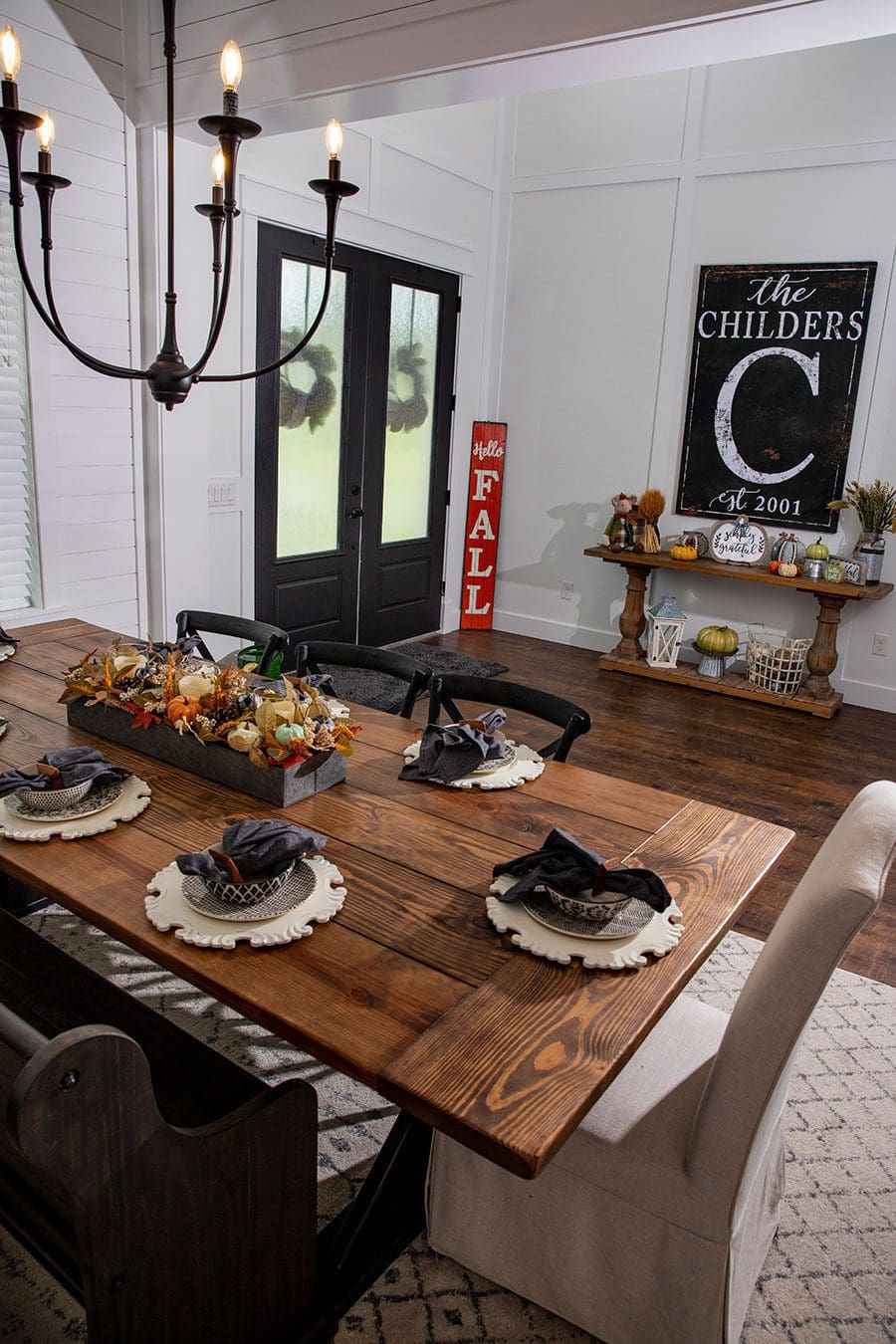 As much as she was inspired by Pinterest, it took Heather forever to find a piece she liked for the entry to the house. That’s because it is 22 feet high, so she needed to find something big enough. “It’s a Childers sign. We recently just got that in July, so it was over a year, it took a while to find the right piece.” Heather got the sign from ToeFishArt, an Etsy shop.

As seen in the half-bath, Heather wanted a lot of wood features in her home. “I feel like wood makes it warm, ‘cause I knew I’d have a lot of white,” she says. She gives her brother “props” for building the barn door, dining room table and breakfast nook table from scratch, and for doing all of the shiplap, including a “really cool wall” in the master bedroom. 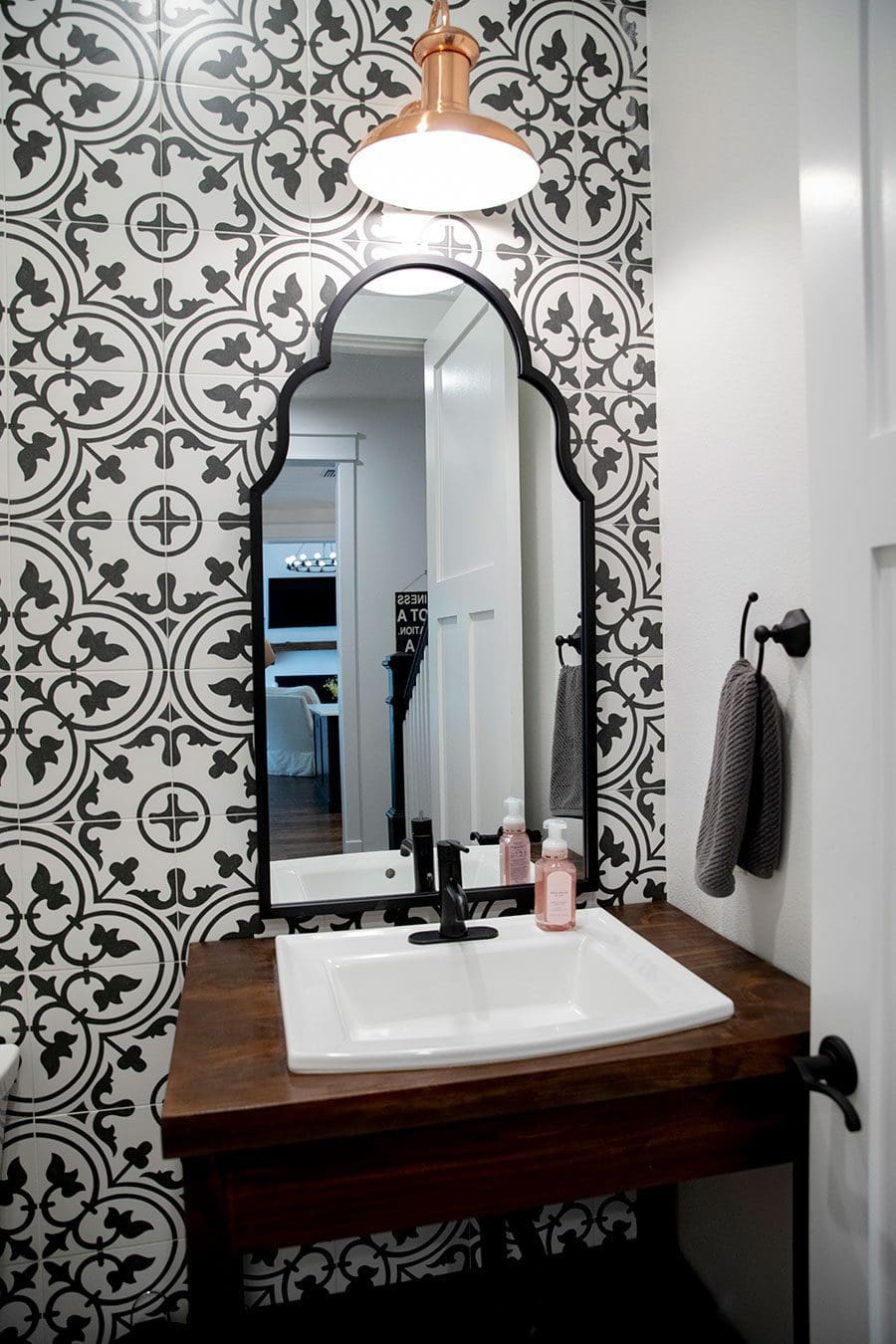 The indoor half-bath is just one of the many detailed features. “I love the half-bath with the black and white tile. I love that look with the wood countertop,” Heather says. Doug wanted to include a special feature in every room, “Like a wow moment. So that’s what we made sure, even in the half-baths, that they had those,” Heather adds. 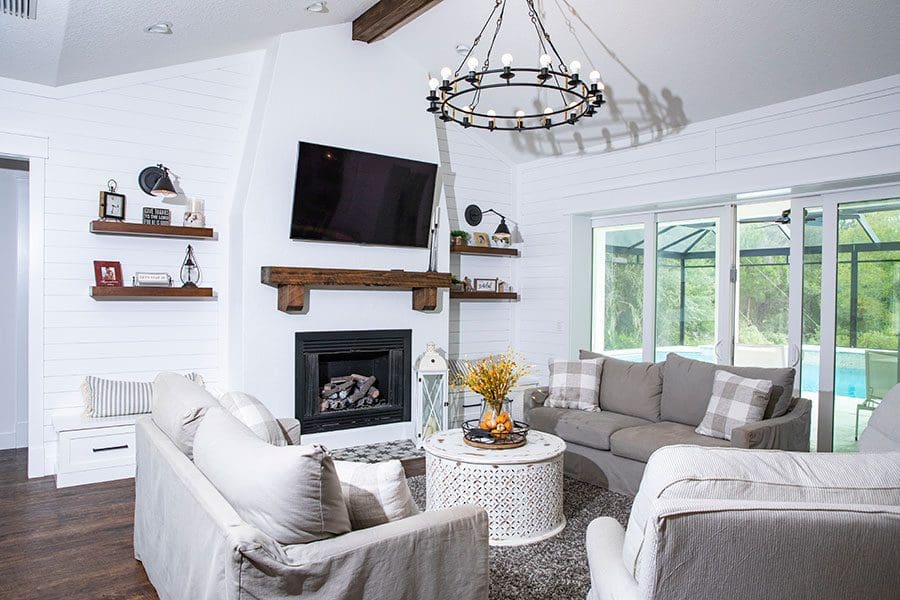 The indoor fireplace is one of Heather’s favorite elements. That was one of the few design disagreements Heather and Doug had. “He wanted it to be brick and I wanted it to be what it was so I said ‘Just let me get it’ and he didn’t see my vision until everything else got in there.” 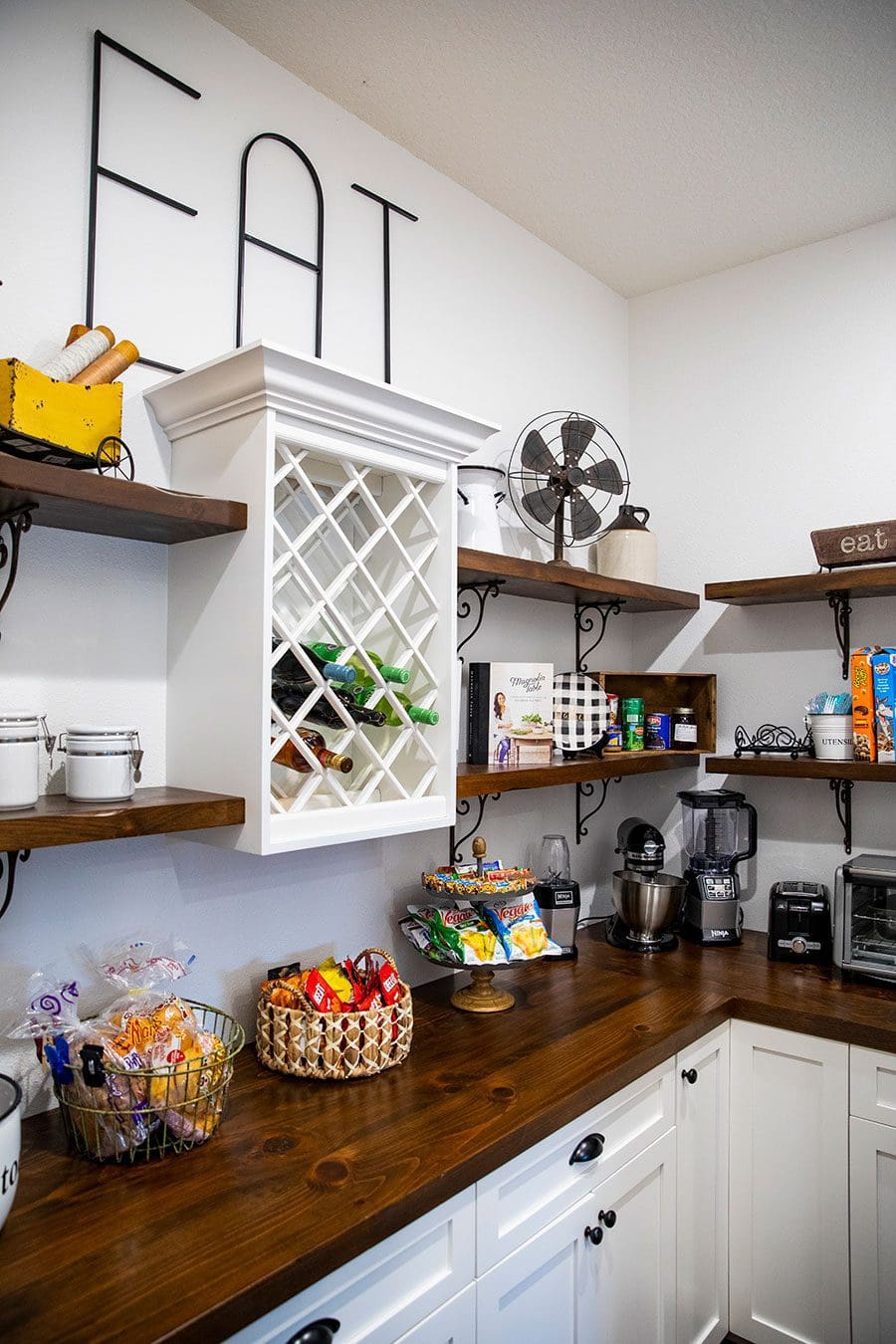 Another wood feature serves as entry to the large pantry off the kitchen. “I love the swinging doors that go in and out like a saloon, and then I just love having all my blenders and all of that in there so it’s not taking up space on my kitchen countertops,” Heather says. The Childers’ pantry is always stocked with lots of snacks, as they are always hosting their daughters’ friends or cousins. Cheez-Its are a staple. The ever-present snack inspired the nickname “Cheez it Char” for one daughter. “She can’t live without them,” Heather says. 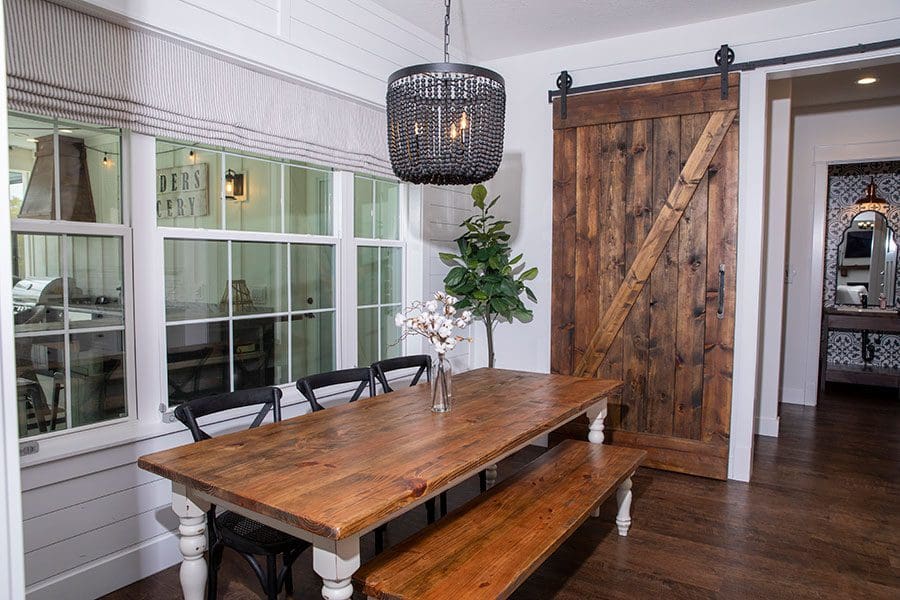 The breakfast nook features a beaded light fixture and one of the tables built by Heather’s brother, Josh Miller, who runs Jomish Design. There, he specializes in handcrafted and custom home decor, with a “farmhouse flare” to them, including tables, entertainment centers, wall hangings and more. Josh and Matt Yoder of T&D Builders also helped bring Heather’s Pinterest boards to life.

“The little beaded lights were kind of a fun story. We were on vacation and I was in the dressing room and asked if that light fixture was for sale, and they said no but they would sell it to me,” Heather says. “So, it all just kinda came together, I would see something I liked and put it all together.”

Breakfast is Heather’s favorite meal to cook, so Saturdays often include bacon, eggs and “Mama’s Favorite Pancakes,” lovingly named by the Childers’ youngest daughter after Heather started making the recipe during quarantine. 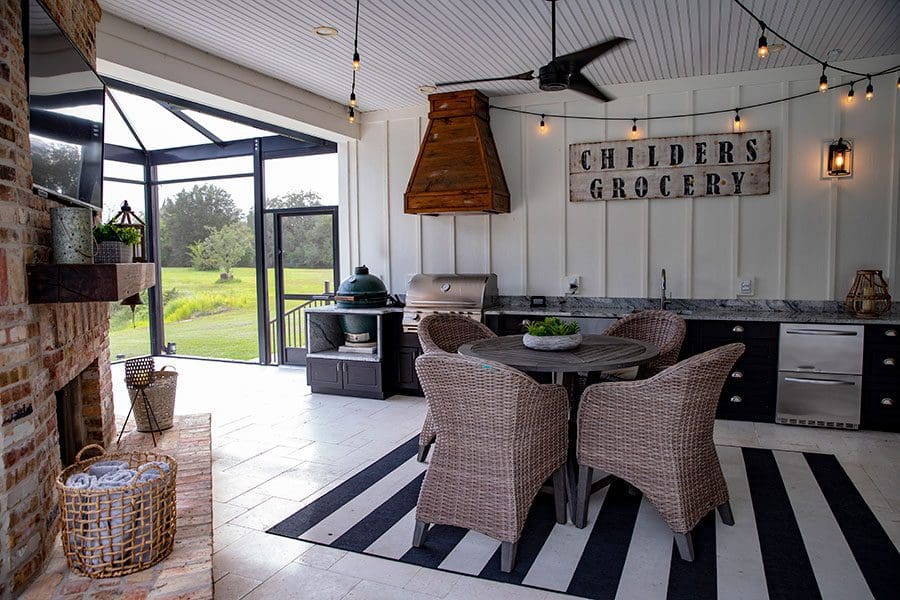 One of the family’s favorite features is the outdoor area, including a pool, fireplace, outdoor kitchen and firepit, all on the edge of a pond, where they love to fish, paddleboard, kayak and swim. “Doug spends every single moment when he’s home out there,” Heather says. Many weekends are spent “grilling and chilling,” wings being one of Doug’s favorite things to make while the kids are swimming in the pool or playing in the rock pit, the area by the pond where they jump into the almost 80-foot deep water. 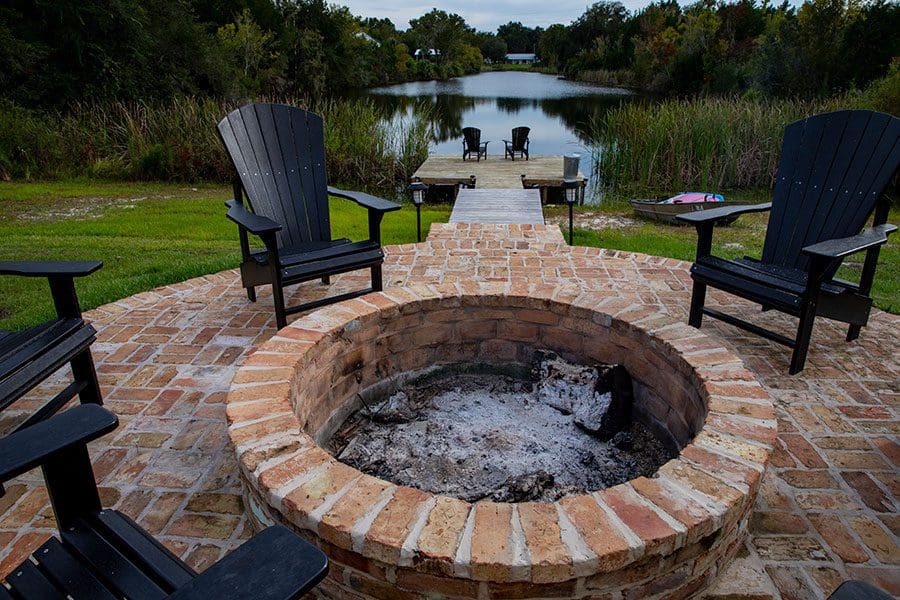 “It’s a neat little compound. His (Doug’s) brother lives out there, his parents live out there, so the kids have all this area to just romp around.” The family also keeps its pet bunny’s cage outside, but let him wander into the house and around the patio as much as he wants.

“It’s just a forever home.” It’s not huge, Heather says, but she and Doug knew they wanted to live there as they got older, so she wanted to make sure she could still clean it. “We took a while until we decided we were ready to build a house, but we wanted to build it exactly like we wanted, and just have a place that the kids would love to have their friends over. We wanted the home that all the kids wanted to come to,” she says.

When it’s cold outside the kids love to go out and do s’mores, and just hang out. Every year Heather and Doug always host either Thanksgiving or Christmas parties and have about 50 of Heather’s family members with their kids over. “We need to have a lot more parties, but when we do have a big get together it’s a lot of people.” 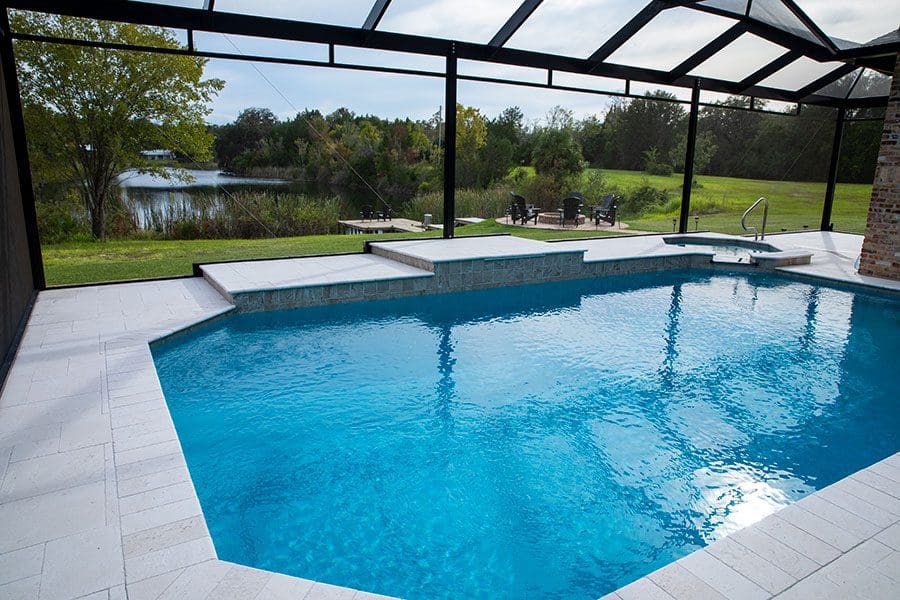