The South Lake Chamber of Commerce Board of Directors voted unanimously to name the Outstanding Student Leader Award in honor of the late Ray Goodgame, a former Clermont City Council member. 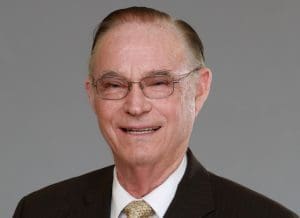 The Ray Goodgame Outstanding Student Leader Award was developed to honor students in the South Lake area that not only excel in academics, but additionally in service and leadership within their school and community. The award honors Goodgame’s memory and constant commitment to the South Lake community through education and volunteerism.

“The Chamber is proud to remember Ray’s legacy as a champion for our community by naming this prestigious academic award after him,” David Colby, president and CEO of South Lake Chamber of Commerce said in a press release.

The first scholarship will be awarded to a student from Montverde Academy at the Sept. 20 Chamber Breakfast. The award will also be given to deserving students from East Ridge High School, Lake Minneola High School, Real Life Christian Academy and South Lake High School throughout the school year.

“Ray was a great supporter of the City of Clermont,” Clermont City Manager Darren Gray said in a press release.

Ray passionately served the citizens of the City of Clermont for 15 years. He had recently been nominated for the Florida League of Cities’ “E. Harris Drew” Municipal Official Lifetime Achievement Award.

“If you have recently moved to Clermont, know that you are living in the best-managed city any place,” Goodgame wrote in a column published in the “South Lake Tablet” in July 2018. “We have one of the highest ranked fire departments around. Our police department is outstanding as well. Take a look around and study any other city and I believe you will find out you are living in the greatest city in the USA. Thank you for the privilege of serving as your representative.”

He served the city for 17 years. He was a big proponent of affordable housing for seniors and has worked closely with New Beginnings. He has attended neighborhood watch meetings, praising the Clermont Police Department for its community efforts. He advocated for the city become involved in a Feed Clermont program to donate food to hungry citizens by providing collection boxes and collaborating with local businesses and food banks.

Ray also suggested a veterans monument for Clermont; implementing an incentive for local contractors when bidding on projects; and having the county provide more funding to existing parks and to purchase additional land for parks. He was honored by the Boy Scouts.

The councilman helped lead Lake County’s largest city through an exciting time of unprecedented business and population growth, as well as the adoption of Clermont’s award-winning $30 million Downtown-Waterfront Master Plan in 2015 and the city’s rebranding to “Choice of Champions” in 2014. He helped approve the recent annexation of the 250-acre Olympus Project into the city, which is estimated to create over 4,000 jobs and over $1.4 billion in economic impact.