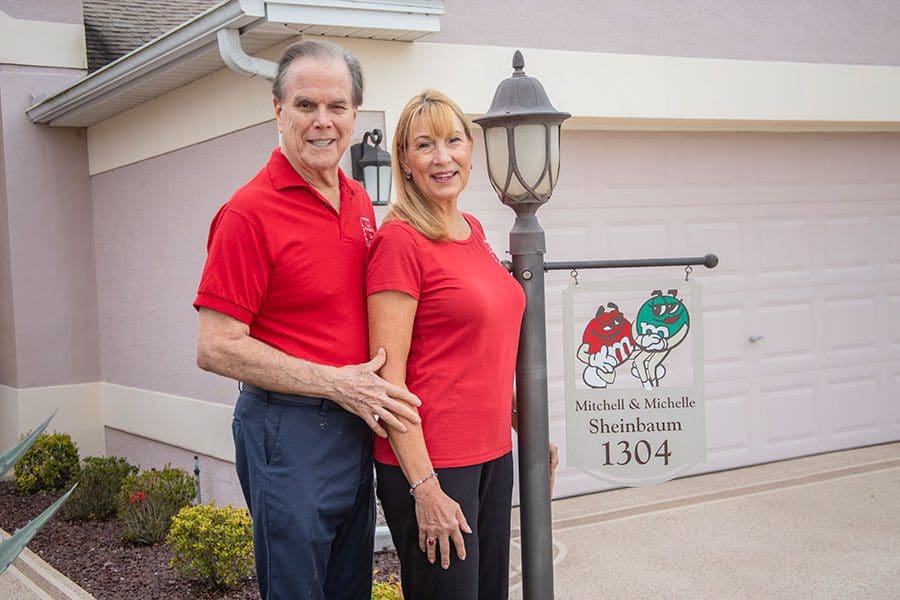 Couple strives to make every day a second honeymoon for themselves and others.

After five years of riding the shock of his wife leaving him, Mitchell Sheinbaum forced himself to attend a friend’s party, only to walk into a five-star hotel in Short Hills, New Jersey, and witness a young couple’s engagement in the middle of a ballroom filled with about 700 people he didn’t know.

On his way past the scene, he saw three women examining the ring and heard one jokingly ask the couple if they’d just met that night.

Intrigued by her playfulness, Mitchell, a successful businessman, told the woman he’d ask her to marry him if only he had a ring on him. To his surprise, she obliged.

“She turns around, takes a ring off her finger and hands it to me, and I said, ‘Ok, now that I have the equipment, will you marry me?’ and she said, ‘Of course I will.’ We pick a day to get married and a place to go on our honeymoon and I said, “Oh, by the way, what’s your name?” Mitchell tells. “Now that was 25 years ago, and I have never from that moment, been so happy.”

Mitchell and Michelle, married over 24 years and now living in The Villages, are still going strong.

They have made it their mission to keep the romance alive in their marriage, but also to bring romance to other married couples by way of the 2nd Honeymoon Club – a group they started after their first Valentine’s Day following their official retirement to Florida.

“Places advertised Valentine’s Day meals, but there was nothing special, so I decided to create something special,” says Mitchell, explaining that he invited six other couples to join him and Michelle (14 people total in honor of Valentine’s Day) for a night of fun and romance.

Mitchell rented a room at the Nancy Lopez Country Club, and though each couple purchased their own dinner, he supplied all the romantic fixings, including fresh roses, heart-shaped balloons and picture frames, boxes of chocolates, and plush animals for each lady.

He said a comment by one of the men that night became the genesis behind the club.

Mitchell continues, “Everyone loved the idea, so the club basically started with a concept that doesn’t relate to golf, politics, or work; just romance.”

Fast forward 12 years and the 2nd Honeymoon Club is at capacity with about 1,100 members and 400 people on a wait list.

Pre-COVID-19, members gathered at the Savannah Center for monthly meetings, complete with entertainment, and again during the month for an outing, whether it be a show, concert, cruise, or other special event.

Michelle says, for her, the club is primarily Mitchell doing his thing.

“After the initial honeymoon period in the marriage, a lot of men and women take each other for granted, especially when they get overwhelmed with household or work stuff,” Michelle says. “But Mitchell does romantic things all the time. Typically, he comes home with flowers, he’s always cooking me special meals, he makes me coffee in the morning and brings it to me in the bedroom when I’m waking up. He’s always thinking of what he can do for me and it makes me feel very much appreciated.”

“The only reason to join the club is to be with other couples who love each other and want to do romantic things. There is no hidden agenda; it’s really simple,” Mitchell says.

As nice as it may sound, all club activities have been postponed due to the coronavirus pandemic. Their last meeting was in February 2020.

“Everything’s been put on hold until COVID becomes a non-issue,” says Mitchell.

Ray Struski, an original member and organizer – and the one who said he’d enjoyed that first Valentine’s Day gathering – says he and his wife Rosemary enjoy the camaraderie and new friendships the 2nd Honeymoon Club brings and cannot wait to return.

Mitchell says he hopes members are embracing the club’s concept at home by doing romantic things like watching movies together, snuggling, playing cards and planning future vacations and activities like he and Michelle do each day.

“If you’re with someone you love, every day has the potential of being like a second honeymoon,” Mitchell says.

Want to see your club in Social Club Spotlight? →  Send your suggestions to roxanne@akersmediagroup.com.