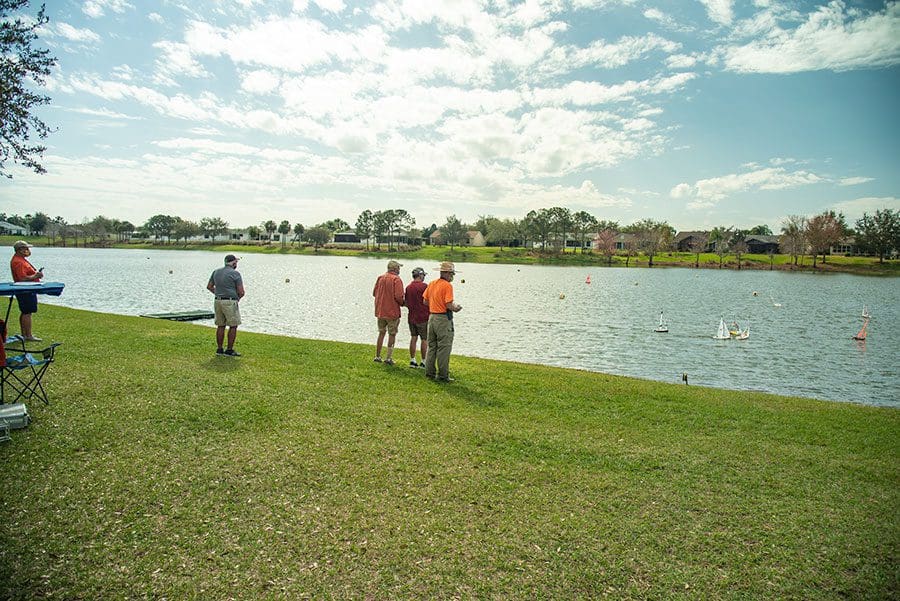 John Rowley started sailing decades ago after he and wife Sue stepped onto a friend’s boat and fell in love.

The duo bought their own boat, and together with their children, raced and sailed happily through many a sunset in places like New Orleans, San Francisco, and Hawaii, where they lived. John even went on to earn a captain’s license in ocean sailing.

Instead of the 27-foot and 33-foot boats he owned, John’s current boat of choice is Squirt, an orange, 21-inch-long Micro Magic radio-controlled model boat adorned with orange splashes on the sail.

“Their size makes them extremely easy to transport. But they are not toys, they are high-tech yachts,” John says of Micro Magic sailboats, most which weigh about 2 pounds. 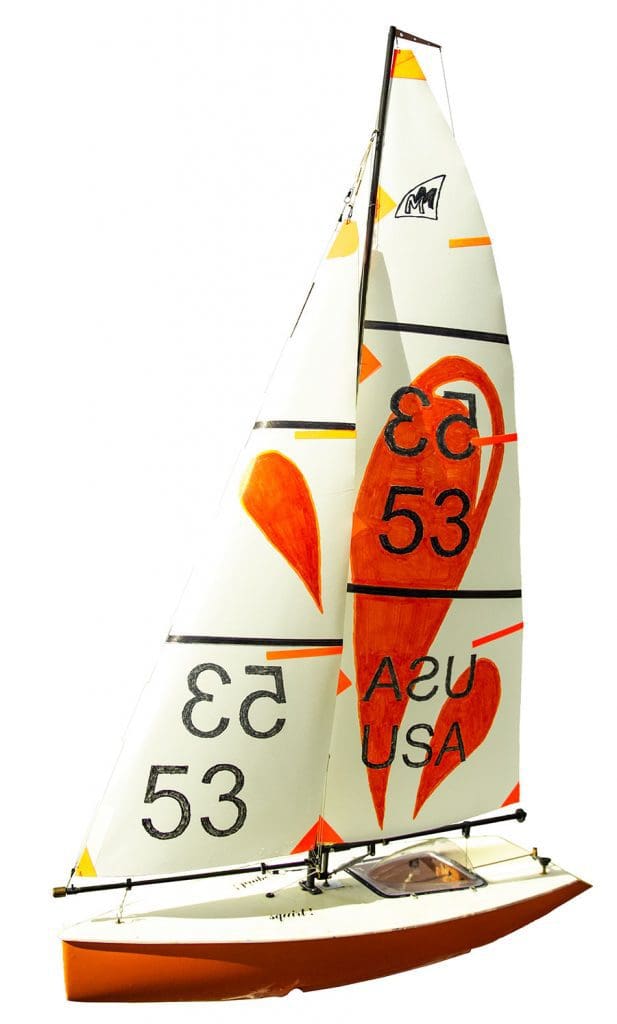 When John arrived in The Villages, he came across the Model Yacht Club Squadron and got into racing EC-12s, 5-foot-long boats with 6-foot masts.

In late 2008, when John caught wind of Micro Magics, his interest shifted. He visited a nearby hobby shop, and after finding out that the fleets were only sold in groups of six, John gathered five of his friends and together and they purchased the kits.

Today, with John at the helm as fleet commander and Tony Lawrence as his second, the Micro Magic Racing Fleet is part of the squadron.

Each Monday and Friday from 10 a.m. to noon, squad members get together for timed Micro Magic races on a buoy course around Ashland Pond on Lynnhaven Lane in the Village of Ashland. 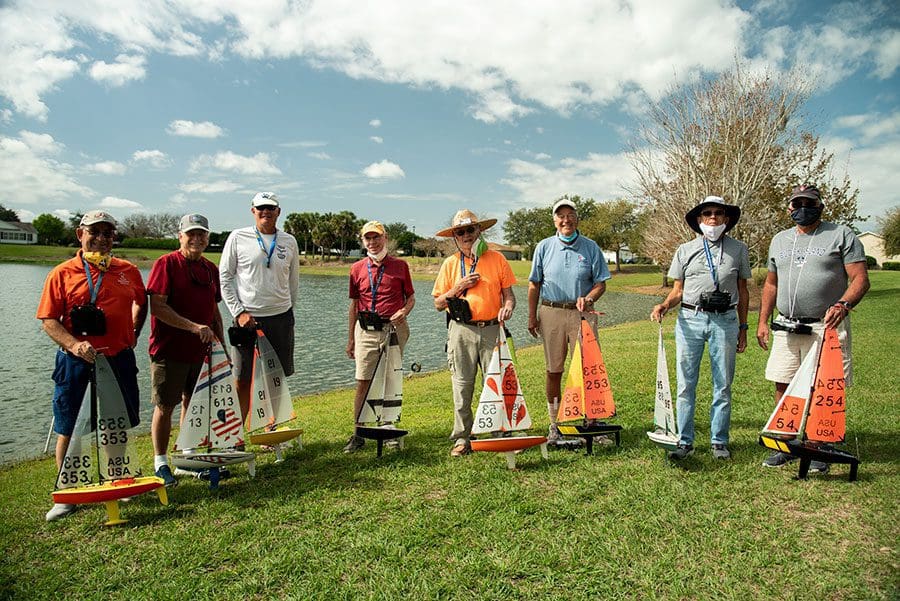 John says newbies should keep an open mind about the size of the small boats. He says technique, mindset, and the thrill of navigating Micro Magics is no different than what he experienced with a big boat.

In fact, the same racing rules apply to small boats, with a few modifications, like not having to wear a life jacket.

“It’s a matter of seeing what the wind is doing to the boat and knowing what the boat needs, in terms of wind direction, to get to the marks, just like a big boat,” John says. “It’s all about planning and thinking ahead, about controlling the rudders, but the difference is that you are not standing on the deck, obviously, you’re standing on the shore, so you’re having to learn what’s going on out there on the water too.” 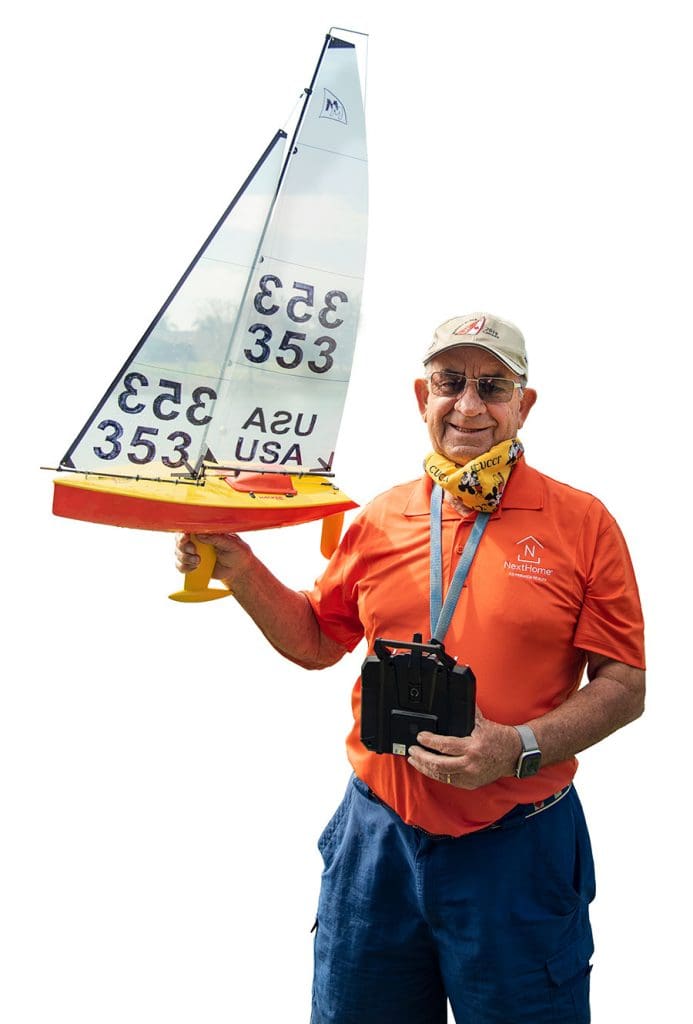 Jim Kelly, who lives nearby, joined the club and began racing after coming by just to watch one morning about four years ago. Jim says a member offered to let him try his hand at the controls and that’s all it took even though he’d never sailed.

He was enthralled with the science involved in adjusting the sails in relation to the wind and steering by controlling the rudders using a double-sided joystick.

But it’s the fun and camaraderie that keep Jim coming back each week.

“We come out here and race, but we just have a good time,” Jim says. 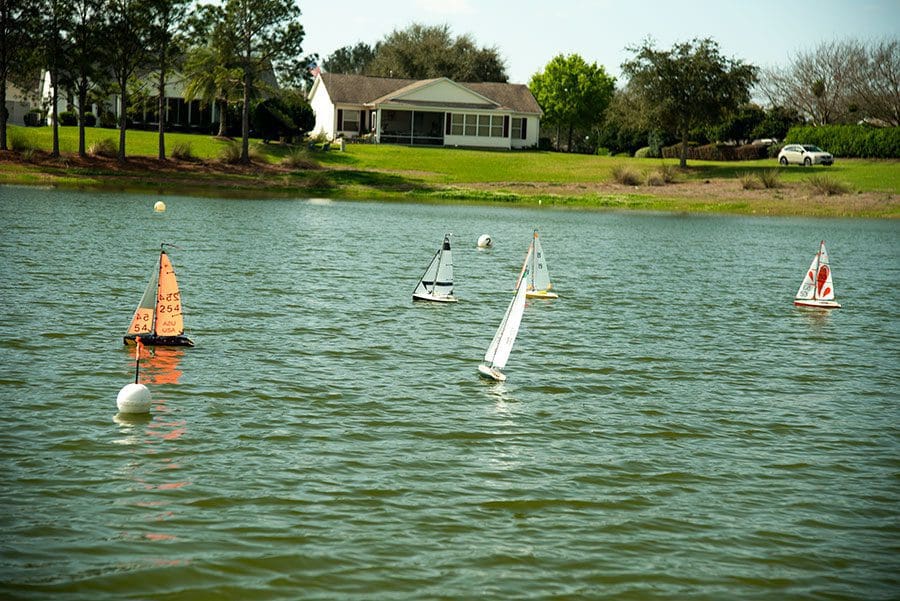 That may be because Alan has been sailing boats since 1958, starting with dinghies as a boy of about 7-years-old growing up in England, and working his way up to big yachts.

Alan began racing competitively, and even came close to representing the United Kingdom in the Olympics.

Alan no longer sails big boats because he lives so far from the ocean and the considerable expense involved. He is happy sticking to the second-best thing–sailing little boats, a hobby he shares with Liz, his wife of 50 years.

Today, at age 75, he competes in radio-controlled boat regattas all over the country (pre-COVID), and for the past five or six years has been named the Florida champion. In 2016, Alan sailed his way into the 2nd place spot nationally. 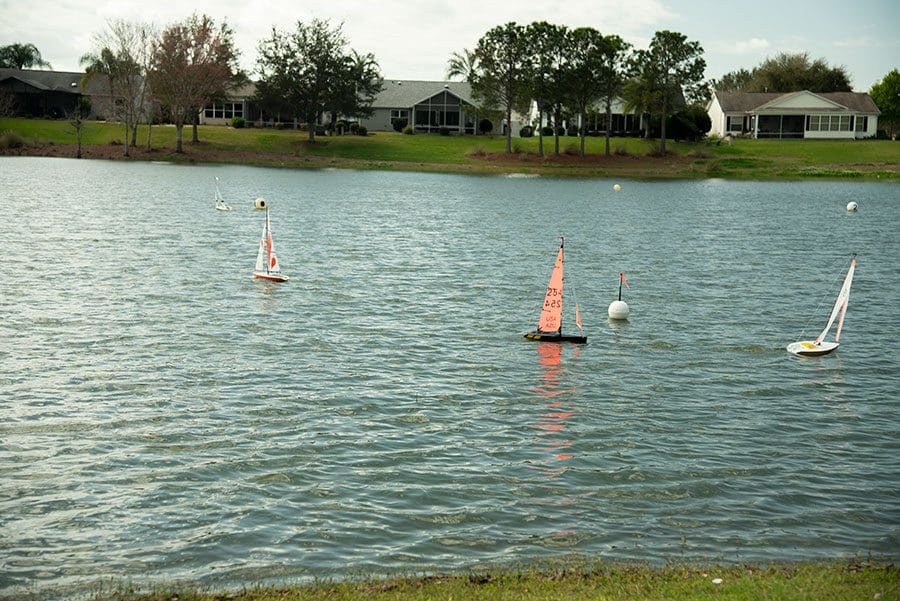 Alan’s knowledge extends beyond racing. He’s known for making boats and as the local “doctor” for models in need of repair.

“I got hooked on these little boats and most of them will come as kits, so it enables you to build the boat, actually put something of yourself into the boat and get the satisfaction of when you sail it, you’re sailing something that you’ve made,” Alan says.

The Villages Model Yacht Club members race most days, depending on boat sizes, from 10 a.m. to noon at Ashland Pond. The next American Model Yachting Association Micro Magic regatta is planned for late October in Punta Gorda. For more information, visit TVMYS.org.