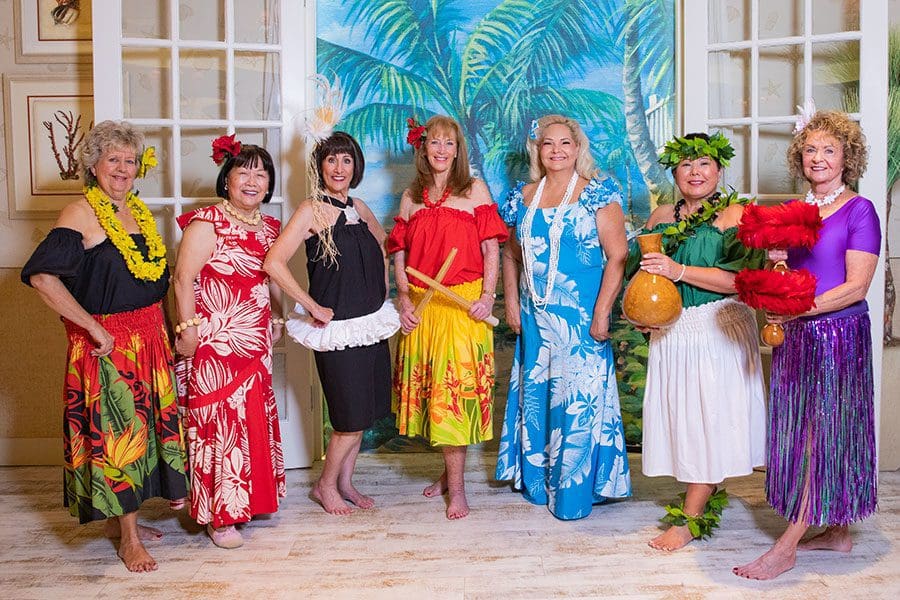 Villagers, the sisterhood, and fun of hula.

The ladies in the Aloha ‘O Ka Hula Dance Group have brought the spirit of Hawaii to Florida. Violet Ray, who started the group shortly after moving to The Villages with her husband in 2008, has a long history with dance and the practice of hula.

Violet has been hooked on hula ever since she was a line dance teacher in Las Vegas in the 1990s and some of her students from Hawaii invited her to join their hula group. She danced with the group for several years, and after a trip to Hawaii with her husband, the couple decided to move there in 2002. “It’s just like going back 50 years in time, the Big Island. It was just so relaxing. We decided we wanted to move there to just slow down our pace of living, and of course I could take hula there. It was interesting and I’m still connected to a lot of people there,” Violet says. 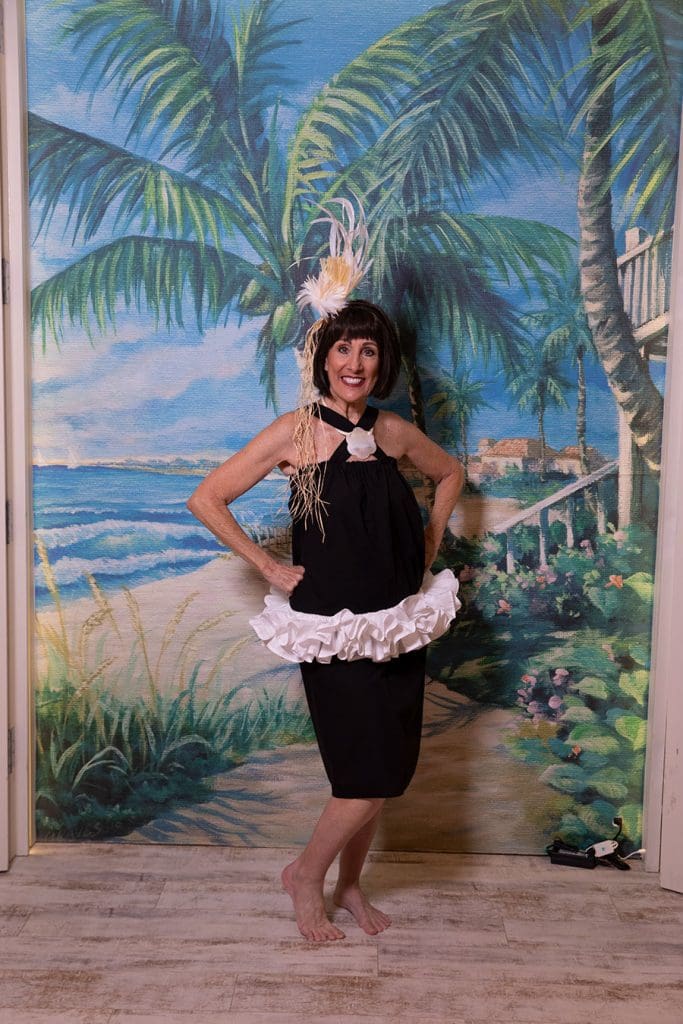 She continued her study of hula in Hawaii, and when she got to The Villages, she didn’t want to give it up. She found there was no hula group close by, so she started her own. The group that grew to 26 women has been together for over 12 years.

During COVID quarantine, Violet hosted hula classes via Zoom on Tuesdays and Thursdays. Later, the group met every two weeks at outdoor pavilions, before recreation centers finally opened back up. 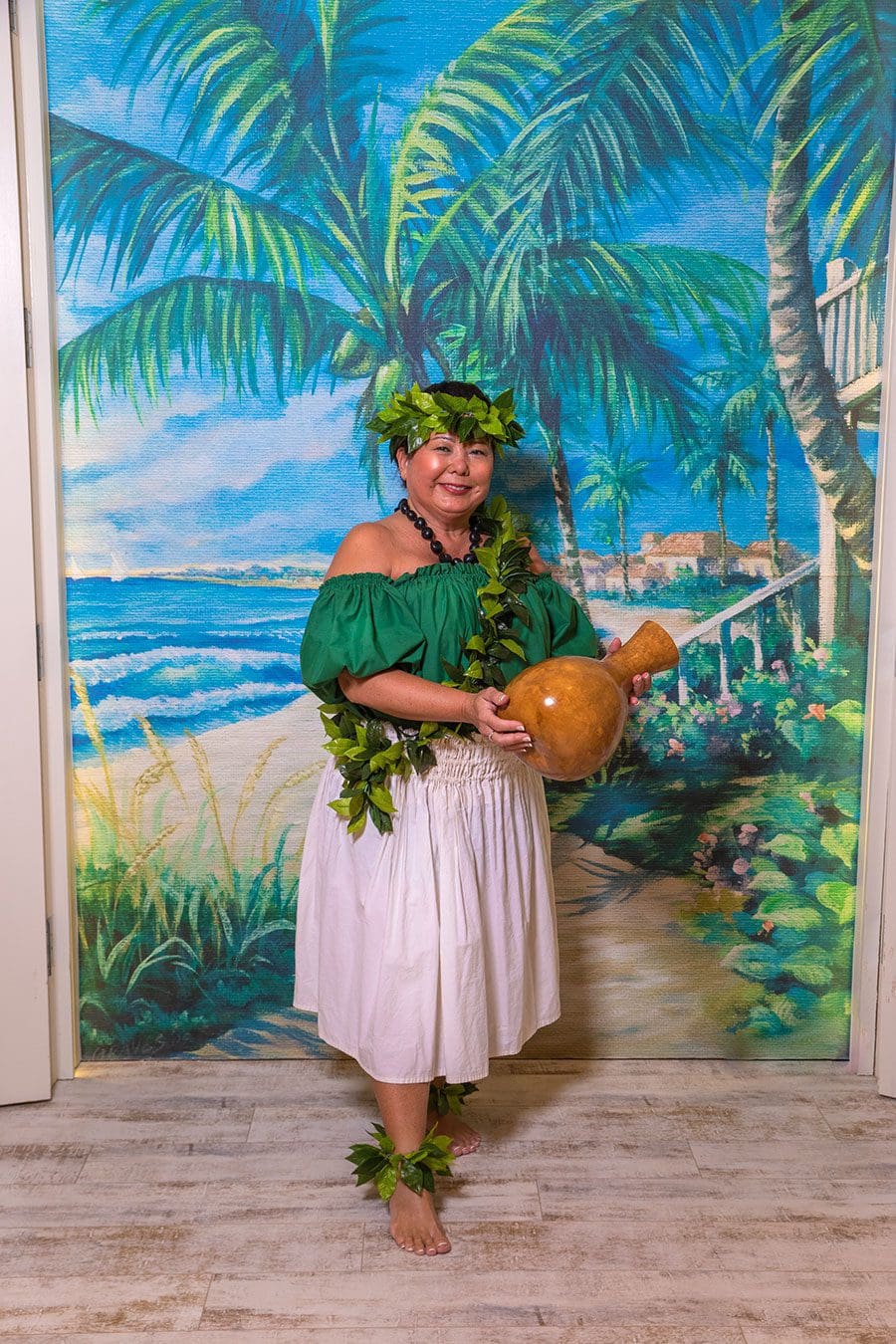 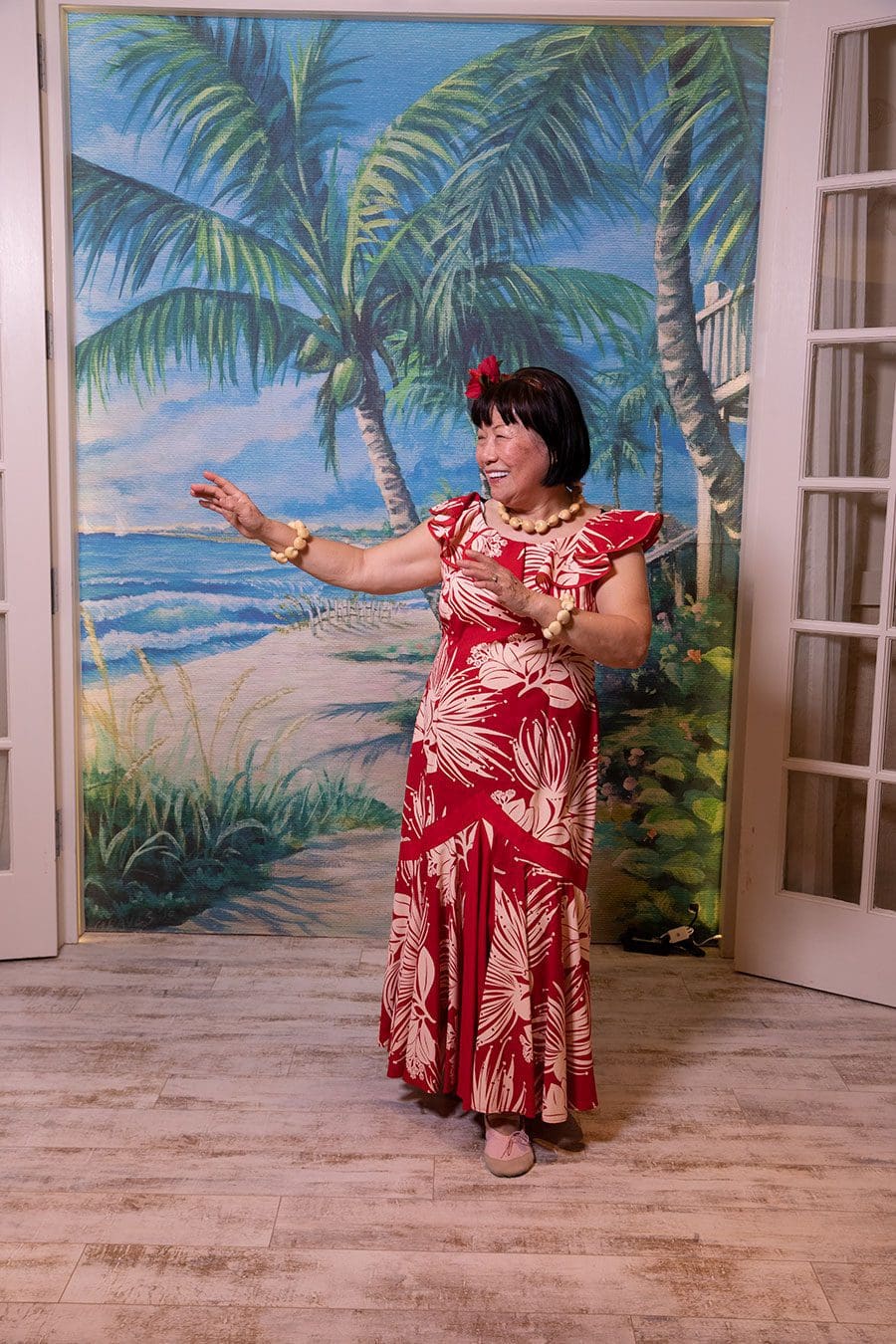 Dawna Thomas of Fernandina, who did hula and Tahitian dance when she was younger, has been a part of the troupe for four years. “But to come to The Villages and to start when you’re an elderly person it’s so different, so we have a lot of fun,” she says.

Dawna likes that hula is great exercise and loves the comradery and hula spirit of the group. “Violet makes it so interesting, she’s a wonderful teacher. She’s so talented in other genres besides hula, but with hula it’s very graceful and slow and relaxing,” Dawna says. Violet even choreographs most of the dances.

“She tries to introduce about three new dances a year, so we have well over 40 dances that we do. It’s so exciting to see our new hula sisters enjoy what we’ve done and to share our techniques with each other,” Dawna adds.

Violet also loves that everybody is so willing to help each other. “When you become a group, they call it halau, you feel like family; that feeling of ohana. Everybody’s close to each other, everybody’s nice. We got a nice group of ladies,” she says. 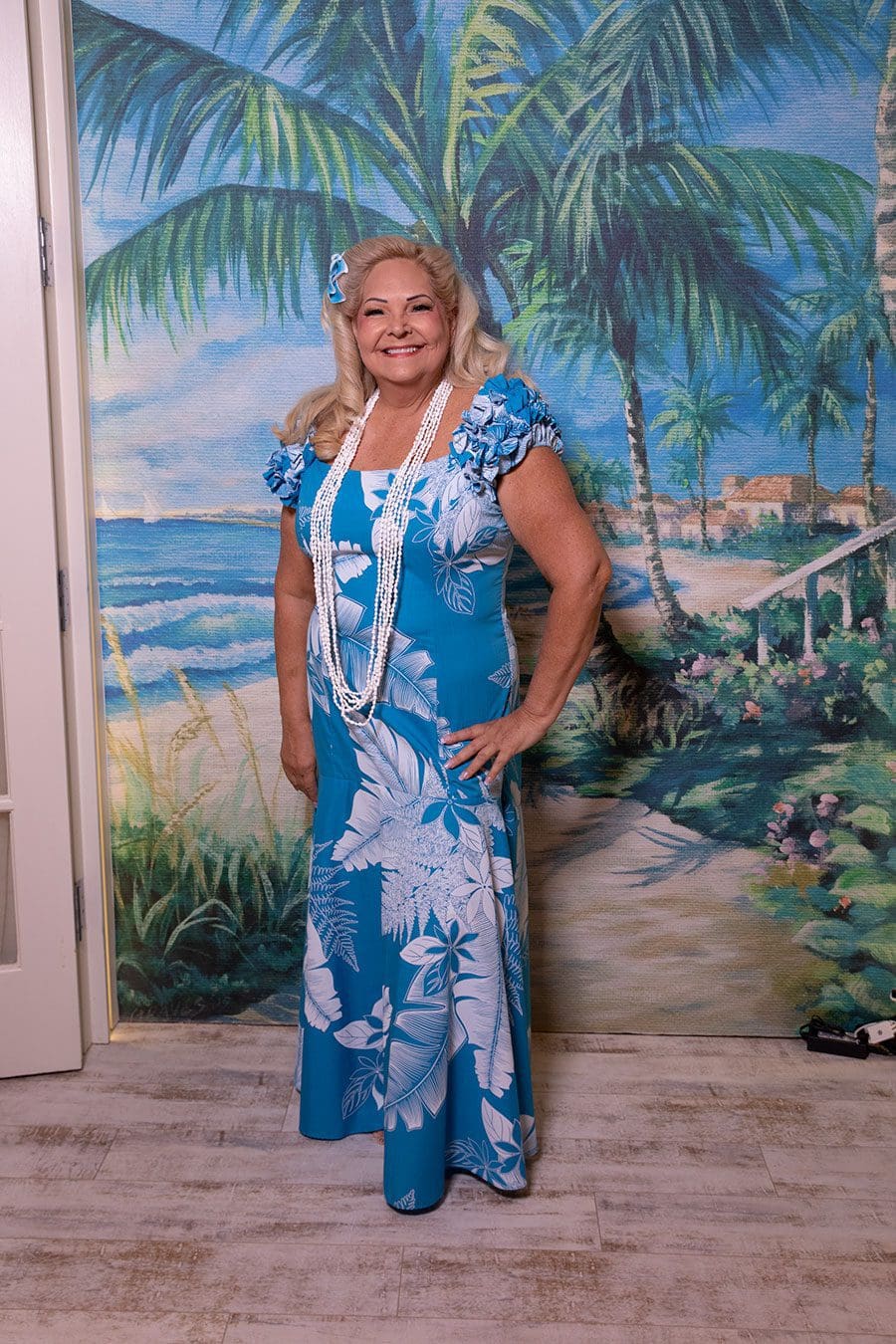 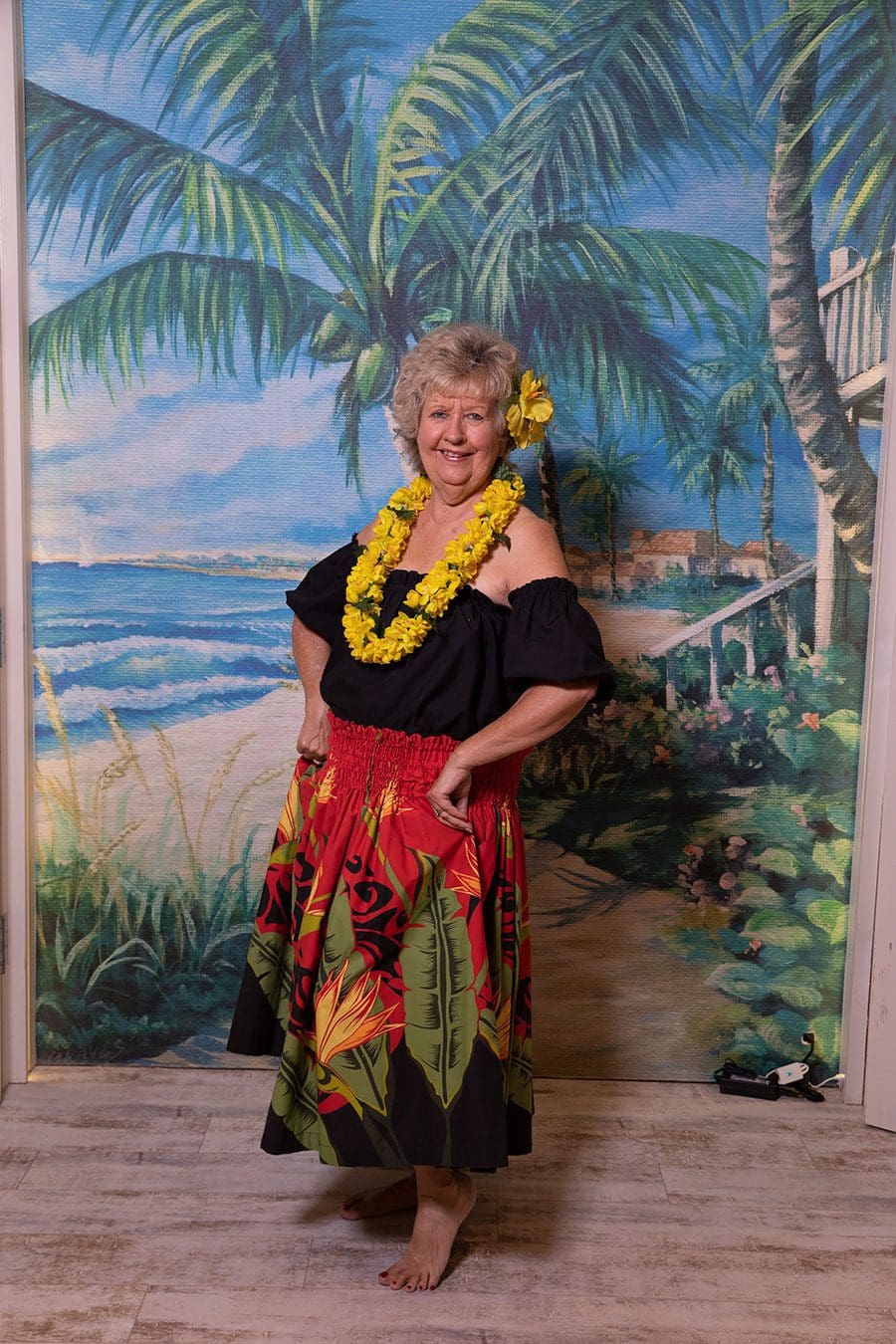 Halua literally means “a branch from which many leaves grow.” Ohana is the Hawaiian word for “family.”

Janice Brennan of Tamarind Grove says hula is good for your health, stating that she’s gained a lot of muscle since joining the group. Janice is a Hawaii native who relocated to The Villages in 2011 and joined the group late that year.

“When I first saw the recreation news announcement, I saw the group listed and I called Violet, and when she told me it was a performing troupe I said ‘thank you’ and hung up, because I’m not a performer,” Janice says.

Growing up in Kona, Hawaii, Janice’s mother, who loved everything about hula, was heartbroken that her daughter didn’t share her appreciation for the practice. “Hula is very athletic, especially learning it as a child in Hawaii,” Janice says. “It uses a lot of muscle and the teachers quite often are very military-like. And I was shy, so I didn’t even like being in the class with other people watching me.”

It wasn’t until she got to The Villages, where she says the dancing is a lot gentler, that she decided to give hula a second chance. “When you get older you start thinking about your childhood and your history, so I decided to give it another try,” she says.

After talking with Violet, she kept thinking about the group, and decided to go watch a class. She was drawn in by the loving way that Violet taught the troupe, and the interaction that all of the girls had with each other and with Violet. 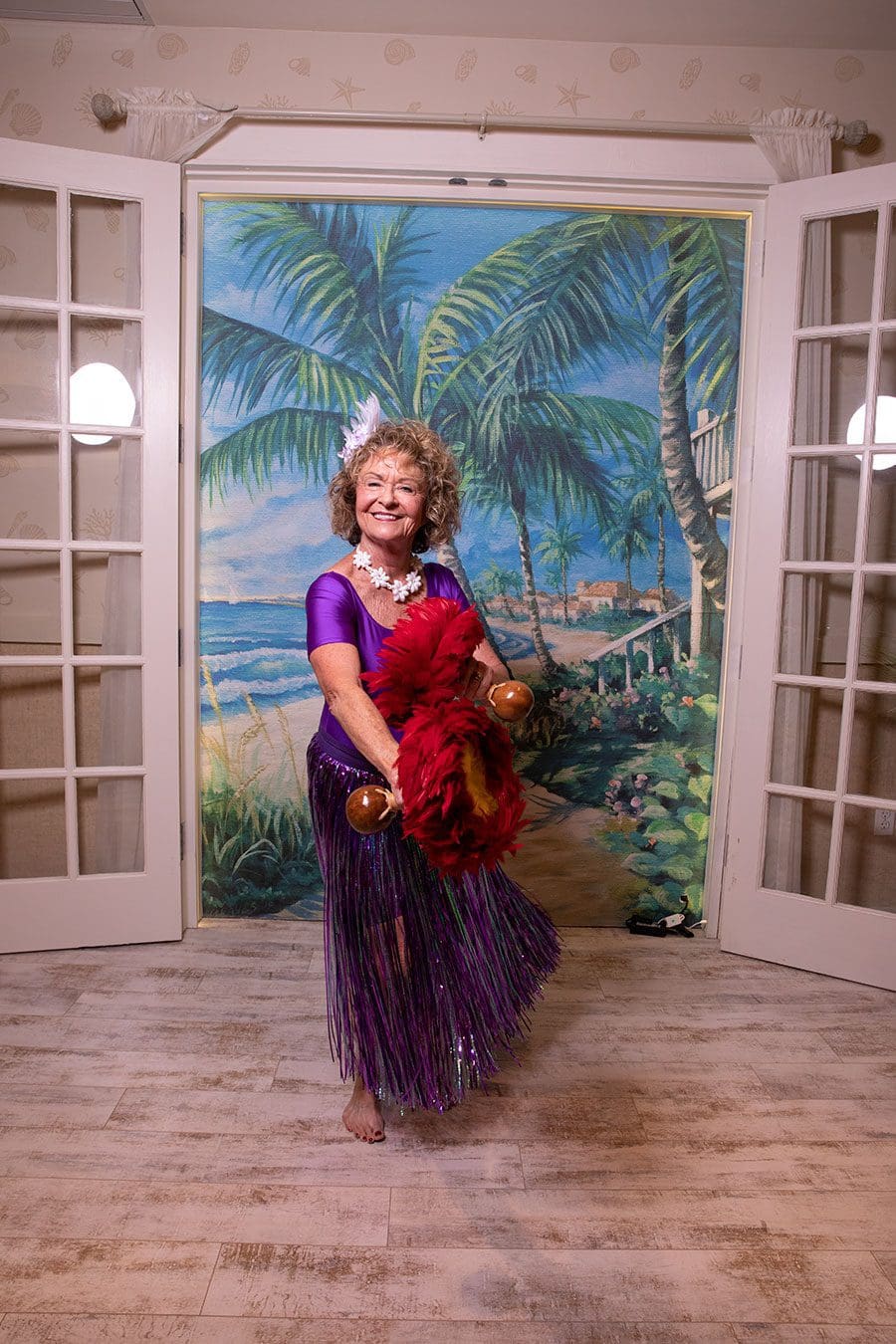 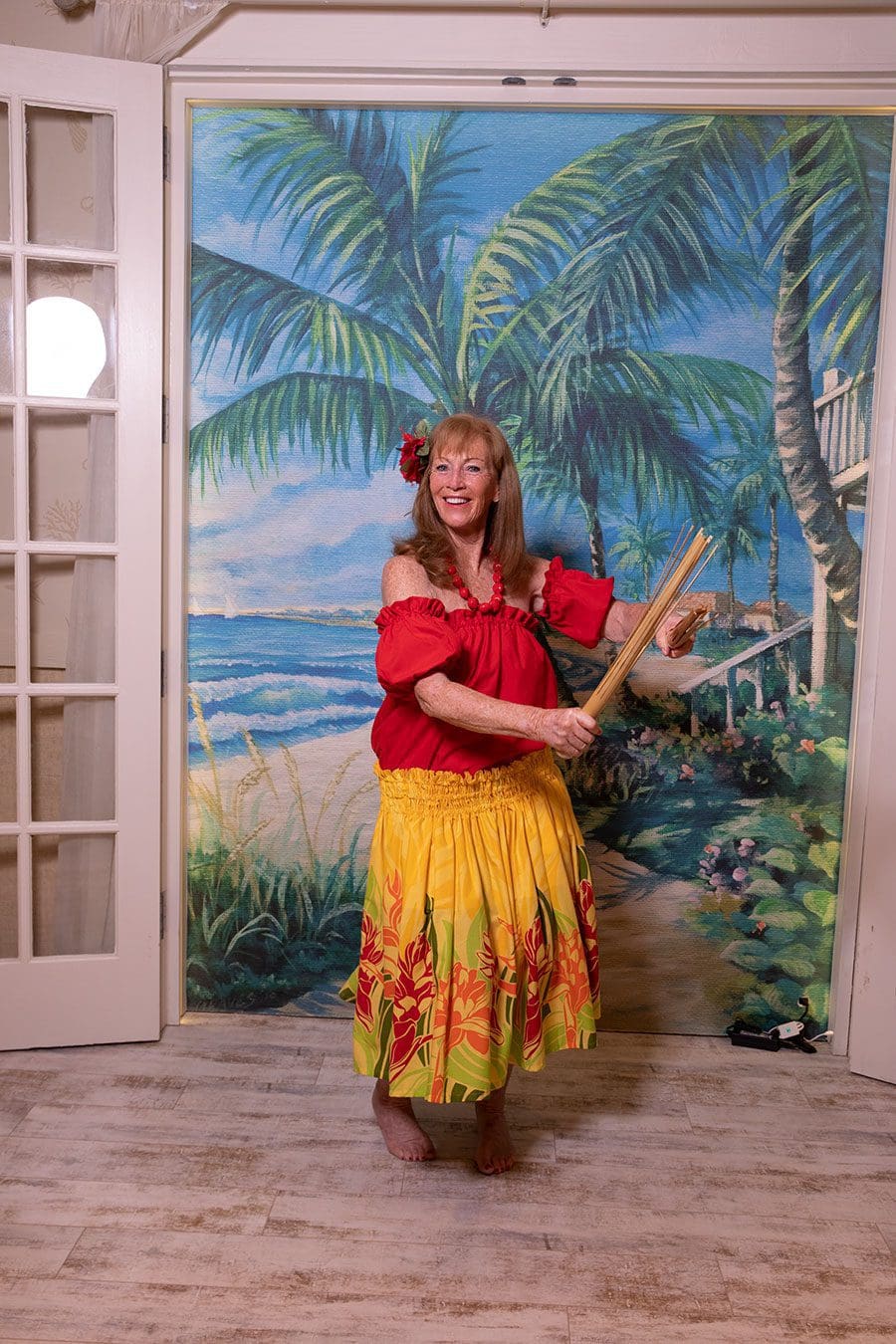 “It was just so entertaining and pleasant to watch. The music is beautiful, their dancing is beautiful, the action was jovial. And that’s not what I remembered about hula practice in Hawaii,” she recalls. Janice now has a greater appreciation for the traditional hulas in the Hawaiian language and the cadence of the Hawaiian songs; “They are very melodic and soothing, so it’s very peaceful.”

Janice also likes when the group incorporates their instruments into dances. They have hollowed out gourds and bamboo pu’ili sticks that take quite a bit of coordination among the hula sisters to avoid accidentally hitting one another.

Violet even took some of the girls to visit Hawaii in 2010 and 2015, where they attended the Merrie Monarch Festival, which Violet calls “the Olympics of hula.” On the islands, the group watched the hula competitions, did workshops, and danced on the beach.

While hula dancers are well known for coconut bras, the troupe has a lot of different costumes. “We have so many costumes. We’ve got several muumuus (a loose dress of Hawaiian origin that’s a cross between a dress and a robe), we’ve got what they call Pa’u (loosely translated dance) skirts, and hula tops we made ourselves to go with them,” Violet says. The theme or songs they are dancing to go hand-in-hand with the costumes they choose. Dawna’s favorite is a white muumuu with blue flowers.