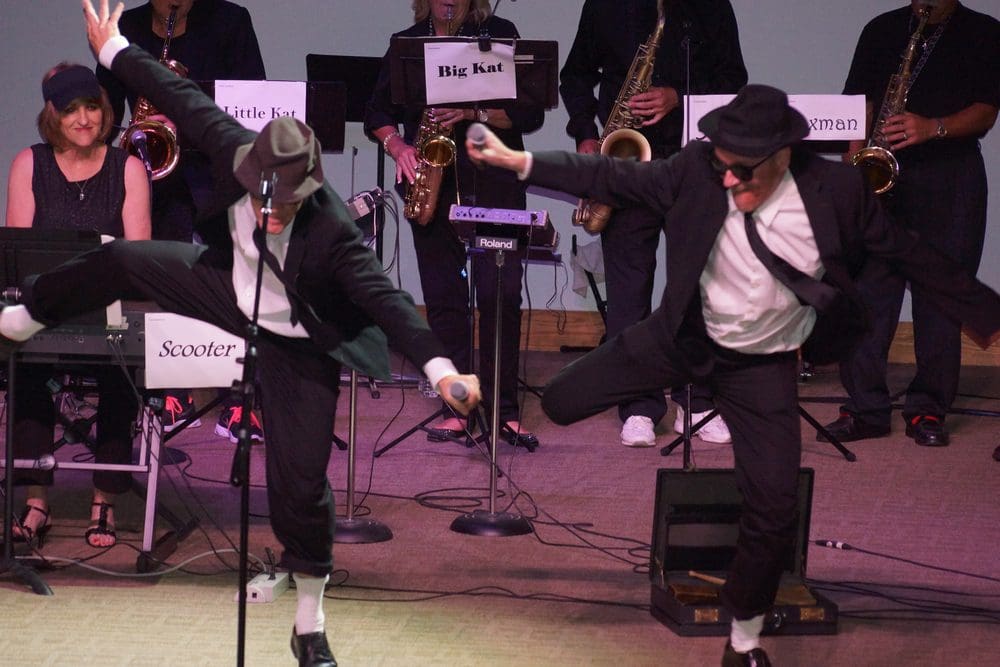 The streets of Lake and Sumter counties are safe today. The Skoluchi Blues Brothers are back in Cell Block No. 9.

But Tuesday night, there was a riot going on after the brothers escaped for hijinks and high-quality blues during a performance at North Lake Presbyterian Church in Lady Lake.

Every other year, the Skolits brothers, family members and musical friends perform as the Skoluchi Blues Brothers to raise funds for various charities and agencies. Over the years, the shows have raised more than $23,000.

This week, they performed three shows to benefit the Operation Homebound meals program and the Fraternal Order of Police. The band played Sunday night at American Legion Post 347 in Lady Lake, followed by two nights at the church.

Tuesday’s performance before several hundred people covered all the hits made popular by John Belushi and Dan Aykroyd, who originated the characters of Joliet Jake and Elwood Blues on “Saturday Night Live” in 1978.

The show has evolved beyond a concert and into a musical with skits and a rough storyline. The show started with the theme from “Peter Gunn,” the greatest TV theme song of all time. The classics included “Messin’ with the Kid,” “Hey Bartender,” “Everybody Needs Somebody” and “Goin’ Back to Miami.”

John Belushi wouldn’t be caught dead singing Katrina and the Waves. But Ralph’s daughter Dawn DiNome pulled off “Walking on Sunshine,” a 1980s pop hit slipped into the blues setlist. The band also can be forgiven for sneaking in another ’80s pop chestnut, “Tell Her About It,” by New Yorker Billy Joel.

Dawn had the unenviable task of trying to fill the shoes, or voice, of Aretha Franklin for “Think,” which was a scene stealer in the 1980 “Blues Brothers” film. But Dawn’s a pro and she sang it powerfully and confidently. She and her father later received a standing ovation for their duet, “The Prayer.”

Ted banged out a great drum solo on “Goin’ Back to Miami” and shared center stage with sons Teddy and Kevin for a scintillating three-man drum-off that included playing in the dark with lighted drumsticks.

The band got a chance to shine with “Squib Cakes,” a Tower of Power song highlighting the horn section, along with “Sing, Sing, Sing” and “New Orleans.”

John and Rob closed the show with a strong “Soul Man” before being chased off stage by local deputies as “I Can’t Turn You Loose” played. They’ll be on hiatus until they’re turned loose for their next performance.