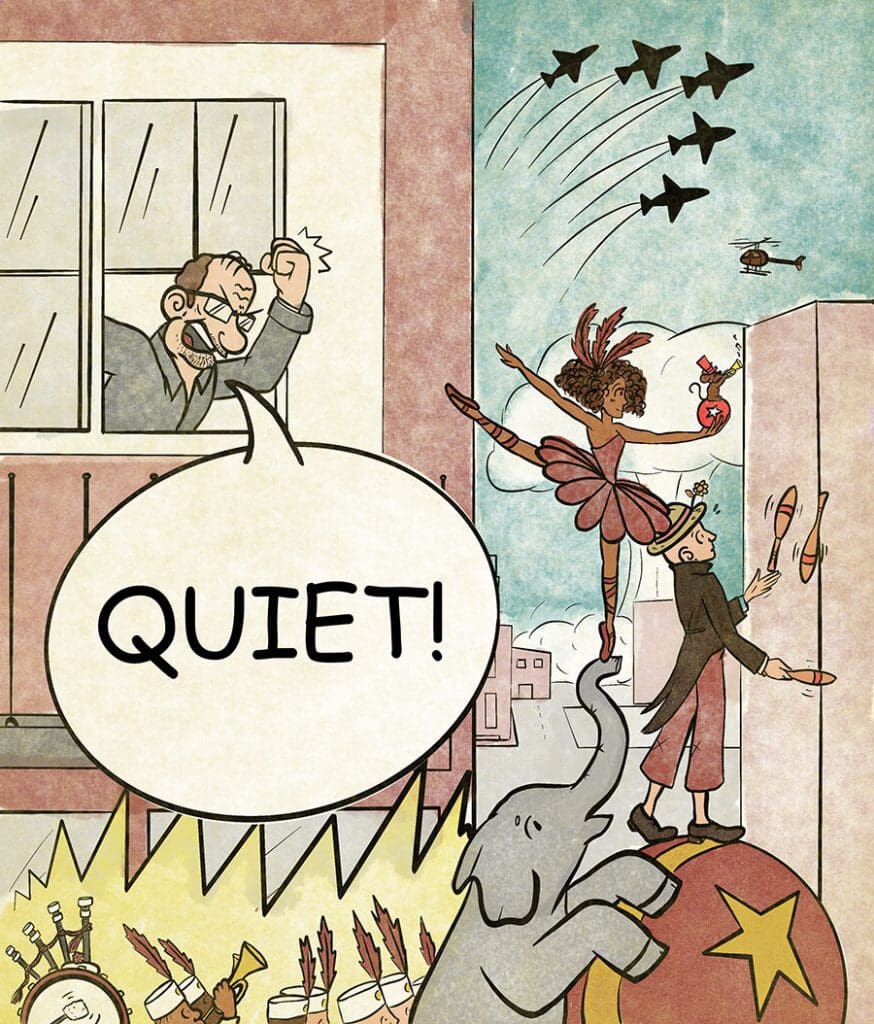 Can’t a guy get a little peace around here?

What is all that noise outside my office window?

Here come Hell’s Angels motorcycling down the street, followed by a high school marching band and the world’s loudest rockers, the Who. Is that the circus? I swear I hear an elephant roaring. Fireworks are blasting into the air, crisscrossing past helicopters that are dodging the Blue Angels’ flyover above a city that sounds like a bomb testing site.

Is a special event coming to town? No, it’s just the daily cacophony of noise pollution. I hate to be “that guy,” but can someone please turn down the world?

That damn Industrial Revolution. Imagine how quiet it must have been on the prairie before machinery. What could possibly disturb you? A coyote howling in the distance? Your neighbor, five miles away, mowing his lawn with grazing cows? A ranch hand playing “Oh! Susanna” on the harmonica?

Back in the 1970s, when environmental consciousness became fashionable, I remember learning in school about different types of pollution. At that time, I thought the worst kind of pollution was noise pollution. I guess I’ve always been oversensitive to noise. Over time, I became a light sleeper, awakened by just about anything. Birds chirping, kids playing, engines running. Oh, joy, it’s another bright, sunny day!

Of course, noise is not limited to machinery. Conversational tones are lost on people who lack self-awareness. The person you’re talking to is two feet away from you. Why are you yelling at them? Don’t walk up behind me in line and start talking on your cellphone. I don’t want to hear “Aunt Gladys needs gallbladder surgery” or “They were out of earwax remover.” 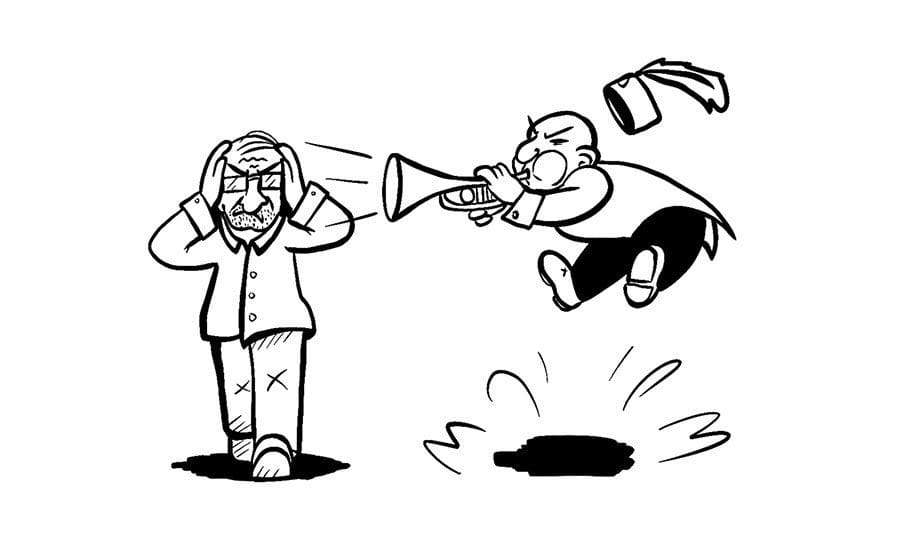 Why do people go to concerts if they plan on talking throughout the show? No one came to hear you; they came to hear Engelbert Humperdinck! At sporting events, I often wind up next to a know-it-all blowhard giving a running commentary, or worse, someone playing the radio broadcast. If I had wanted to listen to the radio, I would’ve stayed home.

Home is no bargain, either, with garbage trucks, lawnmowers, weed trimmers, barking dogs, reverberating bass from passing vehicles and people still shooting off fireworks weeks after a holiday. Then there’s that guy in the little car with the loud motor. The car mocks me as it pulls away. You think the noise is gone, then you hear it again with each acceleration all the way down the street.

I sit down to watch the Lifetime tripleheader of “Psycho Party Planner,” “Psycho Wedding Crasher” and “Psycho Honeymoon Stalker,” and neighbors on each side of me start a symphony of slams with their car doors. One day, you’ll read about a clash in Lady Lake and Lifetime will turn it into “Psycho Noise Hater.”

Is it too much to ask for a little peace? I don’t want to walk through life with headphones as a permanent fixture. Maybe I’ll head to Minnesota. Smithsonian Magazine reports that the quietest place on Earth is an anechoic chamber—free of echo—at Orfield Laboratories in Minnesota. The chamber is so quiet that the background noise is measured in negative decibels, and the longest anybody has been able to stand the silence is 45 minutes. Are you kidding? I’ll try 45 years. Utopia!

Of course, your own noise is different. A lawnmower is almost musical if it’s you who’s doing the mowing. Home renovations sound like the Broadway show “Stomp.” And the stereo can’t be too loud if it’s playing your music.

So, keep it up, noisemakers. The Who plays loud, and I’ve got every one of their albums.