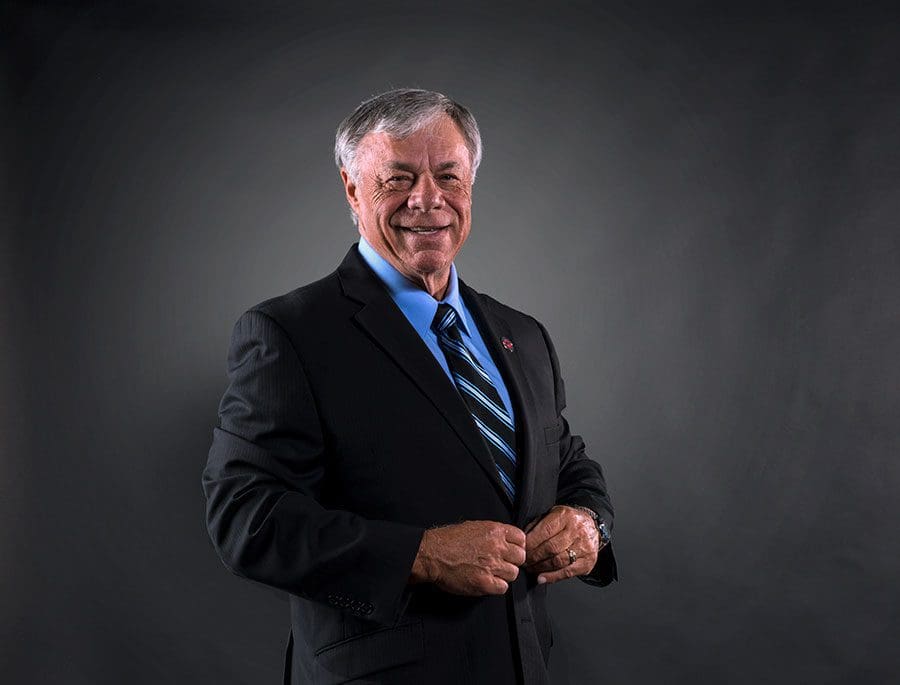 Retired educator Jim Mariucci’s success in real estate is capped with the 2019 Realtor of the Year award.

A good educator shares knowledge and inspires others to continue to learn and excel. Jim Mariucci made that his mission for 33 years as a Sumter County Schools educator, followed by a second career as a Realtor in which he was instrumental in starting a Leadership Development Program for his peers.

The sales associate at Oxford Land Company was praised as a shining example of what it takes to be Realtor of the Year during the Realtors Association of Lake & Sumter Counties’ awards banquet in December at Lake Receptions in Mount Dora.

Jim, 68, of Wildwood, was touted for going “above and beyond” in his profession and for the association. He served as the RALSC president in 2015 and has chaired the Education Committee several times. He was cited for always being open and willing to give his time and talents back to the association, and for his passion and commitment to education.

“It’s a tremendous accomplishment, and I feel so blessed,” Jim says, adding that the coveted award came as a surprise until tidbits about him were read aloud at the ceremony.

“The first clue was ‘he’ and then ‘Sumter County School System,’” says Jim, who was nominated by last year’s winner, Kim Ducharme-Levensohn, a Realtor with Morris Realty & Investments, based in Leesburg. “My family has known Jim for years,” Kim says. “He is just a tremendous man on the inside and out. He’s professional and has integrity. He’s always willing to give back to the community and to the Realtors Association.”

Kim served with Jim when he was president of the association and she was president-elect. His nickname was Pops, and Kim says Jim was a father figure and mentor to her.

“So, when I became president, he gave me a teddy bear that said ‘Pops’ on it. Anytime I had a question or concern, he was there to help,” she says, adding that Jim was the person she could always go to for advice. “And it’s still that way,” Kim adds.

Robbie Shoemaker, a broker with Flamingo Real Estate & Management in Wildwood, was a student and baseball player when he first knew Jim as his baseball coach before the two men were co-workers at Oxford Land Company.

“I was very excited and very happy for him,” Robbie says of Jim being named the top Realtor.

“The Realtors Association award is not for the amount of the deals that you do or income (in sales). Jim has been heavily involved in education and has truly given back to the industry with his time and energy.”

Robbie adds that Jim has been active in real estate education on the local and state levels.

“By the time he got involved in real estate, he started serving on the board and he was always taking classes to better his skills,” Robbie recalls. “He would do anything for you. He’s just a phenomenal person. He’s also a Southern Jersey boy!”

Jim left his childhood home in Rahway, New Jersey, in 1969 to go to college and play baseball for four years at Saint Leo University, outside of Dade City. He welcomed the chance to get away from the snow and cold winters in New Jersey for warm, sunny Florida. He was joined at Saint Leo by his high school sweetheart, Kathy, who became his wife nearly 48 years ago.

“In my senior year, the athletic director told Kathy that there was an opening in Wildwood for a teacher position,” Jim says, adding Kathy was encouraged to apply to gain experience.

Once Kathy was offered the job, she told school system administrators about Jim’s degree in physical education.

“We both came to Wildwood and have been in Wildwood ever since,” Jim says, recalling the move in 1973, when Wildwood had only one traffic light and the agricultural area was a far cry from the 50,000-some population in Rahway.

“But I just kind of fell in love with Wildwood, the area and the people,” Jim says, adding Wildwood has been a wonderful community in which to raise their two children, Rick and Laurie.

Jim’s 33-year career with Sumter County Schools began with a job as Wildwood Elementary School’s physical education teacher for two years, followed by working at the intermediate school. He also taught high school math for 16 years, and served as the school system’s curriculum coordinator, baseball coach and principal at the intermediate school and middle school, before going to the county office as director of secondary education. He retired from the school system in 2005.

He enjoyed all phases of his education career, calling it gratifying on different levels.

“The little kids always want to come up and hug you. They’re very, very impressionable, and I enjoyed working with the older kids with a little bit more maturity on them. You could talk to them a little bit differently than the little kids,” says Jim, adding that on the administrative side, he dealt more with parents, staff and contract workers.

After Jim retired, his good friend Reggie Caruthers, a broker for Oxford Land Company, encouraged him to go into the real estate field.

“We were both in Wildwood Rotary at the same time,” Jim says. “And Reggie said, ‘Why don’t you get into real estate? You’re a people person.’”

Jim hesitated—at first—before deciding to give it a try. He earned his real estate license in 2007.

“My first transaction was a residence, a first-time home buyer for his first house, and it was exciting. I finally made a little money,” Jim says, adding that Reggie was a valuable mentor about the real estate business.

“It was a completely different field from what I was used to. Dealing from the education field to the business world was kind of a learning curve,” Jim says. “Real estate was completely different. All of a sudden you get a phone call on a Saturday morning of ‘I’d like to see your properties,’ so that was a big thing to understand and deal with.”

He became involved in the Realtors Association of Lake & Sumter Counties, a group of about 2,500 members, and served on the board of directors from 2011-2016. In addition to being board president in 2015, he also served as chairman of the Education Committee for two years and oversaw policies on two different occasions.

Jim’s commitment to education led him to starting the Leadership Development Program, which resulted in 17 people in four years becoming involved in the board, and several other members chairing different committees.

“This kind of goes back to my education days, knowing that when you start looking at administration, you’re looking at a flow process,” Jim says of getting Realtors active in leadership with the association and in attending the Florida Realtors’ conferences, including the Great American Realtors Day in Tallahassee.

“We work extremely hard,” Jim says, adding that Realtors guide a gamut of clients, from baby boomers to millennials, through the process of buying or selling properties.

“There can be anxiety for buyers in getting qualified, getting the loan and making sure they have all the ducks in a row. It can be overwhelming,” Jim says. “And our job is to walk them through that, to make it come across as comfortable as it can be, and they can understand.”

Jim says the best part of being involved in the Realtors Association of Lake & Sumter Counties is interacting with his peers.

“I really enjoy the networking,” he says. “There are a lot of hardworking Realtors out there and it’s great to be associated with them.”

Favorite room in your house?
Living room to watch TV.

The best thing about coming home?
Seeing my wife.

How many homes have you owned?
One. I live in the same house we had built in the 1970s. It’s where our two kids grew up.

What do you love about Wildwood?
My friends are here, and my family is close, in Ocala and Lakeland.

What makes you laugh?
A good comedy.

How do you spoil yourself?
By going fishing.

Which historical event do you wish you could have seen with your own eyes?
The Yankees winning the World Series.

Who do you go to for wise advice?
My wife.

What do you still want to learn?
Anything that I can.

What was the best advice you received?
The toughest part of being good is that you have to prove it every day. Every day is new.

Would you go back to life without the internet?
Heck yes!

What makes your home feel like home to you?
My family.

What are the little things in life that you enjoy?
Fishing, family time and being able to see my grandchildren play soccer.