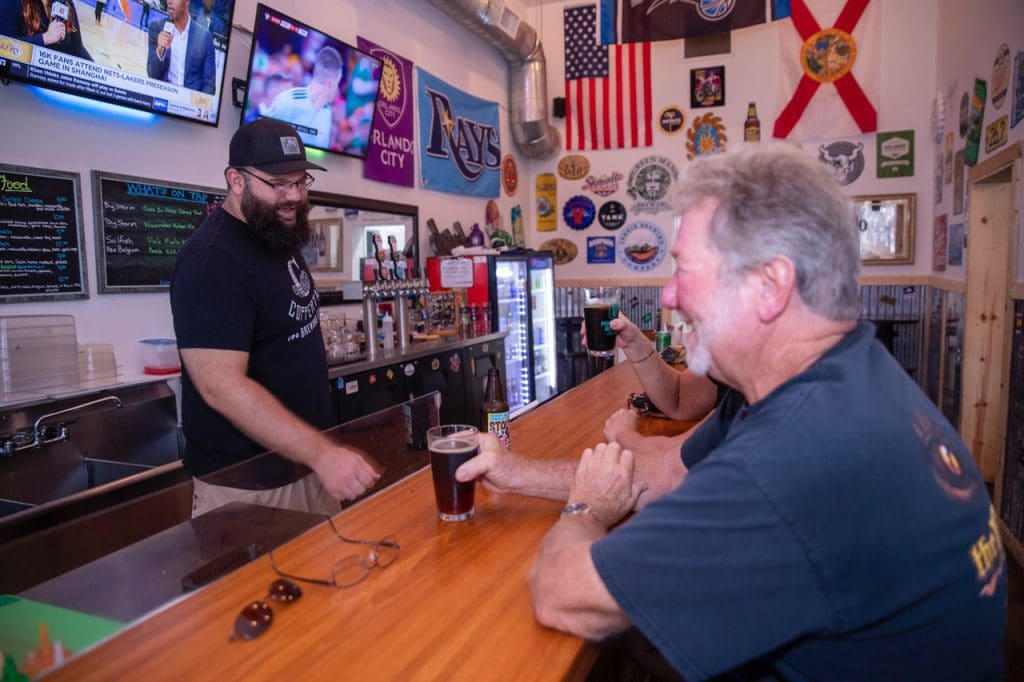 Customers enjoy a pint at the Pint Sized Pub in downtown Leesburg. // Photo by Anthony Rao

Back in 2016, 24 Tap Room opened in Leesburg. The bar featured 24 craft beers on tap and brought a lot of new people to the downtown area, according to co-owner Alberto Cisneros.

“Within five or six months, we were so busy because there’s nothing to do here. All the young people flocked to us and I think that’s the most important thing, that it’s a lot of young people. From 21 to 50, everybody was there,” he says.

After enjoying much success, Alberto and his business partner planned to expand 24 Tap Room. The natural progression was to become a brewery, Alberto says, so that became the goal. About two and a half years into their three-year lease, they started looking for another location where they could start the brewery. For financial reasons, however, the brewery had to be put on hold, and in the meantime, 24 Tap Room was closed.

The businessmen weren’t tapped out, however. They soon would open the Pint Sized Pub and the Brick & Barrel Public House, bringing nightlife and a new crowd to downtown Leesburg as they virtually took over the block. And they have two more projects in the works.

After 24 Tap Room closed, Alberto and his business partner began working other jobs simply for income. Meanwhile, they found the site that would become Pint Sized Pub at 110 S. 5th St. From the day they bought the space, they managed to get the bar up and running in just two weeks because they had all the necessary supplies from 24 Tap Room, so they mainly had to focus on cosmetic touches and putting everything together.

“This building is owned by (Leesburg businessman) Tom Frost, and he was impressed we did everything in two weeks, so when Brick & Barrel came available, he came to us first,” Alberto says.

They then began working on Brick & Barrel, which they opened at 209 W. Main St. within about four weeks because it came furnished as well, with a full kitchen. Again, the main jobs they had to tackle were cosmetics and a menu.

Now, Alberto is working on two more businesses nearby. Right next to Brick & Barrel, a space opened up that will soon become a cantina, serving tacos, margaritas, mojitos and other cantina-style food and drinks.

Also, Mammoth Oak Brewing is the brewery that will finally come to fruition at the old 24 Tap Room location, 1107 W. North Blvd., Suite 26. Although Alberto loves drinking beer, he still has no idea how to make it. He hired brewmaster Isaac Johnson to do the brewing for Mammoth Oak, and the beers made there also will be served at Pint Sized Pub and Brick & Barrel.

Both Mammoth Oak Brewing and the cantina on Main Street are set to open within the next few months.