Phyllis Morgan Chetakian, of Howey-in-the-Hills, discovered a talent for the piano at age 3.

“I pursued my talent through the years playing at many churches and civic events in California, where I raised five children, pleased a demanding husband, and kept a house ready to entertain guests and friends at a whim,” Phyllis says. “I thought this was my role in life and I was very content with the arrangement. Little did I know what was in store as I answered an urgent phone call that Saturday morning.”

Phyllis was a member of the Garden Grove Community Church, now known as the Crystal Cathedral. She knew the guest speaker and soloist to entertain 1,000 women was to be the “Champagne Lady” of “The Lawrence Welk Show”: Norma Zimmer.

“The lady on the phone was very disturbed as she told me she had just heard from Norma and [Norma] was in dire need of a pianist. It seemed her accompanist came down with stomach flu and was unable to perform with Norma,” Phyllis says. “Those days…in the ’70s…were before electronics, and vocal artists sang with live backgrounds. Well, it seemed I was elected to rush over and meet Norma since I was one of the pianists at the church.” 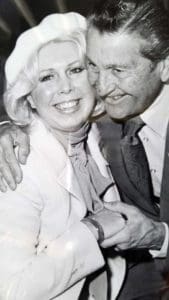 The door opened and in came a charming lady in a pink St. John suit carrying a large attaché case full of music. She introduced herself and handed Phyllis a written list of songs.

“The clock was ticking as I read the list and looked up at Norma and said, ‘I know all of the songs, I don’t need the music.’ As fate would have it, we went on stage and at the end of the show, Norma told the audience that she wanted me with her from then on,” Phyllis says proudly. “Maybe she didn’t want to drag the attaché case with her.”

Both women were elated to receive a standing ovation, and it changed Phyllis’ life.

“I went on to be her traveling accompanist for many years, sometimes joining the band and being with Lawrence Welk,” Phyllis says.