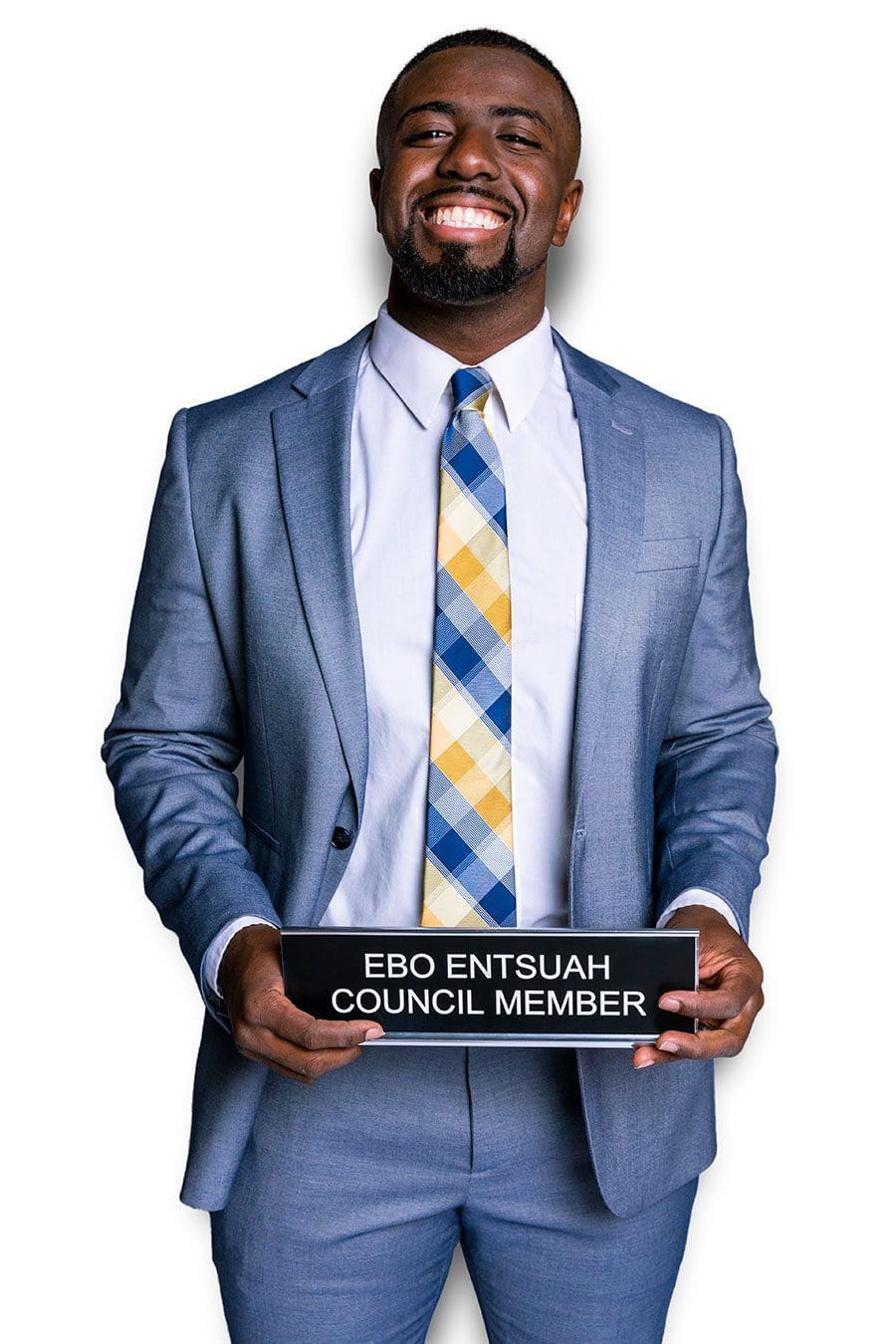 What inspired you to become involved in your community?

I’ve always had a heart to serve and I think I’ve gotten that from my parents. My mom is a family physician, my dad is a civil engineer, and they both actually immigrated from West Africa. Just seeing them always wanting to serve the community and fellowship with other people kind of imprinted on me. Whether it’s educating or just helping through community service, I just knew I wanted to serve. From there, the first step was to attend meetings and become more educated on various issues that were going on in the city, and I was able to do that. I started with going to council meetings, but I also continued going to planning and zoning meetings, and then I went to a meeting with residents from throughout the city just to hear their thoughts on various issues that affected the residents of Clermont and some of our institutions. I learned a lot in the first six to eight months, then I jumped in head-first and it was an exciting process.

What was your reason for pursuing Seat 4 in Clermont’s 2020 special election?

After college, I was a legislative aide on Capitol Hill, so the political or legislative process has always been one that’s been very interesting to me. So, when I came back home (from Tallahassee) about three years ago, I hit the ground running. I know at a higher level you can impact positive change to residents and to community members, so I felt the best way for me to get involved was by running for council, or at least being part of some board. I joined as many nonprofit boards as I could, plus I attended as many meetings as I could to get the lay of the land, seeing where I could find myself, and finding where I could help people the most. That was two or three years ago, and that’s when I started my first council run.

When the special election was announced, I was at a crossroads and I wanted to kind of decide if I should run again or whether I should take a break and see if I could affect change in another area, but everybody was saying, “You should do it, you should do it.” I had just recently gotten engaged and felt that I had to talk with my family and with my fianceé to get a better sense of what they thought, which was them telling me that I was gonna kick myself if I don’t at least try.

What was your reaction to winning?

It was such a joyous moment. I was bewildered and just overcome by emotion because it felt like we had been doing this for so long, with it being about 2 ½ years since I first ran. To see that perseverance come to light and finally see the results I wanted, was an emotional moment. I don’t think there was dry eye in the house. I felt like all our hard work had paid off. We had done such a great job and built such a strong base of support and just people who believed in me. I was so focused on taking all their beliefs and kind of putting them on my shoulders trying to get elected, so it really felt like a load was taken off when we finally got the news. At the same time, I immediately began thinking about what comes next. We had worked so hard talking about doing all these things, and now I was in the position to really get to do them, so I was thinking, ‘Let’s get to work; let’s put our foot forward and hit the ground running.’

Thoughts on being the youngest councilman elected in decades:

I ran on the premise of bringing a new perspective and I think I have been able to do that, but at the same time, everybody on the council kind of brings their own specialty to the table. We have such a diverse board and such a variety of minds and I think it represents Clermont really well. Also, in our city, with a population of over 40,000, no one person is the same, so just being able to work with all these people, trying to bring up issues that will help our residents has been super exciting. Every now and then, there are brief moments of self-doubt where in my head, it’s like, “Are you experienced enough?” but at the same time, I know I’ve gotten this far because of how hard I’ve worked and because of the experience I’ve gained in the past. I know I belong here and I know that with the people sitting next to me, we can achieve great things.

Do you see yourself as a role model for the younger generation?

Yes, I feel my journey can inspire hope in the younger generation. I know I have been blessed to have really good mentors and teachers at East Ridge, in college, and even afterwards. Now it’s my turn to kind of provide that mentorship to the youth here in Clermont. Clermont’s got a really big population of young adults and teenagers, and it really is important to get them involved. A lot of people say that it’s nice to have somebody that you can look up to and that you can kind of model after, so I actually have started with that and taken up a couple of mentees myself. In a way, it’s kind of odd, because I’m only a couple of years older than they are, but I really feel like I’m learning from them and they’re learning from me. I love education and feel that education is the key to anything you want to do and it’s so important that we’re able to properly educate our students for the future and for life. I’m glad to be a part of that.

What do you hope to accomplish?

I have a bunch of goals, but one of the biggest things is that I want to increase the relationship between our small business owners and our government. In fact, one of the main campaign promises I wanted to come through on was the creation of a small business council in the city. This would be an advisory board that allows our small business owners, current and former, to essentially form a better relationship with our council and our city government. It will help us to figure out how to better aid them in any way possible. Also, just making sure we’re expanding and participating in smart growth and smart development.

How long have you lived in Clermont?

I actually moved to Clermont with my family in 2003. We moved from Toronto, where I was born. We immigrated here when I was pretty young, and I actually grew up in the Lake County school system and graduated from East Ridge High School. Apart from going away for college and working in Tallahassee for a time, we’ve been in Clermont for a while and I consider Clermont my home.

So, for me, Clermont is one of those places that is unlike any other. It really has a hometown feel, while also having a budding population. You can meet so many different people from so many walks of life and they all converge in Clermont. I’m really excited for the future and I know we have so much going for us. I believe Clermont is at a pivotal point with all the plans in the works for its future, and I know we’ll be able to take that next step into the next era.

Do you appreciate feedback from citizens?

Definitely, yes! When I ran, I wanted to be the most successful and most transparent councilperson ever, and I think I’ve really started to make strides towards that. I also feel that it doesn’t matter if I agree with all residents, that’s not the point. The point is that people need to feel like their voices are being heard and if there are any issues they have, they need to know we can come to an agreement with them. Opening up a dialogue is the best way to solve problems and something that’s not done well enough these days. And that’s why I’m really proud of the effort that’s being put forth to include people in council meetings and in general, on a national scale.

Words to live by:

For people who don’t know, I actually played football for Florida State University for a couple of years and in that time, our head coach Jimbo Fisher had a saying, “Find a crumb.” Basically, what that means is if you want something so bad you become very hungry for it, and every time you essentially find a crumb, you’re gonna become hungrier and you’re gonna want more and more. When you’re hungry, you’re gonna find a crumb and keep going and going with trying to get to your goals until you’re full. And even when you get there, just keep going some more. It’s a little corny, but you know, it’s something that I’ve used forever in my everyday life. It’s pushed me to get to where I am, and though I know I’m not even close to where I would like to be, I just continue finding crumbs and continue pushing myself. It’s what I aim for and what it’s all about; continuing to stay hungry no matter what you bring in and then continuing to climb every day and get your one percent.

What advice would you give others wanting to serve in any capacity?

Get involved and don’t be afraid to make mistakes.

What other boards do you serve on?

I served as the former vice chairman of the City of Clermont’s Planning and Zoning Board and I am currently on the Cooper Memorial Advisory Board, Lake-Sumter Seminole Club Board, the Give A Day Foundation, Florida State University Young Alumni Council, and Lake County’s Tourist Development Council.