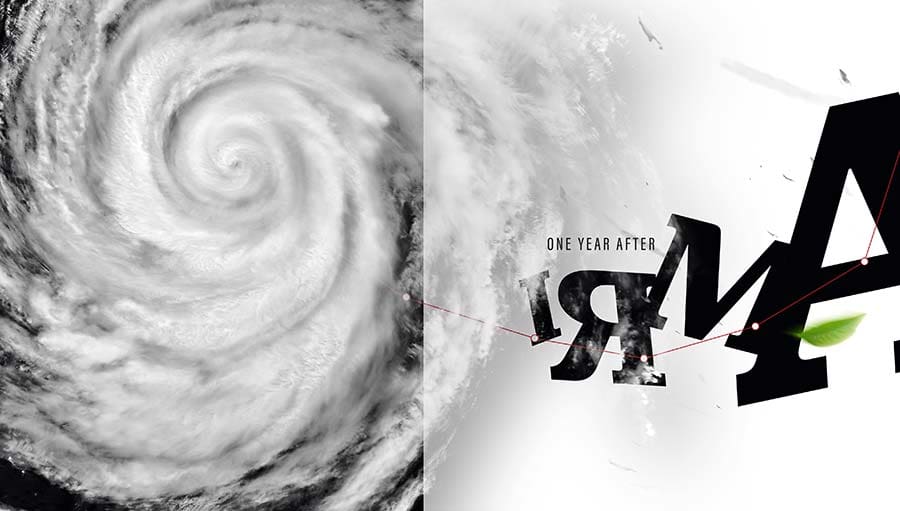 The hurricane was a thunderous wake-up call for Lake and Sumter residents.

Volunteers armed with chainsaws came from all over the Southeast. Federal agencies offered food and financial relief. Neighbors helped neighbors who had to leave their homes because of fallen trees or flooding.

One year ago, Hurricane Irma wreaked havoc across Lake and Sumter counties. But as much as the state suffered, Irma actually was at its strongest long before reaching Central Florida. This sobering reality still haunts the region: it could have been worse.

One emergency manager says Irma’s punch left the area with only a “black eye,” but scars remain. The city of Tavares, for example, still is rebuilding its waterfront after suffering millions of dollars of damage. Blue tarps dot the landscape in both counties, marking houses that haven’t been repaired.

“People don’t really understand it’s long-term recovery,” she says. “But it’s happening and we’re finally able to use the funds and we’re all very thankful for it.”

Administrators in Lake and Sumter have reevaluated emergency response plans. But they say the biggest lesson learned is that residents need to prepare better. Irma was a wake-up call for residents who hadn’t experienced a tropical cyclone before, says Tommy Carpenter, manager of Lake County’s emergency management division.

“It shows that we can have one,” he says. “It wasn’t as bad as initially forecast, but we got beat up pretty good over a 24-hour period. It is important to be prepared during the Florida hurricane season.” 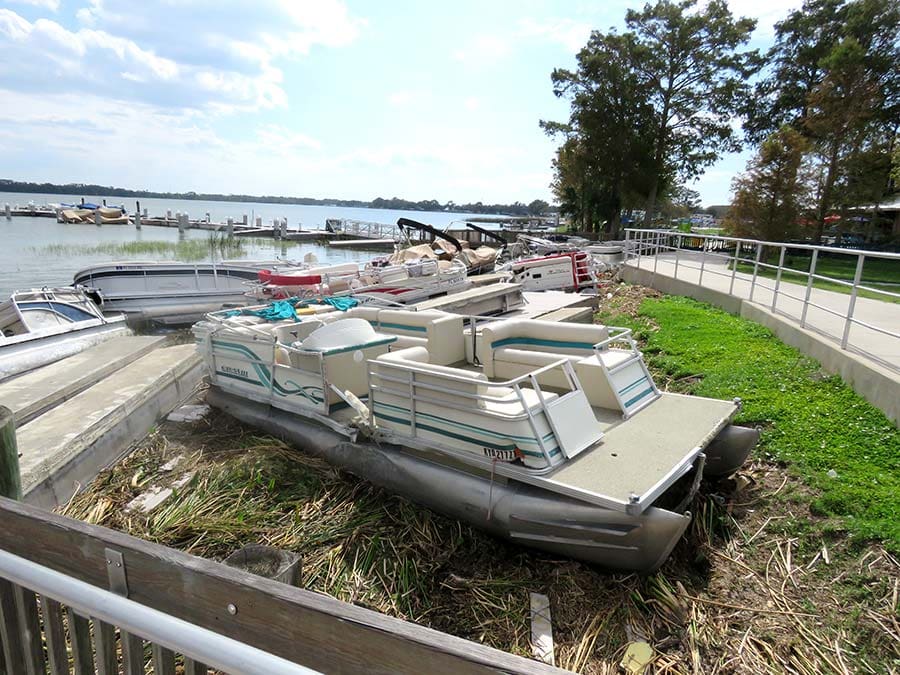 Irma tossed boats around and destroyed the Tavares marina in September 2017. // Photo provided by city of Tavares

Irma was one of the strongest Atlantic hurricanes on record and one of the costliest with estimates of $50 billion in losses, according to the National Oceanic and Atmospheric Administration. What made Irma unique was the wide swath it cut, hovering over the entire Florida Peninsula and bringing wind, rain, and storm surge to virtually every spot in the state. All 67 counties declared states of emergency and closed schools and government offices.

Irma made landfall Sept. 10 in the Keys as a category 4 hurricane and struck southwest Florida at category 3 intensity, according to a National Hurricane Center report. Once inland, Irma weakened. The hurricane’s center passed between Tampa and Orlando by 2am Sept. 11 as a category 1 storm. Overnight, Irma produced sustained winds near hurricane force with gusts of 70 to 90 mph across the entire region, and gusts of 100 to 110 mph in the eyewall, Lake County reported.

In the aftermath, lengthy power outages, downed trees, debris cleanup, and flooding made life miserable. Heavy rainfall caused flood levels in the Withlacoochee and St. Johns rivers, and the community of Astor and the Lake George area were severely inundated.

But many homes required long-term assistance. This summer, a case manager met with homeowners who are still in need of repairs, including roofs, interiors, ceilings, drywall, flooring, and more. Volunteers assist with interior repairs, and Brandi had roofing contractors lined up to start work on three homes by the end of August. Almost all of the open cases are in Lake. Brandi says faith-based organizations and local churches aided many residents in Sumter. 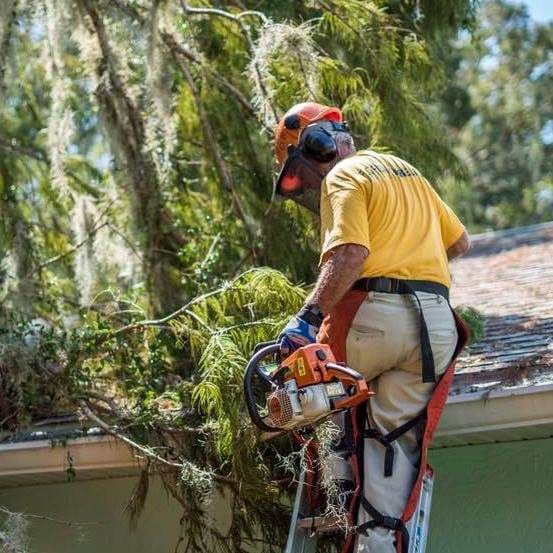 LASER received $400,000 in grant funds, but the key word in “long-term recovery” is “long,” she says. The grant process is cumbersome, and it takes time for funds to reach the organization from national, state, and county sources.

Overall, Lake County tallied more than $41 million of damage. Sumter County government reported damage totaling about $2.7 million, according to Olga Rabel, assistant county budget officer. That figure doesn’t include totals for The Villages, which in addition to downed trees, debris, and flooding also suffered damage to buildings and infrastructure, a news release states. A Villages-wide estimate is not available, the district clerk says.

“Lake County, in terms of damage, was extremely lucky,” Tommy says. “We got strong wind and rain, but not the sustained hurricane-force winds.”

Tavares was not so lucky, as the city’s seaplane base and marina were destroyed. A rebuild project is under way, with a design cost of $750,000 and construction estimated at multimillion-dollar levels, City Administrator John Drury says.

“Once it is complete, we will have completely recovered from Irma here in Tavares,” says John, who’s also looking forward to a new public safety complex, currently under construction, that will house the city’s emergency operations center.

Tommy is discovering more groups are interested this year in public presentations about hurricanes, and he’s drilling home the importance of preparation. Lake County administrators also learned a lot from Irma after taking steps they never had taken before: opening 14 public shelters, transporting 452 people to and from shelters, and housing 600 pets. The emergency management division has since worked with the Lake County School Board and the sheriff’s office to better facilitate future shelter operations, Tommy says. 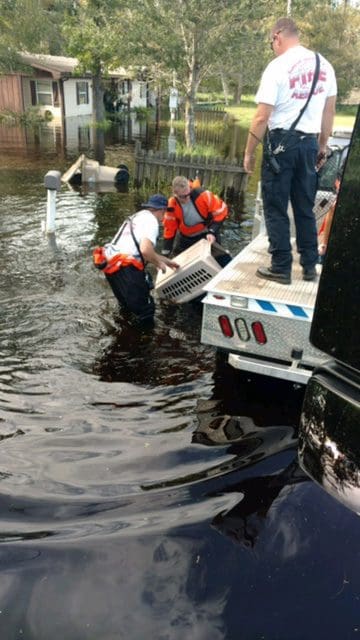 A pet is rescued amid heavy flooding in Astor last year. // Photo provided by Lake County

Similarly, Sumter County has made improvements to processes involving shelters, damage assessment, and debris pickup, Emergency Management Director David Casto says. For example, the county now has an agreement with the school district to make all school shelters pet-friendly. The agreement also enables the county to seek federal reimbursement for shelter costs.

The biggest upgrade since last year is the opening of two buildings, The Villages-Sumter County Public Safety Center and a renovated backup center in Bushnell. The new facilities give the emergency management division more capabilities, David says.

He considers Irma to be one of the most “frustrating” natural disasters he’s ever seen “because of the long-term power loss and the dependency people have now on electricity, the internet, and the connectivity that goes along will all that. Irma proved the point that as a society, we depend on technology and when we’re without it, that creates stress.”

Like his colleague in Lake County, David also cites an unfortunate lack of preparation by many residents for setbacks such as days-long power outages and flooding.

Hurricane Irma by the numbers

Estimated cubic yards of debris collected in Lake—six times more than the total for 2016.

Consumers who lost power in Lake.

Irma’s top wind speed as a category 5 hurricane on Barbuda.

Indirect deaths caused by Irma, including 77 in Florida.

Direct deaths caused by Irma, including 10 in the U.S.

Most inches of reported rainfall, from Sept. 9-12 near Fort Pierce.