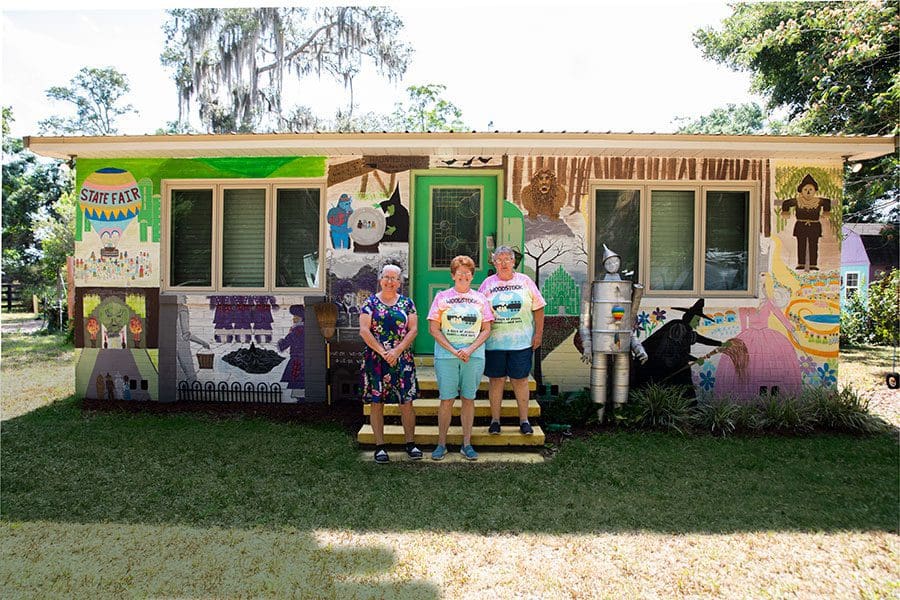 While driving around in Wildwood near The Villages, one might notice what many refer to as the Wizard of Oz house, since a mural that spans its entirety, is in honor of the classic film.

“I realize that this joyful house is not for everyone, but it brings a lot of people smiles! We could all use a little happy expression in our lives,” says artist Robin Lasby Navarro, who painted the mural on the house her sister Deb Lasby and wife Kenda Robinson bought in 2006.

Deb says that upon purchase, the 1950s-built wooden house located at 8802 County Road 121, was painted a drab brown color, and was in serious disrepair inside-and-out, so they embarked on major renovations and remodeling. In 2007, a tornado passed through their yard and downed several trees, but the house remained in-tact, though the screen porch and some windows were damaged by flying debris.

It was then Deb says they decided to repaint the house – which they nicknamed the tornado house – a more vibrant color (teal) and soon after that, with the Wizard of Oz theme since they are big fans of the movie. 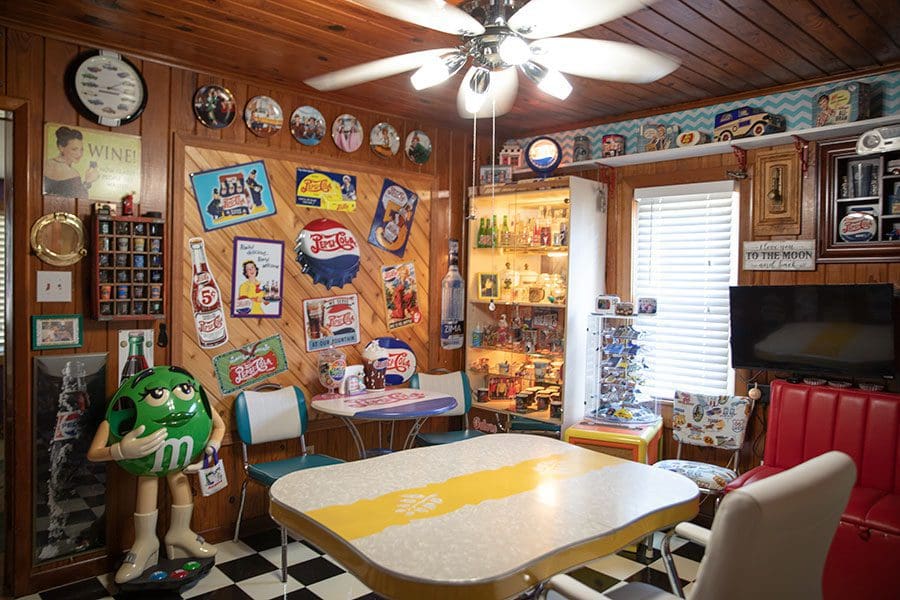 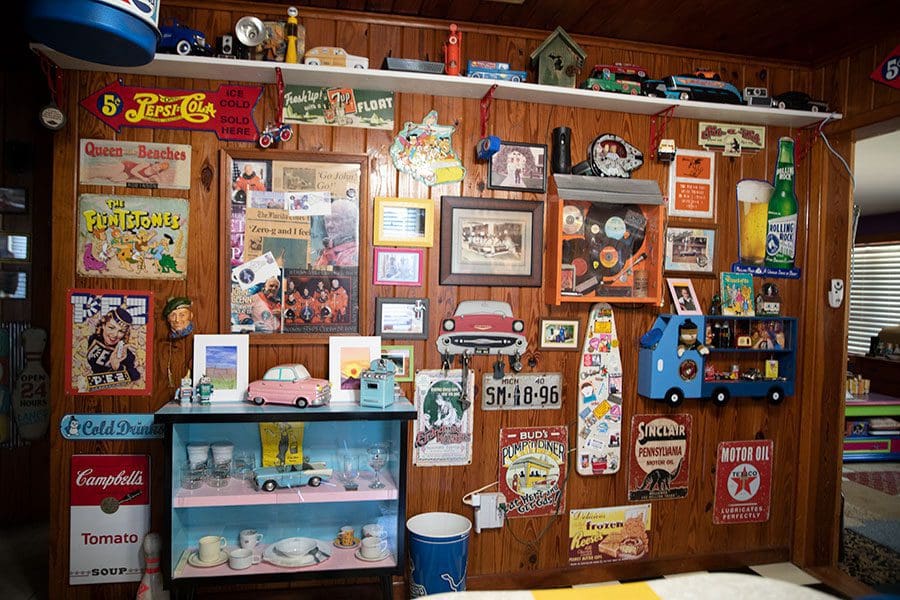 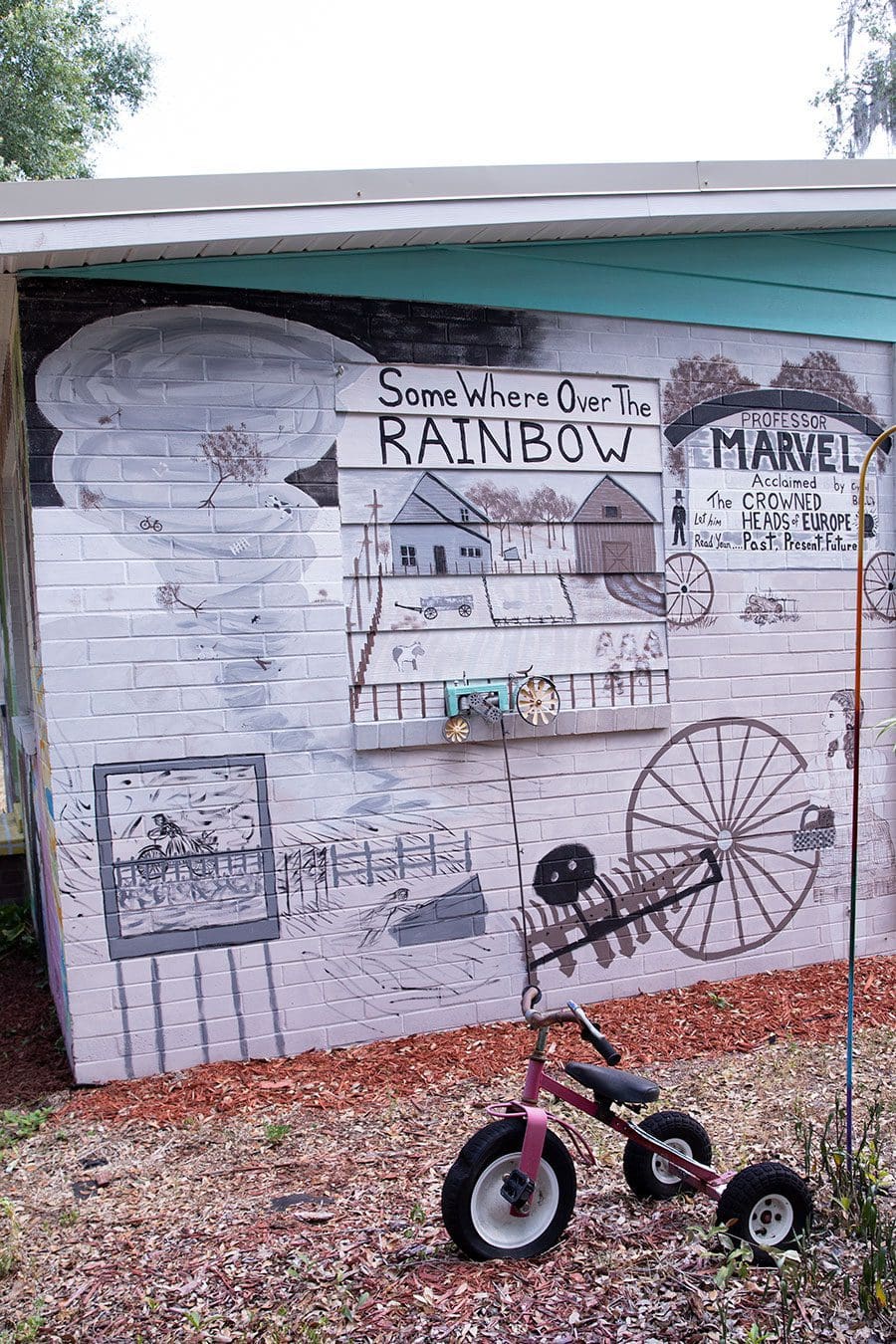 “We thought it would be fun to zip up the front and thought of a mural of sorts. The Oz idea was a play on the tornado history. Another thing was seeing all the boring ‘vanilla’ houses around us,” Deb says, explaining that the front of the house mainly depicts scenes and characters from the Land of Oz, while the sides and back are reminiscent of other parts of the movie, including its black and white beginning.

“The painting was a labor of love with my sister Robin and I,” Deb says. “Once we started, it took about 3-5 months.”

Today, Deb says people pull up to the house to take pictures of the mural and selfies of themselves with it, and she and Kenda welcome that, as long as they try and pull off the road when doing so.

The inside of the house features vintage and retro collectibles, art, and memorabilia the two acquired over the last 40 years and on occasion, it is open for tours. At one time, tours were given on a donation basis to raise money for a kidney transplant Robin’s daughter was in need of.

Deb says they welcome passersby and just ask that people “toot their horns” or come to the door if they have questions or want to speak with them, instead of wandering about the property.

“We love how it makes people smile,” Deb says of the house.