Recently, Clermont City Manager Darren Gray was selected to be a part of an elite statewide leadership program. According to the press release, Leadership Florida has included Darren in its prestigious Cornerstone Class 38 for 2019-2020. Members of Leadership Florida represent the highest levels of leadership from Florida’s various diverse regions.

Darren will join 55 other influential leaders and is one of five in the class representing East Central Region. The program covers an eight-month period where members will go to Westgate River Ranch Resort in Eastern Polk county, Orlando, Jacksonville, Tallahassee, Miami, and Boca Raton.

“Mr. Gray is truly worthy of being selected for the Leadership Florida program,” Clermont Mayor Gail Ash says. “It is further validation of the outstanding job he has done as Clermont’s city manager. His vision for what Clermont could be has resulted in initiatives that have made our city a prime location for business, recreation, athletics and living. Our city is truly fortunate to have such an exceptional leader guiding us into the future!”

Clermont’s rebrand and the award-winning master plan were both accomplished under Darren’s leadership. In addition, the city has earned numerous awards and recognitions.

“It’s an honor to join this incredible group of leaders across the state,” Gray said. “I’m excited to connect with everyone and to bring back what I learn to benefit the City of Clermont, Choice of Champions.” 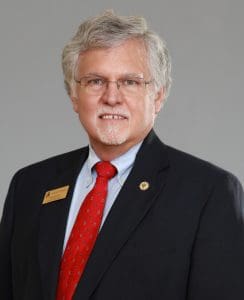 Mullins, to fill Seat 2 held by the late Ray Goodgame. Keith served from 1999-2017 and served on the Planning and Zoning Board prior to that.

A resident of Clermont since 1988, Keith owns a wine store, “Bacchus Vino Etcetera, in downtown Clermont. He currently is treasurer and past president of the South Lake Kiwanis Club, and a member of the Clermont Downtown Partnership and a board member for the South Lake Animal League.

“I am pleased and honored to be able to serve Clermont during this transitional time until a new council member can be seated,” Keith says. “It’s exciting to see projects we started a couple of years ago finally coming to completion.”

This appointment is effective immediately and Keith will serve until the winner of the Nov. 5 General Municipal Election takes office.

“Ray was a true Champion for Clermont,” City Manager Darren Gray says. “He was very passionate about our community and was heavily involved in many organizations. He will be missed.”

Ray Goodgame was 85 and had served 15 years on Seat 2 and lived in Kings Ridge for 17 years. Before he passed away July 28, he was nominated for the Florida League of Cities’ “E. Harris Drew Official Lifetime Achievement Award.”

Among his achievements, Goodgame served as the past chairman of the Lake-Sumter Metropolitan Planning Organization, past president of the Clermont Historical Society, a board member and liaison of the Cooper Memorial Library Association, a board member of the Community Foundation of South Lake, and a member of the South Lake Transportation Task Force, West Orange-South Lake Transportation and Economic Development Task Force, South Lake Chamber of Commerce, Clermont Kiwanis Club and Lions Club. He also served on the Tourism Development Council and on the Firefighters Pension Board of Trustees.

A big proponent of affordable housing for seniors, Goodgame worked closely with New Beginnings, as well as advocated for city involvement in a Feed Clermont program for hungry citizens.