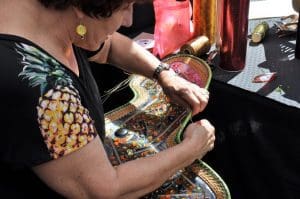 Mount Dora’s annual Craft Fair attracts massive crowds of thousands, and now the fair is generating national buzz being ranked No. 4 out of the top 200 fairs, according to Sunshine Artist magazine’s 27th annual list of the most profitable art and craft festivals.

The next Florida city to make the list was Tallahassee’s Market Days, which was ranked No. 11.

The annual Mount Dora Craft Fair was started 35 years ago by downtown merchants to attract visitors to town. Today the event is run by Visit Mount Dora, a nonprofit group dedicated to “bringing feet on the street” and branding the town through events and marketing.
“When I became the Craft Fair coordinator back in 2013, we identified that we needed to focus on quality exhibitors that would raise the festival’s reputation and attract more guests. The wide variety and beautiful work seen at the event gets better and better so people return to check out what’s new every year,” Janet Gamache, Visit Mount Dora’s event coordinator says in a press release.
Visit Mount Dora’s hard work is paying off.

The annual Craft Fair made Sunshine Artists magazine’s “Top 200 Best” list is compiled according to an annual festival exhibitor survey with reports of revenue earned at an event because “that’s the most objective indicator of a show’s success…. “  The list is published in Sunshine Artist’s annual September issue.

“Being one of Sunshine Artist magazine’s ‘200 Best’ signifies that the artists are happy with our marketing that brings buying crowds to the event. It also fulfills our purpose to bring feet on the streets not just during the festival but also results in return visits to town when people come to play, shop, dine and stay. It’s perfect synergy,” Janet says in the release.

The Mount Dora Craft Fair features juried local, regional, and national original works of art and crafts from over 400 artists just in time for the holiday gift giving season.

The next Craft Fair will be 9am to 5pm Oct. 26-27. Beer, wine tasting, a 40-foot cooling station, free kid zone and live music will be featured. There will be shuttles running to and from the event on both days. People may park at Mount Dora Plaza, 2700 Old U.S. Highway 441; Mount Dora High School, 701 N. Highland St.; Mount Dora Christian Academy, 301 West 13th Ave.
Parking will cost $10 per vehicle while the round-trip shuttle ride is free.

The fair is a free event. Service pets are allowed, and for more information, visit MountDoraCraftFair.com.