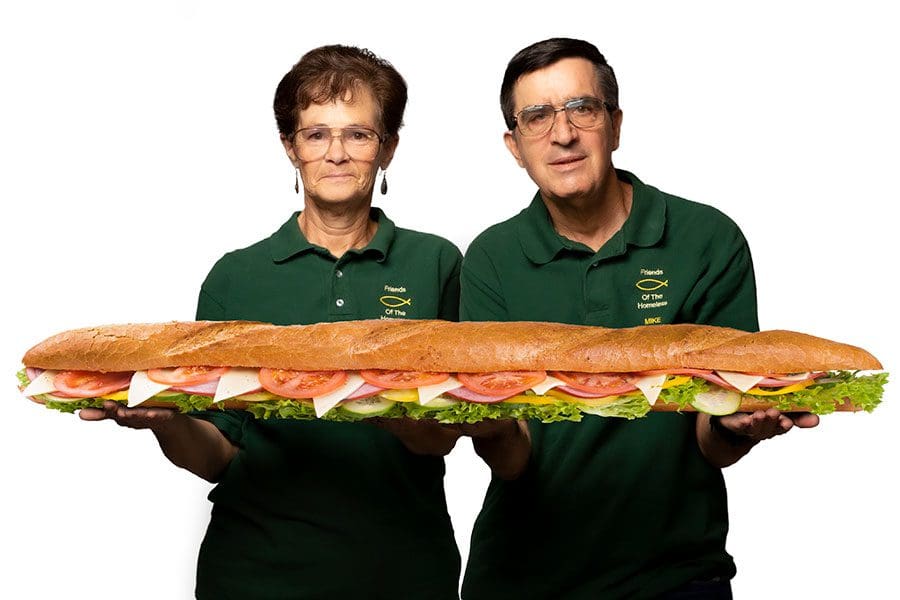 A Leesburg couple, expecting nothing in return, helps homeless by way of a sandwich ministry that has grown into much more.

When people think of retiring to Florida, they might envision sunny, fun-filled days at the beach, a golf course or poolside, but Mike and Linda Galat do not have time for that.

In fact, the couple, both now in their late 60s and despite Mike’s daily battle with Parkinson’s disease, have never been busier.

“We’d done missionary work in Mexico and in Massachusetts where we lived, but when we got here to Leesburg, we felt we weren’t serving the Lord enough, and together we were praying, ‘What do you want us to do, God?’” Linda says, adding: “We felt he was telling us to take care of the homeless.”

God’s answer was confirmed during a Sunday sermon shortly after that. Their pastor at Trinity Assembly of God in Fruitland Park, told a story about closing the church one night, when a woman asked to remain parked in their lot because it seemed like a safe place to sleep.

The pastor, dumbfounded, let her stay, but told the congregation how he wished he could open the church up to help the homeless in some way.

“Mike and I looked at each other and said, “That’s what it’s all about, that’s what the Lord is telling us to do.”

They let the pastor know they’d be willing to help, and three days later, were called on when the church was deemed a cold-weather shelter.

That was January 2018, and although the temperatures dipped to the 30s, only two people showed up. They were told it was because the homeless were leery about leaving their belongings unattended for fear they’d be stolen.

That’s when Mike and Linda were inspired to instead, go to them, hence the start of their “Friends of the Homeless” ministry.

Since then, the two, with help from the church, friends and even strangers, have prepared sack lunches – complete with two sandwiches, two water bottles, a fruit cup, fruit juice, a snack, and Christian reading material – they distribute religiously once or twice a week to homeless people living in camps or on city streets, parks, and benches. Occasionally, they prepare hot foods, and through the pandemic in 2020, never stopped.

They also collect socks, clothing, toiletries, blankets, and other necessities they sort and wash, then distribute from their car.

Mike and Linda say the hours they spend preparing for distribution days is equivalent to a full-time job, without pay, but their reward is knowing they are helping these people through life as best they can.

Linda says the homeless they’ve met are a mix of veterans, people suffering with mental illness, families with children, and educated and everyday people who have simply fallen on hard times, just trying to survive. Their commonality is that in addition to food and necessities, each one can benefit from a little care, hope and a friend or two.

“Since retiring here, I haven’t been in the pool yet, but we’re serving God and we love what we do. Sometimes we get to feeling like it’s our kids and we worry about them, especially if it’s raining or cold out,” Linda says, a sentiment seconded by Mike. “There are a lot of homeless, and I don’t think people realize how difficult their lives really are.”