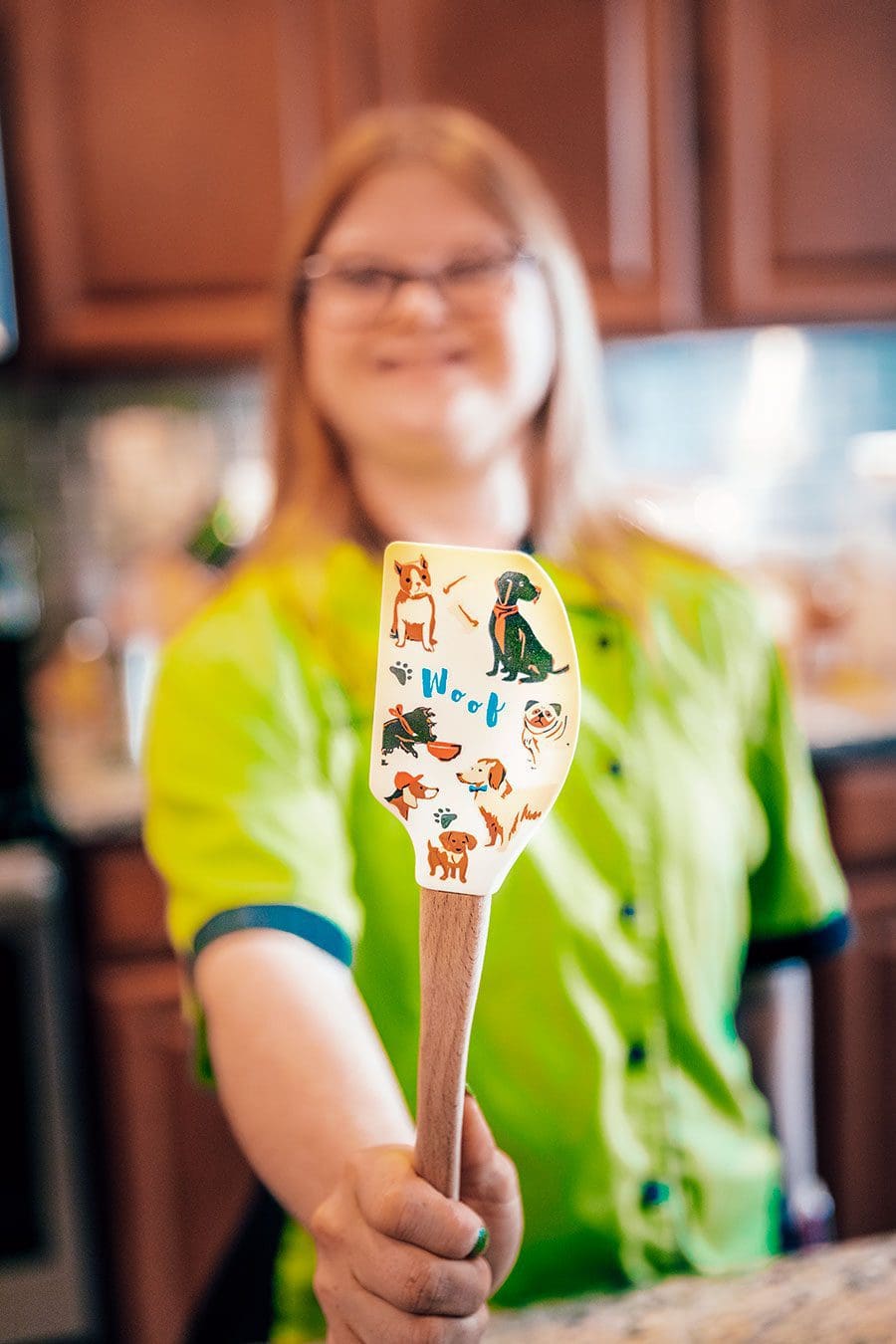 Clermont woman with Down Syndrome finds happiness and success in doggy treat business.

Those looking for the magical ingredients for success will find them in Allison Fogarty’s kitchen in Clermont.

“She shows me time and time again she is a fighter,” says Pat Fogarty, Allison’s mom.

Pat and her husband John are understandably proud of their daughter for overcoming so many hardships and achieving so much despite serious adversities.

In 1991, Allison was born with Down Syndrome and Tracheo-Esophageal Fistula (TEF), a condition that made swallowing impossible because her feeding tube was connected to her breathing tube, Pat says.

Allison had surgery to correct the problem when she was four days old, but her condition continued to affect her life. She was always coughing, suffered from aspiration pneumonia, and for 23 years, needed a tracheal tube in her neck to breathe. 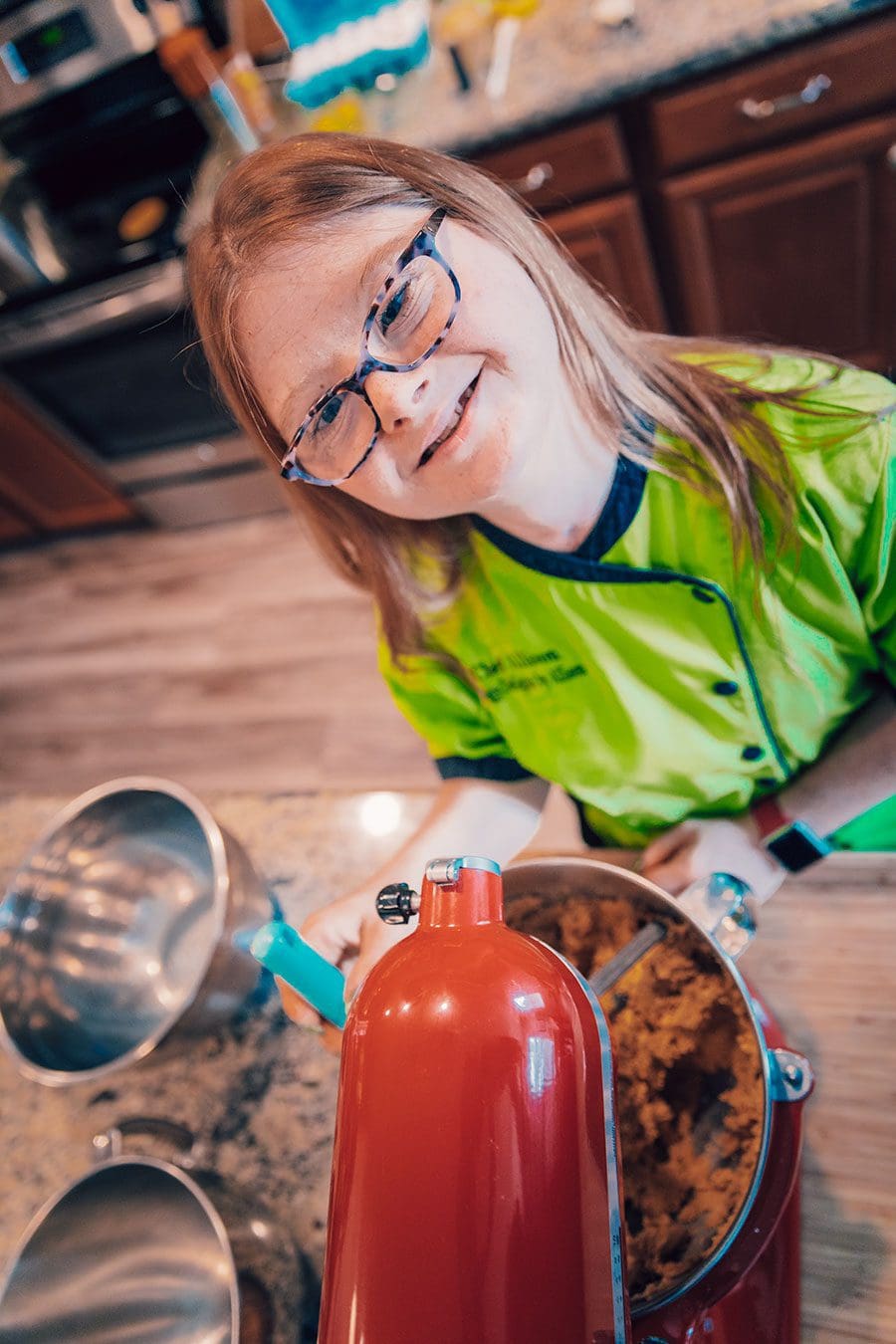 Allison spent years at various hospitals undergoing reconstructive surgeries. At one point, doctors discovered she had a cleft larynx, but she was not strong enough for surgery, so they put a feeding tube called a gastronomy tube (or g-tube) in her stomach to help her gain weight and strengthen her system. The downside of the procedure was that Allison could not eat or drink anything by mouth for two whole years.

During that bleak time, Allison discovered her dream job – cooking.

“She couldn’t eat so we thought we had to hide food from her; we didn’t even want to eat in front of her, but Allison told us, ‘It’s OK. You don’t have to hide, I’ll be fine,’” Pat says.

Pat and John began noticing that through every trial, Allison’s spirit was brighter when she watched cooking shows, especially the Rachael Ray Show, her favorite. Even though Allison couldn’t eat, watching others cook and eat actually inspired her.

Looking back, Allison says, “I knew I wanted to become a chef like her,” adding that Rachael Ray helped her more than she’ll ever know via her show.

“Rachael is my hero. She saved my life,” Allison says matter-of-factly.

After several surgeries, years later, doctors were able to remove Allison’s g-tube. When she was 23, Allison finally had her trach tube removed. Since then, she has been a lot healthier.

Allison does not like to think about those times. She explains, “It makes me feel so sad what happened in the past.” But today, she counters sad memories by focusing on her bright future.

In 2017, the Fogartys moved from Illinois to Florida.

They soon discovered the Down Syndrome Association of Central Florida and immediately joined the organization’s first Entrepreneur Academy for adults with the condition. 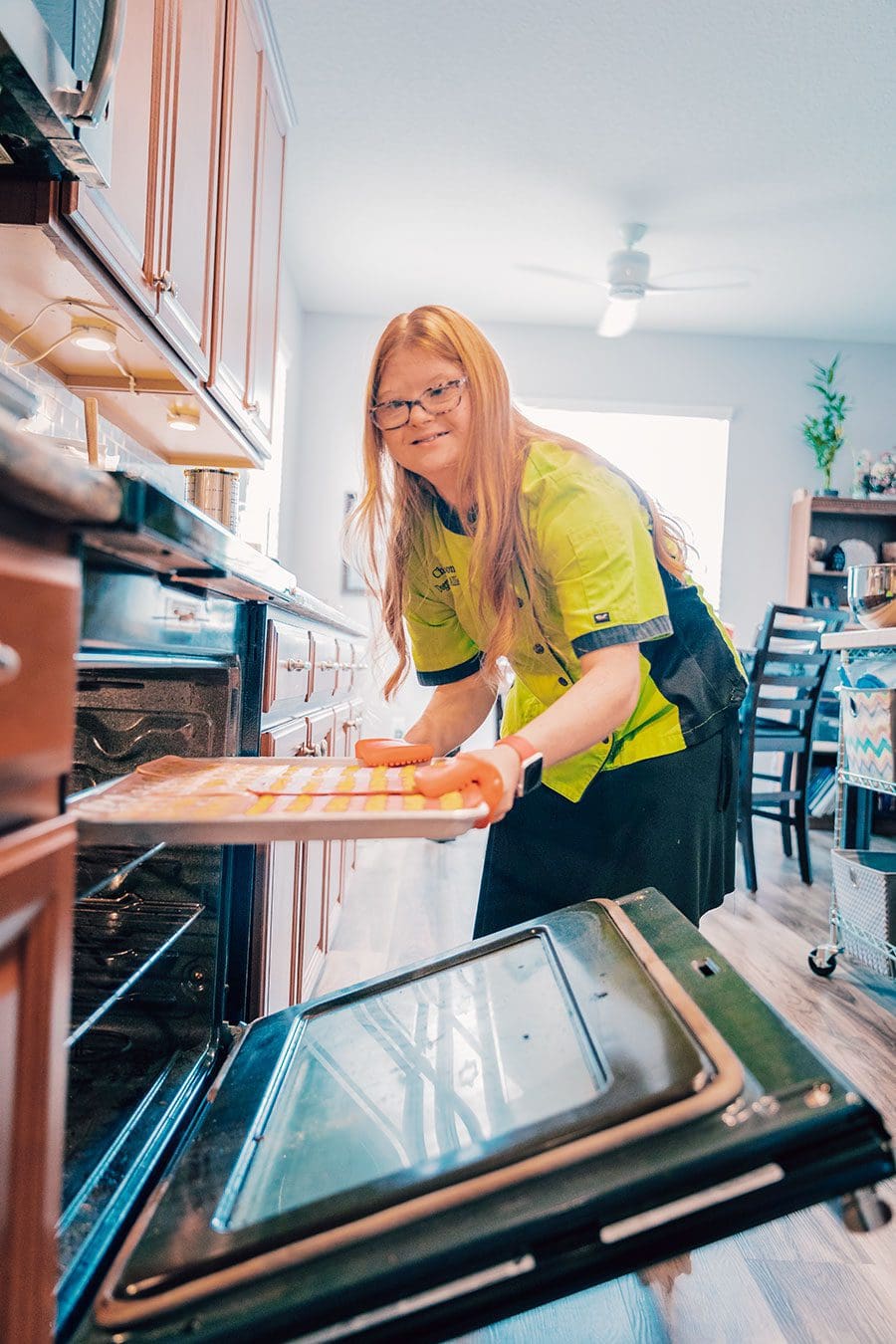 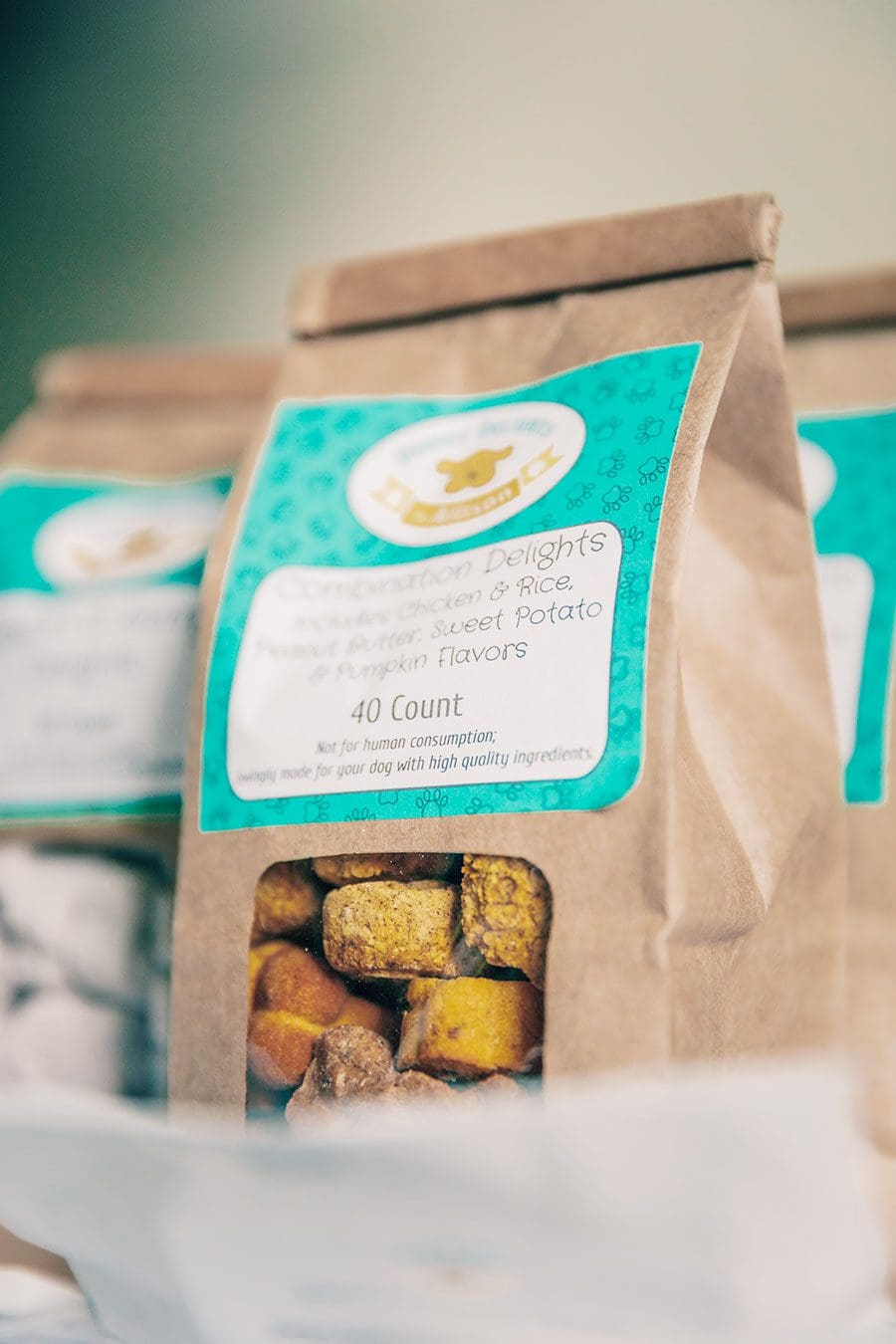 Allison, who already liked cooking for friends and family, says she noticed that there were a lot of dogs in her neighborhood, so she looked into baking doggy treats to give out when owners walked by with their fur babies on leashes in the afternoons.

After seeing how much most dogs seemed to love them, Allison decided to turn her newfound trade into her new business and Doggy Delights by Allison was born.

Pat says Allison began experimenting with different recipes and after numerous tweaks, had about six or seven combinations down pat.

Allison began selling her creations at the local farmer’s market in downtown Clermont and online – freeze-drying the treats to ensure freshness when shipping.

In between all that, Allison received a dream phone call from Rachael Ray after they’d sent an email in response to an announcement on the show calling for people interested in appearing on Rachael’s show.

In February 2020, Allison and Pat flew to New York to film a segment of the Rachael Ray Show, but its release was delayed when production ceased because of the coronavirus pandemic.

The episode finally aired on Aug. 21, 2020. The Fogartys, who had not yet seen it, were ecstatic. 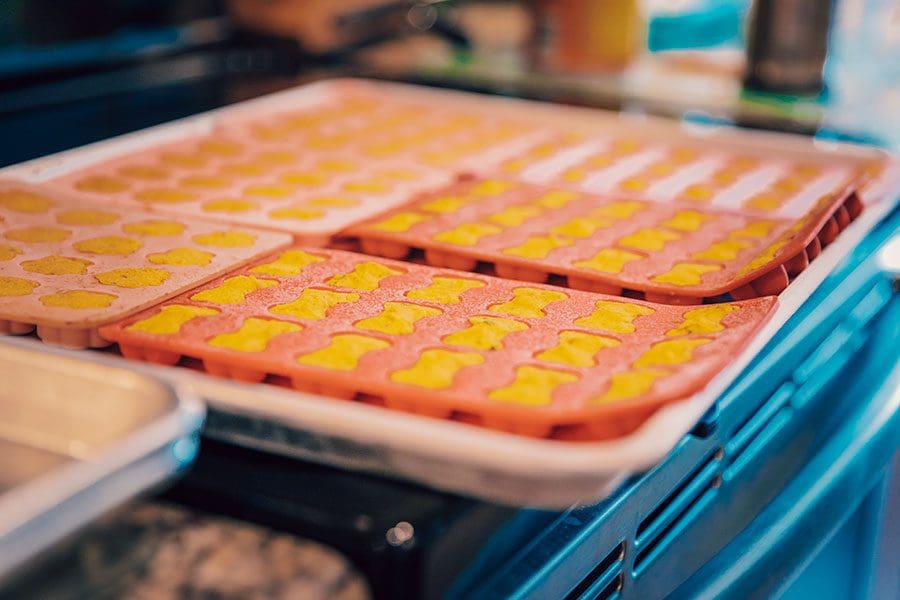 In the episode, which can be found on the Rachael Ray Show’s YouTube channel or website, a vibrant Chef Allison presented and baked her all-natural, grain free recipe for sweet potato dog treats.

Pat also appeared, and at one point, Rachael Ray even popped one of the dog treats into her mouth, deeming them “delicious” at least three times.

During the show, Rachael told Allison, “Chef Allison, I have to say, you’re my new hero,” before inviting her back to concoct a special pasta recipe for their moms to cook together.

“It was so fun meeting Rachael and she was so nice,” says Allison.

Pat and John, Allison’s Doggy Delights sidekicks and supportive parents of her every hope and dream, say what pleases them most is seeing Allison smiling and living life to the fullest pain free, for the most part.

“She wasn’t even supposed to live past the age of 11, so to see her happy and healthier than ever is so wonderful. She’s had a life of pain, such a hard life,” says Pat as she tears up. “I am just so proud of her.”

John says he’s no longer afraid for his daughter and longer fears that she can’t have a life like any other child. “It was all worth it to see her now.”

Pat’s advice to other parents of Downs Syndrome children is to “never give up.”

She said sometimes it takes talking to multiple doctors, asking questions and searching for answers even when things seem tough, bleak, or out of reach.

Pat suggests parents consider joining a support group to interact with others going through similar situations.

Allison likes to sing and dance in her spare time. She even participates in musical theater groups and shows. In fact, her favorite quote comes from Hairspray, a musical she appeared in: “’You have to think big to be big’ and that’s what I always do,” Allison says.

Words of wisdom from a woman who once had trouble finding a job because of her condition. 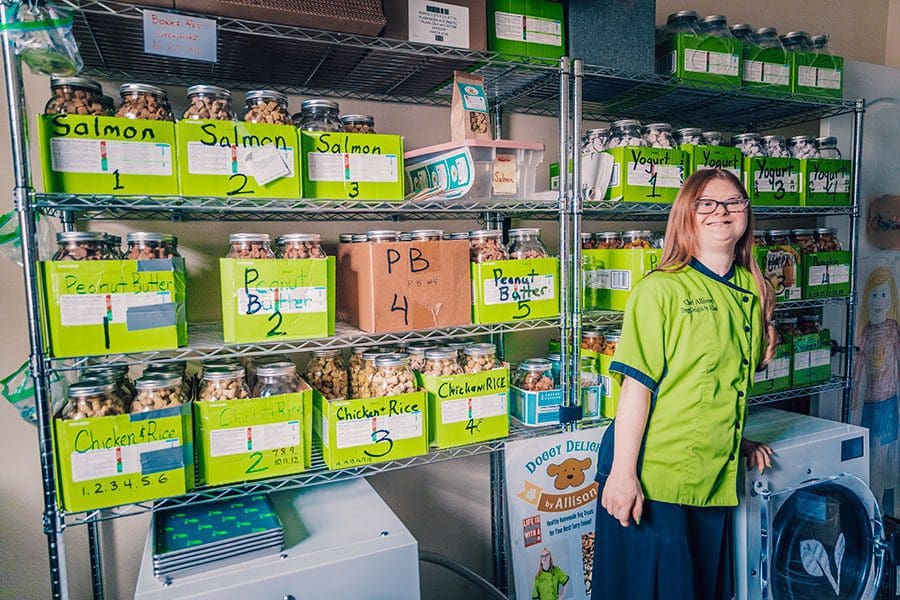 She loves baking and making her doggy treats and values special moments like when her boyfriend comes over to help her fill the molds with fresh mixture before baking. And she especially enjoys hearing about the treats from satisfied customers.

Most of all, Allison likes seeing dogs get all excited about getting a treat and cherishing every last crumb.

“Dogs really like my treats and it makes me feel good and happy,” she says.

Dogs even get a personalized letter signed by Allison with every purchase that reads, “Dear Doggy Friend, I am so happy that your human loves you so much and spoils you with treats! I hope you enjoy your delicious and healthy biscuits, homemade with LOVE by me – Allison.”