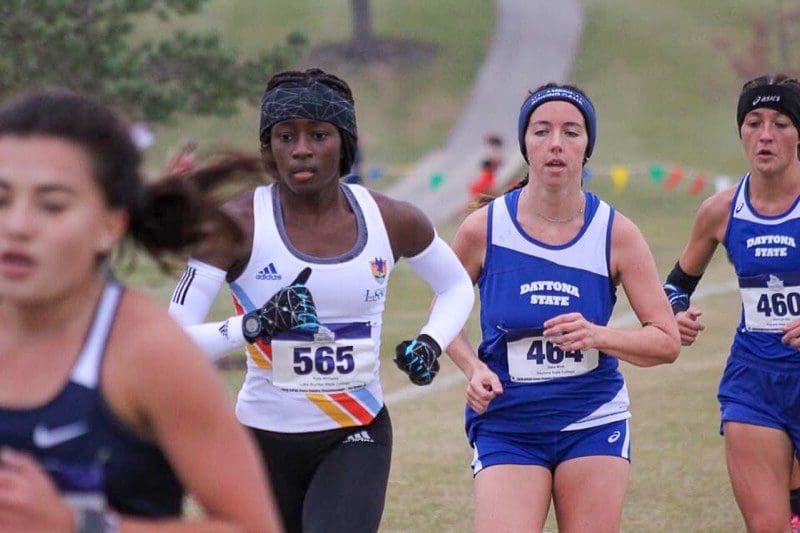 LSSC’s Kyja Williams (in white top) ran 20:09.55 to finish 17th at Nationals in the pool of over 115 runners. She was selected as an NJCAA Coaches Association All-America runner after the event. // Provided photo.

“These student-athletes have been phenomenal all season long,” LSSC Head Coach Cristy Snellgroves says in the release. “They have put both of our programs on the map in just two short years of existence. I am so proud of all of their accomplishments both on the course and in the classroom. I cannot thank them enough for such a great season under such difficult circumstances.”

After placing second in the Region 8 meet and earning All-State recognition, women’s runner Kyja Williams ran 20:09.55 to finish 17th at Nationals in the pool of over 115 runners. Williams was selected as an NJCAA Coaches Association All-America runner after the event.

Alexander Croy was the top finisher for the Lakehawks men’s team coming in 13th with a time of 26:36.91. His top 15 finish earned him NJCAA All-America status.

Nicholas Atkinson was next from LSSC to cross the line 36th among the 112 competitors. Adolfo Saucedo Flores along with William Troupe ran through the finish line back-to-back placing 39th and 40th respectively, followed by Ernesto Velasquez to complete the team.

With five runners competing and four finishing in the top 40, LSSC finished seventh at Nationals as a team.

“On behalf of LSSC, I want to congratulate each of these runners and Head Coach Snellgroves on their accomplishments this season,” adds LSSC President Dr. Stan Sidor in the release. He flew to Iowa to surprise the runners at the competition. “Each of these students has left a lasting legacy as Lakehawks, and I know that they have bright futures ahead of them.”