In today’s world, more and more women are having a blast with guns.

Donning cowboy boots, a riding skirt and a vest, Betty Woodburn looks like a character from the Old West. She’s equally proficient with firearms.

By her side are two single-action revolvers, a lever-action rifle and a shotgun—all replicas of models from the late 1800s. Suddenly, she begins shooting at imaginary bad-guy targets shaped like cactuses, cowboy heads and beer mugs.

Betty, a resident of Grand Island, is a star in cowboy action shooting, a sport where competitors dress the part of the Old West and shoot guns from that period in a contest based on speed and accuracy. Don’t mess with this 68-year-old cowgirl. She often outshoots her male counterparts.

“Competing in cowboy action shooting is the most fun you can have with your clothes on,” she says.

Once upon a time, the typical image of an American gun owner was a macho male who clinked his boot spurs and twirled his six-shooter. Today, there’s a new group of gunslingers in the world.

Gun ownership among women has increased by 77 percent since 2005, according to the National Shooting Sports Foundation. The Well Armed Woman, a membership and training organization, estimates there are 20 million female gun owners today in the United States. Women own guns for self-defense, hunting and shooting sports—the same reasons men cite.

As women’s shooting clubs and organizations pop up around the country, gun stores and manufacturers of gun accessories are catering to them. Women can purchase everything from concealed-carry purses and pink holsters to hunting vests and shooting-themed shirts. In 2017, the National Rifle Association put together its first concealed-carry fashion show for women. At Shooters World in The Villages, Mondays are designated as Ladies Day, offering free range time and gun rentals to women.

“We definitely see more women coming in these days to purchase guns and also use our gun range than we did 10 or 20 years ago,” says Gordon Schorer Jr., whose father owns the Gun Shop and Gun Range in Leesburg. “They’re very smart about purchasing a gun. Instead of picking out one that looks cool, they shoot our rental guns to see what feels comfortable in their hands.”

Contrary to popular belief, most of them are not cowgirls or country girls who come from a family of gun enthusiasts. At Ares Firearms Training Facility in Leesburg, Trae Johnson and his wife, Julie, both NRA-certified instructors, teach a variety of professional businesswomen to shoot with stellar aim and stern confidence.

“The women who come here are highly educated and successful,” Julie says. “They’re teachers, medical professionals, business owners and lawyers who you would never guess have a concealed weapon permit.”

Here’s the kicker: Women often are better shots than their male counterparts. Women start out with an open mind and a desire to learn, Julie notes. Conversely, men tend to not follow instructions as much because they think they already know everything about firearms.

“We’ll have husbands and wives who have never shot guns come to our facility, and the wives pick up on the basics of shooting faster,” Julie says. “They listen carefully and follow instructions and don’t try to muscle the gun like men so often do.” 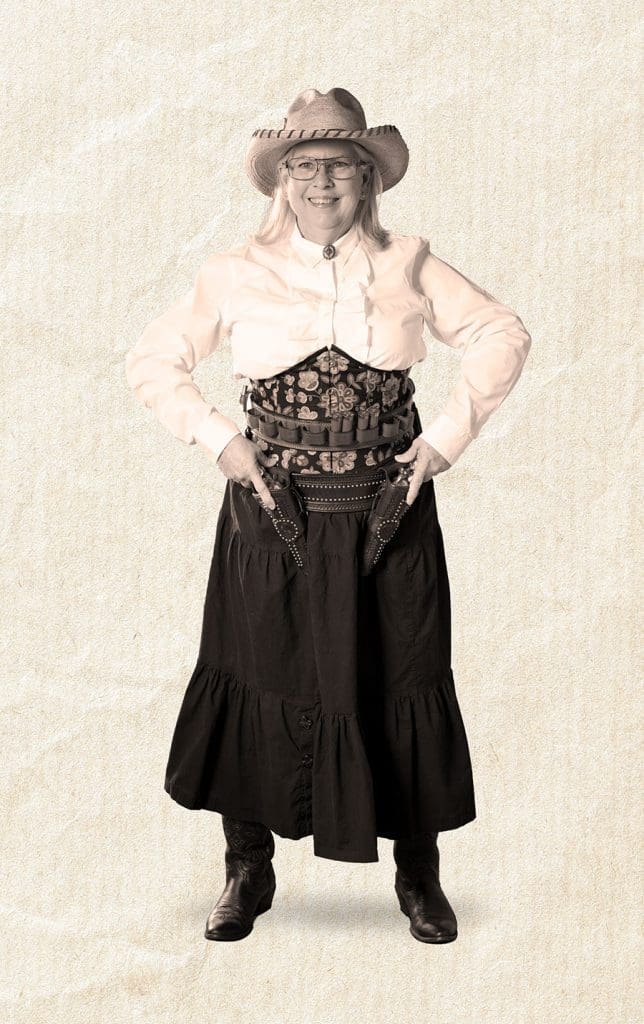 It wasn’t your typical first date, but for Betty, the cowboy action shooter, it was more enjoyable than going to dinner or a movie. Fifty-three years ago, she and her husband, Woody, went to a gun range for a few hours of plinking.

“We had lots of fun,” she recalls.

A gun enthusiast, Betty started competing in cowboy action shooting 20 years ago, and some of her matches were held at the Eustis Gun Club. The couple liked the area and moved in 2005 from Miami to Grand Island.

In cowboy action shooting, a number of stations are set up with different Old West-themed targets. The tricky part for competitors is hitting the targets in a specific order. Shooting one out of order earns a 10-second procedural penalty, and every miss is a five-second penalty. Since every shooter must create an alter-ego, Betty goes by the name “Sassy Teton Lady.”

“I love the Teton mountain range; it’s my favorite area in the country and I’d live there if I could,” she says. “I added ‘Sassy’ because I’m a sassy type of person.”

Betty is quite the marksman, becoming Florida’s overall female state champion in 2004. At the 2011 World Championships held in New Mexico, she finished second in the duelist category, where competitors shoot with one hand unsupported.

“Unlike most retirees, I don’t play golf,” says Betty, a member of the NRA. “I shoot guns.”

She encourages more women to do the same.

“Try it and you’ll like it,” she says. “If you haven’t shot guns, then don’t make any negative comments about firearms. They’re not evil.” 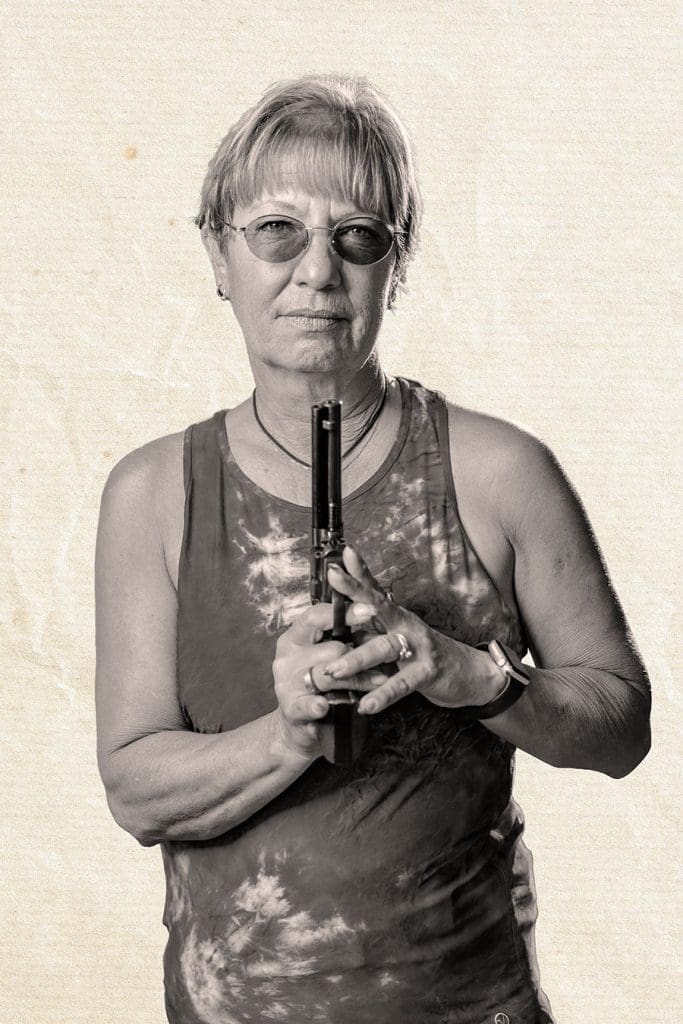 Susan Summerlin remembers the night that two loud and seemingly drunken men sneaked onto her 10-acre property at 1am to harass her horses. Frightened, the widowed Eustis resident grabbed her Taurus 9-millimeter handgun and gave the trespassers an ultimatum.

“I told them that they could either leave or be shot.”

Moments like those are why Susan got a concealed weapon permit after her husband died in 2018. Fortunately for her, she hasn’t had to draw her handgun on anyone since that incident.

“Carrying a gun gives me control over my life,” she says. “Knowing I can defend myself gives me a sense of peace.”

Her primary carry weapon is a .32-caliber Derringer that she purchased 34 years ago. The tiny pistol holds only two rounds and fits snugly in her back pocket, eliminating the need for a gun belt, holster or carry purse.

Susan sometimes shoots recreationally, once firing an AR-15 and “falling in love with it.” For her, though, owning a gun is mostly about self-protection. She has nightstands on each side of her bed. Before going to sleep, she places her 9-millimeter handgun on one and her Derringer on the other.

“It makes me feel safer at night, especially in this day and age,” she says. 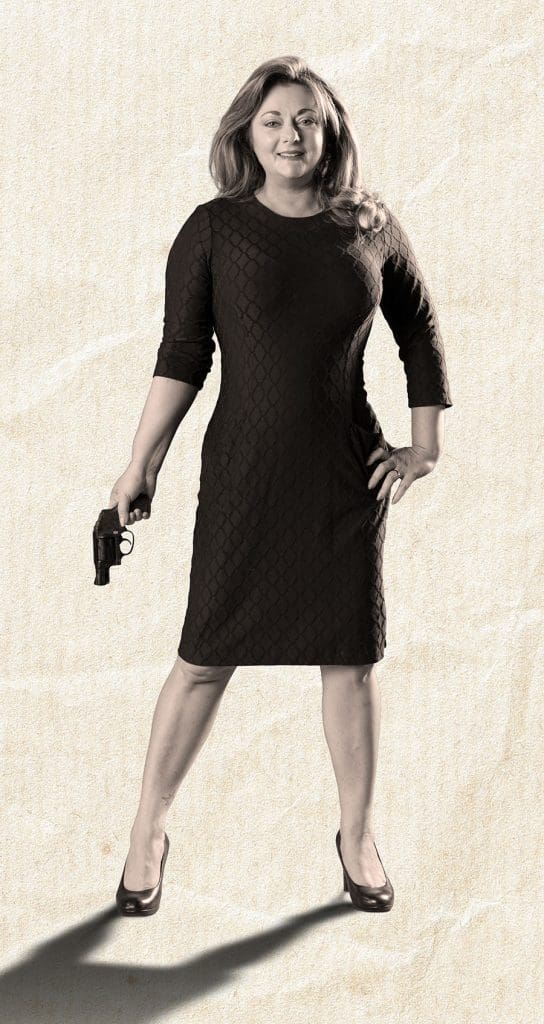 Safety is the primary reason that Lory Baxley, the head of business development at Lake Centre Home Care, became a gun owner. She completed a concealed weapon class in 2013 with a group of 12 female friends.

“If you’re a small woman who gets attacked by a man who is 6 feet 3 inches tall, how are you going to stop him from overpowering you? I am small in stature, so for me, firearms are a great equalizer,” she says.

Lory, who lives in Eustis, feels comfortable carrying a gun. She was brought up around firearms and has fond memories of her father taking her to a now-defunct gun range off David Walker Road in Eustis when she was 8.

Her carry revolver has a red laser sight. She said that is advantageous because the laser indicates where her gun’s muzzle is pointing, allowing her to keep both eyes open without having to line up the front and rear sights. Occasional trips to the Eustis Gun Club keep her shooting skills sharp.

“I have a responsibility to protect myself and my family,” she says. “I think having a gun is my responsibility as a citizen because if you protect yourself and others, you can stop tragedies from happening.” 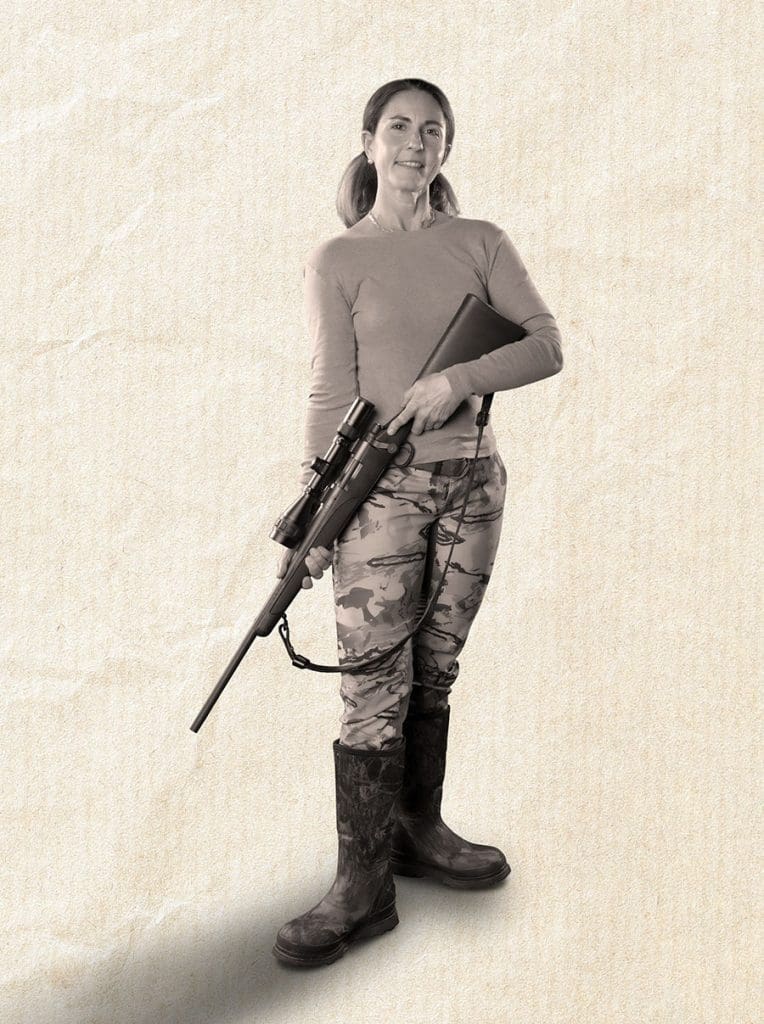 In 2010, Mary Pat Godigkeit, of Oxford, struggled to watch her mother battle lung cancer. To help her cope with sadness, Mary Pat’s uncle popped the unlikeliest of questions.

“He asked me if I wanted to go hunting,” says Mary Pat, a speech pathologist at UF Health Leesburg Hospital. “It seemed kind of weird because I had never really been into firearms prior to that.”

She hesitantly agreed. Her uncle bought her a used Remington 243 bolt-action hunting rifle, and off they went for a day of deer hunting. When they returned, her uncle showed her how to properly clean the gun.

“I quickly became hooked by both hunting and shooting,” she says. “The first time I shot a gun was not intimidating. I liked the feel of the rifle and the power behind it.”

She became quite the hunter. On Thanksgiving Day in both 2013 and 2014, she shot and killed a 7-point buck.

“To do that in back-to-back years was very exciting because, to be honest, most of my life I would’ve never considered shooting an animal,” she says.

Mary Pat feels confident that most women can handle the recoil from a high-powered rifle.

“When it’s your first time shooting, go out with somebody who is knowledgeable about guns so you don’t injure yourself,” she says. “But don’t be afraid. Like anything else, you have to keep practicing.”

Unlike Mary Pat, Grand Island resident Kristine Howard began deer hunting as a small girl growing up in Wisconsin. Her father, a single parent raising three kids, wanted to share his hobby with them. Kristine completed a hunter safety course and, as a high school sophomore, killed her first deer with a .12-gauge shotgun.

Today, Kristine and her boyfriend travel to Alabama twice a year for deer and squirrel hunting and have been hog hunting in Texas. She got her boyfriend interested in the sport when they began dating seven years ago.

“If couples hunt together, then they stay together,” says Kristine, chief marketing officer at Mosquito Squad in Grand Island. “Some women like to go to the spa, but when I’m out hunting in camouflage, it’s relaxing.”

In addition to hunting, Kristine has actively involved her three children—Jayden, 17, Olivia, 15, and Ashley, 13—in target and clay shooting. Introducing them to guns, she says, teaches them how to use guns responsibly. She feels that when firearms are forbidden, children will satisfy their natural curiosity without proper supervision.

“I have female friends who are afraid of guns, and I tell them they have to truly have a reason not to like guns,” she says. “Once you shoot it, you realize it’s not so intimidating.”

Not all women have pulled the trigger on buying a gun.

One of them is Betsy Barbieux, owner of Image Inside and Out in Leesburg. She got her concealed weapon permit in 2018 and has been a member of the NRA for a decade. However, a shoulder injury and a demanding work schedule has delayed her in buying a gun.

“I’ve only fired a gun here and there throughout my lifetime,” she says. “I’ve never been hunting, either.”

Still, acquiring a firearm is high on her to-do list.

“It’s like buying a car; I want someone to go shopping with me and point me in the right direction,” she says.

When that day comes, Betsy won’t use it for self-defense or hunting. For her, owning a firearm is about exercising a constitutional right.

“One of the things that makes the U.S. unique is that we have the ability to keep and bear arms,” she says.

Today, many women are doing just that.

The three-most popular firearms purchased by women are: