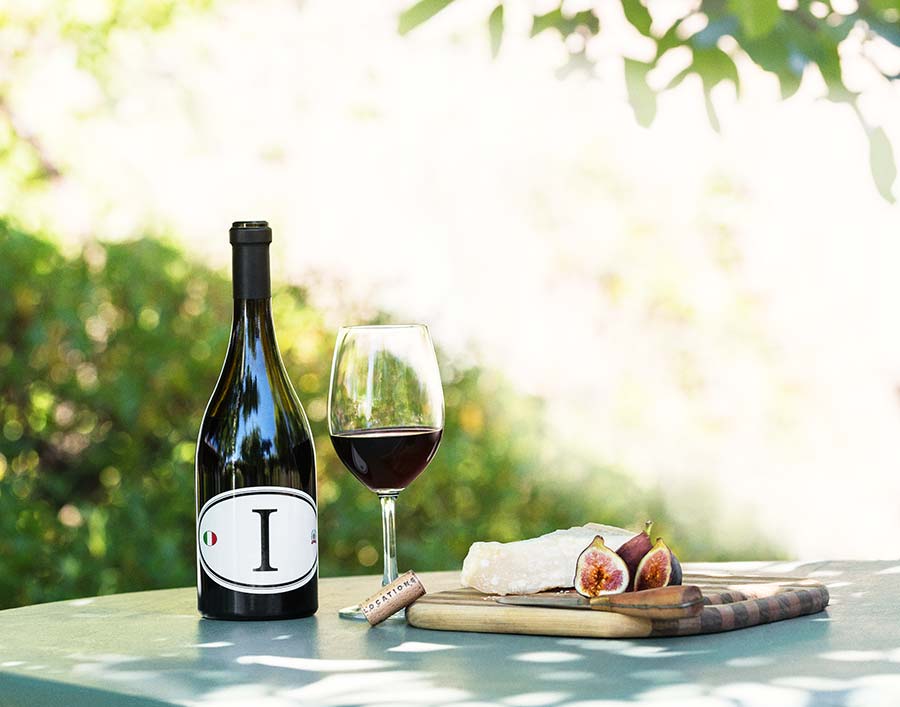 Who says you have to travel to a winery to meet a winemaker and taste his wines? Dave Phinney led an interactive online tasting, proving location is relative.

Everyone knows when buying real estate that location is an important consideration. Where a wine is produced also is an important sales tool, especially when wines come from distinctive and highly prized geographical areas where the terroir is considered magical. Certain places—Italy, France, Spain, and California—tout specific regions as the best. Think Tuscany, Bordeaux, Rioja, and Napa, but single vineyard wines from those areas are often very expensive.

Enter Dave Phinney, a young winemaker who thinks outside the box—whether it’s making and blending wines or figuring out the best way to market them. He also likes to keep things simple and fun, including wine labels. You can’t miss the large, single letters on the oval white labels on his Locations Wines when perusing wine shops in Lake and Sumter counties.

“I created Locations based on a simple concept: make the best possible wine from a given country or location,” he told participants in his online tasting. “The simple concept ended up being pretty challenging to put into action.”

Indeed, European AOC (appellation d’origine controlee) placed restraints on blending grapes, which is of the utmost importance to Dave. He wanted to seek out high-quality vineyards with low yields and then combine those grapes with grapes from other lesser known areas. His vision was to craft a wine that paid homage to the country of origin, not just a particular region or vintage. Traditions are hard to break, and it took several years to find forward-thinking growers who would share his vision.

Nonetheless, Dave accomplished his goal in France, where he had bought a vineyard in the Maury appellation in 2008.

“I couldn’t believe what I saw when I arrived at this special vineyard…schist and granite soils like nothing I had ever seen in California,” he says. “I fell in love with this land and the promises it held.”

After making several single vineyard wines from his estate, he began to venture north to Bordeaux and Rhone. He started wondering what the wines would be like if he could blend old vine Grenache from the Rhone Valley with old vine Grenache from his vineyard. As his reputation and venture grew in Maury, other winemakers joined it. Today, his “F” wines from France contain a blend of Grenache from the Roussillon, Syrah from the Rhone Valley, and assorted Bordeaux varieties. And wine critic Robert Parker takes them seriously enough to give them a 91 rating.

“It’s important not to be seen as a gimmick,” Dave says. “The wines must be good so they are not perceived as supermarket wines. We want consumers to feel like they are getting more than they paid for.”

Today, Locations Wines produces 12 different wines representing France (a red and a rosé), Italy, Spain (E for España), Portugal, Corsica, Argentina, Texas, Oregon, Washington state, and two from California (red and white). The California wines showcase the best of the Golden State with fruit from Napa, Sonoma, Mendocino, and the Sierra Foothills. All sell in the $20 range and all are bottled in the country or state as the labels indicate.

And where did the idea originate for those distinctive letter labels?

Dave was at the Charles de Gaulle Airport in Paris when he noticed the unique “F” sticker on the license plate of a taxi as it pulled up to the curb. He had a revelation: he would borrow the taxi idea and use letters to create a wine label indicating a specific country.

“My mind exploded with the thought and possibility,” he says. “What if I could take this idea and do it not only in France, but also Italy, Spain, and Portugal. I wanted to produce wines that paid homage to their homelands without compromise and without boundaries.

“And let’s face it. These stickers are something everyone can recognize without having to remember a label or name.”

Plan your own virtual tasting

Are you curious what your out-of-town friends like to drink these days? It’s easy to discuss wines over the internet. The added bonus is you don’t have to leave home.

1.  Agree on three or four wines you’d like to try.

2.  Find the wines in your locale. Make sure you buy the same varietals and vintage as everyone else.

3.  Research the wines, and print profile sheets from the winery’s website, if possible.

4.  Schedule a convenient time for everyone to use a program like Skype or GoToMeeting.com.

5.  Open your bottles and start your virtual tasting.

6.  Swirl, sniff, and sip just like you would in a real-world setting.

7.  Make sure every participant has a chance to share their opinions on each wine.