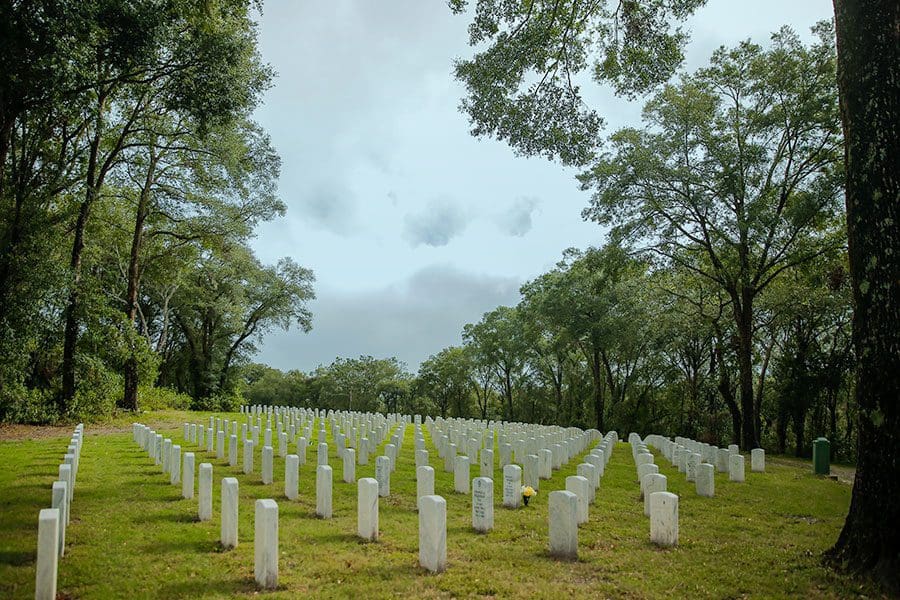 Historical cemeteries are the final resting places for heroes and characters.

Every year on Jan. 27, hundreds of Green Berets storm Florida National Cemetery in Bushnell. They gather to remember the life of Green Beret Franklin Douglas Miller on his birthday.

Doug, as he was known, received the Medal of Honor during the Vietnam War and served as a sergeant in the U.S. Army Special Forces in Asia for six years. Throughout his career in the Army, he also was awarded a Silver Star, two Bronze Stars and six Purple Hearts. He is memorialized in a section of the cemetery.

“There are Special Forces Association (members) out here on his birthday. Hundreds of Green Berets come here and they all drink whiskey and celebrate. I mean, he was like a badass,” says Gerard Lyons, assistant director of Florida National Cemetery.

The stories of many legendary people live on at historical cemeteries such as Florida National and Lone Oak in Leesburg.

Florida National has two other Medal of Honor recipients buried there, including Master Sgt. James R. Hendrix, who served in the Army during World War II, and William R. Charette, who served as a master chief hospital corpsman in the Navy in Korea and Vietnam. He also received a Purple Heart for his heroic acts.

The lineage of war heroes extends much farther back than the 20th century. Maj. David Moniac, a Creek Indian, fought in the Second Seminole War in the 1830s as a member of the Creek mounted volunteers. He was killed at the Battle of Wahoo Swamp. He was the first Native American graduate of the U.S. Military Academy in 1822 and also served as a second lieutenant in the U.S. 6th Infantry. His headstone reads, “He was as brave and gallant a man as ever drew a sword or faced an enemy.”

Other than veterans, the spouses and children of soldiers also can be buried alongside their family members at Florida National.

“And with the Cory Shea Act, if a single soldier is killed in action, their parents can be interred with them, too,” Gerard says.

Florida National Cemetery is the second busiest in the country with around 7,000 new burials every year, Gerard says. It also is one of the largest in the state at 600 acres. The cemetery includes a Memorial Pathway lined with more than 50 memorials, most of which commemorate veterans of 20th-century conflicts, according to its website.

Florida National Cemetery is located in the Withlacoochee Forest, the second-largest forest in the state. In 1980, the Department of Veteran Affairs announced that a new national cemetery would be established in Withlacoochee, and the first burial took place in 1988.

In 1993, the American Veterans (AMVETS) gifted a carillon that is adjacent to the main building. The main assembly area, adorned with an open colonnade, hosts events for Memorial Day and Veterans Day.

Lone Oak Cemetery was founded in 1887 and earned its name because there was only one oak tree on the premises, along with a small cabin and graveyard. The land was donated because there was no cemetery in the area up to that time. But long before its official founding, Lone Oak recorded its first burial, that of Minerva Howell, in 1867.

“At that time, they put a fence around her grave to keep the critters away from it because it was so wooded and just primitive,” says Midge Dodge, executive director of Lone Oak.

The Lone Oak Improvement Association was started in 1893, and the first fundraiser generated money for a wrought-iron fence around the property.

The cemetery covers about 37 acres, with roughly 6,000 people buried there and around 100 new burials each year, Midge says. 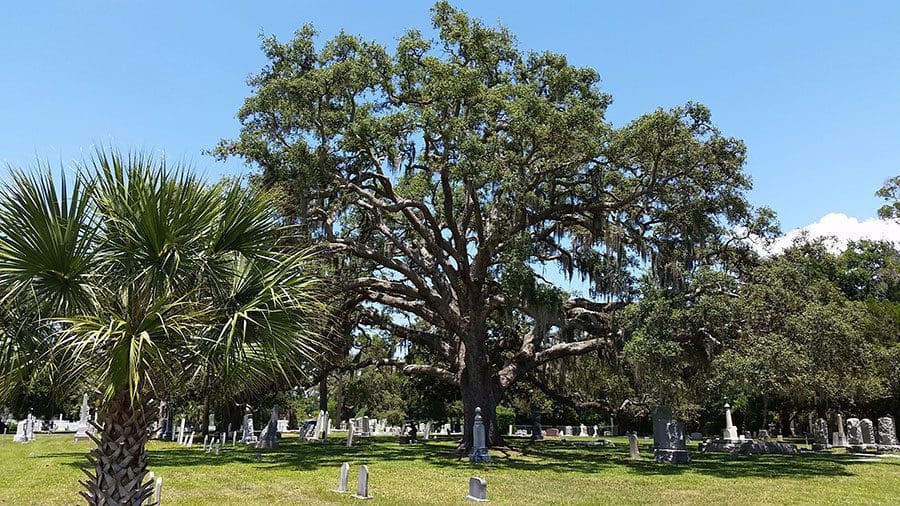 Lone Oak Cemetery has been a part of local history since 1887, and is the final resting place for Leesburg founder Evander Lee, Police Chief James Hux, and George Widdas, gunsmith for Annie Oakley and Buffalo Bill Cody.

One legend in Lone Oak is Evander Lee, for whom Leesburg is named. He was buried there in 1904. Evander and his brother owned a store, and when purchasing supplies from New York, they were asked where the goods would be shipped by waterway. The brothers decided on the name “Leesburg,” or so the story goes, Midge says.

Other founding families also are buried at Lone Oak, as well as Police Chief James Lee Hux, who was assassinated in 1924 while chasing moonshiners, Midge says.

Another recognizable name is Annie Oakley. She’s not buried at Lone Oak, but George Widdas is—he was the gunsmith for the famed sharpshooter as well as “Buffalo Bill” Cody. Annie, an occasional resident of Leesburg, refused to be buried at Lone Oak because the cemetery did not allow animals to be buried there, and she wanted her dog with her at the same site.

“We now have a pet cemetery here. And so, we were going to name it Dave’s Garden after Annie Oakley’s dog, but the consensus came down to Pet Haven Memorial Gardens,” Midge says.

Although Lone Oak isn’t owned by the city of Leesburg, it is considered a historic part of the city, so officials approve a grant each year to help with maintenance. Lone Oak also handles maintenance and upkeep, though not burials, at Shady Oak Cemetery in Leesburg.

Lone Oak is a nonprofit organization, so other fundraising events for upkeep include its annual “Chair”-i-“Table” event, where donated chairs and tables are on display at the Leesburg Art Fest and then winners are drawn in a raffle.

On Memorial Day and Veterans Day, the cemetery puts up hundreds of flags to commemorate the lives lost in the wars. Lone Oak also participates in Wreaths Across America, a national program held the second week of December every year. A member of each of the armed forces places a wreath in front of the Veterans Memorial, and speakers at the event have included U.S. Rep. Daniel Webster.

“(We) honor the veterans of all the wars and we lay wreaths. People purchase wreaths for their loved ones or some people just purchase them for veterans in general, because we have a lot of them that no longer have any family alive,” Midge says.