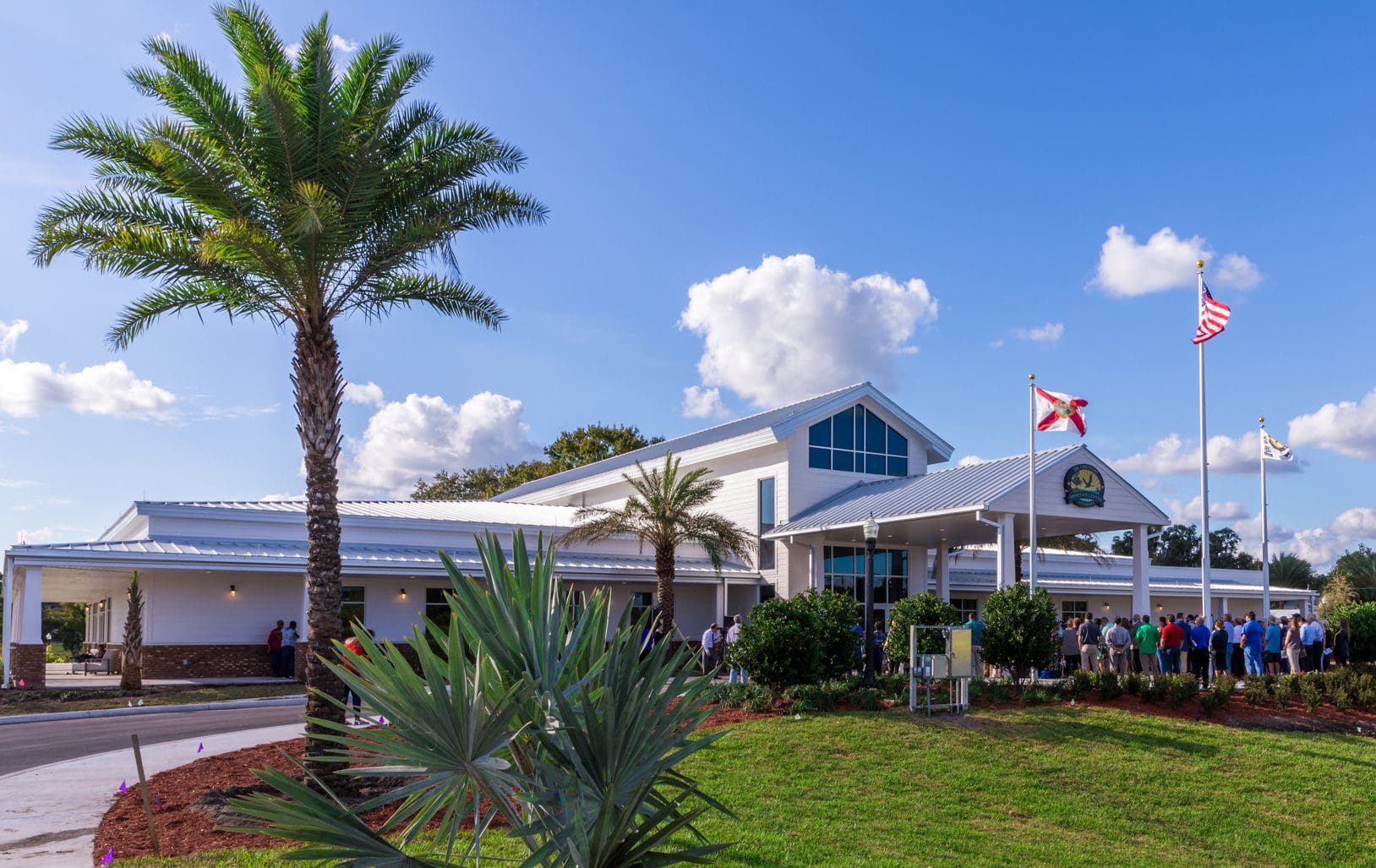 The Venetian Center in Leesburg debuted Tuesday with a ribbon-cutting ceremony and open house. // Photos by Douglas Tyler

When James Ghent was growing up in the 1950s in Leesburg, the city’s Venetian Gardens park was not open to the African-American community.

After many years of living in Miami, James and his wife, Mary, returned to Leesburg in 2018 for their retirement. Tuesday, they attended the opening of a multicultural, multipurpose community center that James calls a testament to change and part of the revitalization of Leesburg.

“When you have a multicultural center, that’s always good for the surrounding neighborhoods and for the commerce of the city as well,” James says.

City Manager Al Minner, who emphasizes that the project was completed on time, on budget and debt-free, says the Venetian Center “enhances Leesburg as one of Florida’s great communities.”

The community center, south of Dixie Avenue on the shores of Lake Harris, is the cornerstone of the city’s three-phase master plan designed to make the Lakefront a destination for public and private events, entertainment and recreation. In remarks during a ribbon-cutting ceremony, City Commissioner Jay Hurley told an eager audience that Venetian Center promises a “Wow!” factor to visitors. The center does not disappoint.

The Harris Room, the largest of the venue’s three rooms, faces west and provides a panoramic view of Venetian Cove and Venetian Gardens. A sky-high, steeple-like ceiling has skylight-type windows to let sunshine in during the day or moonlight at night when the room is used as a grand ballroom. Outside the Harris Room, a new walking bridge leads from the patio to Martin Luther King Island, and a 1,760-square-foot covered patio wraps around to the southern side of the building, with a view of Lake Harris in the distance.

Two smaller meeting rooms, Griffin and Canal, can hold separate functions or be opened up in combination as the Chain of Lakes Room. Venetian Center’s other amenities include a full catering kitchen and bar, and state-of-the-art A/V equipment.

The city has steadily improved the 65-acre park with projects such as a splash pad and Rogers Park Pavilion in 2017, and the renovated Kids Korner playground, which opened in 2016.

Renovations to Ski Beach in 2018 included two new boat ramps, a walking trail, volleyball lights and more. In the works is the 6,500-square-foot restaurant, designed by the same developer of Eaton’s Beach Sandbar & Grill in Weirsdale. A lakeside boardwalk with floating docks also is part of the city’s plans.

James and Mary say they look forward to attending events and enjoying activities at the center. They also attended the ceremony in support of their Christian Worship Center pastor, John Christian, who just happens to be Leesburg’s mayor and Tuesday’s ribbon cutter.

“This is your building,” John says. “One of the biggest things that we talked about was making sure that the residents could afford to utilize the facility … from the smallest church to the largest nonprofit to the richest business, this is your building.” 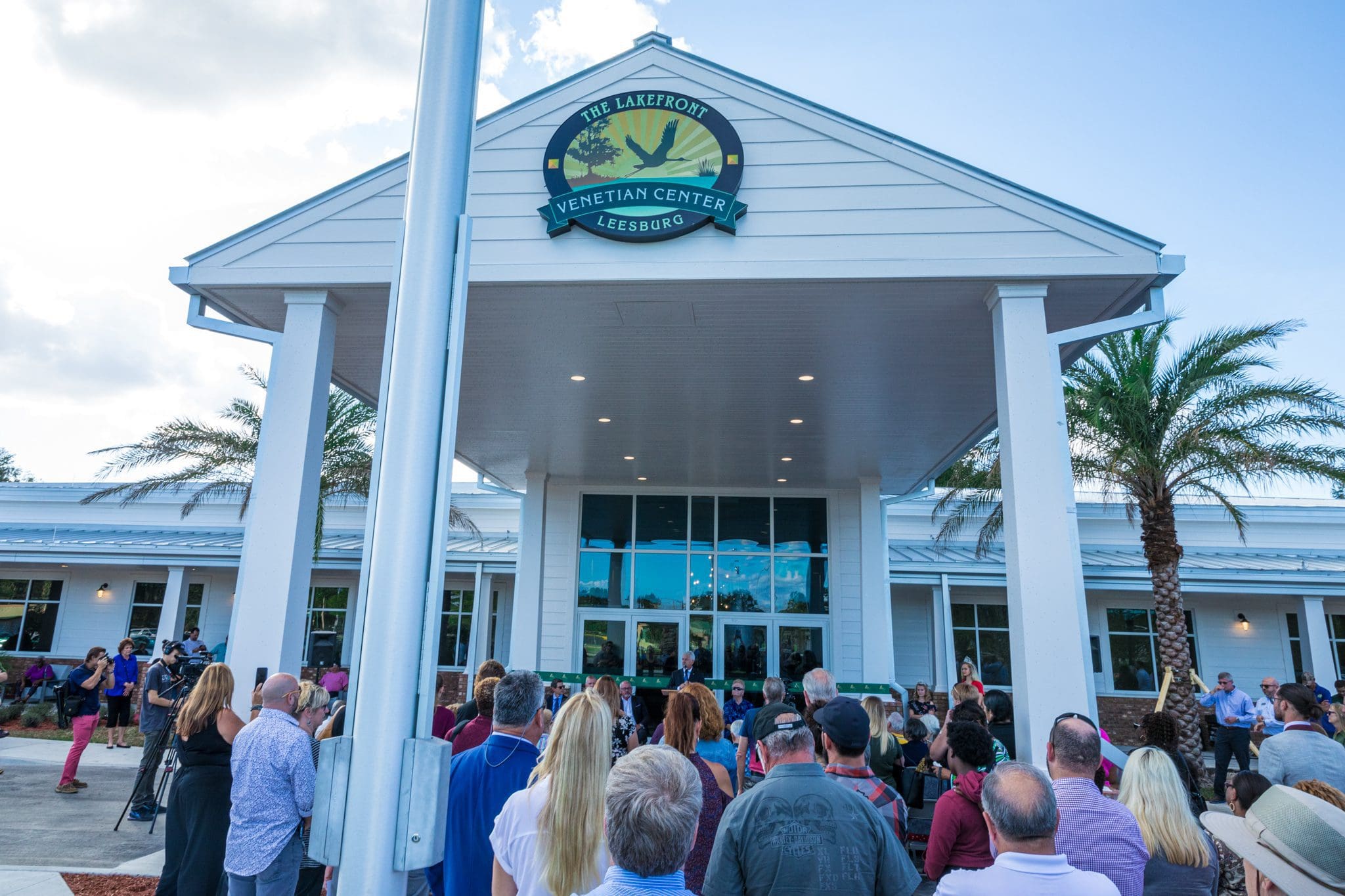 A crowd listens to remarks during Tuesday’s ribbon-cutting ceremony for the Venetian Center in Leesburg.