Laughter helps. Laughter heals. So, the “Funniest Night in America” should go a long way toward healing veterans and first responders.

Comedians from the Laughs for the Troops nonprofit organization are scheduled to perform at 8pm Sept. 20 at the Clermont Performing Arts Center, 3700 U.S. Highway 27. Tickets cost $40 for the general public and can be purchased by calling the box office at 352.394.4800 from 1-6pm Monday-Friday or visiting clermontpac.com, according to a news release.

The Funniest Night in America show features Thomas Brown, a comedy veteran of more than 25 years and founder of Laughs for the Troops (LFTT); Happy Cole, a Florida native and one of Carnival Cruise’s top-rated comedians; Tommy Drake, also a regular Carnival performer; and Clermont’s own Ron Feingold, who will also host the two-hour show.

LFTT is dedicated to creating events that bring people together in laughter to build awareness and support for veterans and first responders who are struggling with post-traumatic stress disorder (PTSD) or traumatic brain injury (TBI).

LFTT, its partner Orlando iHeartMedia, and other supporters will provide hundreds of veterans, first responders, and their families with free tickets to enjoy a fun-filled show.

“Research tells us that laughter is truly the best medicine for those suffering from PTSD, and this is just one of the ways we can do our part to help,” Thomas says in the release. “We have enjoyed the opportunity to entertain veterans and first responders in Tampa, Orlando, Jacksonville, Los Angeles, and the Atlanta area. We are extremely excited to bring our show and our support to the Orlando area and surrounding cities like Clermont.”

Laughs for the Troops will also host a comedy showcase and dinner Sept. 21 at Disney Shades of Green Resort, followed by the annual Comedy on the Greens golf tournament Sept. 22 on Disney’s Magnolia Golf Course. Tickets for both events can be purchased at laughsforthetroops.org.

Thomas founded Laughs for the Troops in 2011 as his way of giving back to veterans and first responders in the name of his father, Tom Brown, after watching him deal with PTSD from his World War II service. As the organization grows, long-term plans are to establish the Serenity Project, a center in Central Florida for veterans and first responders to utilize dogs and horses for therapy without financial worry, the release states. 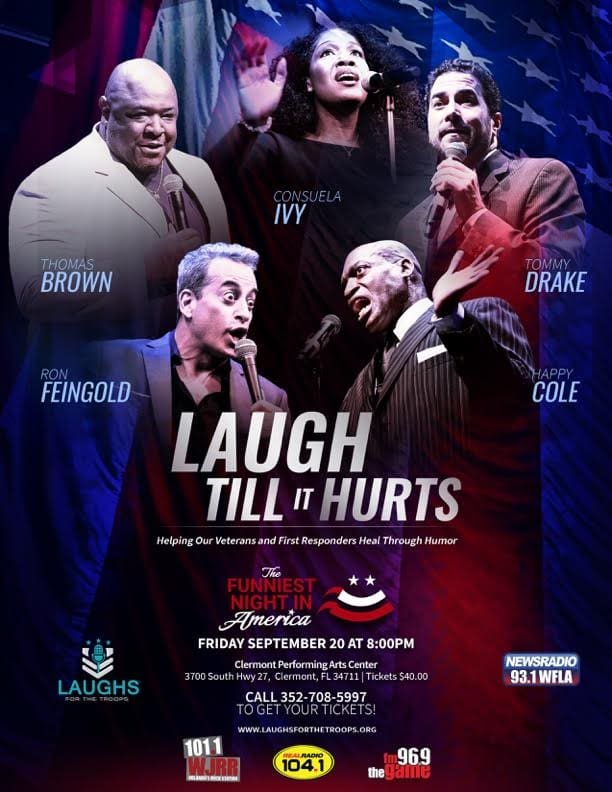