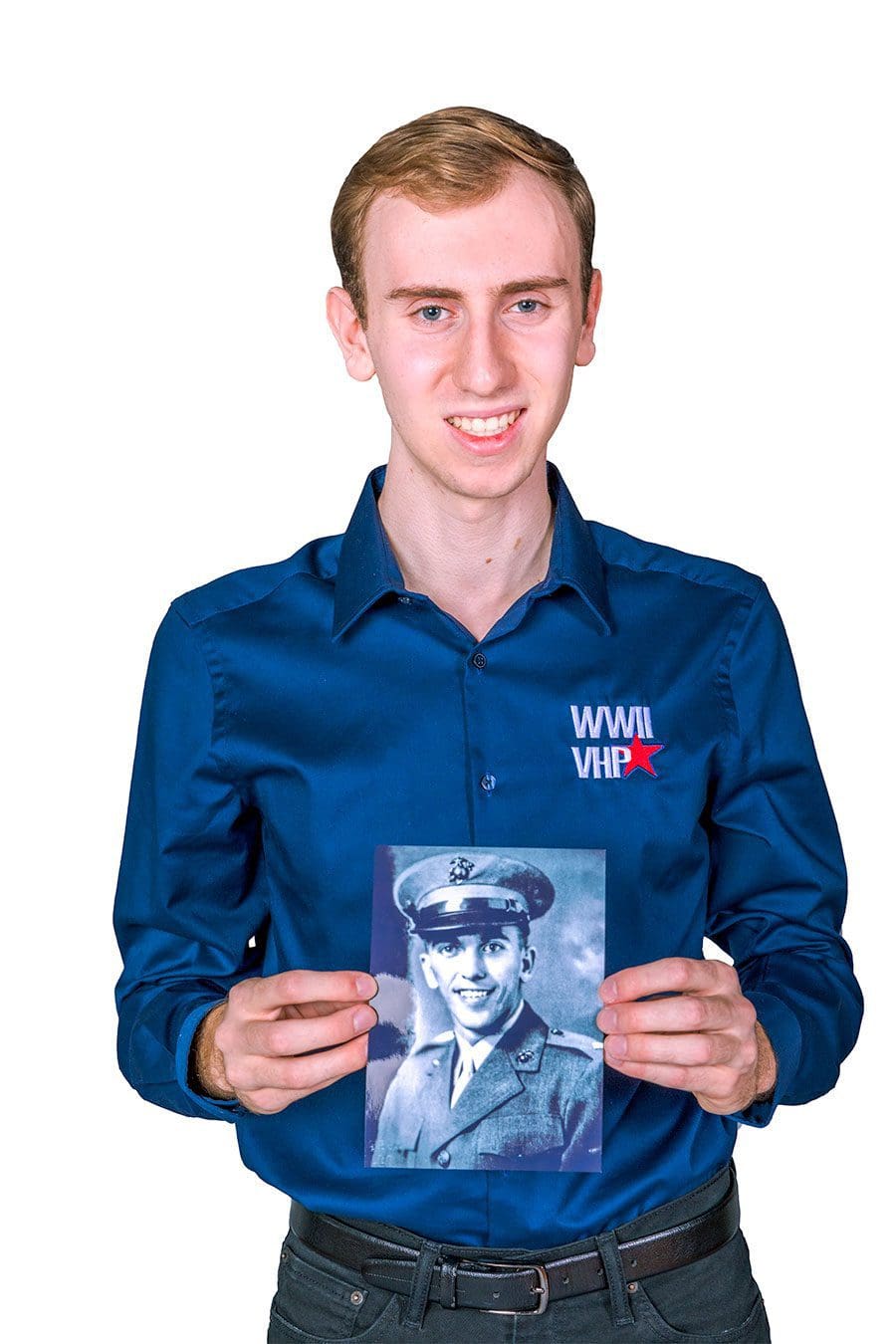 A mere two pages on World War II in Benjamin Mack-Jackson’s fifth-grade history book simply served to whet his appetite about the era.

Benjamin says he was left with the feeling that there had to be more to the story, so he began researching the topic by visiting the library, checking out and reading books about WWII and watching any documentaries he could find.

He was amazed at the vast history of WWII veterans and events and after a couple of years, something clicked, hence the beginning of Benjamin’s World War II Veterans History Project that today is a nonprofit organization dedicated to preserving WWII’s history.

“Reading or watching stories about these veterans is one thing, but when it hit me that I could actually talk with them myself, it changed everything,” says Benjamin.

After explaining that many WWII vets are in their 90s or older, he adds: “Telling the stories of the generations that are leaving us now, I think is important because they are not going to be with us forever. To capture these stories now is critical.”

In a nutshell, Benjamin, now 18, set out to talk to as many WWII veterans as possible. In the past four years, he’s crisscrossed the world and interviewed about 100 men and women, many who have since passed away.

Benjamin says he’s traveled all across the United States for interviews, plus he went to France last summer, and also to Germany, Belgium, Holland and Luxemburg.

“It’s nice to know that these veterans’ stories are told, that they lived a long life and that their memories will be preserved for future generations through my interviews, and the families are incredibly grateful for the videos which preserve their relative’s memory for time,” he says. “It’s all about the connection too, because once you show them that you have a genuine interest and a true understanding of what they are talking about, they’re more than willing to open up about their stories.”

Benjamin recalls the youngest veteran he’s interviewed was 92 and the oldest, 104. He says he remembers his first experience clearly.

“I didn’t really know what to expect, I wasn’t sure what it would be like, but it was a fantastic interview. Just witnessing the emotion behind the veteran’s words had a profound effect on me,” Benjamin says of his discussion with Charles Konsler, a veteran who lives in Clermont.

“He was an Army Air Corps fighter pilot who flew P-51 Mustangs in the European theatre and shot down a German plane over Sweden. His story of service and sacrifice; it really had everything that you could want in a veteran interview and not only was I able to capture those memories, but it inspired me to continue on with the mission,” says Benjamin.

Irving Locker, a 96-year old Army veteran from The Villages who has also been interviewed for the project, says he is extremely proud of Benjamin and what he is doing.

“I still lecture, too, but I’m 96 years old now and have slowed down a little, so it’s people like Ben who can keep it going, especially for the younger people,” Irving says of WWII history and the message that freedom is not free. “It was 75 years ago and if somebody doesn’t talk about it, it’ll all be gone. It’s quite a history and people have to know it.”

According to Benjamin, he videotapes every interview and periodically posts the videos on his website and Facebook pages for people to watch.

He’s also transformed video segments into mini documentaries and recently released his first full-length feature documentary, Normandy Revisited, which tells the stories of 16 D-Day and Battle of Normandy veterans, and features the first journey back to the battlefield where one of the veterans fought.

And that’s not all – Benjamin travels the world speaking to veteran groups, organizations and at schools, utilizing a traveling museum he created from WWII artifacts like uniforms, helmets, photographs, Samurai swords, coins, medals of valor and more, that vets and their families have donated to him. 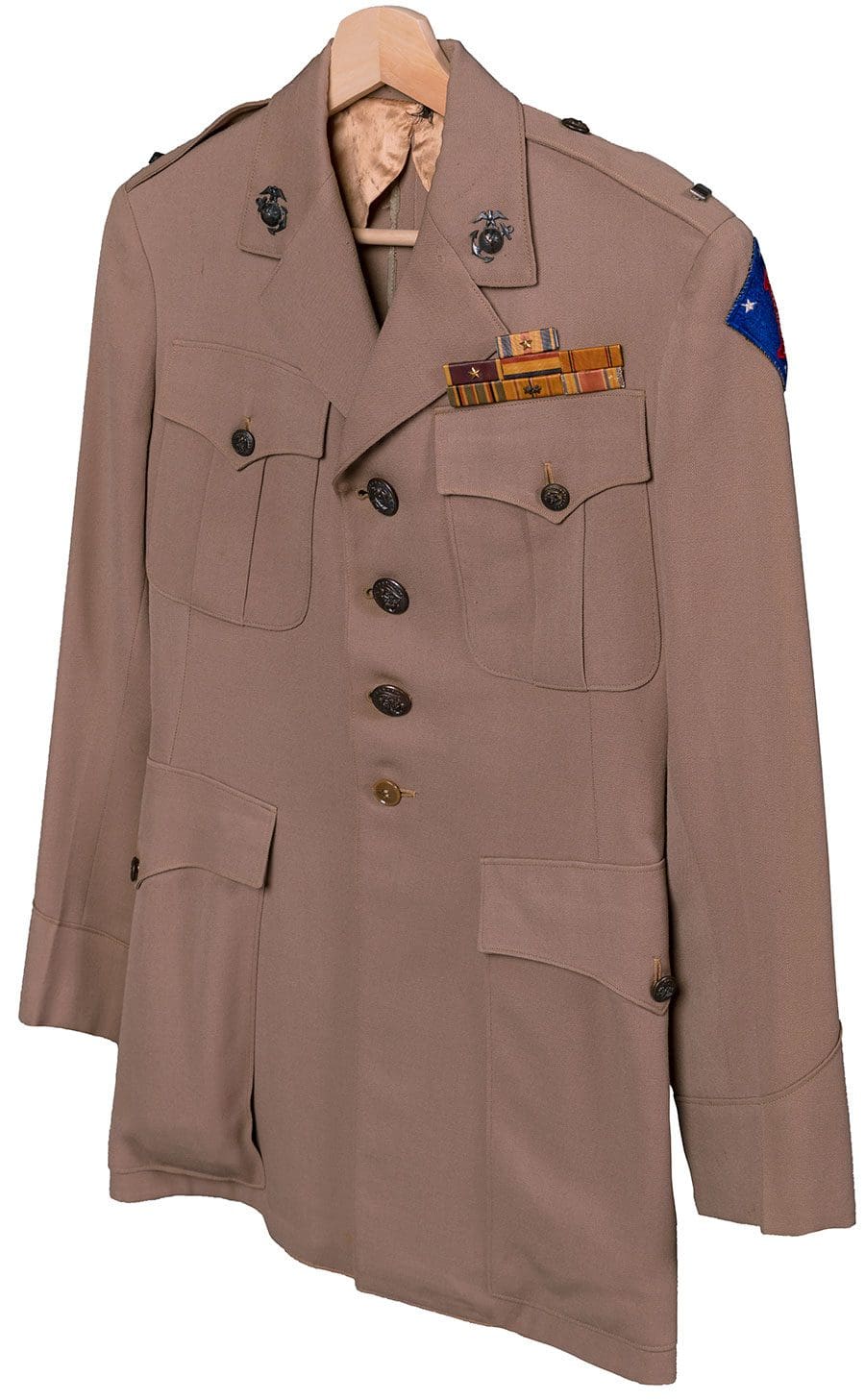 Recently, he also acquired one of only 19 authentic Higgins Boats – the landing craft vessel that carried soldiers safely to shore on D-Day – still in existence and is now raising funds for its restoration.

Benjamin says the Higgins Boat is in very rough shape, yet still in usable condition, which is incredibly rare.

“We’re in the beginning stages of restoring this historic craft as part of our collection, which will allow people to get up close and see this piece of history. It will also allow WWII veterans the opportunity to reconnect with this iconic image from their WWII time service, that brought them ashore on numerous combat landings on European and Pacific theatres.”

Benjamin says the vessel is currently in storage, but he hopes it can soon be displayed.

“We’ve had help from numerous organizations and individuals interested in restoring the vessel back to seaworthy condition and what we want to do is completely restore it and make it available to the public, either on loan to a museum somewhere in the U.S. or around the world,” Benjamin says. “The main goal is to make it available to as many people as possible. The last thing I want to see is something like this sitting in storage forever, because that is not sharing the story with others.”

In the midst of all that, Benjamin is a freshman at Rollins College in Winter Park, where he majors in international relations and minors in history; degrees he hopes help him carry out his dream. He also wants to see school curriculums improved to include more comprehensive and interactive WWII history.

“I want to continue my work making documentary films, preserving stories of veterans and traveling around the world sharing these stories of hope,” Benjamin says. “I hope that through my organization, and just my passion for this, will lead me on a full career of historical education and preservation.”

Overall, Benjamin thinks he’s making a difference for veterans because the interviews let them open up, tell their stories and carry on their legacies for their families and future generations. He says the interviews connect people and help the younger generation appreciate the sacrifices of those before them. He’s found that many families have never heard those stories first-hand.

“It’s a lot of work but it really pays off. It’s a rewarding experience to know that what I’ve been doing is making a difference. That’s what’s it’s all about, inspiring people and making them aware of the stories that are often forgotten,” says Benjamin. “Oftentimes, the video I take becomes the last video taken of them and the photographs I take oftentimes become the last photographs. Families are very appreciative about having their WWII veteran interviewed because it’s essential in preserving their legacy.”

Benjamin adds: “It’s really incredible to see how much the WWII generation went through and that they were able to come back and build the country we know today because well, the entire nation is built on the grounds of World War II and the victory that our brave men and women fought for.”

For more information, to watch interviews or to donate funds for Benjamin’s project, visit ww2veteranshistoryproject.com or its Facebook page.