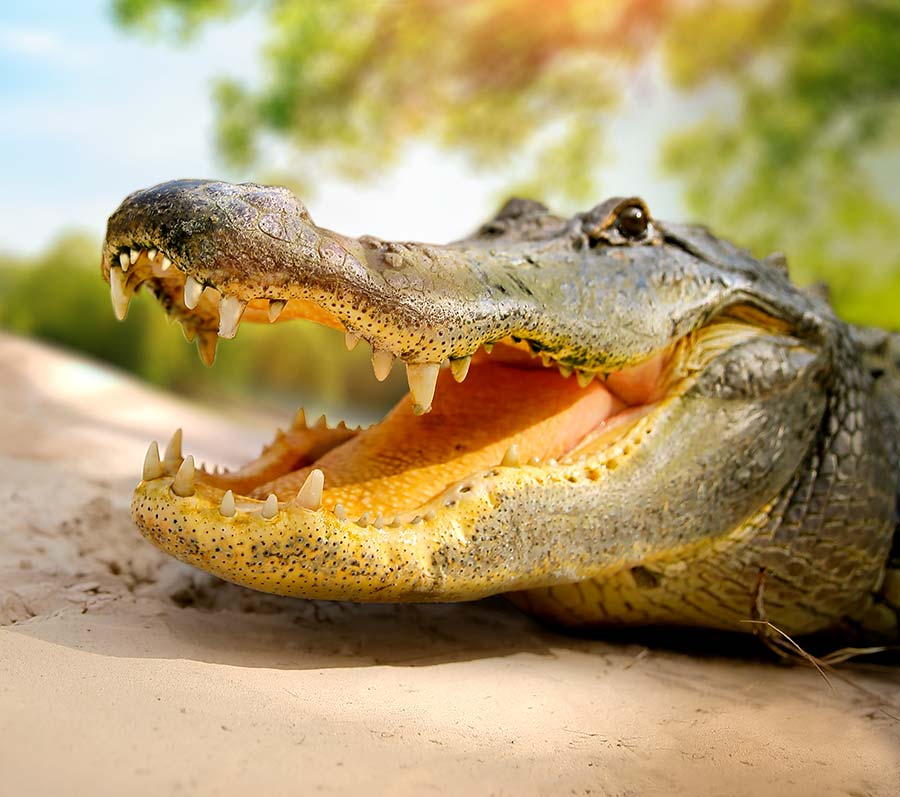 Few things symbolize Florida as much as alligators, and visitors to GatorWorld in Wildwood have an opportunity to see these fascinating creatures up close.

Standing on an elevated wooden platform, 15-year-old Mattigan Peddigree of Pennsylvania uses a bamboo cane pole to lower a turkey hot dog into the murky water below. As the snouts of adolescent alligators emerge to the surface, their black slit pupils fixate on the snack.

Within seconds, one of them leaps from the water, slams its powerful jaws shut, and consumes the food. The teenager is awestruck. She smiles as her grandmother furiously clicks her camera to capture this rare interaction between human and alligator.

Every day is feeding day at GatorWorld Parks of Florida, a 15-acre preserve and drive-through park in Wildwood with more than 400 rescued alligators. For visitors like Mattigan, it’s an opportunity to receive an up-close and personal look at the state’s most popular reptile. 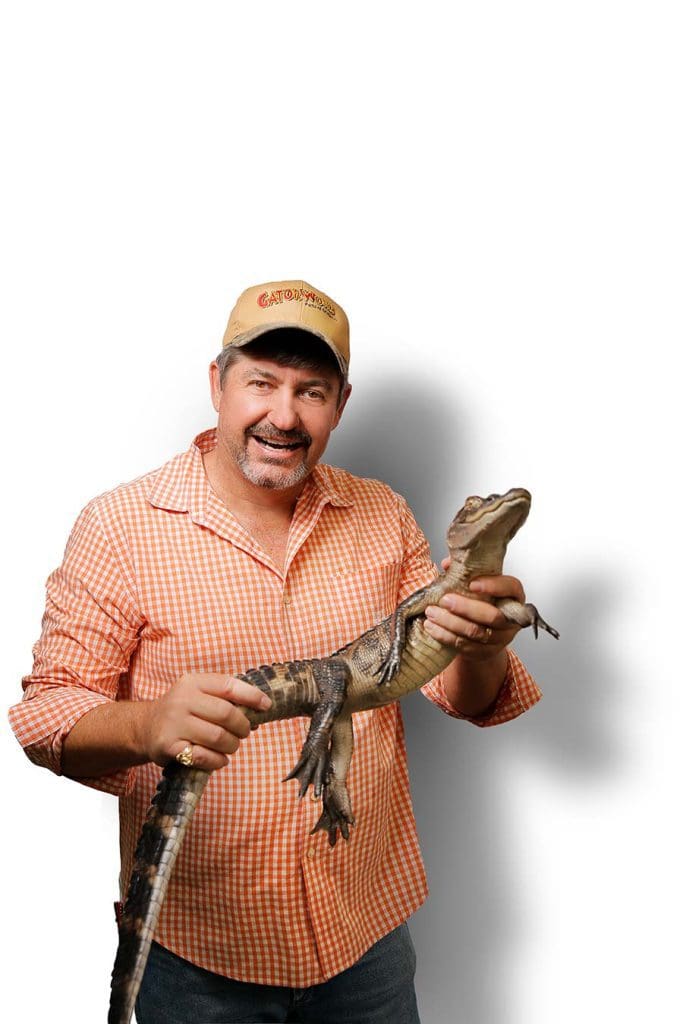 “Feeding an alligator by using a cane pole helped me realize how strong these animals are even as babies,” Mattigan says. “I’ve never seen an alligator before, and I cannot wait to go back and tell all my friends about this. These are really fascinating animals.”

Indeed, alligators carry a certain mystique. They’ve been around 200 million years and are as much a part of Florida as oranges, palm trees, and hurricanes. In fact, they are central to the state’s identity. There’s a toll road named Alligator Alley. Hundreds of businesses have “Gator” in their names. The state’s flagship university uses the alligator as its mascot.

With that kind of publicity, it’s no surprise alligators evolved into something more than expensive handbags. They became popular tourist attractions. After all, visitors to the Sunshine State want to be amused and awed, and coming within close proximity to one of nature’s fiercest animals fulfills that desire.

The animal’s popularity was the driving force behind local businessman Don Buckner’s decision to open GatorWorld Parks in October.

“For me, the idea was born in 2000 when members of the Orlando Tourism Commission informed me that the top three items on Florida tourists’ to-do list were visiting Disney World, going to the beach, and seeing an alligator,” says Don, owner of Okahumpka-based Vac-Tron Equipment, the country’s largest producer of industrial vacuum equipment. “I also went to the welcome center on the Florida-Georgia line, and employees told me the most common question they receive is, ‘What’s the best way to see an alligator?’”

After 17 years of careful planning, Don feels he came up with the perfect answer to that question. The simple drive-through concept at GatorWorld allows visitors, in the comfort of their car, to drive down a gravel road shaded by oak trees and past four double-fenced compounds where alligators of all sizes reside. Some gators are seen cooling off in specially constructed pools that simulate their natural environment, while others bask in the sun to control their body temperatures. Motorists are allowed to stop and photograph the animals but must remain inside their vehicle.

Following the driving tour, visitors can stand atop a raised platform and dangle a pole over a swirling collection of hungry young alligators and enjoy the excitement of petting and holding an adolescent alligator. If they prefer interacting with more cuddly animals, there’s a petting zoo stocked with bunnies, Nubian goats, and miniature cattle. And no trip to GatorWorld is complete without a picture alongside Al, the park’s 13-foot mounted alligator estimated to be 80 years old at the time of his death. For the record, the largest alligator ever caught was 15 feet, 9 inches long.

All these activities can be enjoyed in less than half a day.

“Location, time, and cost—those are three hurdles we eliminated by opening this park,” says Don, who in 2000 was awarded the Ernst and Young Entrepreneur of the Year award in Florida. “We don’t have alligator shows or anything like that. We provide a quick, simple, and economical way to see an alligator. We are more like the old roadside attractions you used to see up and down Florida’s highways.”

Those Florida-centric roadside attractions, known for their bold-colored signs, attempted to lure motorists off the road with venomous snakes, colorful macaws, and dazzling mermaids. Many began disappearing in the 1970s when theme parks replaced the wonders of nature with white-knuckle thrill rides. However, alligators continued drawing big crowds, as evidenced by the 400,000 annual visitors to Orlando’s Gatorland.

Seeing an alligator was definitely on the bucket list of Colleen Hoang, a New Jersey resident who visited GatorWorld in early November. For her, the highlight was watching her 7-year-old son, Cameron Hoang, pet an adolescent alligator named Abbie.

With its mouth taped shut, Abbie remained perfectly still while nestled comfortably in the arms of a park employee. Cameron, a little apprehensive at first, used his index finger to poke the baby alligator. After a few minutes, he worked up the courage to gently pet the animal using his entire hand before posing for a photograph with Abbie in his arms.

“There are few places you can actually go to hold an alligator,” Colleen says. “If you tried it out in the wild, you’d get hurt. I think it’s great that they have such a controlled environment, and the best thing is you’re guaranteed to see an alligator when you come here.”

Savannah Mosher, a resident of upstate New York, came to the park with a bad case of gator fever. Watching documentaries intrigued her, but she never had an opportunity to see one in the wild or in captivity. After completing the driving tour, she was mesmerized by the reptile’s sheer size. Some alligators in the park weigh more than 500 pounds.

“I’ve seen alligators on television, but seeing them up close like that gives you an entirely different perspective on how massive these animals truly are,” she says. “Being around alligators is something new for me. The only animals I see in upstate New York are chickens, cows, and sheep.”

“This is the first job I’ve ever had,” she says excitedly. “I love being around alligators because they’re so powerful and mysterious. However, it can be unnerving when I have to grab a baby alligator out of the pen for petting because their mouths are not taped.”

The other exciting aspect about her job is answering questions and providing visitors with fun-filled facts. Did you know, for instance, that an alligator can run 30 mph for 20 yards? Some more useful information: electrical tape can keep a large alligator’s mouth shut because its upper jaw muscles are considerably weaker than the muscles used to snap the jaw shut. Just don’t try this at home. Or anywhere else, for that matter.

Here’s another interesting fact: All alligators at GatorWorld were purchased from alligator farms, where they are sold for their hides and meat, or from trappers, who euthanize alligators when they are deemed nuisances. Don isn’t merely introducing these animals to the public; he’s also giving them a second chance at life.

The animals receive a daily feeding of food pellets, which look similar to dog food and is high in protein, vitamins, and minerals.

Knowing these animals are not being euthanized is reassuring for alligator enthusiasts such as Dennis Spafford of Inverness.

“GatorWorld is a great asset because the species is being protected and nobody harms them here,” says Dennis, who took his grandchildren from New Jersey to the park. “I think it’s important to protect alligators and let people enjoy the beauty of these magnificent animals because I don’t know what the future holds for them.”

This much he does know: The allure of Florida’s screaming theme parks and five-star beachside hotels has not dampened man’s curiosity and intrigue over the alligator, one of the few remaining links to the age of the dinosaur.