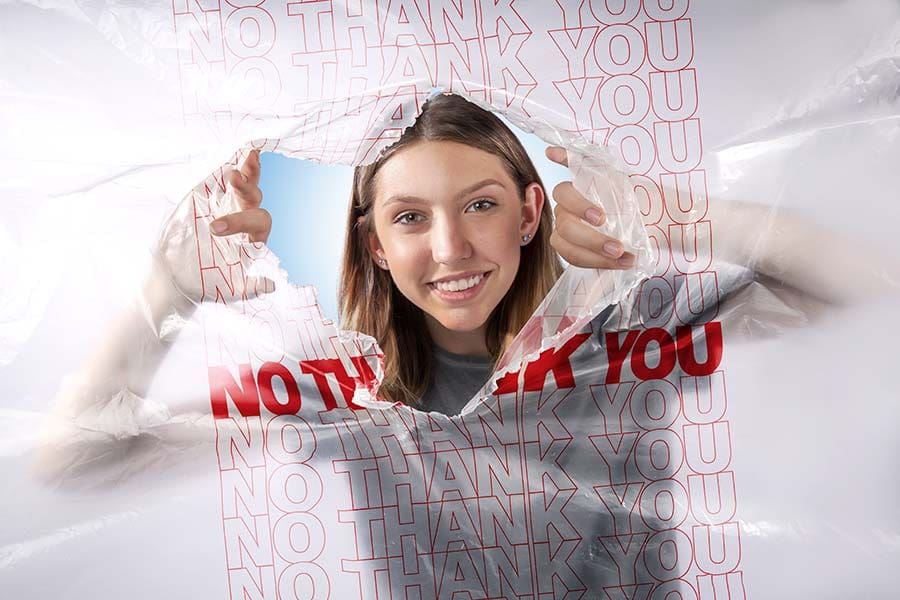 In the 1967 film “The Graduate,” Dustin Hoffman’s character received one word of advice about his future: plastics.

Indeed, in the 1970s, plastics took over manufacturing and consumerism in many forms, including the introduction of plastic bags in supermarkets. But few people could have imagined that one day, 5 trillion plastic bags would be produced annually.

Zoé Mueller, a Mount Dora eighth-grader, has a clear image of what she wants her future to hold: no plastics.

She created a successful campaign, Plastic Bag Free Mount Dora, in which many city merchants agreed to use and promote alternatives to plastic bags in an effort to help protect waterways and wildlife.

What started out as a project to earn a Silver Award in the Girl Scouts expanded to include partnerships with green companies and environmental organizations, and led Zoé to create more initiatives to persuade people to stop using plastic bags. Her next project, to earn a Scouts Gold Award, will be to petition the state Legislature to repeal a law prohibiting the regulation of plastic materials.

At 13, Zoé seems mature beyond her years. She knew she wanted to develop a project to help the environment because she had noticed the waste of plastic bag use at an early age.

“I started realizing how many plastic bags I saw being used just when I went to the grocery store, and that was a small amount of time,” she says. “If you take that and multiply it by how many times a day (that happens), that’s a lot of plastic bags in just one grocery store.”

Zoé asked herself, “Where does all of this go?” She studied the subject and learned that plastic bags and other forms of plastic are hazards to the environment because they’re not biodegradable. They photodegrade, meaning they break down into smaller and smaller pieces of litter, contaminating soil and water.

The hazardous result is that tons of plastic waste wind up in waterways and oceans, where marine life mistakes floating plastic for food. Plastics pollution kills more than 1 million seabirds and 100,000 marine mammals each year, Zoé points out, a disturbing fact that hits home in lakefront communities in Lake County and coastal towns of Florida.

She plans to educate people about pollution and recycling through a program she calls “Trash Talk with Zoé.” She’ll make presentations at schools and encourage students to sign a pledge that reads, “I am 300 less,” representing a commitment to stop using that 300-bag average each year. Then she’ll keep track of how many plastic bags are being saved from the Florida environment.

“I’ll be reaching out to as many people as possible to try to build this up so we can try to eliminate as many bags as we can,” says Zoé, who loves planning her projects. 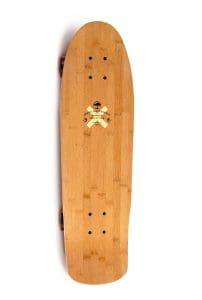 To engage students her age, she’s going to give away skateboards provided by Arbor, a green company based in Venice, California. Zoé, who skateboards, wants to show other kids that’s it’s cool to protect the environment through this message: “These products are green, they’re good for the environment, and they’re fun.” She also has a sponsorship arrangement with Preserve Products, a Massachusetts company that makes houseware from 100 percent recycled materials and provides items for Zoé’s giveaway promotions.

She got the word out about plastic bags through a website (plasticfreemountdora.wixsite.com/website-7) and an Instagram site (instagram.com/plasticfreemountdora). The well-spoken teenager also made City Council presentations, which generated interest among businesses.

With the City Council’s endorsement, Zoé contacted retailers and encouraged them to display window decals reading “Mount Dora Bag Free Business.” The decals identify the stores as users of alternatives to plastic bags. Waste Management provided reusable shopping bags for Zoé to distribute and also paid for her printing needs.

More than a dozen businesses now display the decal. Zoé says the owner of Las Palmas Restaurant, 351 N. Donnelly St., decided to switch from plastic to paper bags after hearing her speak at a City Council meeting.

Zoé also nudged the Magical Meat Boutique, 112 W. 3rd Ave., toward biodegradable bags and products. Husband-and-wife owners Phil Barnard and Kate Bellamy took a look at the plasticware used at the restaurant and British pub. They made a move to use straws made from corn products, as well as other plant-based items, Phil says.

“(Zoé) gave us a bit of a kickstart,” says Phil, who also credits Kate with pushing for more recycling among downtown merchants. 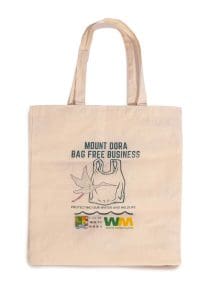 “When Zoé came in, she was right alongside our philosophy for the store,” says Sandra, adding that owner Deanna Wallin was excited to be a part of Zoé’s community project by displaying the window decal.

Zoé did run into a few dissenters among business owners whom she believes didn’t want to put in the time or expense to switch from plastic to paper bags.

“I don’t blame them because it does cost a lot to switch over,” Zoé says. “Plastic’s a lot cheaper, but the state can prohibit us from banning them but they can’t prohibit us from not using them. We’ve got to take the initiative because they’re not stopping us from doing that.”

Zoé wants to change the state law because she believes cities should have the freedom to make their own choices about plastics. Some communities agree, as municipal governments are taking action.

The status of Florida’s law essentially “banning bans” on plastics appears murky. The law was related to a 2010 study on recyclable materials by the state Department of Environmental Protection. Statute 403.7033 states, in part, that until the Legislature adopts the DEP recommendations, no local government, or local or state government agencies may regulate the use of auxiliary containers, wrappings, or disposable plastic bags.

However, in a lawsuit over Styrofoam containers between the city of Coral Gables and the Florida Retail Federation, a judge noted in 2017 that the Legislature had not adopted the DEP recommendations and the statute guidelines were “unconstitutionally vague.” This left cities in limbo with regard to regulating recyclable materials, the judge said.

Coral Gables was allowed to institute a ban on Styrofoam containers, and in May 2017, became the first city in Florida to ban single-use carryout plastic bags at city retailers and city events, according to news reports.

Other cities have made similar moves, such as Pompano Beach requiring food vendors at city events to avoid putting takeout food in plastic foam clamshells; Palm Beach County enacting a balloon ban at oceanfront parks; and Hollywood enforcing a ban on plastics at restaurants east of the Intracoastal Waterway, news reports state.

Locally, other communities in Lake and Sumter counties haven’t specifically grabbed hold of the plastic bag issue, but many are environmentally conscious. The city of Clermont, for example, hosts an annual Earth Day & Lake Cleanup with environmental education for adults and children, and the collection of more than 1,800 pounds of trash annually, the city website states. The city’s Environmental Services Department reports that as of 2018, about 20 percent of Clermont’s waste stream is diverted from landfills. 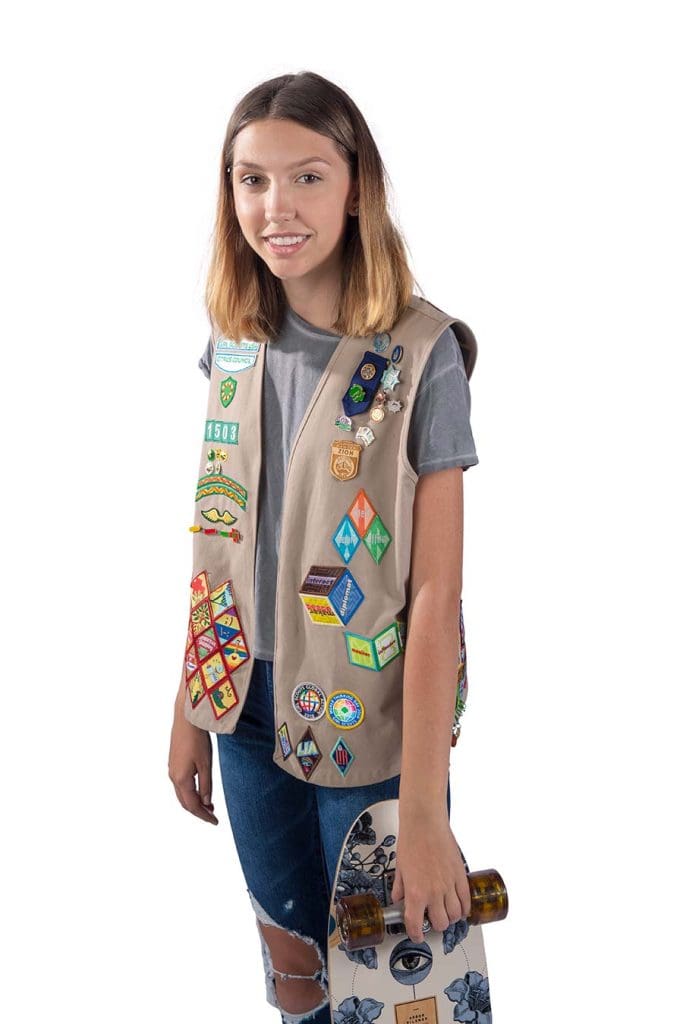 Tavares utilizes “green building” initiatives for construction, and also has participated in America in Bloom, a national program that rewards cities for planting trees and flowers to contribute to a clean environment.

In Zoé’s hometown, the Mount Dora Friends of the Environment co-sponsors an Earth Day festival each April, and this year’s theme was “Living Plastic Wise.” She hopes to plan some events with the organization in the future.

Zoé has a lot on her biodegradable plate. She draws inspiration from her mother, Jennifer, who gives her daily affirmations like “You can do this!” For confidence, she credits the Girl Scouts’ tradition of knocking on strangers’ doors and selling cookies, which she’s done since age 7.

“That took a lot of courage,” Zoé says. “After that, I was like, there’s nothing stopping me from doing this. I just have to stand up and say something.”