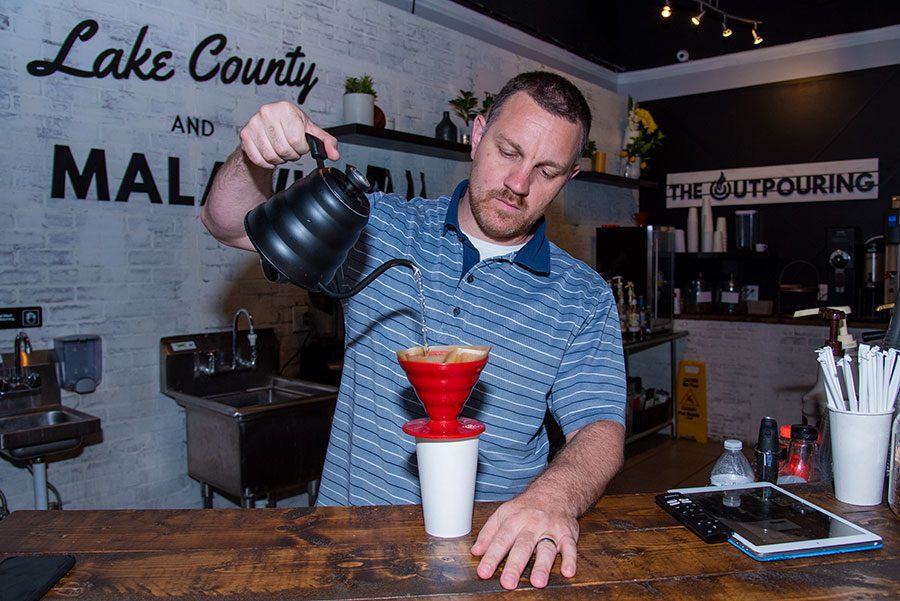 In June 2019, Brent Joseph opened the doors to The Outpouring Coffee, a non-profit shop and roastery in Clermont like no other.

The seating area is warm and welcoming, the friendly vibe puts people instantly at ease, and the menu includes chai, teas, matcha, cold brews, cappuccinos, macchiatos, lattes, and more, in a variety of flavor options.

Other goodies like muffins, grilled cheese sandwiches, bacon, egg and cheese quesadillas and waffles are also on the menu.

Not only that, you can purchase packaged or bulk coffee roasted on site by Brent.

The most unique thing about the place, however, is the inspiration that comes with every order, since all profits go to making a better life for people – especially children – in Malawi.

“I opened the coffee shop to raise money and awareness for the initiatives we have in the country of Malawi,” says Brent. “Our thought was that the shop would increase public awareness for what we’re doing, with hopes that people would want to support our efforts.”

Brent’s passion stems from a trip to Kenya he took with his brother in 2017 to help to an individual Brent had been introduced to months before.

While there, the pair met a group of people doing missions work at the Nyarugusu refugee camp in Tanzania, and other parts of Africa, including Malawi.

That group, which has since become his team, began doing traditional independent missionary work, like church planting and leadership development, in about seven different locations throughout the country. In time, Brent realized a pressing need existed for clean drinking water, and later consolidated their efforts to one area.

Locals, he says, were drinking contaminated water being taken directly from creeks and rivers, and as a result, the death rate, especially among infants and children, was extremely high.

“The issue when it comes to water contamination is really a cholera issue. Statistically, in the country of Malawi, the mortality rate is high because you have kids in rural areas with no access to normal water sources, only very small creek beds,” Brent says. “That’s very typical, but that water is contaminated, so the kids drink it, and they die. That, unfortunately, is very normal there.”

One day, he and his team visited Ndirande, a village near the center of Blantyre, the second city of Malawi. There, they noticed dozens of what people there refer to as “street kids.”

Brent says most of the children were under the age of five, living under bridges and just running around unsupervised, barefoot and in tattered clothes, and he was taken aback. Maybe because he and his wife have four young children of their own, he couldn’t imagine living that way, or maybe because in the United States that kind of thing, to that extent, is not a common sight.

“I was looking at them and I was like, ‘What the heck is going on with all these kids? Can we do something for them?’” Brent recalls. His inquiry was the beginning of The Outpouring Kids, a school and home to some of those kids and many more.

“I said, ‘Can we rent a space where we can put them all, wash and feed them, put clothes on them and get a teacher to come in there?’ They (team members) were like, ‘Yeah, that’d be great,’ and the next week, they had it all figured out, and the school was rolling.”

The Outpouring Kids opened in early 2018 with about 30 children. Today, the school provides food, clothes and education to about 125 vulnerable youths who are being taken care of by aunts, uncles, grandparents, and, in some cases parents. About 15 of the kids with no family or homes to speak of live there full time.

In addition to operating the school, Brent and his team provide clean drinking water for people throughout Ndirande and Blantyre, by way of five wells they’ve drilled and access points they’ve established for distribution to those in need.

“You can come into our store here in Clermont right now as a random person on the street, go into the bathroom, put a cup up to the sink, fill it with water, walk out and no one would even know or care that you took a cup a water, but in other cultures, water is hard to find,” Brent explains. “Then, in areas where you don’t have access to clean water, people charge for water access. If people have a well, they charge people to get water from their well.”

Brent adds, “Charging people that have jobs is the cultural norm, but for those parents or families or kids who don’t have money, they can get water for free at our different access points.”

Brent visits Malawi two to three times per year to ensure everything is running smoothly with the water kiosks and school, but the mission continues when he’s back in Clermont.

The amount of money it takes to keep The Outpouring Kids running varies depending on the number of kids attending, and each well costs anywhere from $4,500 to $6,000. Brent says their goal is to dig another well soon.

Still, Brent says he wishes he could do more since current efforts are barely scratching the surface of even larger systemic problems. Then there are dangers like theft, human trafficking, and more.

“It’s not like the continent of Africa is ever going to be alleviated from poverty. I don’t think that’s realistic, so there are always needs, but the question is ‘What are the greatest needs you’re aware of, and what resources are coming in?’”

On a daily basis, Brent chugs along at The Outpouring with the kids and families in Malawi on his mind, confident that Clermont and neighboring communities will join him in making a difference. He also leads a Christian-based house church and several focus groups that meet at the shop and members’ homes.

“When you learn about the conditions and things that happen there, it affects you, but when you actually see it, and you’re in it for a few weeks at a time, you think, “This is crazy, this whole world is crazy. We live in a bubble and everything else is crazy,” Brent says.

To help, people can visit The Outpouring Coffee, donate directly, try something tasty off the menu, or purchase packaged coffee. People can also visit the website and donate to the cause online.

Elyssa Stimmell, the youth and families ministry coordinator with First United Methodist Church of Clermont, says she sometimes meets people at the venue for discussions or Bible study meetings.

“I enjoy the good atmosphere and the good cause that goes along with The Outpouring,” says Elyssa. “It’s nice to know that if I’m spending time and money on coffee, at least let it help somebody else.”