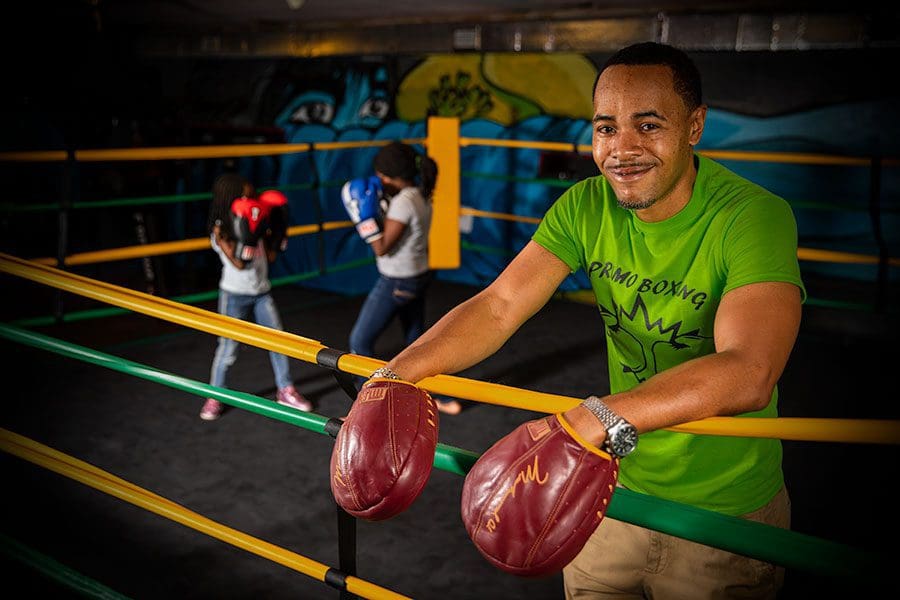 Primo Outreach Boxing Club provides youths with lessons for the ring and for life.

Nurse Carol Patterson, boxing coaches Aaron Ramprashad and Orande Richards, and Dr. Michael K. Henderson beam with pride at Primo Outreach Boxing Club, where the four co-founders oversee a gym that focuses on getting kids off the street and building their self-esteem, as well as making them fit.

Kids in Primo’s after-school program can train until 8pm weekdays at the gym, which opened in August 2019 at 2106 U.S. Highway 441 in Leesburg. They practice footwork and ring work, punch heavy bags and speed bags, and improve their physical conditioning through core work, calisthenics and circuit weight training. Primo also is where youths learn self-control tips and interact with peers. Parents are invited to work out at the gym, too.

“We are just trying to be a part of the community, to be a problem-solver and help the kids,” Carol says. “The best compliment is hearing parents say, ‘Oh, wow! My child is different since he started here a month ago. He listens more, he’s paying attention, is more focused. I can see the confidence going up.’”

Blake Yates, 13, of Leesburg, relishes each moment he spends at Primo.

“Being here is a stress reliever,” he says. “I feel a lot stronger since I’ve been coming here, and it releases a lot of anxiety because you’re not thinking about anything else. We also make a lot of friends because you have time to talk and get to know each other.”

“Being here helps me get rid of anxiety, and it has given me more confidence. I feel a lot stronger, too,” Julio says.

“This has been very good therapy for him, a very big change,” adds his father, Julio Cesar. “He had a lot of problems with anxiety, and one of the things somebody told me was to have him exercise. He tried different exercises before he finally tried boxing. Now, since he’s been doing this, he doesn’t want to stop. He wants to do it every day. I’m so glad we found a place like this. People are so friendly here. This has been very good for him.”

“There are kids who come in here and you can tell the changes that have been made because of the gym,” he says. “Some become healthier and they can’t believe the weight they’ve lost. They build self-confidence, and when I see someone make a positive change in their life, that’s worth it.”

He says boxing provides a total body workout that helps with rhythm, timing, balance and coordination, and also benefits athletes who play basketball, football and soccer.

Michael is involved in the gym’s nonprofit program, Academy of Three Rings, where he works with young people who are socially challenged and may be at risk of winding up in the court system.

“The prevention component actually starts at the gym. We get them off the streets to come to the gym and that is one way to keep them out of trouble,” says Michael, adding that referrals can come from attorneys, judges, parents, schools—anyone who fears that a young person is heading down the wrong path.

“Instead of locking them up, we’re saying let’s give them a second chance to turn their life around,” Michael says. “The millennials are the fastest-growing population, and we need to make sure the millennials are OK.”

The gym also is expanding with new programs for adults and seniors.

“We’re trying to cater to everybody, and that is what separates us from being a regular boxing gym,” Carol says. “We’re looking at how can we make a difference in everyone’s life. It’s all about helping people.”

The gym recently signed up with SilverSneakers, a 65-plus program that is included in many Medicare plans. This summer, it will join Rock Steady Boxing, a program aimed specifically at people newly diagnosed with Parkinson’s to help them fight back against the disease. Primo’s coaches will take classes to become RSB-certified trainers.

Carol says the boxing exercises are touted as being “neuro-protective,” slowing down further decline and attacking Parkinson’s at its vulnerable neurological points. The workouts are designed to improve overall fitness, strength, reaction time and balance.

Primo’s founders want the gym to be a place for all ages.

“The workout really helps a person de-stress. After a hard day’s work, you can come to the gym and just let it flow,” Michael says. “This is a place that brings everybody back together.”