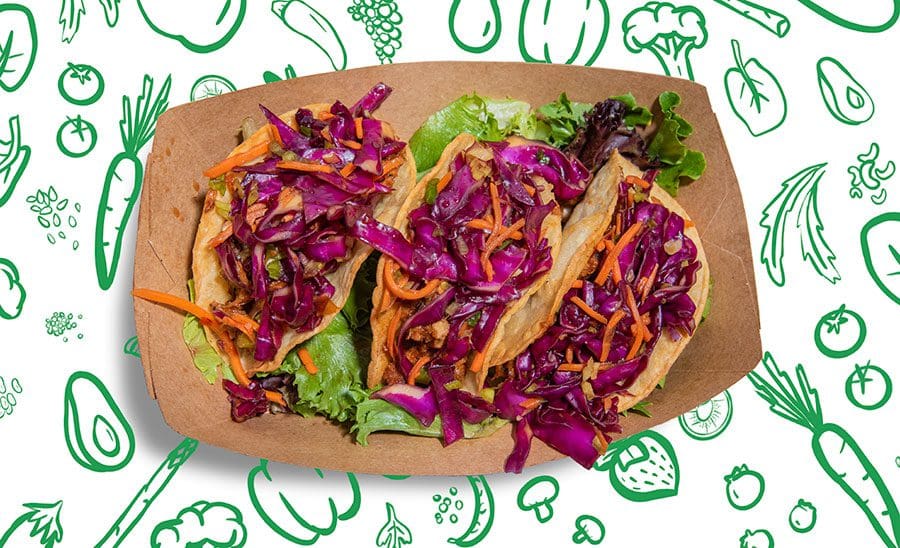 A guide on eating vegan and plant-based near you.

Being vegan can be tough, but you won’t go hungry in your neighborhood.

With that in mind, here’s a list we at Style have compiled for vegans who like trying new things, or for prospective vegans testing the waters. It can even be used by people who just like to eat clean. And no matter where you are in your neighborhood, we hope this list helps you find a place nearby where both you and your carnivorous friends can grab a great bite. Additionally, if you’re looking into living a more plant-based lifestyle, these places can help you get started!

WAVE Sushi is well known for unique sushi creations like sushi donuts, sushi burritos and sushi pizza, and luckily, they have plenty of vegan options as well! Not only can vegans enjoy veggie sushi rolls with things like avocado, red cabbage, carrots, cucumber and asparagus, but there are plenty of other choices as well. WAVE’s ginger salad, seaweed salad and cucumber salads are vegan, as are the miso soup, edamame, spicy crispy tofu and avocado fries.

You can also try a build-your-own poke bowl, with a base of steamed brown or sushi rice, house salad or mixed greens, and lots of veggie toppings. The most unique option for vegans is the veggie sushi pizza, consisting of a cucumber roll ‘crust’ with seaweed salad base, and topped with cucumber, edamame, avocado, red cabbage, radish, carrots and sesame seeds.

As far as sauces go, soy sauce, ponzu sauce and spicy sesame are all vegan options you can drizzle all over your sushi, pizza or rice bowl.

Fiesta Grande is the place to go if you’re sick of veggie fajitas being the only vegan option at Mexican restaurants. With locations in Mount Dora and The Villages, Fiesta Grande is one of the only local Mexican restaurants that offers vegan cheese and soy chick’n that can be used as a protein replacement in almost any meat dish. By doing that, you won’t have to stick with the small vegetarian menu most restaurants offer. 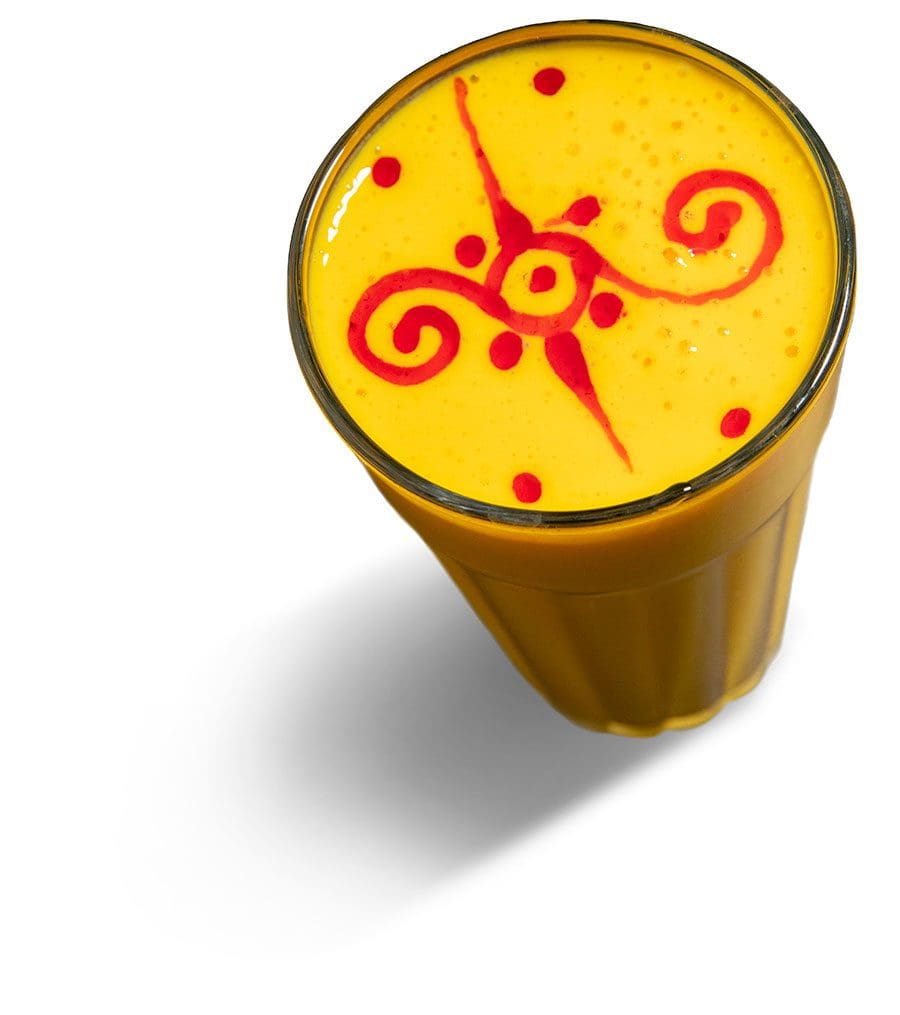 “Indian cuisine offers many healthy, varied and flavorful dishes for the vegan customer,” says Vhonda Kumar, manager of Shiva Indian Restaurant in Mount Dora. Vhonda runs the restaurant, which opened in April of 2016, alongside her husband, Davinder. Indian cuisine is one that is easily converted to vegan, though many dishes don’t need any fixing. Shiva Indian Restaurant offers many vegan options, as well as gluten free and healthy dishes. 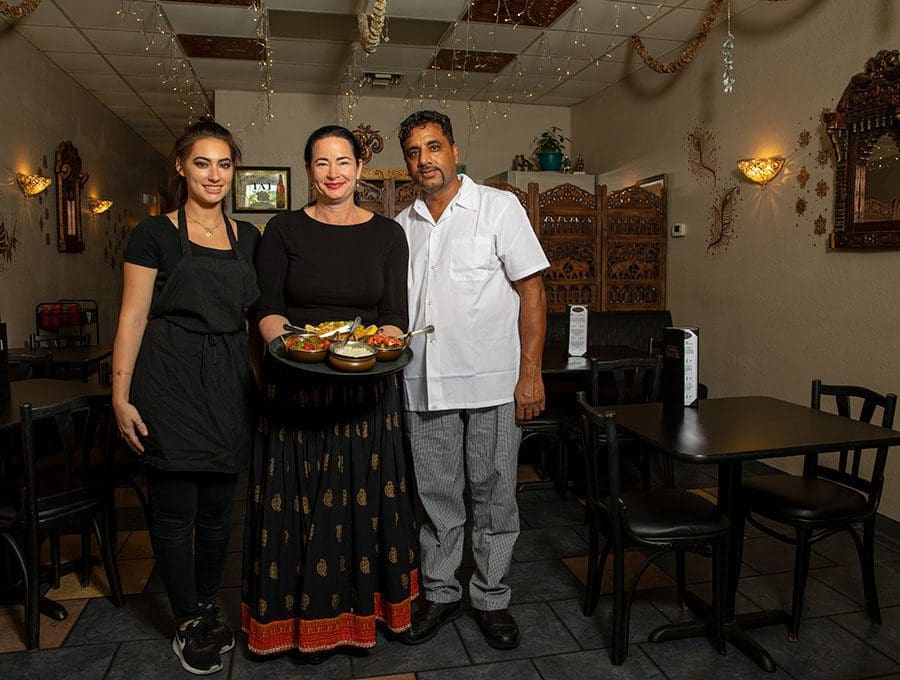 Vegan appetizers include samosas and onion Bhujias, which are “fried onions, India’s version of onion rings!” Vhonda adds. Aloo tikki-potato patties are stuffed with green peas, lentils and spices. As for the main dishes, Aloo Gobi is potatoes and cauliflower, cooked with ginger, tomatoes and various spices, which can also be made with green peas.

The Bhindi Masala is sliced okra cooked with diced onions, tomatoes and spices served semi-dry. Baingan Bharta is roasted eggplant cooked with turmeric, spices, onion and tomato. All entrees are served with basmati rice. Shiva’s menu is conveniently marked with a green “V” next to each vegan item, and the full menu can be found online. 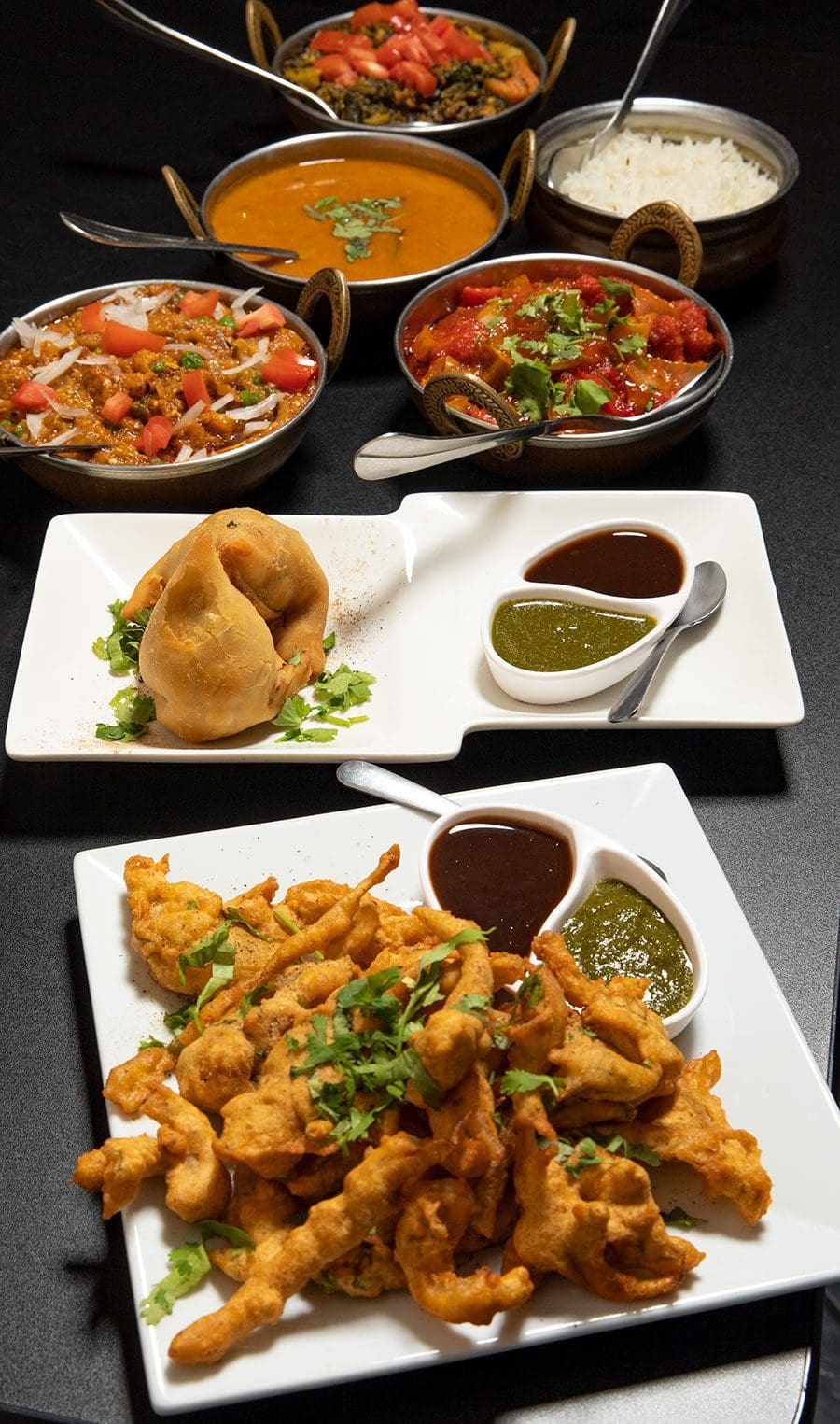 For vegans who crave pizza, Mellow Mushroom has more options than most. Offering Follow Your Heart vegan cheese, tofu, build-your-own pizzas and salads with lots of veggie options, you’ll be able to eat out with your non-vegan pals. Mellow Mushroom also has a hummus and pita bread appetizer, and the staff is very accommodating to vegans when special requests are made. For instance, if you order vegan cheese on a pizza, they know not to add butter or Parmesan to the crust. 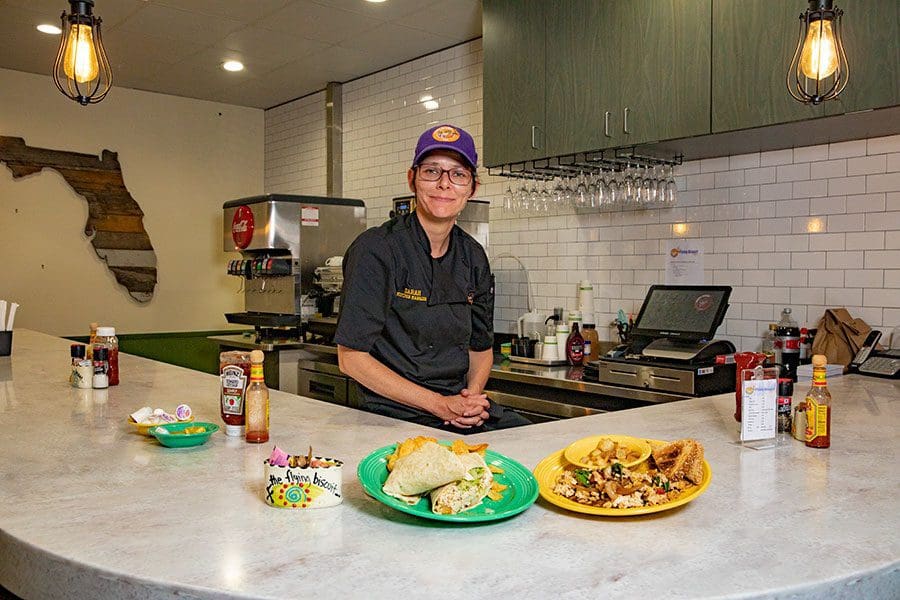 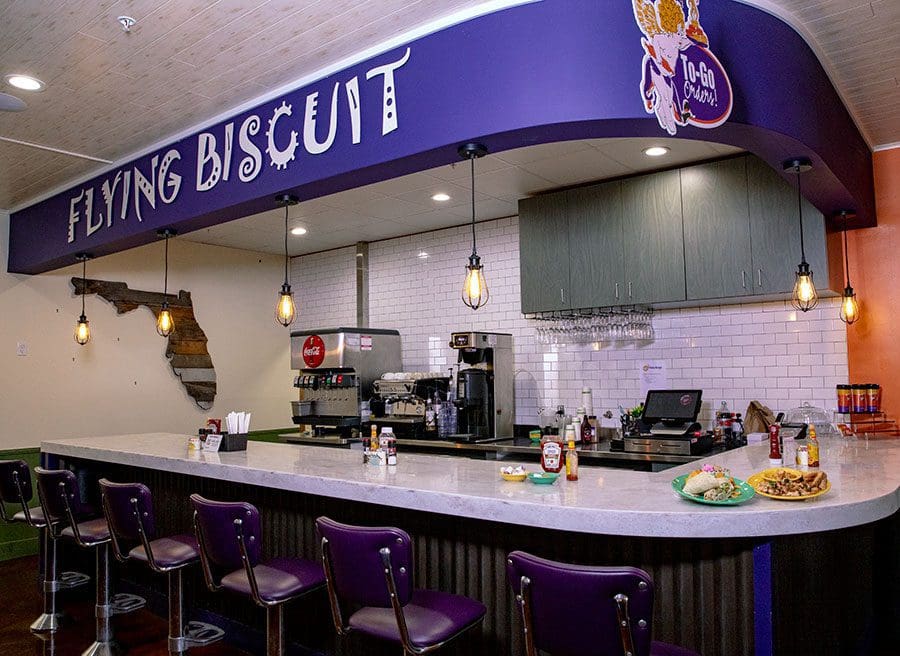 The Flying Biscuit Café is well known for its vegan breakfast scramble, which is made with tamari-marinated tofu and fresh veggies like onions, bell pepper, mushrooms and spinach. Kitchen manager Sarah Cummins says her favorite menu item is the vegan wrap, which includes a flour tortilla stuffed with tamari-marinated tofu, lettuce, tomatoes, red peppers, fresh mushrooms and basil and a spicy vegan chipotle sauce. It’s served with house-seasoned kettle chips.

Once the restaurant is opened back up to full capacity and serving its full menu, a vegan breakfast sausage and vegan burger will be added to the menu, among other items. The cafe will also continue to offer the vegan stuffed pepper.

Loving Heart Clermont has been described as “vegan lovers paradise.” The menu has just about every food imaginable, and it’s all 100% vegan. Try Asian dishes like crispy fried spring rolls, pad thai, pho, veggie dumplings and vegan beef noodles made from soy protein.

On the fancier side, try the “Sea Wander,” a tempura dish with mushroom and seaweed. Other “seafood” dishes include the “Spicy Cha Cha,” which is crispy vegan shrimp served with rice, or the “Ocean Treasure,” made from tofu skin and seaweed with a plum sauce.

Try egg and dairy-free desserts like flan, hummingbird cake, marble cake, coconut cake, carrot cake or cheesecake, or a smoothie to finish off your meal. 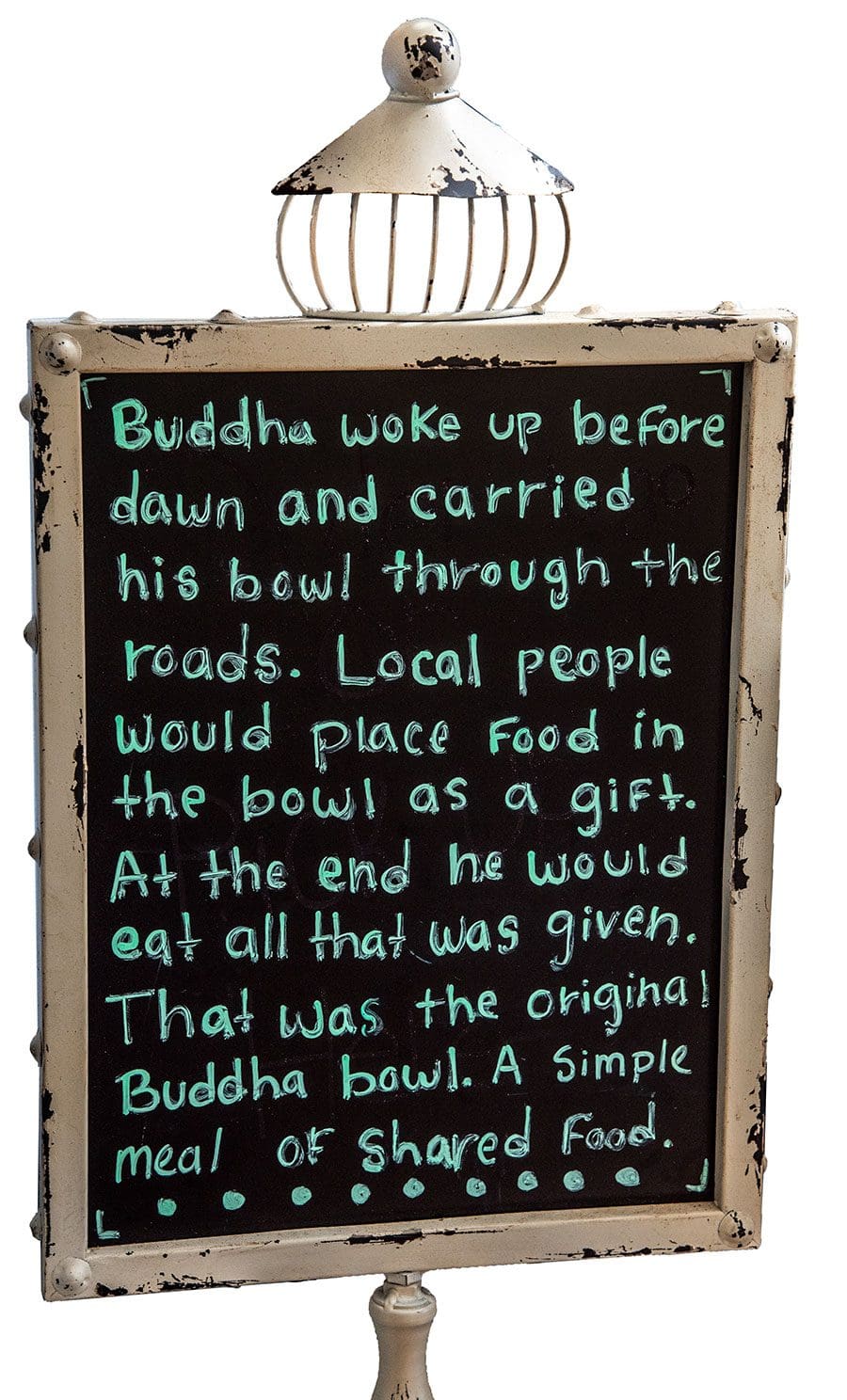 Raven Payne, the 25-year-old head chef at The Dragonfly Plant-Based Cafe in Ocala, having grown up vegetarian, mainly for ethical reasons, has now been a vegan for three years.

Finding somewhere to eat can be a challenge, as there are not many vegan places in the area, Raven says. “If I didn’t know how to cook it would be pretty hard to be vegan… We’re completely vegan here (at Dragonfly), like I make the cheese, it’s made out of coconut milk. We make pretty much everything from scratch,” he adds.

“We have people come from a 50-mile radius just to eat here, every day. Next door we have sushi but we have vegan options,” says owner Aaron Dunton, who also owns Lotus Asian and Natural Food Market, adjacent to the cafe.

As a vegan, some of Raven’s favorite types of food are Thai, Indian and most Asian cuisines. Sushi places usually have a lot of vegan options. At Dragonfly, his favorites are the Korean BBQ tacos and the chickpea burger. “I make them out of chickpeas, brown rice and quinoa, sesame seeds, breaded with panko so it’s crispy on the outside,” he says.

Popular items are the Greek falafel, Korean BBQ tacos, the portobello Philly, the chickpea burger, the Buffalo chickpea and the Buddha bowl. And they don’t only see vegan customers. “It’s about 50/50. We have a lot of people who aren’t vegan, they just like eating healthy,” Raven says.

In the beginning of July, in downtown Ocala, Dragonfly opened a second location which serves mostly raw vegan food, and Aaron plans on adding a breakfast menu as well. A third location is planned for the new Hilton Hotel that’s opening soon in downtown Ocala. “We’ll be the first vegan restaurant in a Hilton in the United States,” Aaron says. 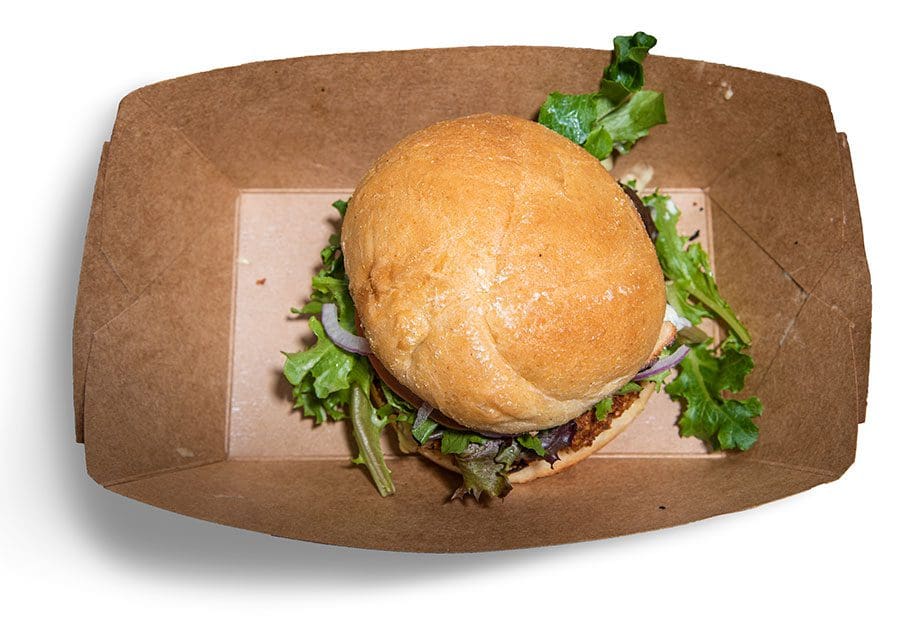