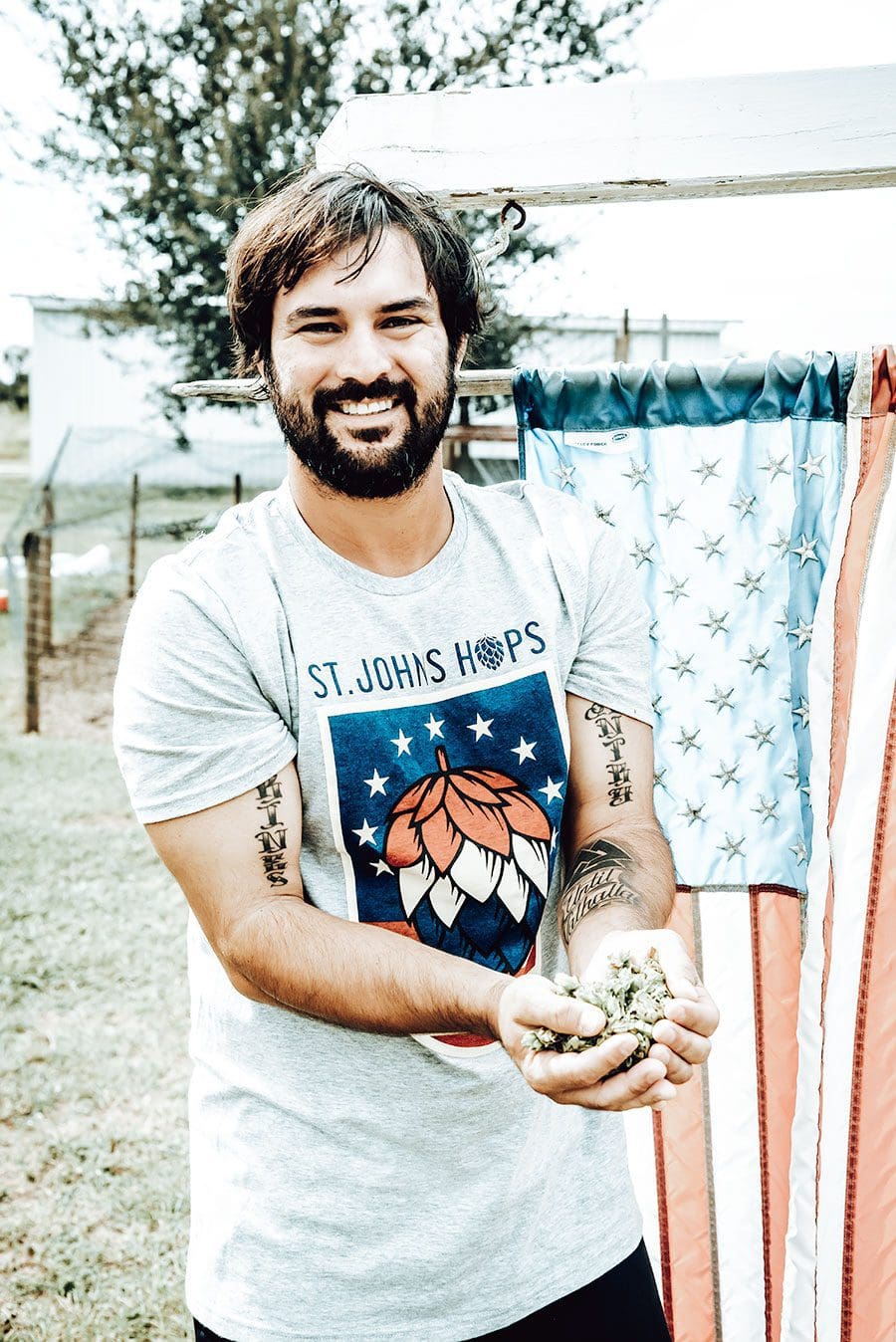 Hands trained to kill have been retrained to save lives.

The hands belong to Sebastien Lajeunesse, a former US Marine point man; a mine-sweeper—the guy Bravo Company followed into Taliban territory… if he didn’t get blown apart.

“Every day on patrol I was in front of the squad with the metal detector,” Sebastien says. “On the first day of the Marja invasion I was on a berm by myself while the rest of the squad was taking cover in case I blew up. I had a squad of Taliban just unload their weapons at me.”

Sebastien did what anyone would do – he dropped to the ground. But he still had to sweep. Lives – American and Afghan – depended on him. Sebastien, who grew up dreaming of being a Marine, was prepared to die for his brothers.

“I turned and saw my best friend start to run up to help me, but our team leader ordered him back,” Sebastien says. “I’m on the ground, just staring at my friend. I’ll never forget the look on his face of pain and sorrow, like ‘I’m sorry bro.’ I crawled and I’m sweeping, with bullets flying past me, inching across the berm, just about exhausted. Finally, I was halfway done, and he decided to go against team leader’s order and gave me covering fire. I definitely don’t think I would be here now if he hadn’t disobeyed the team leader’s order.”

Somehow, Sebastien remained physically intact. That doesn’t mean he returned home whole. “Like a lot of family and loved ones that came back, I never truly came back.” Post Traumatic Stress Disorder (PTSD) followed him back to central Florida.

Sebastien was working a dead-end job with a food distribution company when his father, a former professional hockey player turned entrepreneur, offered a lifeline. “Dad called me up and said, ‘Come work for me part-time and go to school and study,” Sebastien says. “That’s where I discovered my love for horticulture therapy.

Sebastien left part of his inner self in Afghanistan, but found peace, not on a therapist’s couch, but in the arms of nature, among rows of plants.

Sebastien made the life-altering discovery while working for his father’s business, Agro Research International, in Sorrento, which specializes in organic pesticides, herbicides and fertilizers.

“He told his sister, who is a therapist, ‘This is therapy for me. This helps me put Afghanistan behind me,’” recalls Agro Research International CEO Marc Lajeunesse.

“Working on the farm, working with plants and everything has helped me a lot. I’m definitely in a better place. I feel like I was truly blessed to have the opportunity my dad gave me when I got out,” Sebastien says.

“Working for my father, that’s when I realized, ‘Hey, one day it would be cool to have a farm for veterans to work it, a healthy farm where they can practice horticulture,’” Sebastien says.

Sebastien is so sold on horticulture therapy that he started a 15-acre “healing” farm to help other vets find peace.

“I’m just so tired of hearing on the news about the 22 veterans a day committing suicide. It wasn’t bad enough that I lost brothers in Afghanistan fighting, but we lost more after coming back home because of PTSD and committing suicide, and I want to do something to prevent those numbers,” Sebastien says.

Fittingly, he named his healing farm Valhalla. In Norse mythology, Valhalla is the hall of slain warriors, a splendid palace roofed with shields where the warriors live blissfully.”

In mythology, the warriors fight each other for sport. Warriors at the Valhalla at 40923 Maxwell Road in Umatilla, plant and harvest St. Johns Hops (named after the central Florida river), which are sold to central Florida microbreweries.

Today, 32-year-old Sebastien leads battle-scarred veterans, not through booby-trapped desert, but to their very own better place.

“St. Johns Hops is a veterans healing farm, dedicated to hiring combat veterans who suffer from PTSD, to work in this peaceful therapeutic environment,” Sebastien says. “We also help them get on their feet economically.”

“It’s a hard transition coming back from Iraq,” says combat vet Keith Brown, who says he finds comfort “in being around my brothers” among rows of hops at Valhalla.

“We have a couple of success stories. One of my veterans said, ‘When I came back from Iraq, I had anger issues and PTSD. Ever since I started coming here my life’s been so much easier. I’m happy. I feel less stress. I feel less angry,’” Sebastien says.

Sebastien can relate. In seven years, he risked his life during two combat tours of Afghanistan and served as a rifle instructor after being promoted to sergeant.

St. Johns Hops is prospering because Sebastien figured out how to grow hops in Florida’s oppressive climate (hint: he uses his father’s organic products).

“I grew a few hops plants and tried my dad’s products on them to see if they worked.” They did.

“I went to a couple of local breweries to see if they’d buy the hops. They tried it and loved it. I figured, ‘Hey, this is the perfect opportunity to start the healing farm for veterans.”

During months of researching ways to protect hops from bacteria that buried other would-be hops farmers, Sebastien wrestled with another problem – how to help as many veterans as possible. Valhalla isn’t large enough to warrant hiring more than a few vets. He’s never had more than three employees at one time. 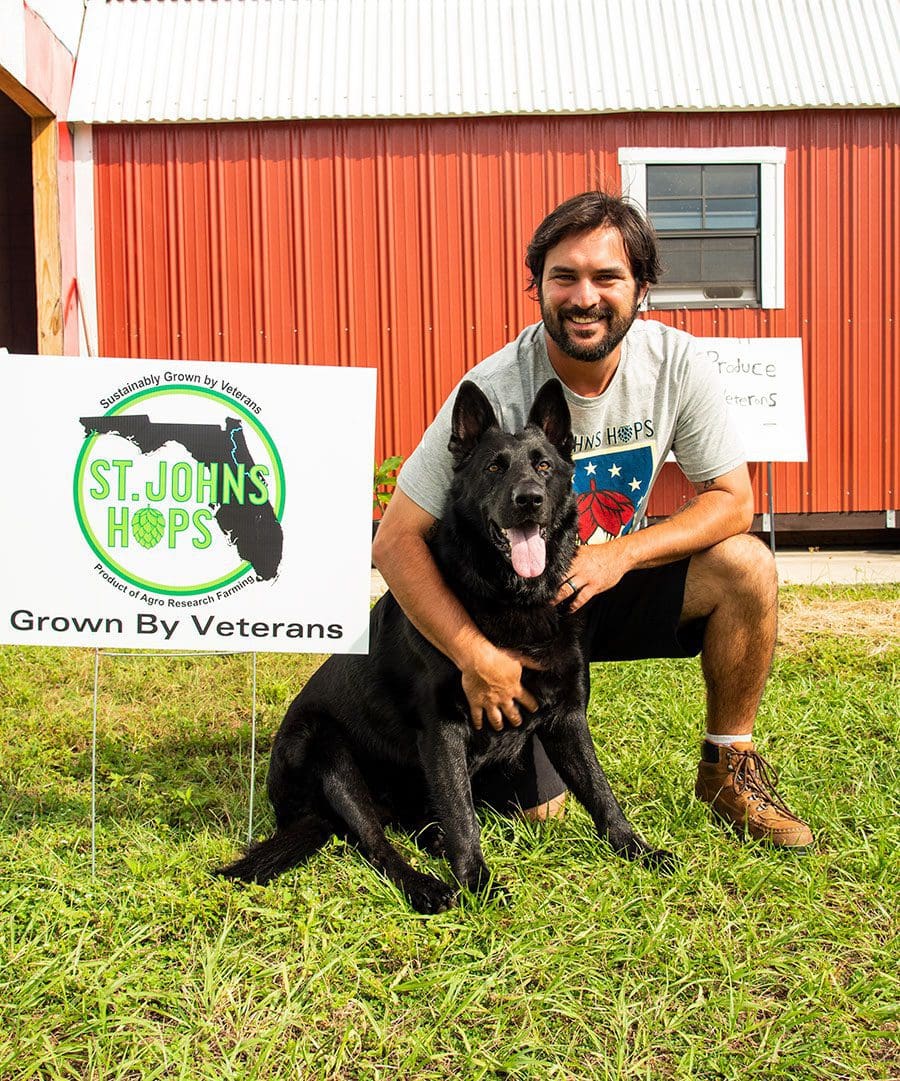 The answer came to him this summer – start a non-profit strawberry patch/farm. “Warriors to Farmers is a brand-new program that I just got my 501(c)3 approved for. All the money that we get from donations will go toward the salaries to hire more combat vets that struggle with PTSD, for them to work in the same farm,” Sebastien says.

If all goes according to plan, Warriors to Farmers will do more than put money in the pockets of veterans. “The jobs will be part-time. The reason they’ll only work part-time is so they’ll have the time they need to go to school and pursue a career,” Sebastien says. “Also, in the program they will get three months of counseling. That’s a brand-new program I’m trying to get off the ground now.”

Strawberries are only part of the grandiose plan.

“We actually are in the process of getting ready to set up a brewery at the farm where we will brew our hops. And one of group workers has actually volunteered to train one of my veterans to be a brew master. So that would be something to add to his resume. He’ll also be making commission from the brewery and everything so he can better himself and his situation.”

“I was really having trouble adjusting back to the civilian life and everything,” Sebastien says. “I was the first client, I guess.”

“I would love to create other branches around the country because American veterans all over are struggling, not just in our little corner of the country,” Sebastien says.

It will take years to fulfill such a dream. If anyone can pull it off, Sebastien can.

“He’s happy, the veterans are happy, and I think he’s touching lives. He found his passion,” Marc says.

Sebastien’s still very much a solider.

“I was lost trying to find my purpose, then I found my calling helping other veterans go forward, Sebastien says. “I feel like I’m still serving my country.”