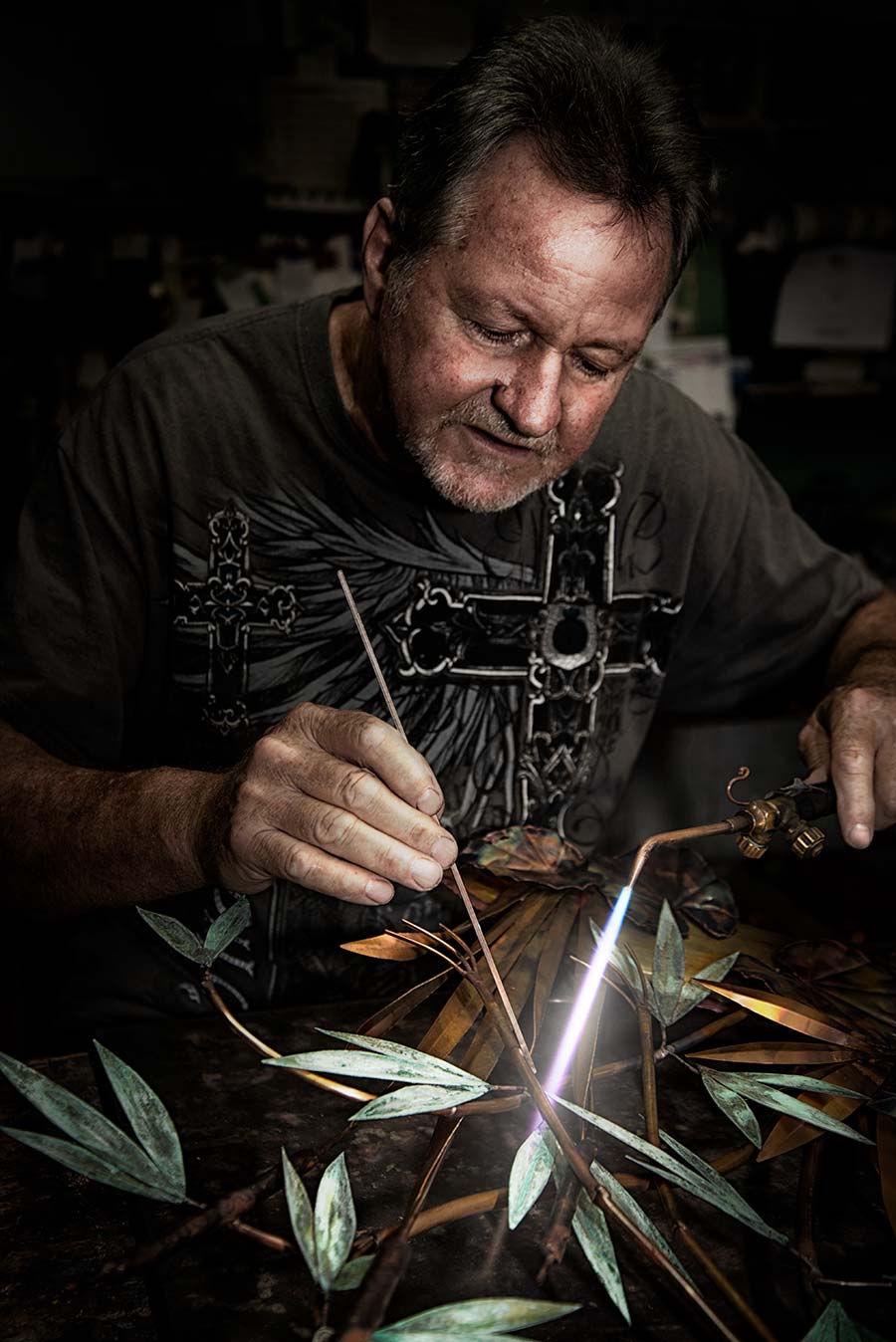 Artist Bill Squires, of Leesburg, uses a torch to create his metalwork, also shown in the photos below. // Photo: Nicole Hamel

Craft festival settles in at Villages’ Pinellas Plaza for a second year.

As a copper sculptor who has traveled all over the country, Bill Squires always adapted his work to wherever he found himself. When he owned a gallery in North Carolina, for example, some of his work featured farmhouses and moonshine stills.

So, naturally, after living in Florida for about 20 years, his metalwork often takes on the shapes of wildlife and fishing towns and ocean scenes.

The Leesburg resident will display his wares at the second annual Pinellas Plaza Craft Festival from 10am-4pm Saturday and Sunday, Sept. 29-30. The plaza is at 2500 Burnsed Blvd., south of County Road 466A and east of Powell Road in The Villages, and the festival will be staged in the grass fields adjacent to CR 466A. Admission is free.

Bill will be one of about 75 to 100 artisans participating in the show, says Elizabeth Dashiell, publicist for the organizer, Howard Alan Events & American Craft Endeavors. They will come from all over the state, including Melbourne, Tampa-St. Pete, Sarasota, and Naples, and even as far as Chicago. 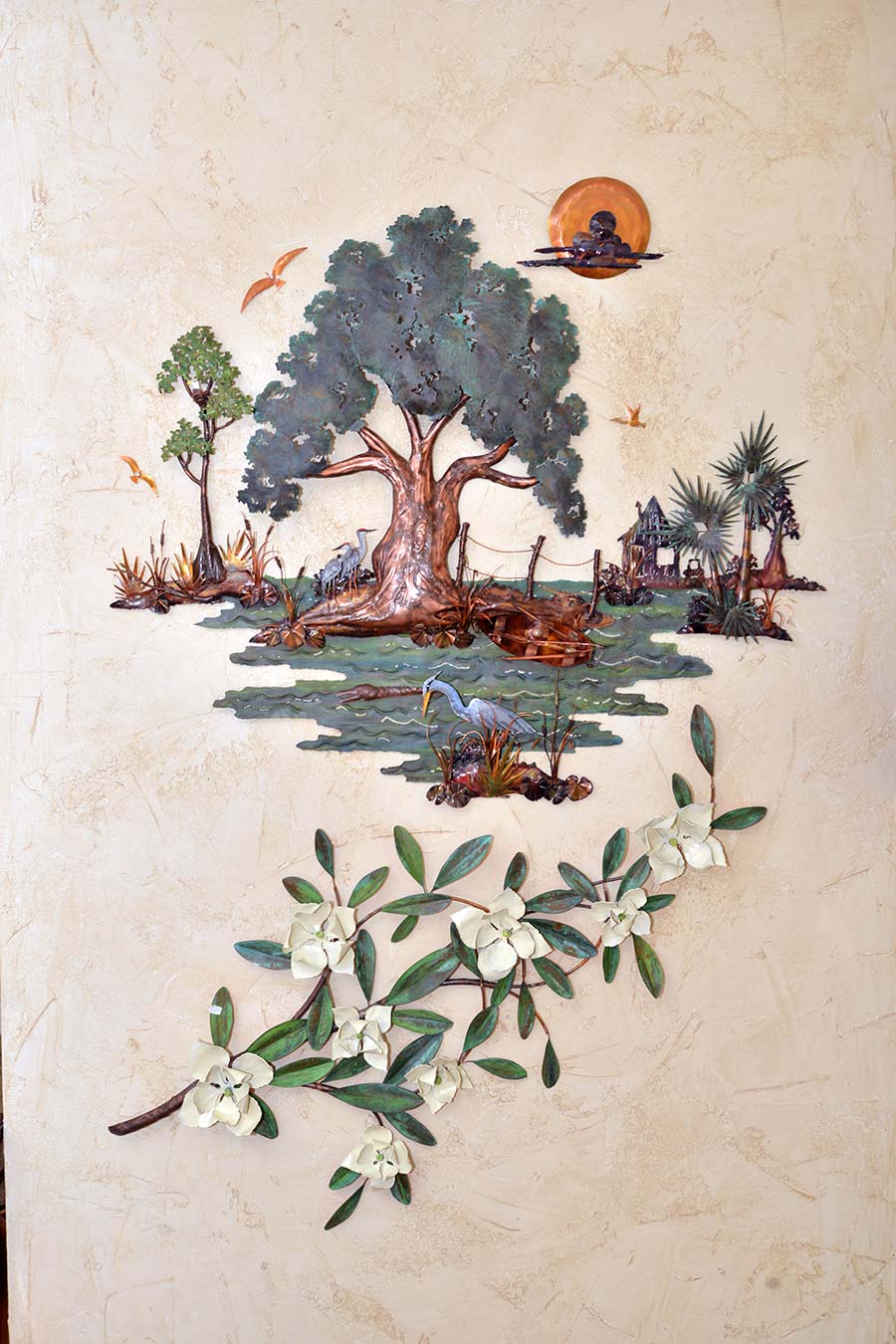 That’s a pretty long reach for a festival in only its second year, but last year’s inaugural event obviously was a success.

“A new show takes at least one or two years usually to get a strong following,” Elizabeth says. “Last year’s show enjoyed a nice turnout.”

Bill wasn’t able to make it to Pinellas Plaza in 2017, but he rarely misses a Villages show. He’s been a professional artist for more than 45 years and toured the top shows in the country from New England to California for much of his career.

He enjoys working with copper because it’s malleable and can be used in a variety of techniques. He can use the heat of an oxygen acetylene torch to vary the color from brass to brilliant red. He also can create different textures with copper and perform intricate detail work, such as the vein of a leaf. In fact, he created the copper tree in the lobby of the Leesburg Public Library, and also has done commissioned work for the lake pavilion in the city of Tavares, where he formerly owned the Copper Heron restaurant/gallery. 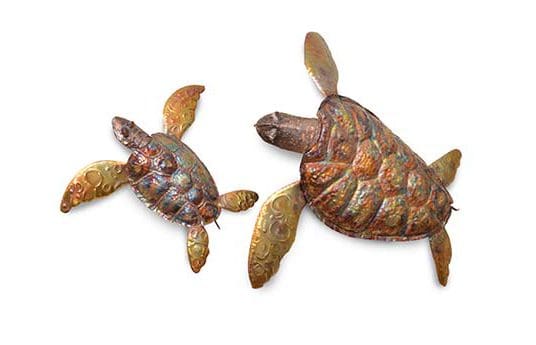 Bill can’t use his torch at the festival, but he will give a presentation and bring along about 50-60 pieces of his work. About 50 percent of his work is commissioned, so he’ll take requests from visitors, something he always enjoys doing for Villagers.

“It’s a fantastic group of people,” Bill says. “All my work are one-off originals, so it’s fun to create for them.”

The Villages also is home to one of the largest Jimmy Buffett Parrot Heads clubs, so Bill soon may find himself designing a Margaritaville bar or some other scene from a Buffett song.

Most of the participating artisans tailor their work for clients, Elizabeth says. For example, Rosemarie Re, owner of Silks in The Villages in Fruitland Park, creates custom silk floral arrangements, including floor plants and trees, orchids, sconces, tropical plants, and designs for mantels and ledges.

“The artisans are there not only to customize but also to speak to visitors and get engaged in what was behind each creation,” Elizabeth says. “It’s a fun, interactive experience.”

In addition to the craft festival, Pinellas Plaza has several retail shops and restaurants, so visitors can make a weekend of shopping and dining, highlighted by the displays from Bill and some of the nation’s other top crafters.

“I look forward to seeing all my clients and I’m excited about what will be requested of me to do,” Bill says.