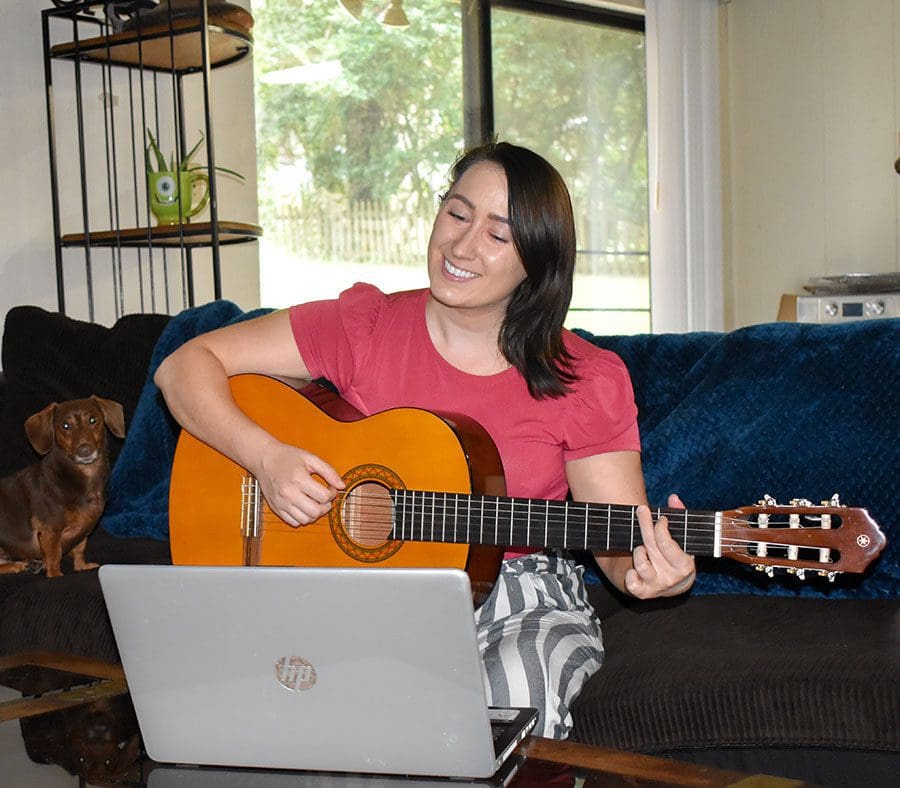 Music can trigger a memory, make you feel better, and serve as entertainment, but it also promotes physical and mental well-being.

The role music plays in healing is still being explored. However, it was first referenced as a therapy as early as 1789 when an article titled, “Music Physically Considered” appeared in Columbian Magazine.

Today, music therapy is widely practiced, and college degrees are available for those who wish to be music therapists. As an established health profession, music is used as therapy to address the physical, emotional, cognitive, and social needs of people by board-certified therapists.

She has worked with clients with diagnosed mental illnesses such as bipolar or personality disorders, children on the autism spectrum or who have ADHD, and those in addiction recovery.

The process begins with an assessment of each patient’s needs. This personalized treatment may include creating, singing, moving to, or listening to music. Music therapy often opens communication for those who find it difficult to express themselves with words. Movement to music strengthens physical abilities. Like most therapeutic work, there is no one-size-fits-all model. It’s essential to know a patient’s needs in order to create an effective treatment plan.

Music therapy moved into the spotlight during Congresswoman Gabby Gifford’s recovery from an assassination attempt in Arizona in 2011. Since the bullet wound affected the left side of her brain, Gabby had aphasia, causing her to struggle to recall words and string words together. However, in music therapy sessions, she sang along quite well to lyrics from one of her favorite musicals, “Annie.”

The brain processes speaking and singing differently. Most language skills come from the left side of the brain, which was where Gabby’s significant injuries were. Music, however, is processed all over the brain, making it easier to recall those skills.

There are those who think playing and music and singing are just “fun,” but perhaps not therapy. However, according to a blog written in April on the AdventHealth website, listening to, singing, or playing music was recommended as good therapy during the coronavirus lockdown. Listening to a favorite music style or to soothing, comforting music can lower stress levels and even blood pressure.

“Music therapy has its challenges, especially now with it being virtual,” Maria says. “I help clients work on controlling impulses and I definitely read body language to do that. I often utilize improvisation with clients like playing music to match their movements. Music is nice to share, but using it to build a relationship with clients is amazing.”

As part of wellness therapy, Maria says she helps clients on the autism spectrum and those in addiction recovery to learn to focus. Being mindful and in the moment or working with self-expression are two tools for these therapies. She may even encourage clients to write songs.

“They need to be mindful of triggers that control their impulses and the people in their support system,” Maria says. “They need to harness a different part of the brain and be self-aware while working toward their goal. It’s not just, ‘I listen to music and I feel better.’”

The same can be said for using music therapy with those who suffer from Alzheimer’s disease and other forms of dementia. Doctors say key brain areas linked to musical memories are not affected by dementia. It’s important to focus on the kind of music the patients enjoy and to be aware if they have a negative response to a particular piece of music. People generally recall their favorite songs from ages 13-16 for men and 11-14 for women. These songs remain in the memory throughout life. 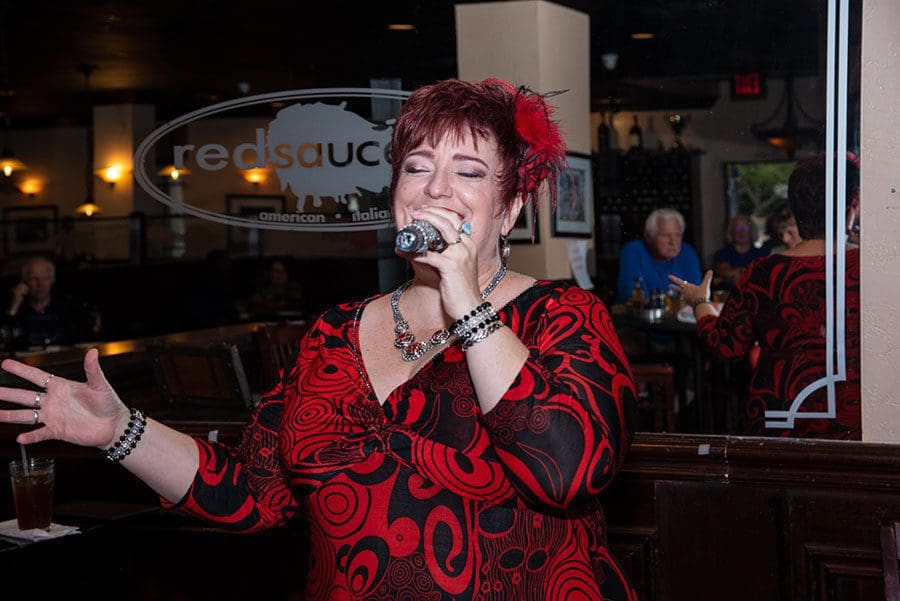 Paula Baker, a local entertainer from Mount Dora, takes great pride in singing for those with cognitive disorders. She has been performing in Central Florida for almost 25 years in independent living and assisted living facilities throughout the area.

“I target my songs for the age group listening, especially for the memory-care patients. Because they don’t lose the music memory, it’s amazing to watch them come alive when they recognize a song,” Paula says. “You can actually see life come into their eyes where they might have been just sitting with no focus.”

Paula’s mother was diagnosed with Alzheimer’s disease, which has given her new insight when performing for those with cognitive issues. She worries about those she has come to know at local facilities who are now in lockdown due to Covid 19.

“I really miss performing, and I’m very concerned about Covid and how this is affecting them,” she says, adding, “I would do sing-along songs and I make an effort to play songs I’m sure they know.”

Paula also takes along small tambourines for those who wish play along with her. “I talk to them before, during, and after my performance, and I try to remember songs they requested during my last visit to play again. I also do things like teaching them to jazz hands [a gesture in which hands are waved rapidly to and fro to express or indicate excitement or triumph] at various points during a song.”

Paula says it’s always delightful when residents get up and dance and enjoy the music fully.

“There’s a woman in a wheelchair at a Lake Harris facility whose body causes her to be completely bent over. During one of my performances, she got so into the music, she sat up straight and was smiling and facing the crowd,” Paula says. “It seemed they enjoyed seeing her come to life more than they enjoyed me, and I loved that.”

“I target my songs for the age group listening, especially for the memory-care patients. Because they don’t lose the music memory, it’s amazing to watch them come alive when they recognize a song” 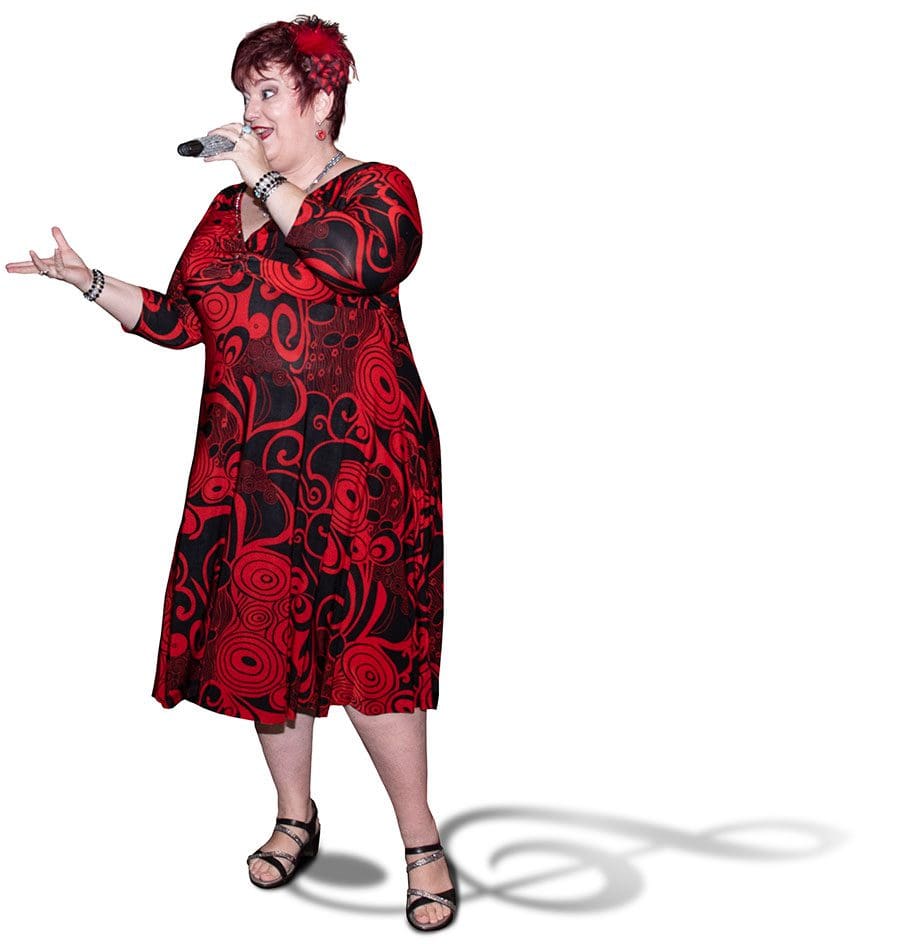 Paula still performs where she can. This includes going to a facility that has a large enough building to allow residents to be socially distant and for Paula to be farther away from them. She has also done outdoor concerts with residents of independent-living residents. “I tell them to stay aware of the heat and go inside immediately if they feel it’s bothering them,” she adds.

Creating interactive performances is a priority for Paula. She plans her repertoire with the intention of her audience being a part of the show and encourages moving around and dancing.

“Music is necessary for humans. There needs to be more music therapy,” Paula says. “Since my mother got Alzheimer’s, it has really made me aware of how vital music is. That’s why I think it’s essential to have the sing-along songs and use the tambourines so they become a part of the music performance and use the cognitive skills still available to them. I love it when they’re dancing, hands are moving, and feet are tapping.”

An article on the website VeryWellHealth.com indicates there are ways to use music through the various stages of Alzheimer’s disease. In fact, there are times music creates a connection with the patient that is often impossible with words alone. The article suggests it could be helpful to create a playlist of favorite songs to use throughout therapy.

Perhaps Plato said it best, “Music gives a soul to the universe, wings to the mind, flight to the imagination, and life
to everything.”