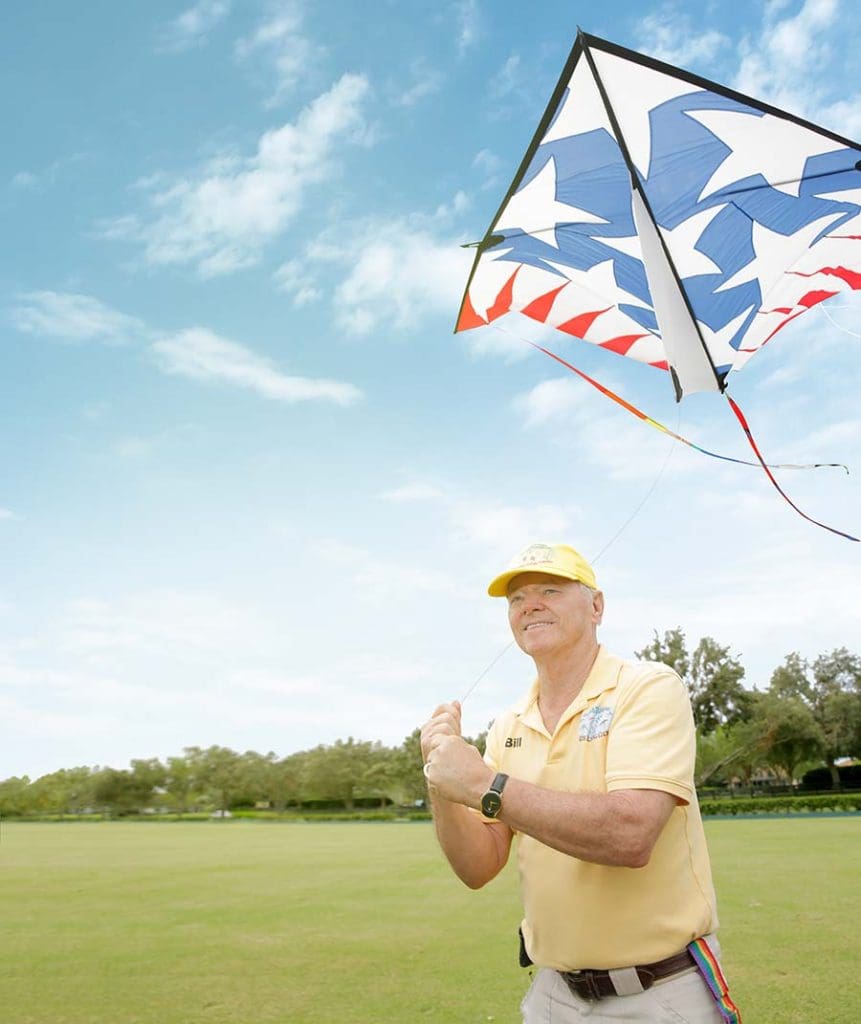 A Villages resident enjoys a hobby that is way over his head.

Bill Eatley is happiest when gentle breezes swirl in the air.

With deft flicks of his wrist, he sends his four-line kite into the air, and after a few tugs, it whirls skyward. His facial expression changes from pure concentration to pure admiration as he watches his agile, colorful kite dance peacefully in the blue Florida sky.

He has certainly come a long way since he was introduced to the hobby.

“I was on vacation in California and saw a bunch of people flying kites at a beach in San Diego. I was awed,” Bill says. “So I purchased a kite after returning to Florida. The guy where I purchased the kite gave lessons, but there was no wind on the day I was supposed to have my first lesson. So he had me get in a vehicle with a sunroof and he drove while I tried to fly the kite through the sunroof. I kept crashing the kite.”

However, he quickly got the hang of controlling and maneuvering all types of kites. Those include a single-line kite, which is ideal for beginners; a single-line fighter kite, known for its agility and maneuverability; and two- or four-line stunt kites, which are famous for their acrobatic stunts, loops, and dives.

Put several of them in the sky at once and they become quite a spectacle. When club members gather to fly, kites of all shapes and sizes fill the air with their vibrant colors.

“When people think of kites, they automatically picture a diamond-shaped kite,” says Bill, who also flies at Clearwater Beach and Treasure Island in Tampa. “However, members of our club have square kites, triangle kites, and rectangular kites. They also have kites of different styles, including a Navy jet fighter kite and a sailing ship kite. I want a kite with a skeleton riding a bicycle but haven’t been able to find one yet.”

Of course, Bill and other club members are not the only ones who enjoy the hobby. Sometimes they bring their grandchildren to partake in the fun.

“The kids don’t even need wind because they just run with the kite,” he says. “They’re feeling kind of exhausted by the time they are done and end up going to sleep when they get home.”