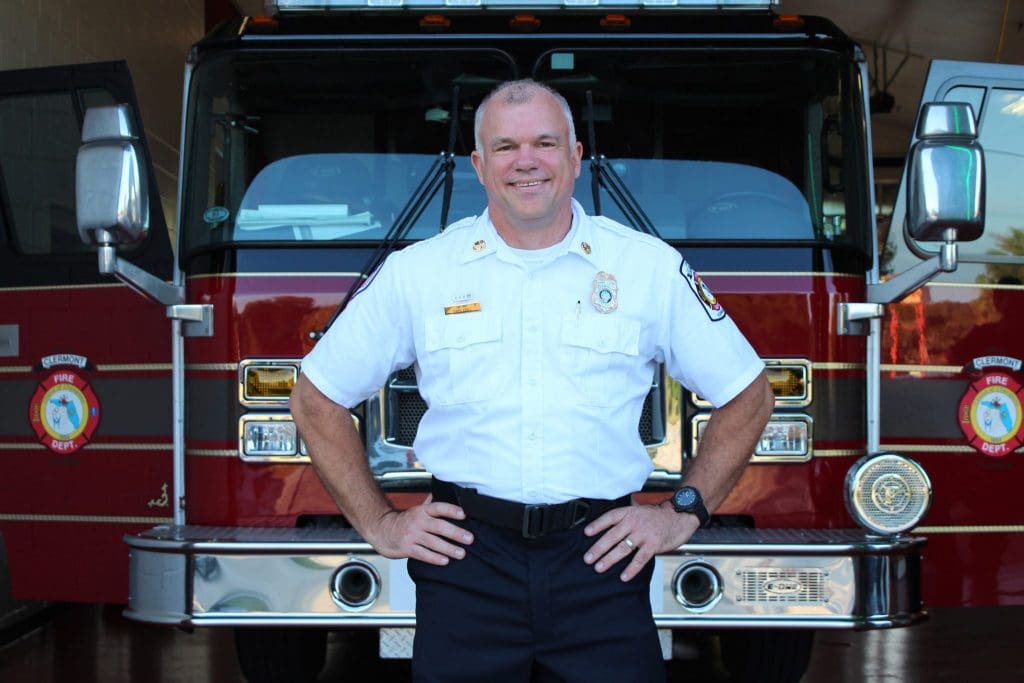 An official change of command in the Clermont Fire Department will take place Friday when David Ezell takes over for Carle Bishop, who is retiring as the city’s longest-tenured volunteer-turned-employee of 49 years.

The induction ceremony is scheduled for 10am Friday, Oct. 18, in the City Hall Council Chambers, 685 W. Montrose St., according to a news release. The public is invited.

David, who spent the past 25 years serving his hometown of Bradenton, says accepting the offer to work for the city of Clermont was an obvious choice.

“This is my dream job,” he says in the release. “It just felt right.”

David says he was impressed with City Manager Darren Gray’s leadership, including rebranding the city, and he was wowed by Clermont Fire Department’s accomplishments, having achieved international accreditation and an ISO 2 rating.

“Chief Bishop has done a masterful job of turning a volunteer agency into a gold standard fire department,” he says. “And meeting Darren sealed the deal for me.”

David steadily rose through the ranks of the Bradenton Fire Department since 1994, being promoted to charge emergency medical technician in 1997, lieutenant in 2001, deputy chief in 2005 and assistant fire chief in 2011.

During his time with Bradenton, he redesigned the department’s computer systems, negotiated union contracts on both sides of the bargaining table and volunteered as a board member for an organization that trains leaders in the public safety community. His greatest accomplishment was drastically reducing turnover at the Bradenton agency.

“I helped shape the direction of the department,” David says. “It went from being a revolving door to a destination department.”

His desire to advance to chief led to his recent job search.

“I’ve been ready for the job for quite a while, and with my former agency, the timing wasn’t there,” he says.

Out of high school, David enlisted in the U.S. Navy to become a SEAL. However, a devastating glacier-climbing accident took his military career off the table. He discovered his love of swimming during rehabilitation and has since become a marathon swimmer, the release states.

Regrouping after his accident, he studied engineering at the University of Florida and worked for a manufacturing company in Ocala. He also started a side business building networks and custom workstations for small businesses.

A friend kept inviting David to check out firefighting, and once he did, there was no turning back. He has found deep satisfaction in the field.

“We are there to help people during their worst times,” he says. “You train and learn as much as you can, and then on scene, you work with the tools and knowledge that you have to get the best outcome.”

During his first year as chief, David plans to get to know the department and evaluate resources and needs. He plans to start quarterly organizational meetings with open participation. He’ll evaluate personnel, stations and equipment as he seeks to maintain the department’s international accreditation and high ISO rating.

He also sees an opportunity to increase public outreach and expand the focus from fire prevention to community risk reduction.

“I see a lot of challenges ahead,” David says. “There’s going to have to be some smart growth here, but I’m a good planner. I’m always looking five to 10 years down the road.”

He also revealed something about his leadership style.

“I mentored under transformational leaders,” he says. “I’m big on empowering people to go out and do great things. My job is to develop the people here. If I can make someone better than me, then I did what I came to do.” 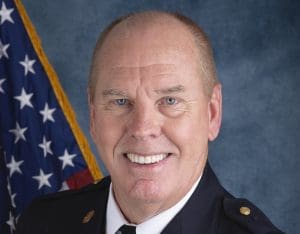 The city recently honored Carle Bishop for his 49 years of service.

“Chief Bishop has been an invaluable leader for the Clermont Fire Department during a half-century of growth and change in the city,” Darren Gray says in a news release. “He has transformed our fire department into one of the most respected departments in the state. He will be greatly missed, and we wish him all the best in his well-deserved retirement.”

Carle’s most notable accomplishments include growing an all-volunteer department into a career agency of about 90 employees, achieving international accreditation and lowering the ISO Public Protection Class rating three times, to Class 2.

“I’m proud to have been a part of it all,” Carle says. “There’s been a lot of growth with personnel and within the community. I’m pleased with the Clermont Fire Department’s continued professionalism and all that we’ve accomplished together.”

The Clermont Fire Department started with all volunteers in 1923, seven years after the city was incorporated. Carle joined in 1970 and became chief in 1990, and the department became a paid career department in 1999.

“I hope I will be remembered as being fair and consistent in my dealings with others,” Carle says. “Every day, I tried to do what seemed right.”