Boaters will soon enjoy a bigger, better boat ramp in Clermont. The city of Clermont invites the public to the ribbon cutting for the new boat ramp at 10am Friday, Jan. 10, at 140 East Ave., along the southern bank of Lake Minneola, just east of Waterfront Park.

The project cost $2.49 million and is part of the city’s $22 million Downtown-Waterfront Master Plan that the City Council passed in 2015 to enhance and bring more life to the area, according to a press release. 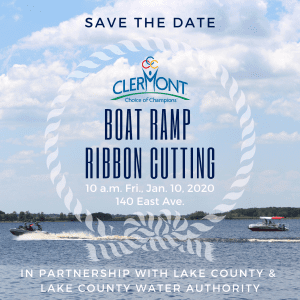 “With each master plan project completed, we are excited to bring the community’s vision into reality,” City Manager Darren Gray says. “The new boat ramp will be a great asset to our waterfront.”

Lake County contributed $750,000 to the project utilizing tourism development tax dollars, and Lake County Water Authority contributed an additional $250,000. The remainder is being funded through the city’s portion of the Infrastructure Sales Tax, also known as the Penny Sales Tax.

The former boat ramp site will become an extension of Victory Pointe. The new boat ramp has double the launch pads, increased parking, 10 mooring slips (as opposed to none) and new restrooms. The extensive project included multiple surveys, underground utility work and coordination with county, state and federal agencies. Construction was completed in just six months.

For safety, a portion of the South Lake Trail was rerouted south of the site, and a separate turn lane was added from East Avenue into the parking lot.

The new location was chosen based on valuable feedback from key community groups.

“By having dialogue and making the community a part of the plan, that’s how we were successful,” Darren says. “We listened.”