The City of Clermont’s finance director, Joe Van Zile, is set to retire this month after 34 years of service, according to a press release. Van Zile was recognized by the city manager, mayor and council during the Dec. 10 council meeting in City Hall.

“Mr. Van Zile certainly has been a wonderful financial leader for this city,” said Mayor Gail Ash. “He will truly be missed. We wish him well in his retirement.” 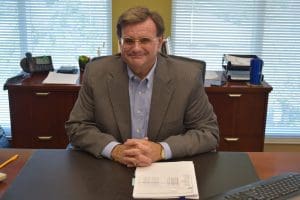 Van Zile kept Clermont’s tax rate the lowest among Central Florida, earned the Certificate of Achievement for Financial Reporting for 31 consecutive years, and oversaw the financing of more than $65 million of loans. He managed an annual budget that has grown from $1.4 million in 1985 to $148.3 million in Lake County’s largest city.

“Joe has demonstrated strong financial leadership and guidance during a time of tremendous growth for the City of Clermont,” said City Manager Darren Gray. “His expertise has been invaluable in providing exceptional services to the Clermont community.”

Van Zile managed the city’s funds during the launch of the Master Plan projects, the construction of City Hall, Fire Station No. 1 and a new police headquarters, as well as the purchase of the Clermont Arts and Recreation Center and the expansion of the wastewater treatment plant, all while seeking out substantial savings along the way. Van Zile managed the refinancing of five loans that saved residents about $2.2 million, and converted the employee group medical insurance plan to a self-funded plan, saving the city and its employees about $1.5 million.

Looking into the future, Van Zile plans to travel the country in his RV with his wife of 41 years, Nancy, and to spend time with his children and grandchildren. “I’ll miss the people the most — my staff and those in other city departments I’ve had the privilege of working with,” Van Zile said.