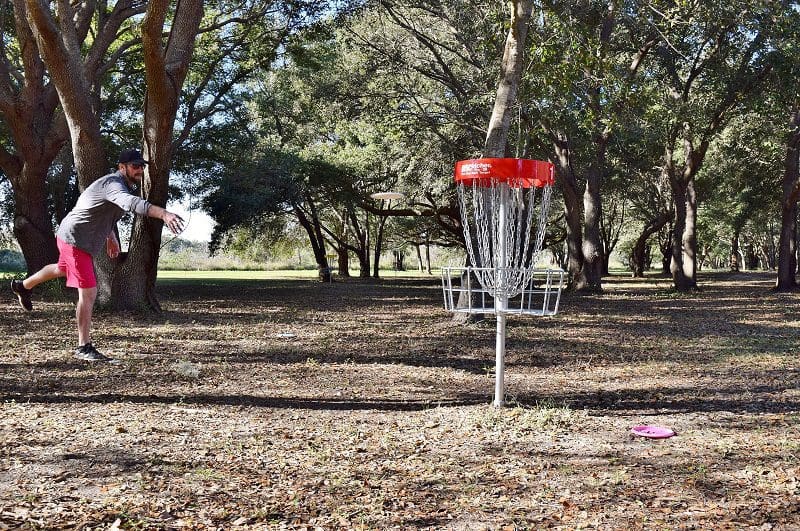 The City of Clermont’s disc golf course recently ranked among the top 100 in the world.
Champions Pointe Disc Golf Course was rated No. 90 by disc golfers on the app UDisc. The company released the 2021 list today on its blog, Release Point. UDisc’s directory includes over 11,000 disc golf courses with over 2 million ratings from disc golfers.
“This recognition is another exciting honor for the Choice of Champions,” says Interim City Manager Susan Dauderis. “We thank everyone who rated our picturesque disc golf course so highly. It’s a unique amenity that we are happy to offer to residents and visitors alike.”
Clermont’s course was the only course in central Florida to make the list, and one of just three courses in the state. (A course in Tallahassee ranked 61 and a course in Jacksonville ranked 95.) Clermont’s course received a grade of 91.17 out of 100 based on 1,018 ratings on UDisc.
“Champions Pointe is one of the longest, most beautiful and well-maintained courses in Florida,” City of Clermont Parks and Recreation Director Scott Davidoff says. “I would encourage everyone from beginners to experts to enjoy this amazing facility.”
The city’s 18-hole course opened in 2016 at 450 N. Lake Minneola Shores, inside Lake Hiawatha Preserve, a 220-acre park with an abundance of oak trees and containing several walking paths around the course’s perimeter.
“I’d give this place more than 5 stars if I could, nicest course I’ve ever played, the scenery was awesome,” disc golfer coleyb wrote Feb. 4 in his 5-star review on UDisc. “The signage and tee boxes were perfect. Some super long par 5’s and even some fun and tight par 3’s on the back. Definitely be coming back!”
Champions Pointe is part of the Lake County Disc Golf Trail and was created in partnership with Lake County and the Florida Disc Golf Foundation.
Multiple local and regional tournaments have been held at Clermont’s course, and thousands of players frequent it each year, including world and national champions.
“Champions Pointe rewards well-executed throws,” said Gregg Hosfeld, course designer and world champion disc golfer. “The 220 acres of live oak are a course designer’s dream; the majestic oak trees create great lines and arches for the fairways.”
Hosfeld also pointed out that the course is well manicured and the dual tees and baskets cater to a variety of skill sets and different ways to play each time.
Champions Pointe was selected to host the upcoming Professional Disc Golf Association’s 2021 Amateur Disc Golf World Championships; tournaments like this provide a welcome boost to the local economy.
View UDisc’s World’s Best Disc Golf Courses 2021 list and announcement at bit.ly/Top100DiscGolf2021.