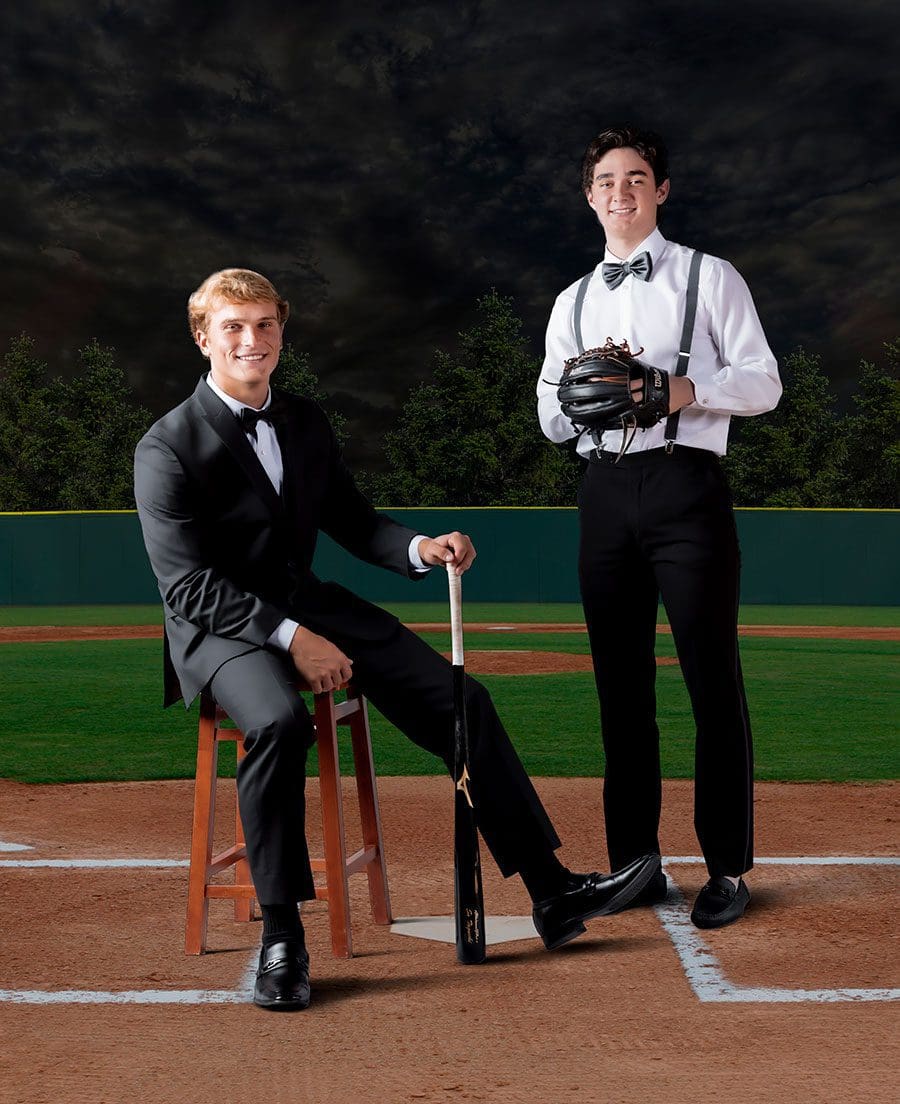 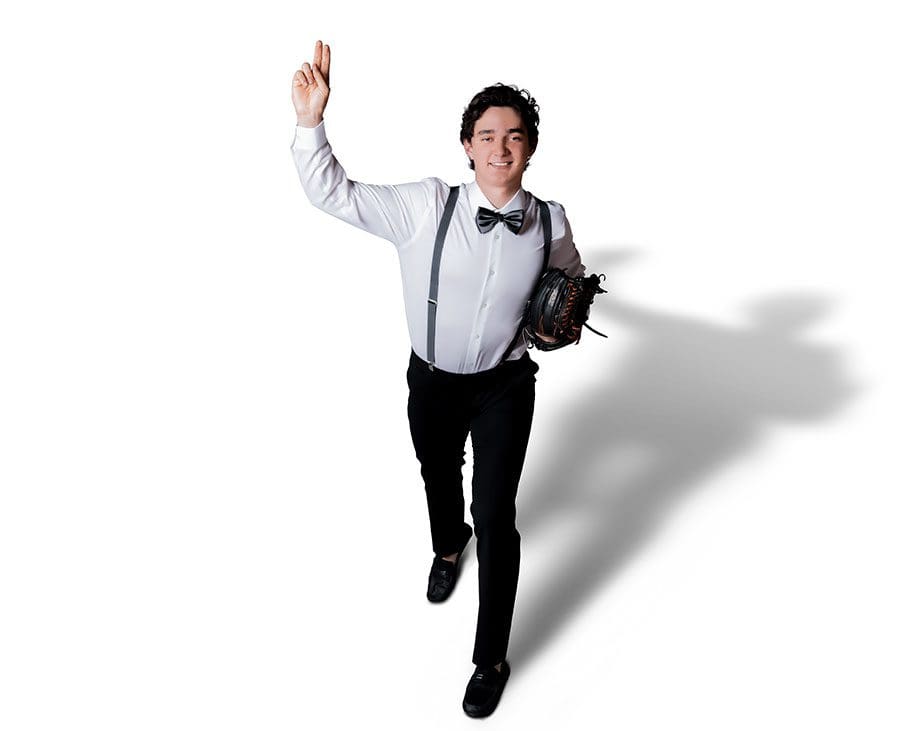 Call Shawn Guilliams’ 94 mph fastball what you will. It just may earn The Villages High School star pitcher an opportunity to one day fulfill his dream of playing in the Major Leagues.

That dream was temporarily put on hold after he went undrafted in the 2020 MLB Draft. His family, friends and coaches gathered at the La Hacienda Recreation Center on June 11 for a draft party. He would have been the first baseball player from The Villages Charter High School to be drafted.

But it’s only a minor setback for Shawn, who just turned 18 and has unlimited upside. Now, he’ll play baseball for three years at the University of North Florida, where he’ll hone his pitching skills and focus on being selected in the first round of the 2023 MLB Draft.

“I’m going to continue working hard and pushing myself to reach my goal,” he says.

Shawn burst onto the scene of top high school prospects when he transitioned from shortstop to pitcher before the beginning of his junior season. Since then, he has been lighting up radar guns with his fiery fastball. In fact, he led The Villages High School to the Class 5A, Region 2 baseball final in 2019.

“I chose the University of North Florida because it felt like home,” he says. “I loved both the campus and the area.”

In February 2020, he attended the Super 60, an event in Chicago where top high school prospects from around the country are evaluated by major league scouts. Shawn was whipping his fastball at 94 mph and also featured a wicked curveball.

“I felt like I showcased myself well at the Super 60,” Shawn says.

Scouts were impressed. Several weeks later, 17 of them showed up to Shawn’s first game of his senior season and used a radar gun to measure the speed of his pitches.

For Brady Bogart, head baseball coach of The Villages Charter High School, seeing Shawn transition from an undersized freshman into an ace pitcher has been a joy.

“His story is very special,” Brady says. “He came into our program standing 5 feet 9 inches tall and weighing 125 pounds soaking wet. He didn’t have all the tools, size and speed of some kids. However, his work ethic during the past several years has been tremendous, and he’s passionate about the game of baseball. He has shot up to 6 feet 1 inch and now weighs 180 pounds. He’s a fantastic baseball player and an even better person.” 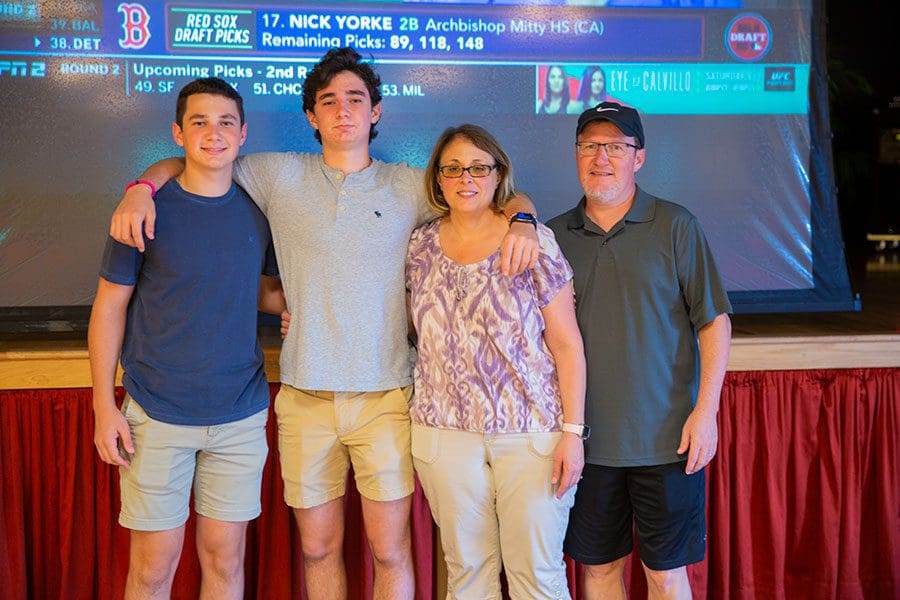 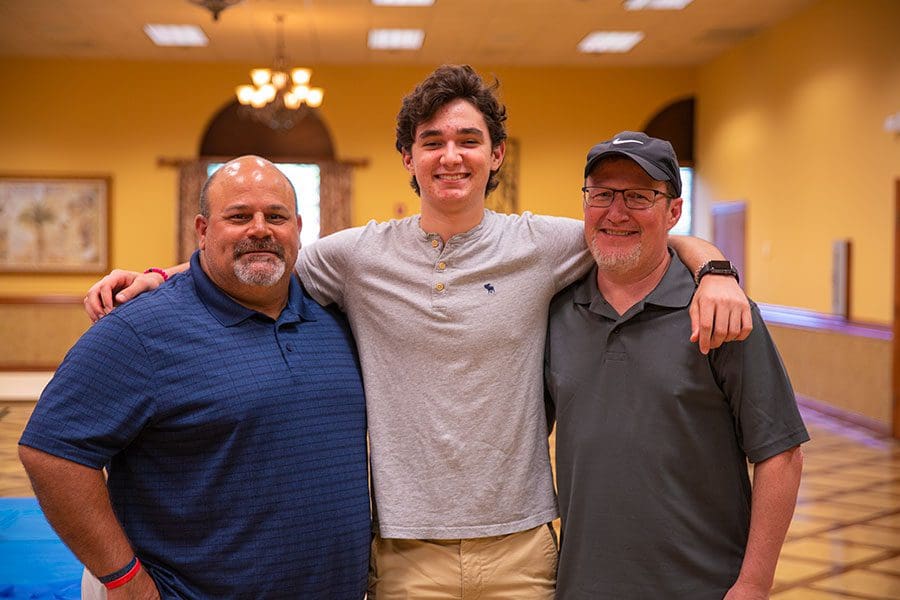 Shawn up close and personal:

Dream team to play for: I would be happy to get a chance to play for anybody, but growing up I was a Cincinnati Reds fan.

Greatest strength as a baseball player: I have a lot of upside and a lot of room to get better. That potential growth is attractive to scouts.

Weaknesses in your game you can improve upon: My changeup. I don’t have to throw many changeups in high school because I can throw a fastball 94 mph. I’ll get better as I continue practicing my changeup.

Favorite professional baseball player: Walker Buehler, a pitcher for the Los Angeles Dodgers. I love the energy he brings to the game, and he’s super fun to watch.

Effect of coronavirus on your game: If the season would have continued, more teams would have been interested and I’d be looking at getting drafted higher.

Personal exercise regimen: I lift weights and throw the baseball every day.

Favorite healthy foods: I eat four healthy meals a day and many healthy snacks. At the beginning of last school year, I weighed 155 pounds. I’ve bulked up to 180 pounds. I eat lots of protein, including bacon and sausage in the morning and chicken and steak at night.

Happiest baseball moment: During my junior year, my brother, Michael, got moved up to varsity and played catcher. I was starting pitcher that night and ended up throwing a no-hitter. That was pretty special.

Most disappointing baseball moment: During my junior year, we faced Bishop Moore in the Class 5A, Region 2 baseball final. We went into extra innings, and in the bottom of the ninth Bishop Moore hit a walk-off homerun to win the game. That was heartbreaking.

Hobbies outside of baseball: I like to golf. I also have annual passes to Universal Studios and visit frequently.

Biggest influence in life: My father, Brian. He always taught me to work as hard as you can to achieve your goals and never back down to anybody.

Guilty pleasure: Pizza. I eat a little too much of it. I also tend to be a late-night snacker.

Pets: I have three cats.

Career aspirations if baseball doesn’t pan out: I’d like to be a sports agent or have a position in sports management. 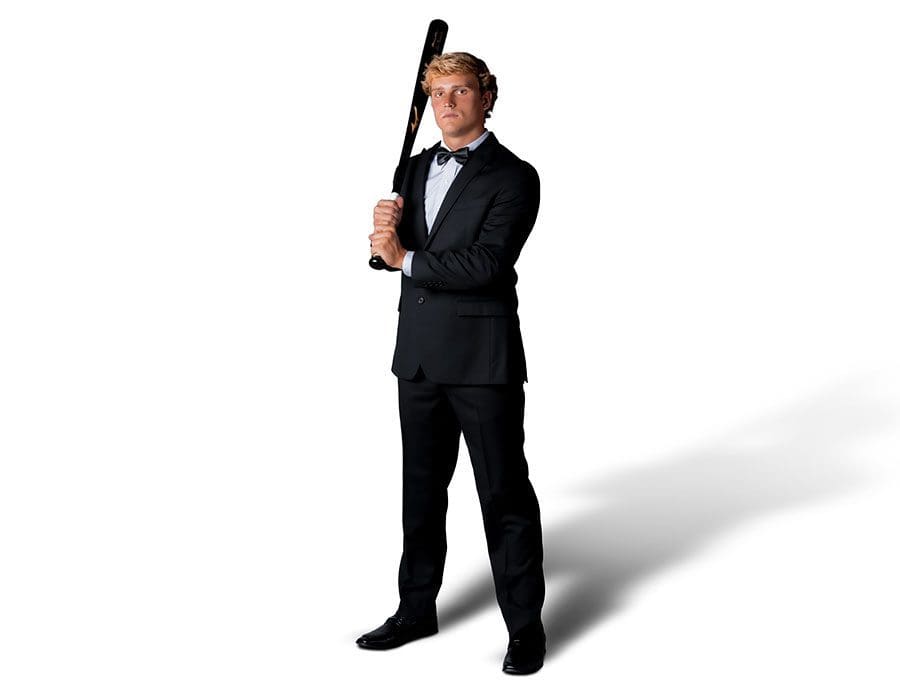 Florida State University advanced to the College World Series in 2019, and the Seminoles look to be even stronger this year with the addition of South Lake High School baseball player Anthony Shaver.

Anthony, a 6-foot 1-inch outfielder, possesses a rare combination of speed and power. He runs a 60-yard dash in 6.45 and the power hitter can easily belt a ball out of any park. He was listed among Baseball Factory’s Top 100 high school players in 2020.

He thought there was an outside shot at being drafted in the 2020 MLB Draft, but it didn’t happen. Still, he is preparing for his upcoming season at FSU.

“I’ve been counting down the days since the beginning of high school season. It’s very exciting and I’ve been staying busy with hitting and all that stuff, trying to prepare for anything special to happen.” 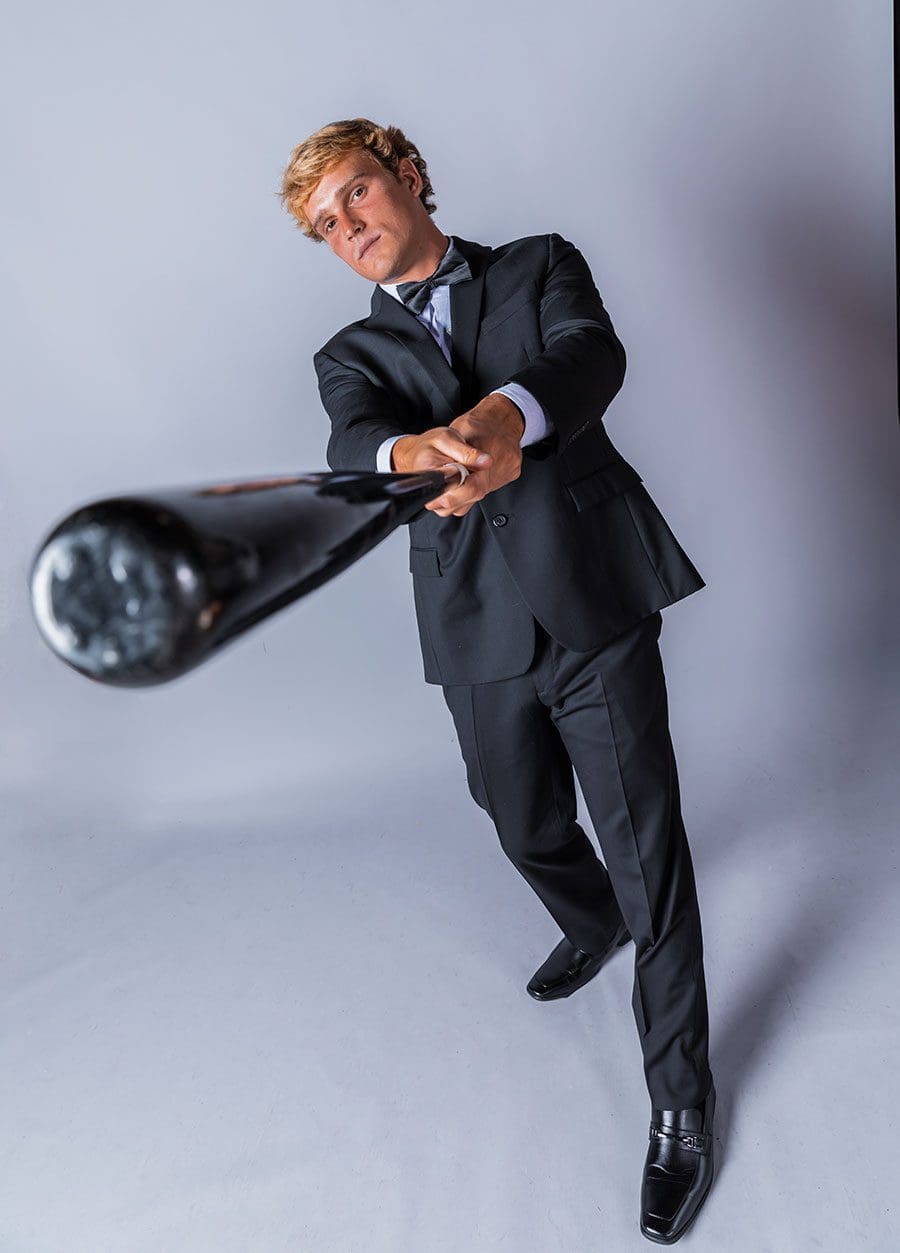 Anthony up close and personal:

Dream team to play for: I would like to stay local so my family can be closer to me, either to come watch a game, or just to hang out.

Greatest strength as a baseball player: I’m a good team player. I’m not going to put somebody down; I’m going to try to get the best out of all my teammates. Physically, I believe I’m a strong power hitter with speed. It’s a combo that not many people have.

Weaknesses in your game you can improve upon: I believe everybody can improve in something, no matter how good you are. Nobody is perfect. I believe my biggest weakness is probably technical action or just timing, and that’s pretty much it, offensively.

Positions you’ve played: My main position is outfield, but I catch in high school.

Favorite professional baseball team: I really don’t favor any team. I just like the good players and that’s really what I like to see and those that have a good personality.

Effect of coronavirus on your game: Not being able to pitch as often. The season was cut short, but nothing really kept me from working hard to be a better player.

Personal exercise regimen: When the gyms opened up, I started going back to the gym and usually go to Ocoee and do batting practices.

Favorite healthy foods: I enjoy eating salads. Every time I go out to restaurants, I’ll look at the salads just because I feel like I play better whenever I am eating that type of food. I always feel like the day before (a game) I’m eating healthier and staying away from junk food. It just improves my game.

Happiest baseball moment: Probably when I was 12 and we made it to the Dixie World Series, when nobody thought our league had a chance.

Hobbies outside of baseball: I like being on the lake a lot and doing water sports; hanging out with friends; and I was on a bowling team in high school.

Biggest influence in life: Definitely both of my parents, Tony and Tricia Shave. My dad for baseball because he played in the minor leagues as a baseball player and he’s been able to help me out throughout my whole life and before I started playing. And my mom, school-wise, she has always kept me on track and always told me to keep my head straight and that kind of stuff.

Career aspiration if baseball doesn’t pan out: Physical therapy or something including math.