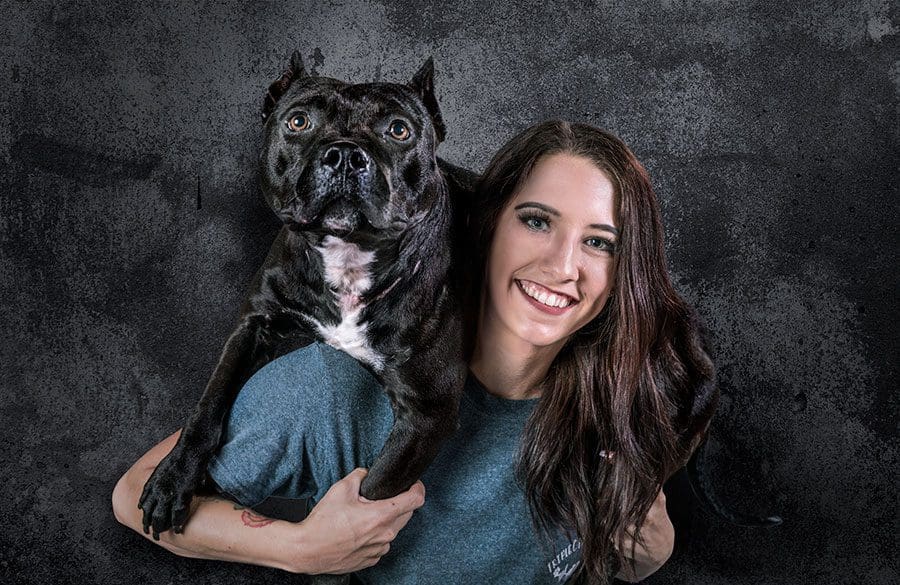 Pit bulls make up about 80 percent of dogs in shelters in Central Florida. Unfortunately, they get put down a lot quicker than other dogs and are the least likely to get adopted. Basically, pit bulls are overbred and overpopulated. There are more pit bulls than people who want them.

That’s why Chelsea Mudd began Triple C Pitbull Rescue in Dunnellon. Plus, she grew up a dog-lover – more specifically, a pit bull lover. Chelsea received her first pit bull for Christmas when she was 18, when she and her sister each got a pit bull puppy from the same litter. Chelsea’s dog Diamond, now almost 7 years old, has been with her ever since.

Chelsea worked her way up to tech in two years at Northgate Animal Clinic in Leesburg, just based on experience. She still works at the clinic part-time, but the bulk of her time is dedicated to her one-and-a-half-year-old daughter and to the dogs Chelsea fosters. 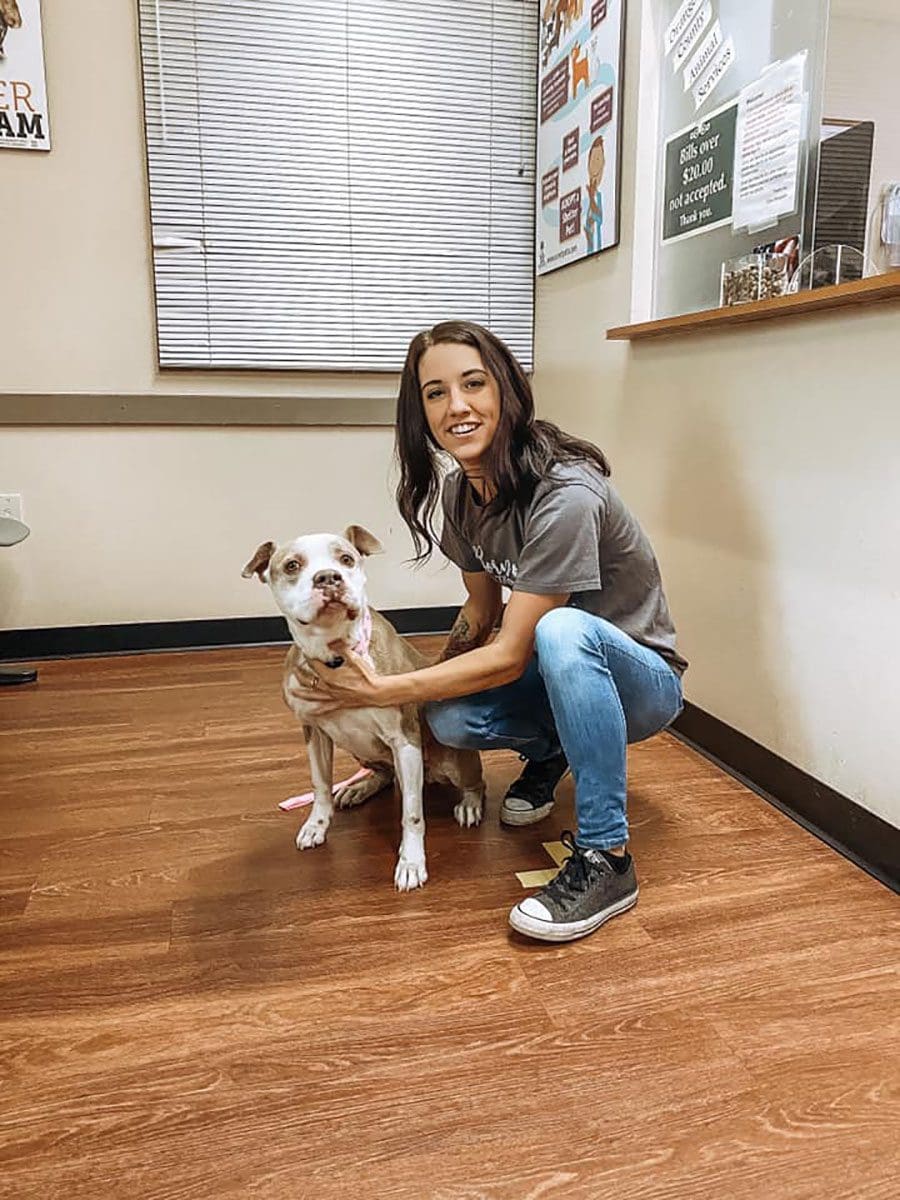 “I had a friend reach out to me… Her dog went missing, a pit bull-boxer mix. The dog was gone for two months and she had signed the lease to go into her new house that didn’t allow pets. Well, the day after they signed the lease, the dog came home. So, she reached out to me and was like ‘Can you help me?’ And that’s really what flipped the switch for me. I took her in, and I got her adopted and I was like, ‘You know what? This is what I wanna do,’” Chelsea recalls.

That is how Triple C Pitbull Rescue came to be. The rescue is not yet a nonprofit, but Chelsea has applied for a 501c3 and hopes to have it by the end of the year. Now, the rescue takes in stray, neglected or abused dogs, or dogs from shelters that are a high-kill risk. They take in owner surrenders occasionally, but don’t always have available space for the extra dogs. Unfortunately, there are a lot of high-kill shelters in the area, so dogs from those facilities are Chelsea’s first priority.

There are currently 16 dogs in her rescue. One of them is at a foster home but the other 15 live in Chelsea’s home. “We have a few extra bedrooms so the dogs can spread out, and then we have five dogs of our own,” she says. All the rescues are pit bulls, and Chelsea’s own dogs are pit bulls or mixes.

When Triple C takes in a dog, the main goal is to get him or her healthy, to the vet, up to date on vaccines, spayed or neutered, microchipped, and then adopted. The whole process takes place with each dog, including training, and then the adoption application has to be approved by Chelsea. As of now, the rescue has saved almost 25 dogs since Chelsea started Triple C in April.

“I wasn’t really a fan of them until I had one myself, so I think that’s a lot of what it is. People hear ‘Oh, they’re so aggressive’ and they don’t really know about the breed or have never experienced having one themselves,” Chelsea says.

“They’re very misunderstood, that is very clear. It’s all about how they’re raised, in my opinion. I’ve taken in dogs that can’t be helped, you can’t save them all, unfortunately. But nine times out of 10 with the proper rehabilitation and patience, time and care, they can and will be very good household pets for kids and adults,” she says.

Everyone should do research before adopting any breed of dog. Reading up on the breed, Chelsea learned that pit bulls can be stubborn, so she’s always been very stern with them. Being stern and letting them know that you are boss is the best thing, she says.

Triple C doesn’t have a trainer; Chelsea works with all of the dogs personally. “They all know how to sit, stay, lay, speak, roll over, play dead, so I’m pretty good at the whole training thing and we’ve been doing pretty good with that so far,” Chelsea says.

What does a day in the life look like for Chelsea at her pit bull rescue? First, when her daughter is up, everyone’s up. The dogs go in and out constantly as she feeds the baby and the dogs. “Most of them are pretty good with her,” she adds. Pit bulls can be kid-friendly pets when trained properly. “We try to only bring in dogs that are kid-friendly because we do have a daughter, but there are just some that take a little time to adjust before we do interactions with our kid.” The rest of the day consists of cleaning dogs, feedings, baths, toenail trims, vaccinations, and anything else Chelsea can do at home like socialization and training sessions with them.

As for the adoption process, meet-and-greets take place at Chelsea’s home. You’ll schedule an appointment to go over requirements and paperwork and meet the dogs. “If it’s a puppy I don’t mind people choosing the dog before they come because puppies can usually adjust to pretty much anything. But when it comes to older dogs, you can’t just pick one you like. I like to make sure that the dog is a good fit for the family,” Chelsea says. 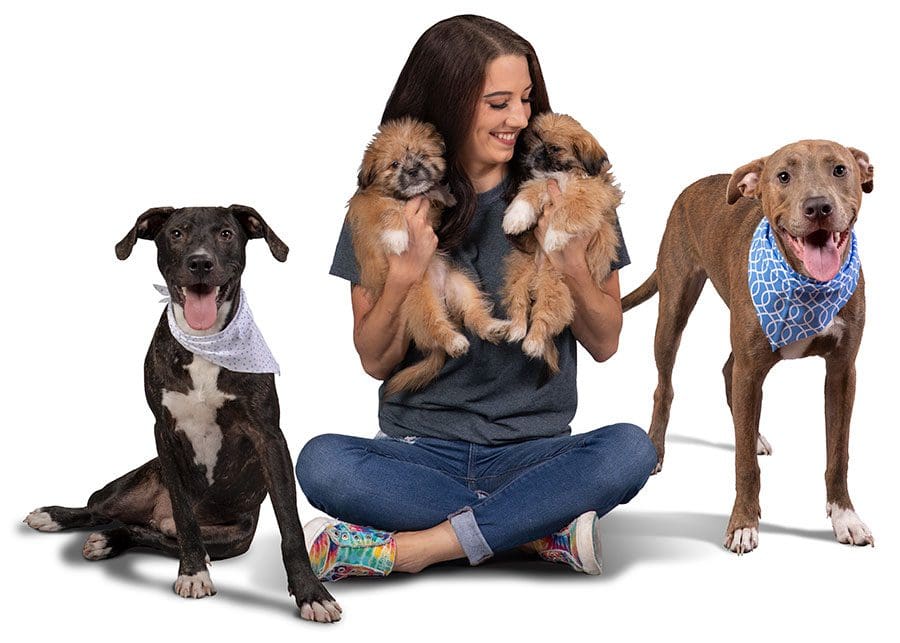 It’s important each dog fits a person’s lifestyle. If you have cats, you need a pit bull that gets along with cats. There are also a lot of questions during the adoption process. How many kids do you have? How active is your household? Do you have a yard? The answers to those questions will determine which dog may be a good fit for you, your family and your home. “Some dogs I don’t require to go to a fenced-in yard, but there’s some dogs that yes, you have to have a yard. So, it’s really just going over what your lifestyle looks like, what your day looks like, what you can handle and what will work for you.”

The most important thing after getting the dogs out of the high-kill shelters is finding them a proper and fitting home so that Triple C can keep available space for new dogs and continue its mission. For more information, photos, reviews and to contact Chelsea about adoption, visit facebook.com/TripleCPitBullRescueofCentralFL or email Chelsea at triplecpitbullrescue@gmail.com to set up a visit.

While pit bulls are excellent pets for some, they’re not right from everyone. Make sure to do your own research about pit bulls and any breed of dog you may be interested in before deciding to adopt.