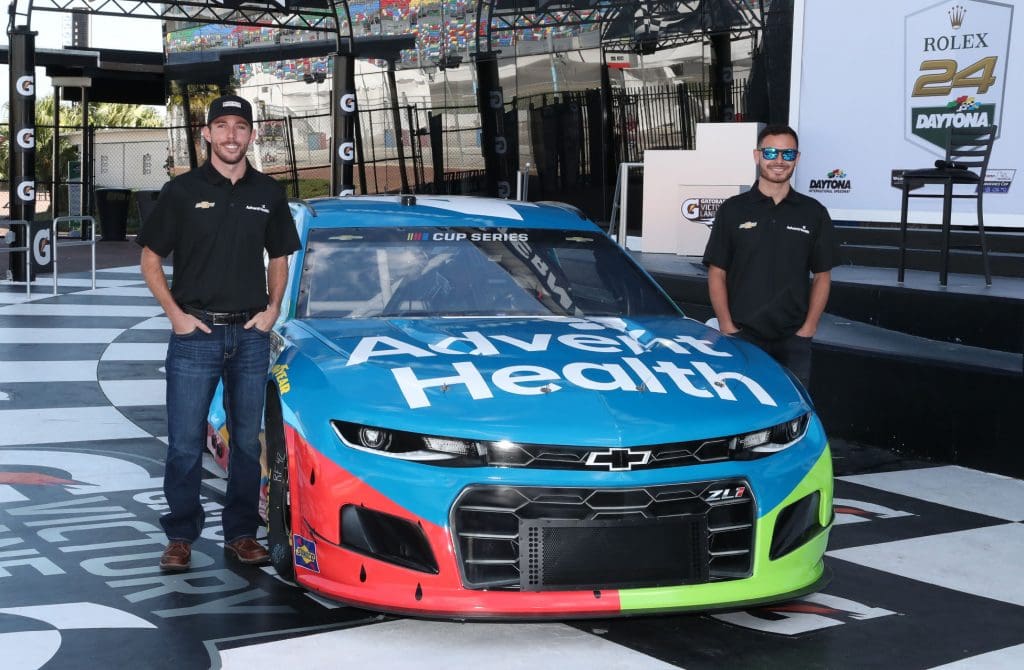 With its show car on display Thursday in the Gatorade Victory Lane at Daytona International Speedway, AdventHealth announced it is expanding its relationship with Chip Ganassi Racing by teaming up with drivers Kyle Larson and Ross Chastain.

During the 2020 season, Kyle Larson will pilot the No. 42 AdventHealth Chevrolet Camaro ZL1 1LE for the Clash at Daytona, as well as the NASCAR Cup Series playoff race at Kansas Speedway in the fall.

In addition, Florida native Ross Chastain will drive the No. 77 AdventHealth Chevrolet Camaro ZL1 1LE, prepared by CGR, for starts at the Daytona 500 and the Coca-Cola 600 at Charlotte Motor Speedway in North Carolina, a news release states.

“We’ve been a proud supporter of Chip Ganassi Racing since 2016, and I’m really excited to further expand our winning partnership by teaming up with both Kyle and Ross,” David Banks, AdventHealth chief strategy officer, says in the release. “This collaboration is something all of our employees across the nation can get excited about.”

AdventHealth previously had a presence on the No. 1 car, racing in the 2019 Clash at Daytona with Jamie McMurray, and with Kurt Busch’s entry in the 2019 fall race at Kansas, in addition to sponsoring Kyle’s All-Star Race winning ride.

“We had a great run with Kyle last year and are excited about the 2020 season,” David says. “In our first race on Kyle’s car, he not only raced his way into the NASCAR All-Star Race, but also went on to win it. We are looking forward to continuing that momentum and success together in 2020.”

“It’s great to have AdventHealth back with the No. 42 team for some races in 2020,” Kyle adds. “It was awesome to win with AdventHealth on our car at the All-Star Race, in their first race with the 42 team, and I hope we can have more exciting races with them this year. They have been a great partner, on and off the track, and I’m glad to see our relationship continue.” 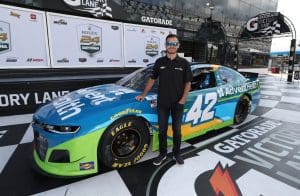 Kyle Larson with his No. 42 AdventHealth Chevrolet Camaro ZL1 1LE.

In 2020, Kyle will compete in his seventh full-time season in the NASCAR Cup Series. He has more than 325 starts in NASCAR’s top three divisions, with a total of 21 victories, 14 poles, 113 top-five finishes and 183 top-10 finishes.

The 2014 NCS Rookie of the Year enters the season after making his fourth consecutive trip to the NASCAR Playoffs and earning a career-best sixth-place finish in the final points standings. In 2019, Kyle collected two victories (All-Star Race, Dover 2), won one pole award (Sonoma), led 529 laps and totaled eight top-five and 17 top-10 finishes.

Kyle also has more than 200 victories in other series, including the World of Outlaws, All Star Circuit of Champions and all three USAC National Divisions. He also has one win in the prestigious Rolex 24 at Daytona, which he earned in 2015 while racing with teammates Scott Dixon, Jamie McMurray and Tony Kanaan.

Kyle, who is half-Japanese, is the only Asian-American to race full time in NASCAR and is the first NASCAR Drive for Diversity (D4D) graduate to earn a full-time MENCS ride and the first to win a Cup race.

AdventHealth also will support Ross, who continues to be a CGR development driver, in a Spire Motorsports entry as he makes his second career Daytona 500 start, following a 10th-place finish in last year’s race. 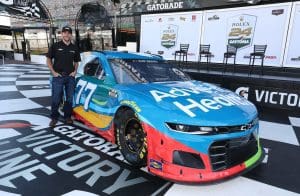 Ross Chastain with his No. 77 AdventHealth Chevrolet Camaro ZL1 1LE.

Ross will juggle his CGR starts with full-time duties in the NASCAR Xfinity Series in 2020. Nicknamed “Melon Man,” he’s an eighth-generation planter and fourth-generation watermelon farmer from Alva. Ross made his NASCAR debut in 2011 at the age of 18, competing in five NASCAR Gander RV and Outdoors Truck Series events before transforming the opportunity into a full-time ride in 2012, the release states.

In 2019, Ross earned a second Xfinity Series victory while competing for championship honors in the Gander RV and Outdoors Truck Series. By season’s end, Chastain led 591 laps, earned one pole, three victories, 10 top-five finishes and 19 top-10 finishes. When the checkered flag waved at Homestead Miami Speedway, signaling the end of the 2019 campaign, Ross came home fourth, missing out on the title by a mere two points. He received the series’ Most Popular Driver Award in 2019.

“To have the opportunity to run the Daytona 500 is awesome, and it’s great to do it this year with AdventHealth on board my car,” Ross says in the release. “I’ve only had one start in the Daytona 500, and can’t wait to run that race again in what I know will be a competitive car. I’m also looking forward to racing the Coca-Cola 600. That’s another iconic race that all of us want to win.”

AdventHealth continues to support the Human Innovation and Development Lab (HIDL) at CGR. The HIDL features tools, technology and unique training to improve the performance of CGR’s pit crews and drivers and help them prepare for upcoming races both mentally and physically. Headed by Josh Wise, both Kyle and Ross utilize the resources made available in the HIDL.

“With our injector at the Daytona International Speedway, we’ve been able to engage with the hundreds of thousands of race fans that attend Speedweeks, but are beyond thrilled to have an AdventHealth car racing in the Daytona 500 for the first time ever,” David says. “I can’t wait to watch Florida’s own ‘Melon Man’ race on the track this year in our watermelon-themed AdventHealth Chevy.”

“We are thrilled to be continuing our partnership with AdventHealth for a fifth year,” Doug Duchardt, CGR chief operating officer, says in the release. “The partnership has generated some exciting moments on track, like Kyle’s All-Star win. Additionally, AdventHealth’s dedication to helping people feel whole has aided the growth of our drivers and pit crews off the track through the Human Innovation and Development Lab. We’re looking forward to another exciting year of the partnership.”